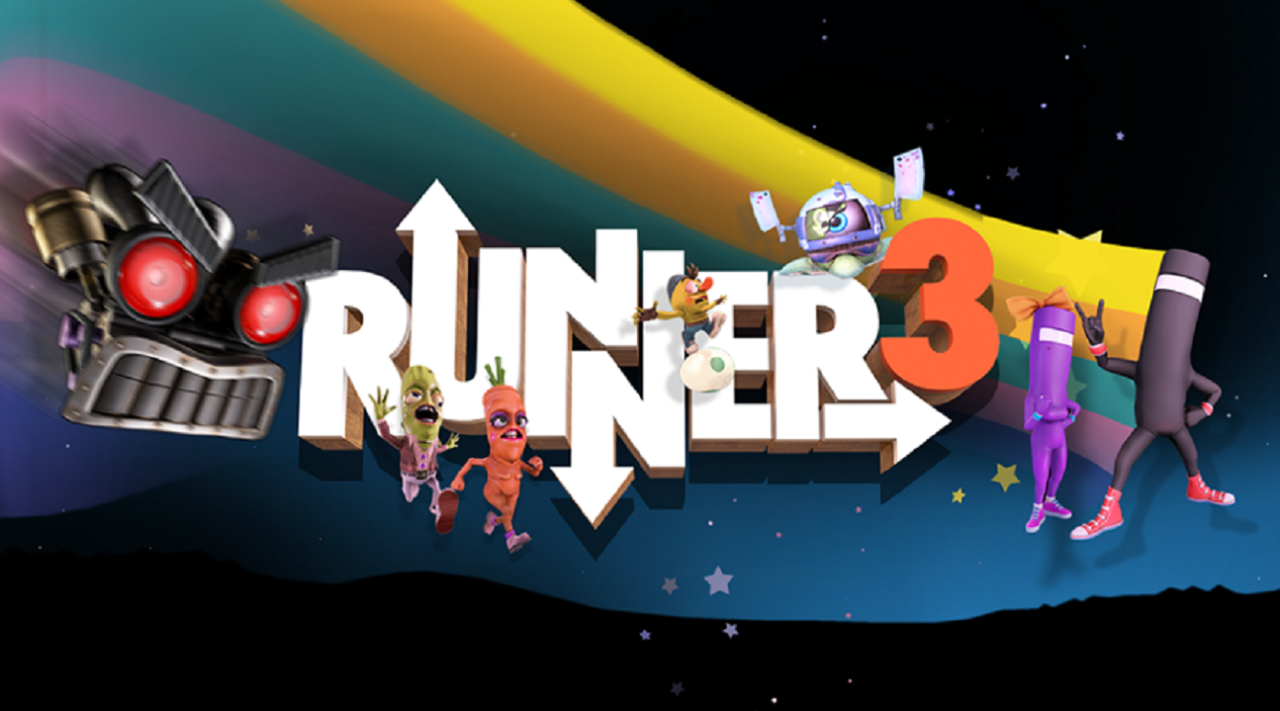 The latest, but not the greatest

Another Bit.Trip game is never a bad thing, even if Choice Provisions has shortened the title to just Runner3. The sequel to one of my favorite Wii U games (and critical darlings) you might expect Runner3 to be a sizable leap over its predecessor, or at the very least, to maintain the series’ high standards. However, the overall package here proves a mix of some curious design choices. This is still a pretty good game overall,  but viewed solely as a sequel, it feels a step backward in several ways. 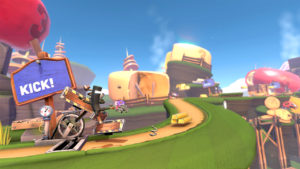 My challenge is to try and keep my expectations for this title in balance. Not everyone has played Runner2, nor has everyone followed the dev logs for this sequel. So bear with me while I attempt to discuss Runner3 within the series, while also trying to treat it as a standalone game.

Initially, the rhythm-music gameplay seems similar as CommanderVideo jumps, slides, and kicks his way through each imaginative stage. Returning players will be at home, and new ones will find the proceedings fun and intuitive. However, you’ll soon discover that a moderate learning curve is not to be. Runner3 has an extreme difficulty almost from the start! Choice Provisions have stated in interviews that they actually feel this game is easier than its predecessor. I suppose if I’d been playing this game for five years I’d probably feel similar, but it’s certainly not an opinion shared by the majority of fans experiencing the game for the first time. To quote Sir Stromming, “I like to think they died doing what they loved, though. It isn’t true, but I still like to think it.”. 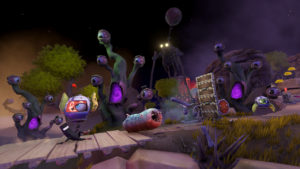 That said, high difficulty alone does not necessarily a deal breaker make. Thankfully, that’s the case in this instance. Eventually, I found myself at Runner3’s final boss, after several hours of frustrating fun. At its very best, Runner3 makes you feel like a gaming superstar, as you zip through each stage with Jedi-like reflexes. At its worst, the difficulty feels unbalanced. There are a few key reasons why.

For one, these stages are l-o-n-g. That should be an awesome thing, and in certain ways it is. But, you still only have a single checkpoint, so you better enjoy replaying sections repeatedly in stages that are probably a bit too lengthy for their own good. An aside, longer stages means fewer worlds here – only three – which is a real letdown after such a long gap between entries. 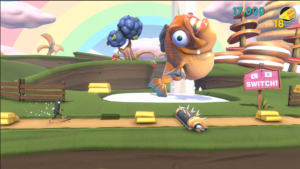 Another reason stems from having fewer options. Runner2 let you pick difficulty settings, and for each stage no less. That thoughtful inclusion is inexplicably gone. The devs have tried to explain why this is actually a good thing, but their reasoning misses the mark with me. It’d be one thing if I hadn’t experienced it prior, but I already know how nice it is to play a Runner game with my choice of difficulty. Why is it ever good to take away existing options from players?

Thankfully, Choice Provisions have come to a realization, albeit late, and are listening to fan feedback by adding an easier mode. This will certainly benefit them, as a narrow audience will be able to widen. I  can imagine many players quitting Runner3 early, which is a shame. The game is fun and satisfying, with high production values, and lots to discover. 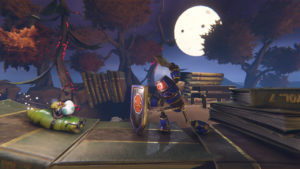 For those not easily beat-down by games, Runner3 offers several new things to tempt series fans. Vehicles are probably the biggest, and it is kind of cool to see all the ones on offer. They do leave me with the feeling of having less tight control though, so at the end of the day I can probably take them or leave them. Hero Quests, where you find characters off the beaten path who asks for hidden objects in specific levels, are stronger insofar as they encourage replay. This is an area where the Runner games have always been excellent. It seems like there’s always something to discover with each replay. Retro stages are also back, but now they give free movement, playing more like a traditional platformer. While this isn’t the devs’ forte, I’m excited by the possibilities it presents. Plus, the free movement does make me feel like failure here is more my fault than that of the game’s.

Why would I ever blame a game for my failure? Camera angles! The camera for Runner3 makes for some wonderful visuals, but sometimes they come at the expense of gameplay. Having the camera directly behind CommanderVideo, or zoomed in tight on the hero, can make it quite tough to gauge where you are in relation to your surroundings. The margin for error is so thin in parts that this is really key. Add in elements like dropping platforms, obscuring fog, etc. and you’ll find it’s not just a matter of reflexes and rhythm, but also some memorization resulting in trial and error. This is a very good looking, whimsical game, but all the details and touches have the potential to distract. I should note that I played the bulk of the game away from my television, and without issue, so reports of borderline playability seem to be from the framerate highbrow crowd. 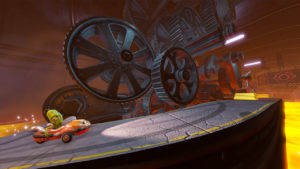 On the audio end, the soundtrack is pretty good, but not great. I don’t find the tunes as catchy as those prior, but I give credit that the additional diversity on offer is definitely noticeable. There are some remixes of older tunes. Charles Martinet is in fine form once again with his narration. When you find yourself wishing there was more of something, it shows you how good that something is. Kudos to the voice of Mario.

Runner3 is a game that, in many ways, has taken one step forward while taking two back. One of its biggest alterations was an area that needed none, difficulty. Many of its newer additions have left me feeling rather indifferent. Still, I commend Choice Provisions for not resting on their laurels. Runner3 is still entertaining with its brand of frustrating (at times discouraging) fun. It’ll keep me playing to improve my stats and unlock more goodies. Still, I do recommend playing the prior games first, if you haven’t already. Get a feel for them, and you might be tempted to grab the cool physical edition from Nicalis with neat extras.

Runner3 is a game that, in many ways, has taken one step forward while taking two back. One of its biggest alterations was an area that needed none, difficulty. Many of its newer additions have left me feeling rather indifferent. Still, I commend Choice Provisions for not resting on their laurels. Runner3 is still entertaining with its brand of frustrating (at times discouraging) fun. It’ll keep me playing to improve my stats and unlock more goodies. Still, I do recommend playing the prior games first, if you haven’t already. Get a feel for them, and you might be tempted to grab the cool physical edition from Nicalis with neat extras.