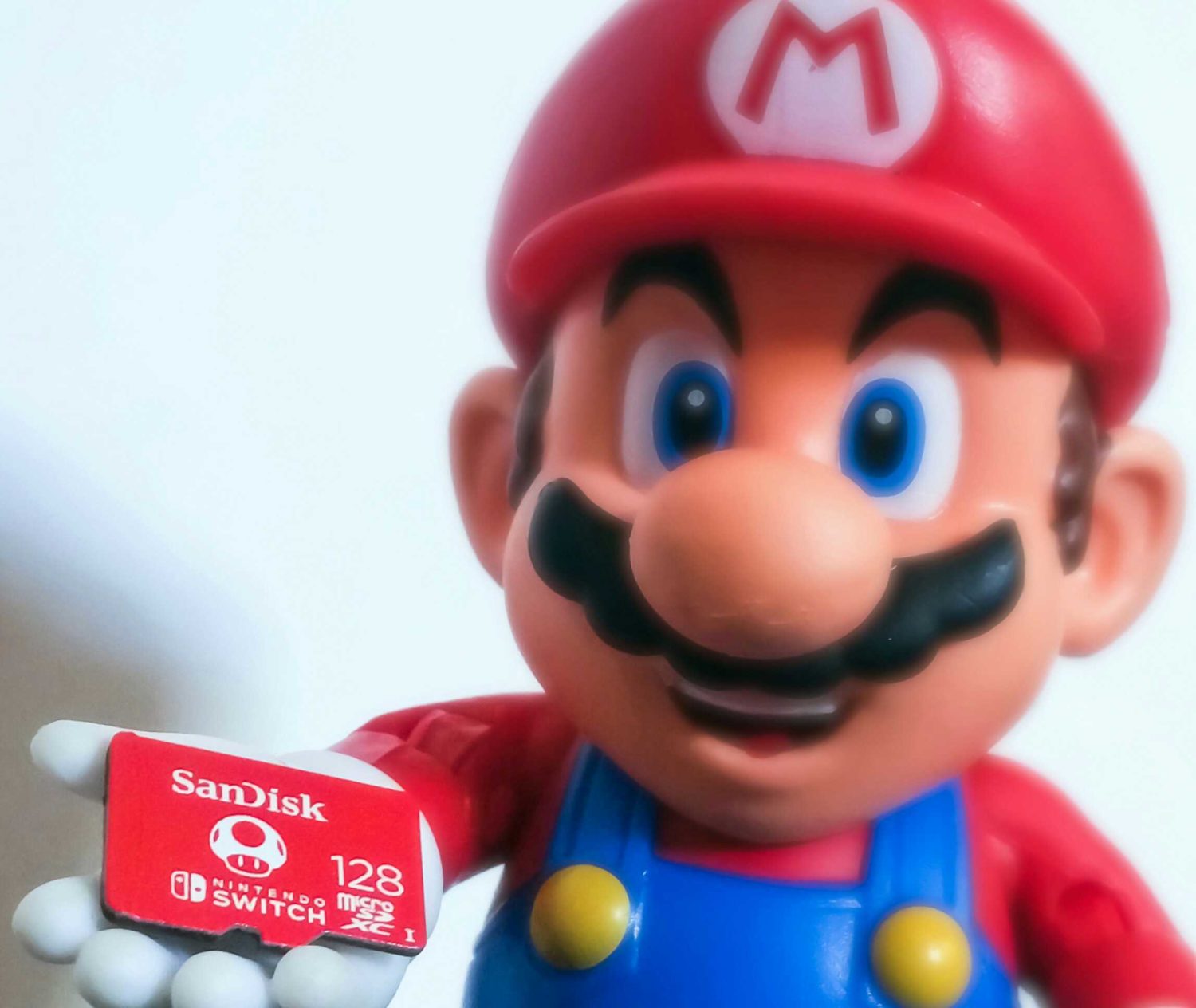 Physical video games are becoming a thing of the past (sadly). Oddly enough, we’ve had to revert to the old days when we used these things called “memory cards”. Now, your system comes with a set amount of memory (not much) and you have to work with that. Unless you buy a micro SD card of course. These have almost become a necessity with the ever-growing library of games, and the amount of GBs (gigabytes) you need to download them, not to mention DLC, updates and whatever else the developers want to throw in there. If you are like myself and have had to continuously archive and then re-download games to save space, then you know what I mean. Luckily for myself and fellow PNM team member Heath Zimmerman, we were asked to review the 128GB Nintendo Switch SanDisk Micro SDXC card. Below you can check out our opinions and experiences with this slick, “Mario red” SD card, along with all of the product details and some close-up pics. 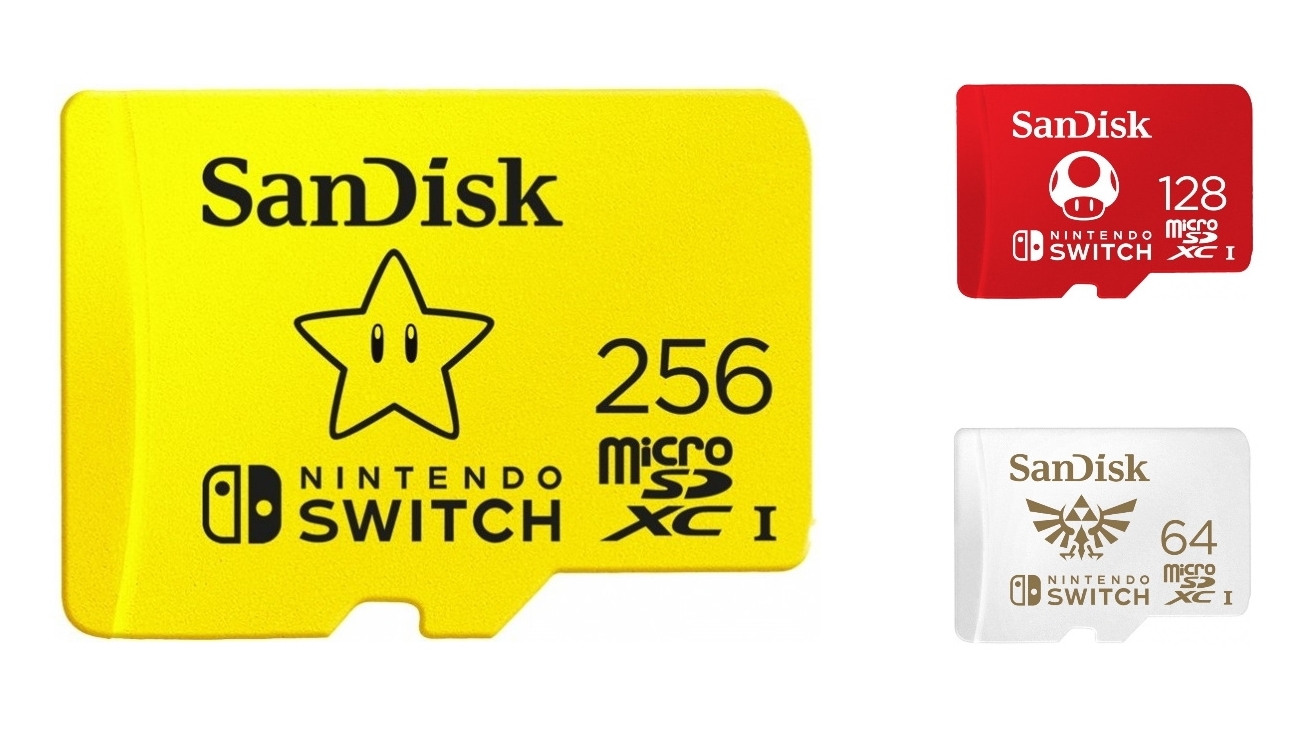 Kaelyn: When I was asked to review this SD card I said ‘yes’ immediately. I’ve needed more space on my Nintendo Switch since I bought it. Games are so BIG, so many GB, so many downloads! It felt like I couldn’t catch a break. The worst part was, when friends would come over and ask to play specific games and I had to tell them if they wanted to play “Mario Kart” they had to wait like an hour for it to download again (ain’t nobody got time for that). So when I popped this beautiful, 128GB micro SD card into my Switch, the first thing I did was go to the eShop and re-download almost every game I had previously purchased. I was absolutely amazed that they all fit. Not to mention, red is my favorite color so I was more privy to this version than the original black 32GB micro SD card that I got for Christmas last year. It also couldn’t have arrived at a better time. I’m currently reviewing the Borderlands Legendary Collection for the Switch and without this 128GB card I would have had to play the first one, delete it, play the second one, delete it, you get the picture. So for me this is great! I would have just stuck with the 32GB micro SD card but now I feel a bit spoiled ha, and it’s so pretty. My favorite version is the Legend of Zelda design. It has the lowest amount of memory, but… ZELDA! Truthfully though if you’re going to buy more memory I recommend going for at least the 128GB. However if you download like, A TON of games then checkout the 256GB version instead. 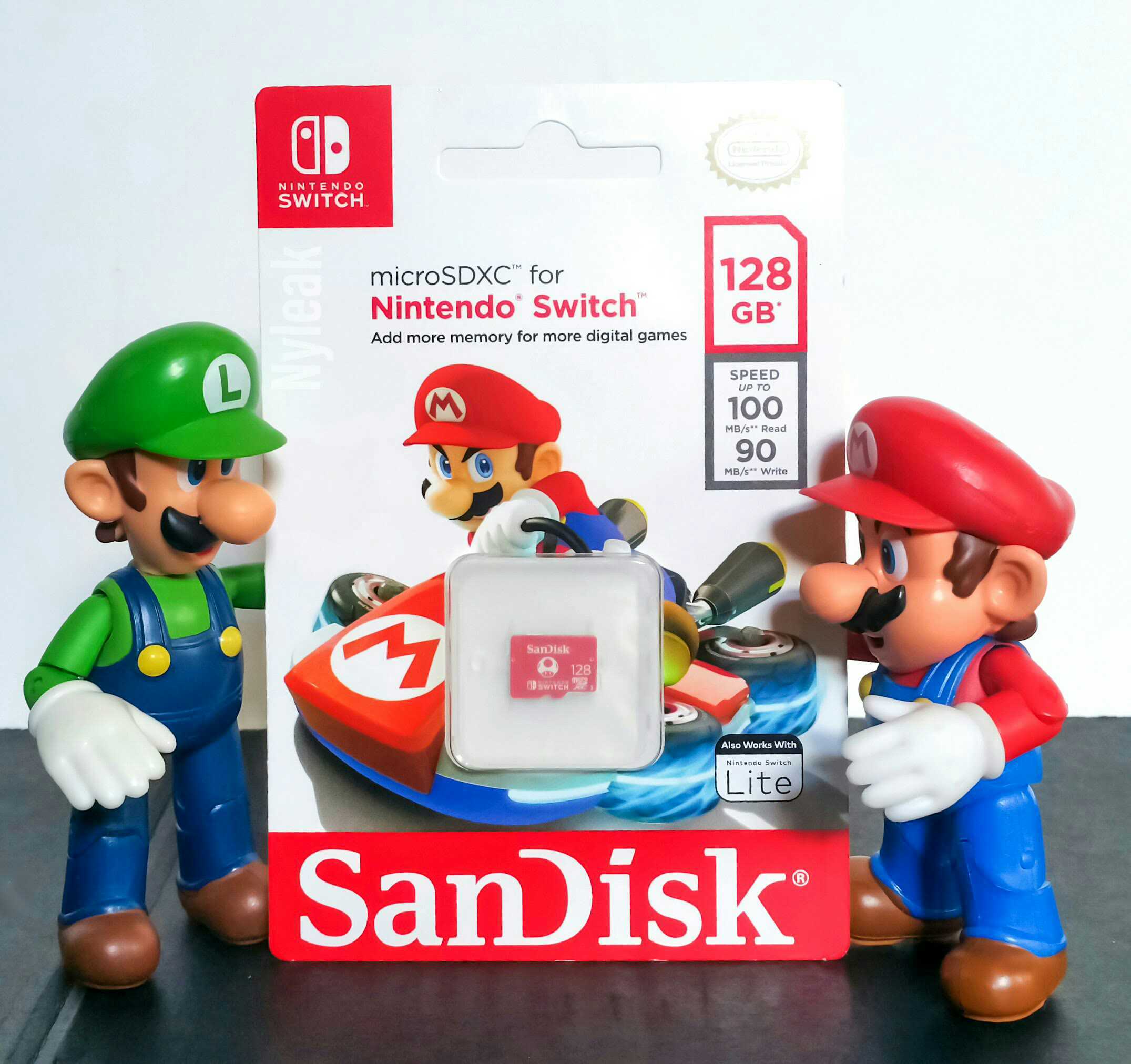 Heath: When it comes to Micro SD cards for your Nintendo Switch, decisions have to be made. At one point I had a 200GB micro SD card for my Switch and it ended up dying on me (how, I am unsure). So I decided to switch to the SanDisk 128GB Micro SD card. When I received this new Nintendo Switch MicroSD card, the first thing I noticed was how bright it is compared to the SD card I was using. My previous SD card at the time was black with a white Switch logo, which honestly felt kind of bland. Since then I have also purchased a Switch Lite; which came equipped with another “bland” 32GB SanDisk MicroSD card. But as you can see from the pictures, the mushroom and the vivid red color on this new one, is undoubtedly a solid look. Much better than the basic version. I don’t own the 64GB Legend of Zelda card or the 256GB Super Star card, yet anyway, but I can say that all three look absolutely amazing. The only problem is, they’re hidden within the console so you can’t enjoy the aesthetics. 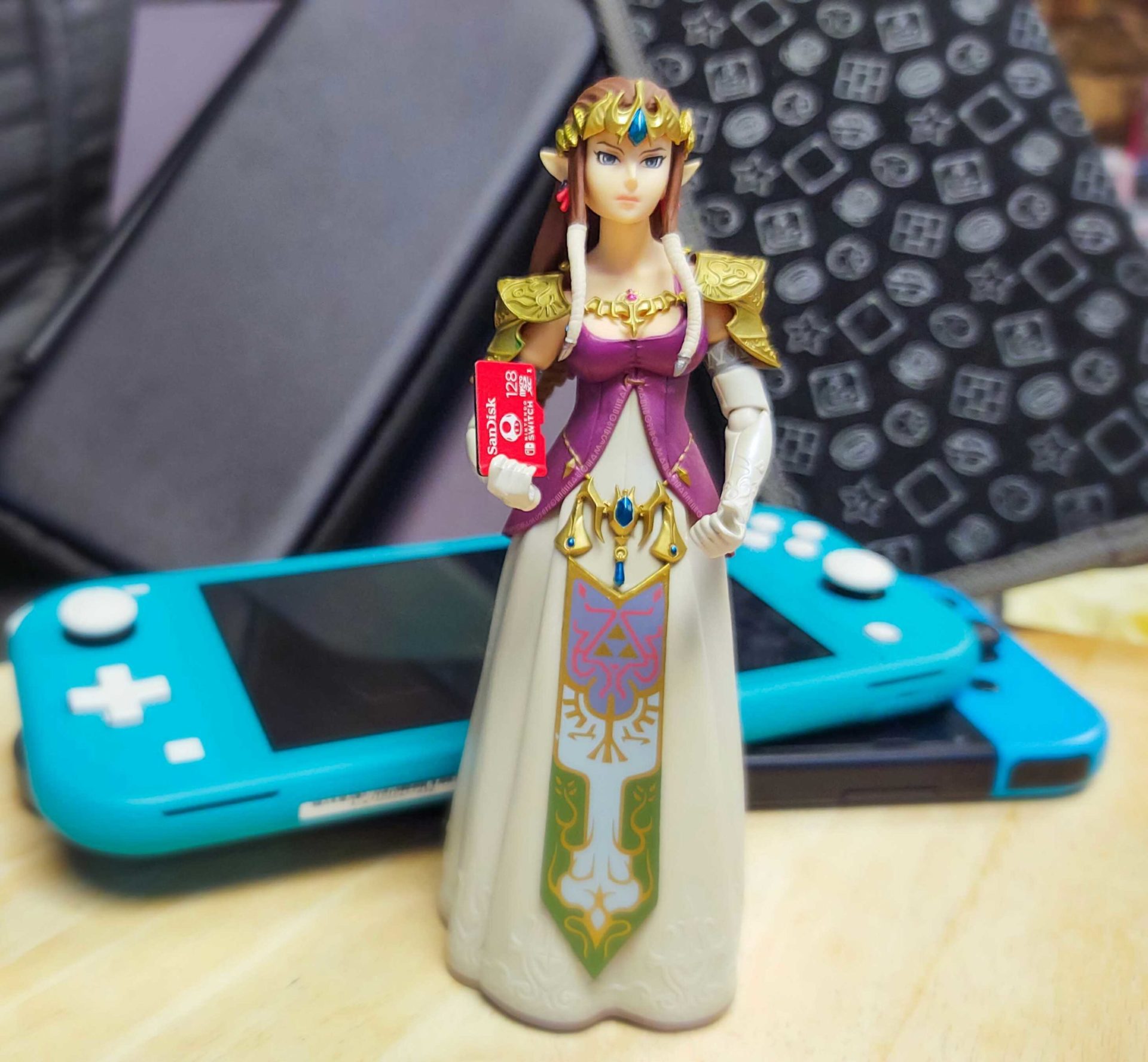 Nintendo®-Licensed for Nintendo Switch
The SanDisk microSDXC card for the Nintendo Switch game system is designed to provide dependable storage as you conquer new levels.

Room to explore
Add up to 256GB of storage to your Nintendo Switch in a matter of seconds, and rest easy knowing you have room for your favorite games.

Get in the game fast
With transfer rates up to 100MB/s, the SanDisk microSDXC card for Nintendo Switch delivers consistent high performance, so you can load games fast.

Store more, carry less
With the SanDisk microSDXC for Nintendo Switch, you’re able to keep your favorite digital games in one place so you’re ready for game time anytime. 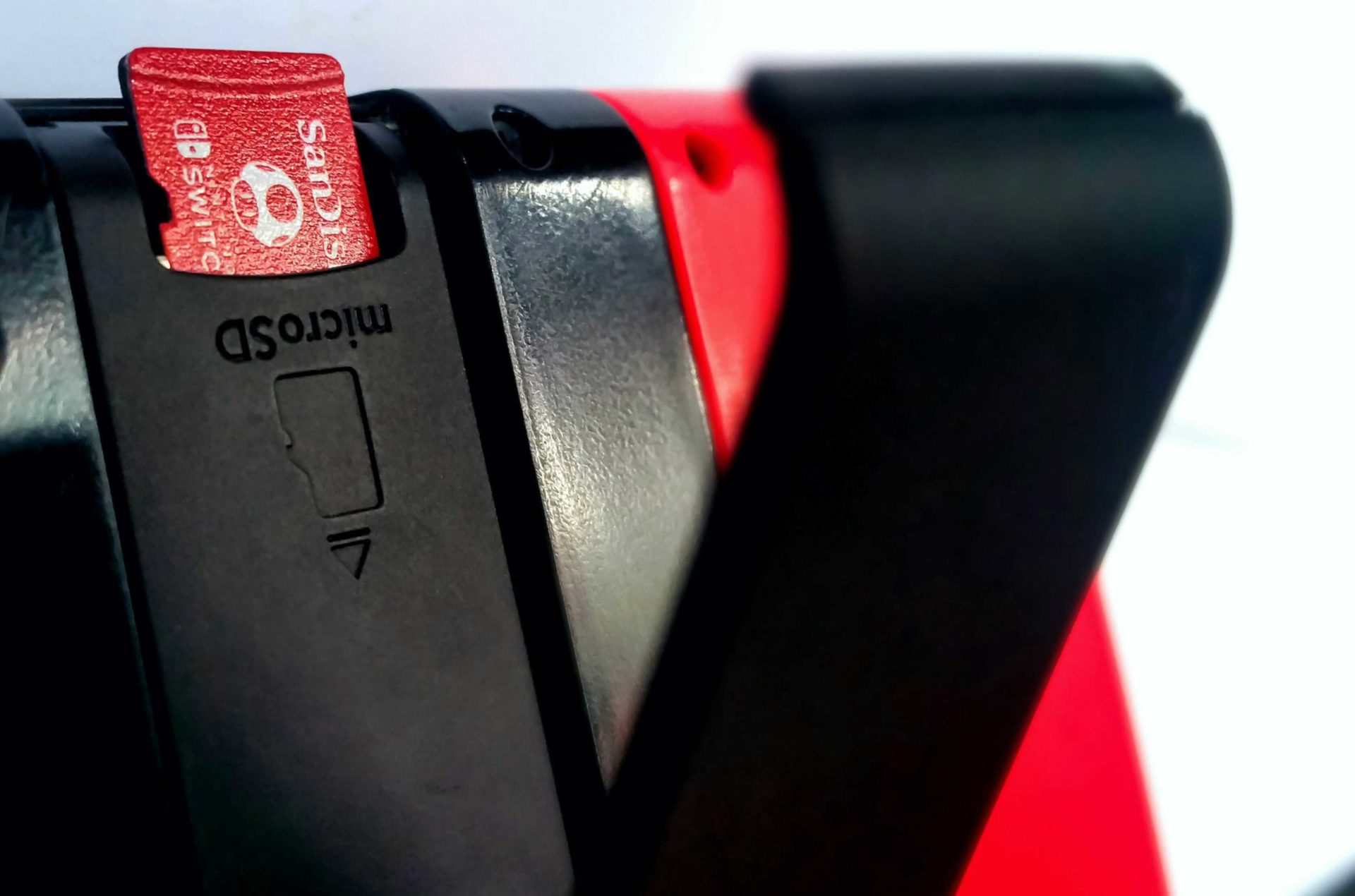 Hello! My name is Kaelyn, and I LOVE Nintendo! I can't remember a time when I didn't play video games. Growing up with 3 older brothers it was hard to avoid them. Nintendo was always something that put me in a good mood, or taken me away when I needed a break from reality. My favorite series is the Legend of Zelda! I've always been into drawing Nintendo characters and seeing other people's video game themed art. I have a dream of one day meeting the great Shigeru Miyamoto, and one day working for Nintendo (Don't we all).
Top
Posting....