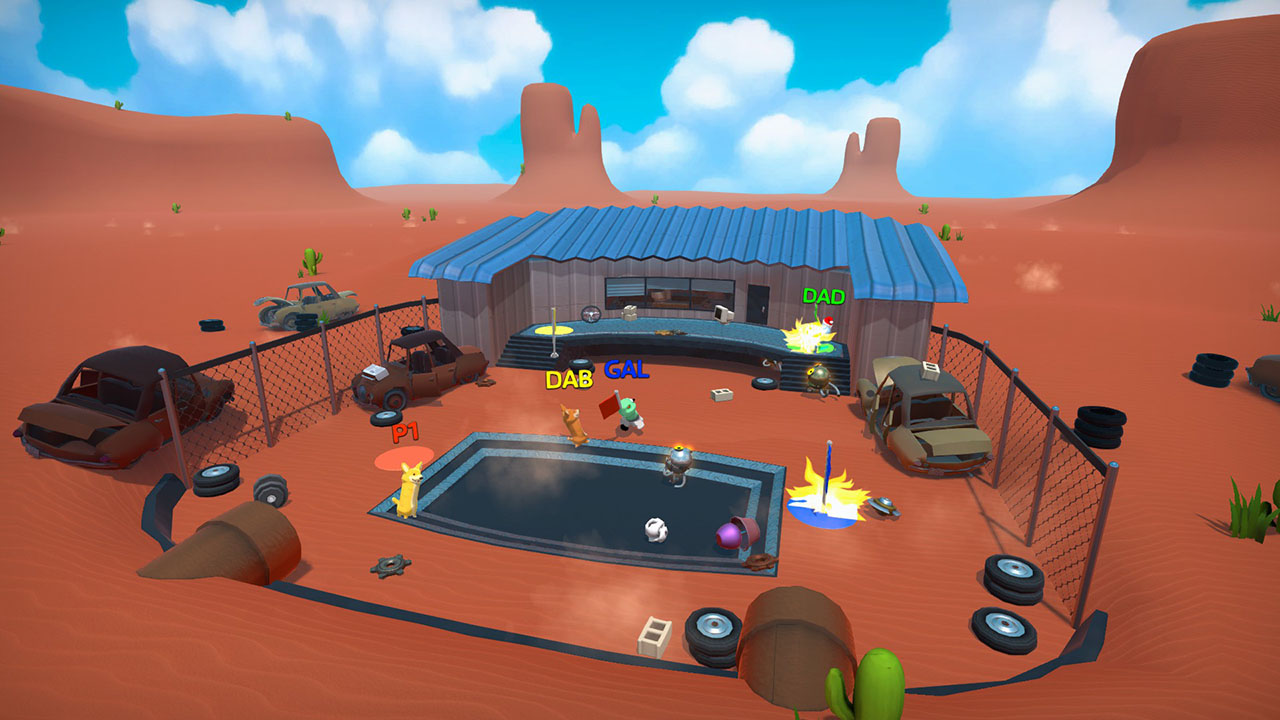 In Sausage Sports Club you play as floppy animals in sports-themed game modes.

The controls are simplistic enough. The Left Stick is to move, A is to jump, A+A is to pound, and the Right Stick is to flop. Hitting Y serves as your kick/boost, while also being used to enter certain buildings and speak with the other animals. You use these controls to play in three game modes; Adventure, Free Play, and Quick Play.

Adventure is where you play three quests per day in a reality show called Sausage Sports Club. There are animals in the world with question marks above them to signal that they have a quest for you to do. Usually, during these quests, you wind up playing in one of the games. But whether you’re playing a quest for someone to accept an apology, or for someone to wear a certain hat, the outcome of the match barely changes the course of the dialogue. After playing three quests, a day is over. You play through four days and see the results of the grand finale. Adventure mode can be played with up to four players.

Free Play is where you can run around and make your own fun in the world of Sausage Sports Club or play games. And Quick Play is simply selecting what games you’d like to play. Both of these modes can play up to eight players. I didn’t care for these as much as Adventure, but I can see how they could be fun. For example, you could play hide-and-seek in Free Play with your friends. Unless you have friends to play with you, I can’t see how Free Play or Quick Play is worth playing over Adventure.

I don’t hate this game; it does have charm in its humor and quirkiness. I liked interacting with the animals and seeing their drama, which reminded me of Animal Crossing. The floppy animal design is consistently humorous, and I liked unlocking all of the skins for the characters you can play as. I also strangely loved collecting hats you can buy with coins.

However, the game struggles to not be boring with confusion, not in the instructions, but in knowing what’s going on. Unless you are wearing a different skin from one of the animals in the game, you could be playing a game with a clone of yourself. The games are also quite dull and not innovative at all. I dreaded having to play them due to their confusion and blandness. The only one I wanted to play out of was Paintball, which was simply spreading your color around the arena. The other games – Soccer, Sumo, Capture the Flag and Coinz – get too busy to tell what is going on.

Overall, Sausage Sports Club is not worth buying, especially not at its current price of $15.00. I had hoped it would be more enjoyable, but that wasn’t the outcome.

Overall, Sausage Sports Club is not worth buying, especially not at its current price of $15.00. I had hoped it would be more enjoyable, but that wasn’t the outcome.