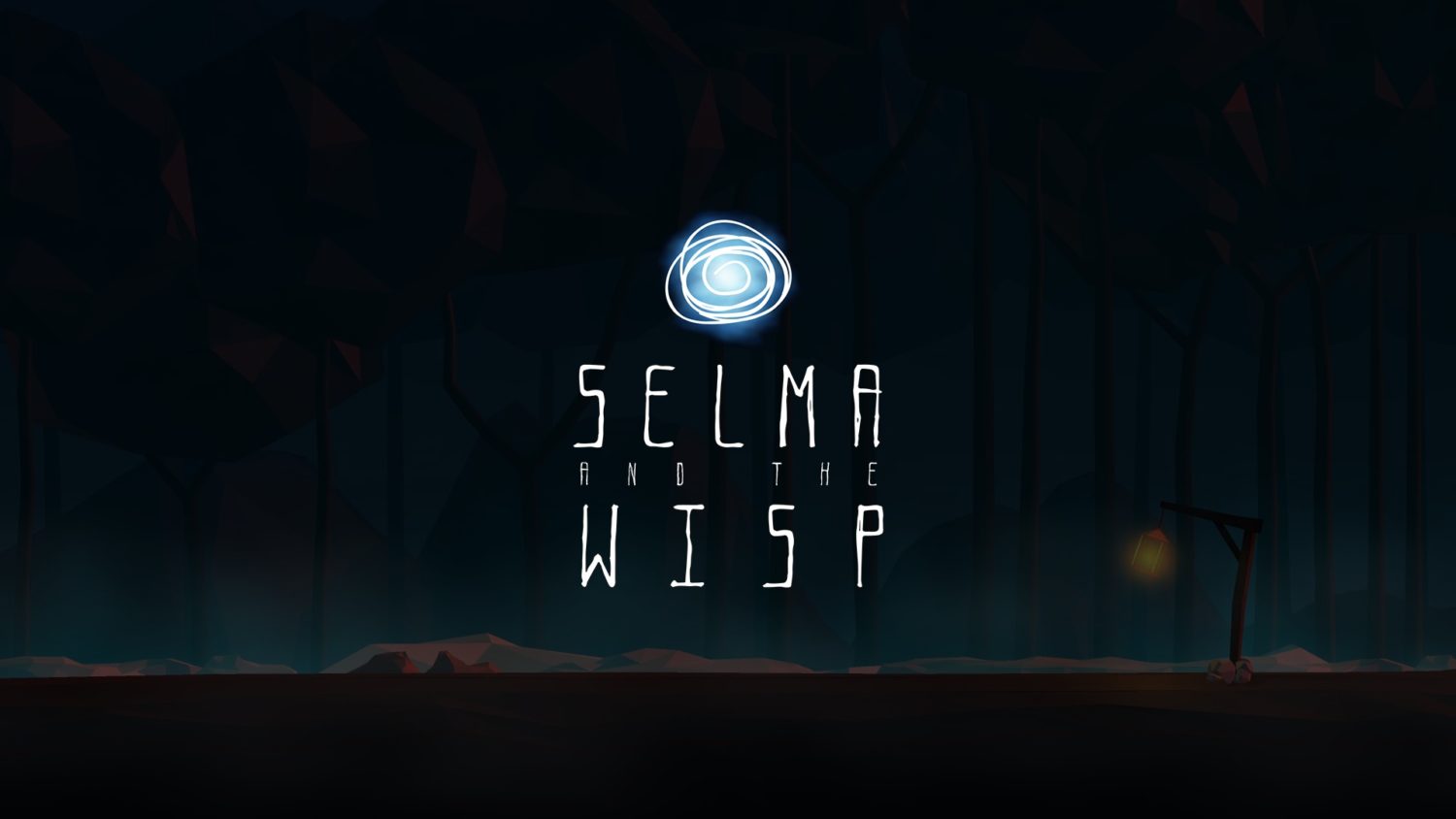 Selma and the Wisp is a beautiful, puzzle/platformer with a dark twist. Acting as her guiding light, the glowing Wisp must lead Selma through her worst nightmares and prevent her from coming to any harm. The game is short but sweet and has all the makings of a good indie adventure, especially with this trend of dark, eerie games we’ve seen lately. But is Selma and the Wisp worth pulling yourself away from those big first-party games? Let’s check it out.

Selma and the Wisp starts out like most of these games do. The story is vague and not much detail is given on the characters. It leaves some mystery for the player and lets you kind of create your own story. While I appreciate developers leaving stories open for interpretation, I prefer a good, memorable, storyline. I feel like it keeps the player more engaged and gives them something to fight for. All you know is: Selma is afraid of the dark; the dark is a very bad place; if the wisp leaves her side she will begin having a heart attack and eventually die. 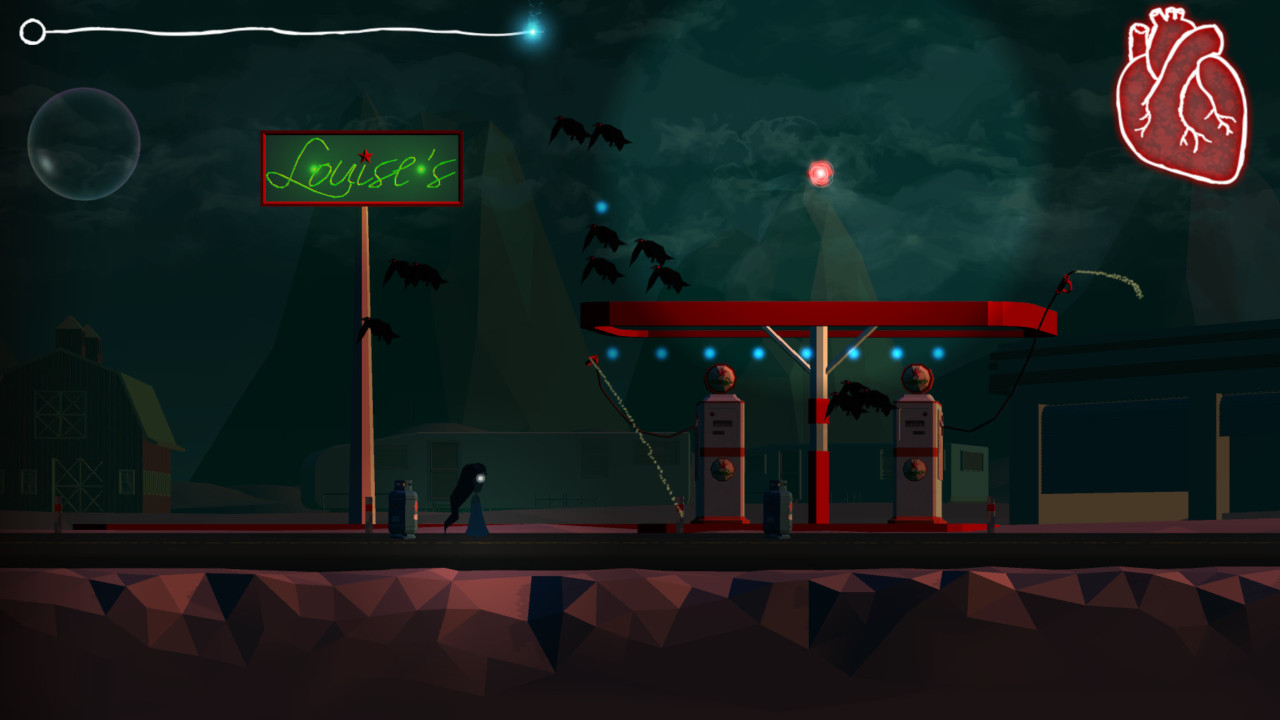 This is a different concept than most puzzle games like this. Usually a health meter isn’t something you have to worry about but the Wisp AND Selma both have them. The Wisp’s is more like an energy meter though. If you press the B button the Wisp can use an energy charge that blows some objects up or activates switches. If you use it too much, hurt the Wisp, or put it under water for too long, it will use all of its energy and die. 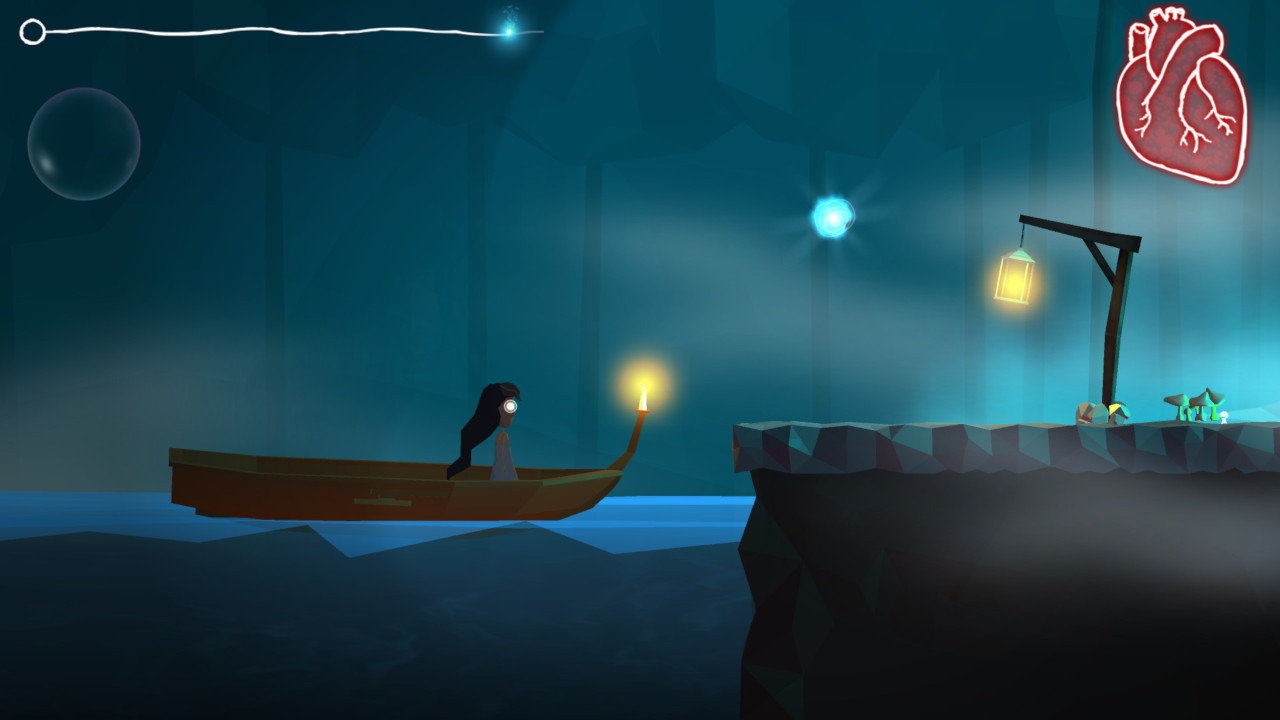 In order to guide Selma safely around the darkness the player has to be strategic in where they move the Wisp. Selma will follow you wherever it goes, almost like a cursor on your computer screen. She’s not nearly as fast as the Wisp and there’s a small bit of lag when she jumps or runs, so timing does matter. There’s a short, straightforward tutorial that will show you the few commands you need to guide her. You will come across spike pits, areas where rocks are falling from the ceiling and tons of other dangerous places. If the player cannot guide Selma across these in a safe, timely manner, then it’s game over. But don’t worry, this game is good about checkpoints and autosaving so you wont lose too much progress when you die. It’s all about trial and error. 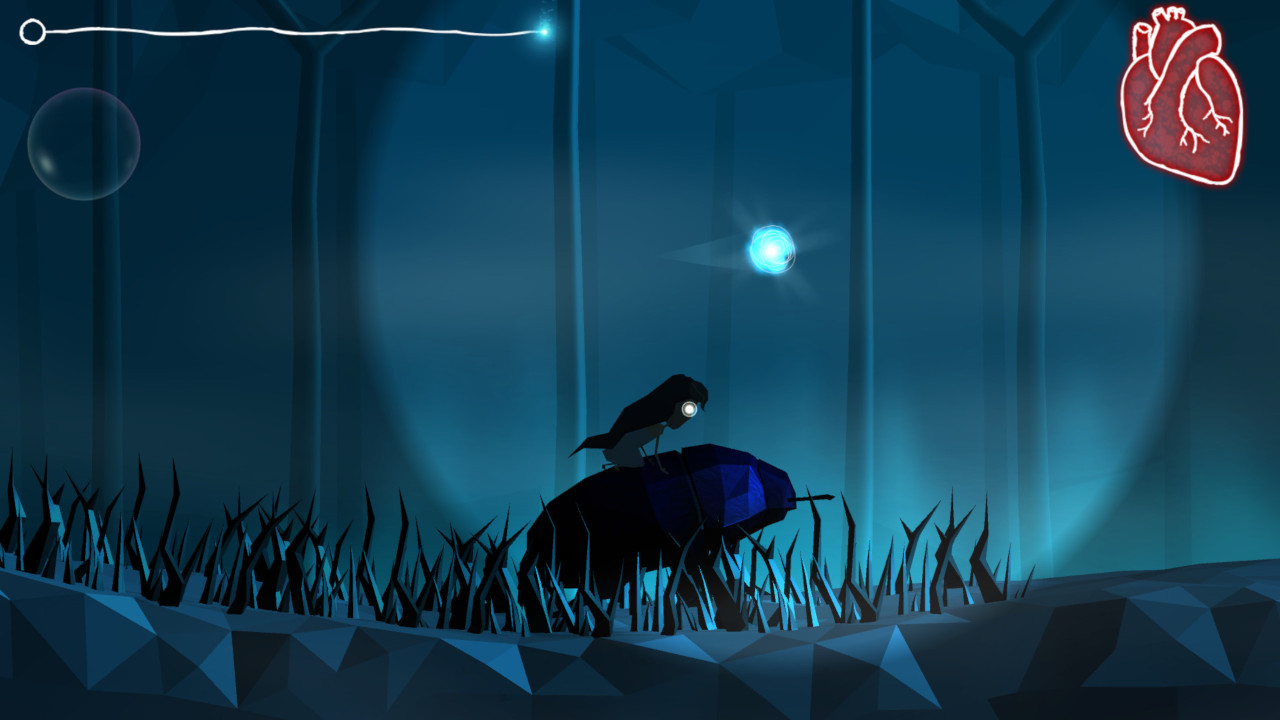 As the game progresses the difficulty does too, but it’s paced out well. I think the player will find Selma and the Wisp to be a good challenge, albeit there are a few frustrating areas to navigate around. The levels are fairly short though, so take your time going through them. If you rush, this game will take you around 2 hours to beat, which isn’t much time at all. It actually surprised me a little bit because Selma and the Wisp is $10 in the eShop and I just cant fathom spending that much on a game I can beat in one sitting. 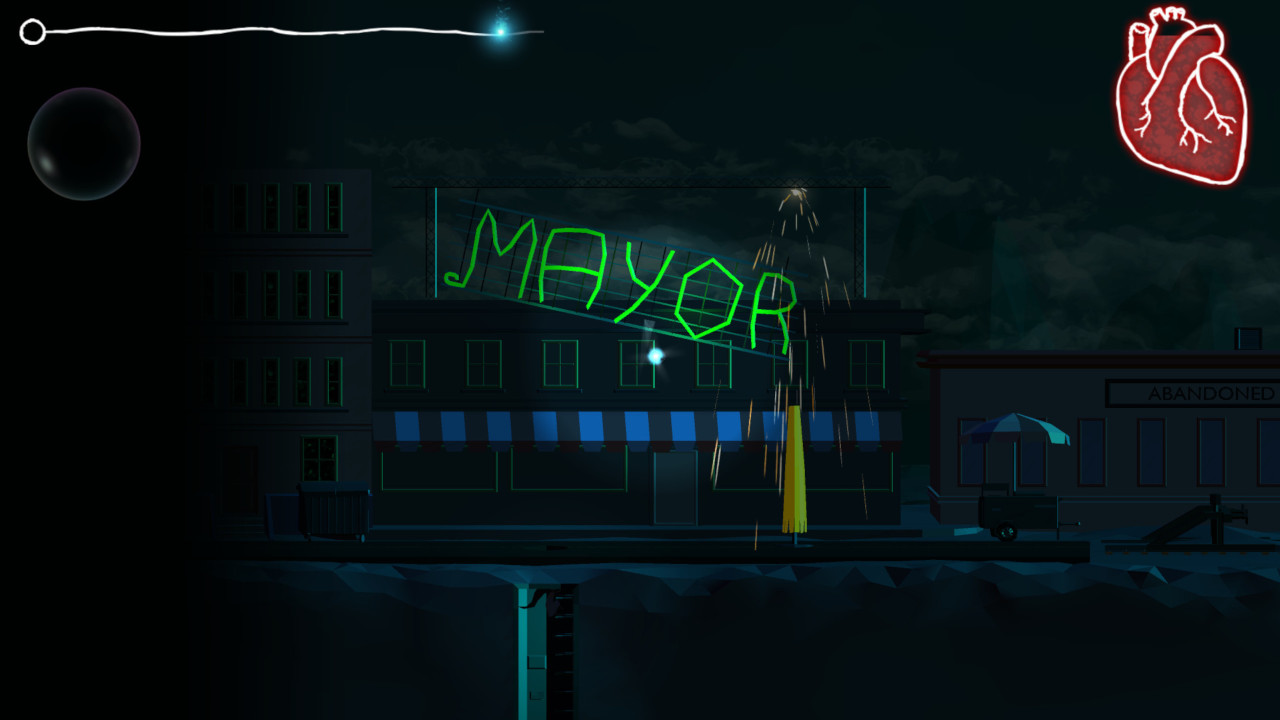 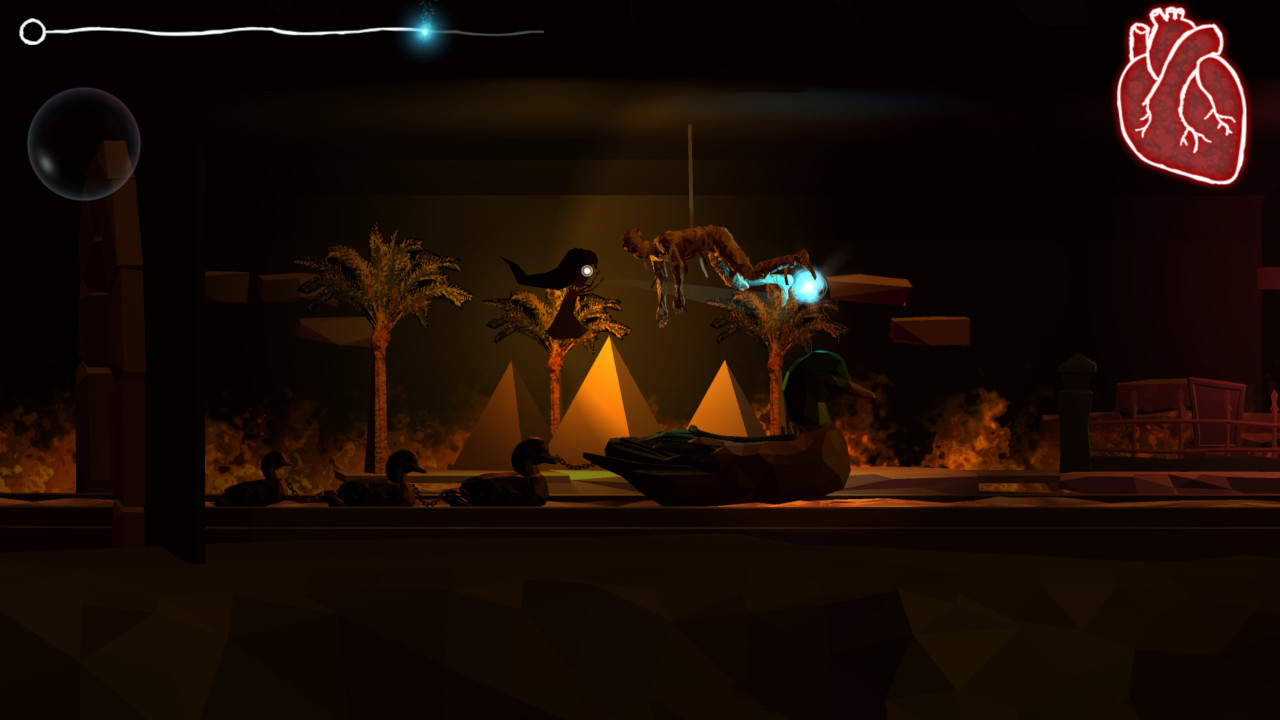 There are 10 chapters in the game. Each area gets a little more detailed and in depth. When my adventure began I was navigating Selma through dense woods and musty caves. Towards the end I was going through amusement parks and scary warehouse buildings. My favorite part of the game was the different environments and scenery that the Wisp can interact with. Even though the game lacks a a lot of small details, the graphics are good enough to pull you in and make you feel like you’re running through a beautiful, immersive storybook. It’s really neat to watch it unfold as you move forward. 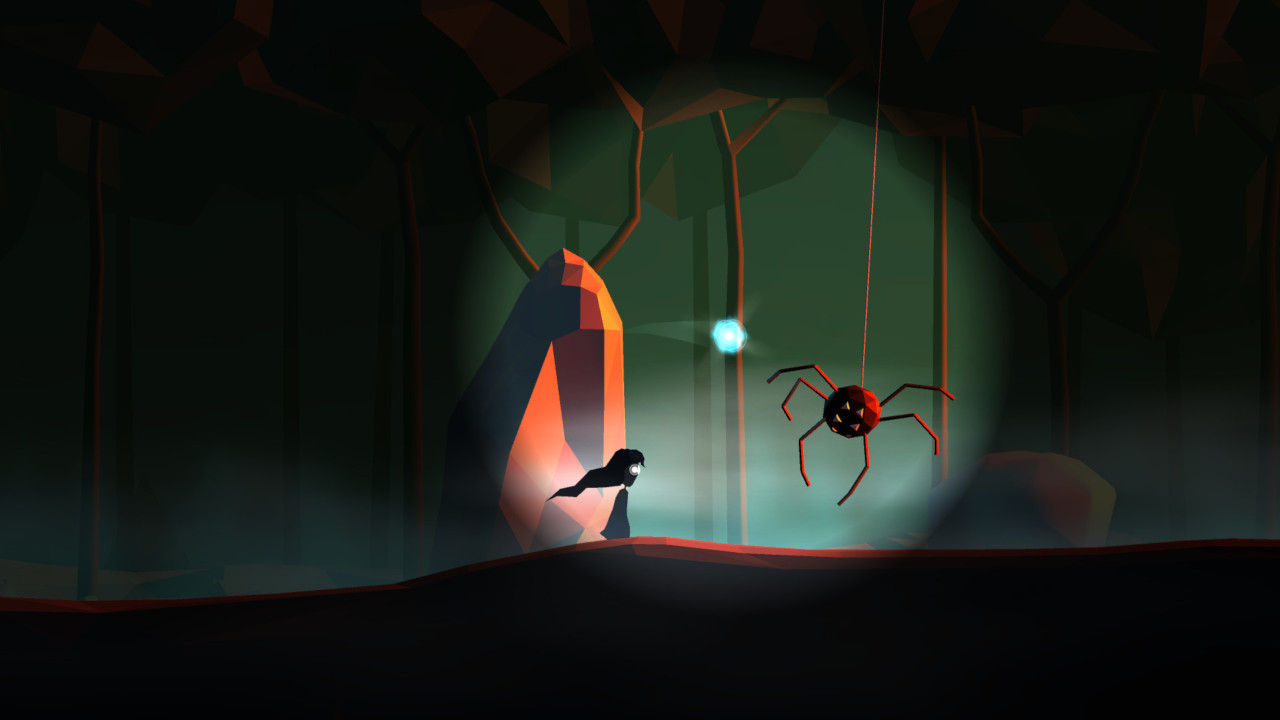 If you’re a fan of games like Limbo and Inside then you’ll definitely want to check out Selma and the Wisp. While I would have liked the game to have lasted a little longer I’m happy with my experience and I’m glad I was able to review this one. Hopefully we’ll see Selma and her Wisp again; until then, I hope this little girl can get some sleep. Check out Selma and the Wisp, available now on the Nintendo Switch eShop for $9.99.

Selma and the Wisp is a beautiful, nightmarish puzzle\platformer. While it’s a little on the short side it’s still a great game worth experiencing.