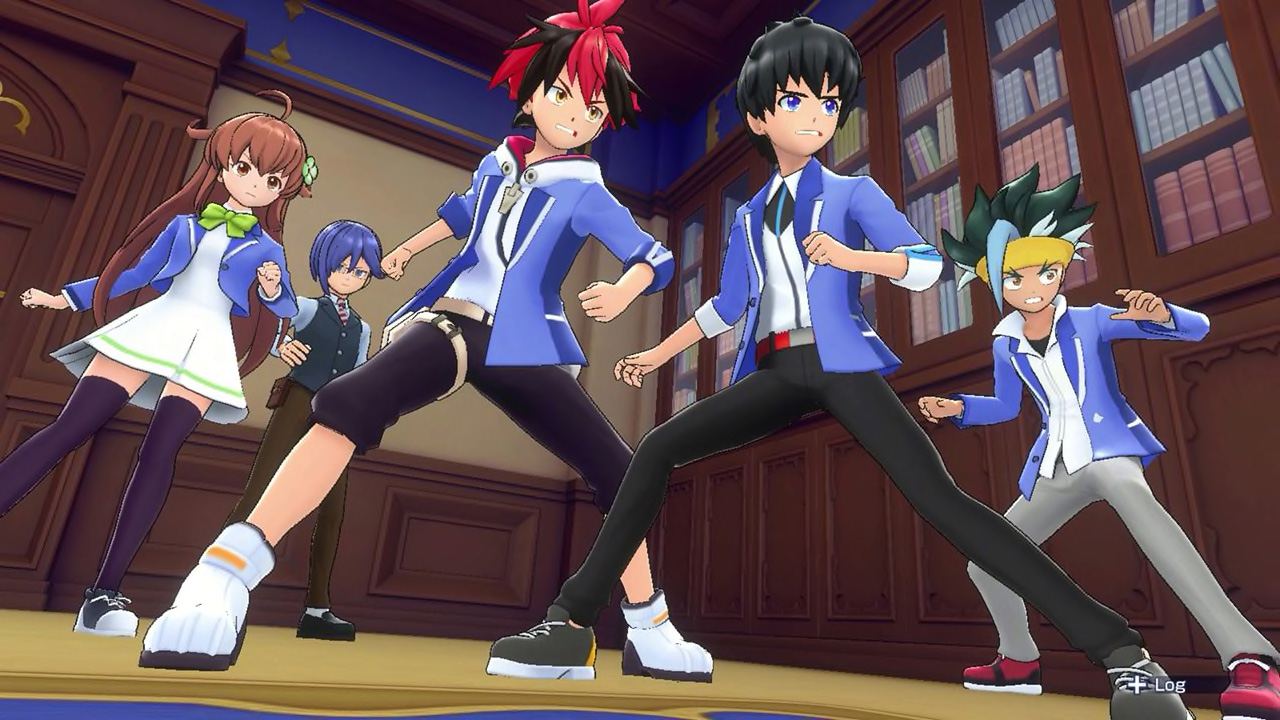 Running with the shadows of the night.

Shadowverse: Champion’s Battle is a turn-based card strategy game. A really well-done card battle game. You get the usual mechanics; it’s you vs an opponent, and you each get a stack of cards. Each player takes turns either playing or activating a card/set of cards, and the player who reduces the opponent’s “hit points” to zero first is the winner of the match. How Shadowverse goes about doing all this is the clever bit.

Before we unpack all the cards and battle stuff, let’s talk about the environment and backstory, because it is worth a look. Your character is a new transfer student at the Tensei Academy. The game starts with your arrival at your new school where you meet the student services guy, attend your first class, and get settled in your dorm room. As you get acquainted with your classmates, you learn about this game called Shadowverse. You even get to hear announcements over the school PA system admonishing students not to spend too much time playing Shadowverse…even though it’s totally awesome (the game is a bit big on itself in the beginning).

One of your new classmates tells you he has been searching all over the school for the location of the meeting place for the Shadowverse Club. He then recruits you to help look for the club, any member, or even the faculty sponsor. 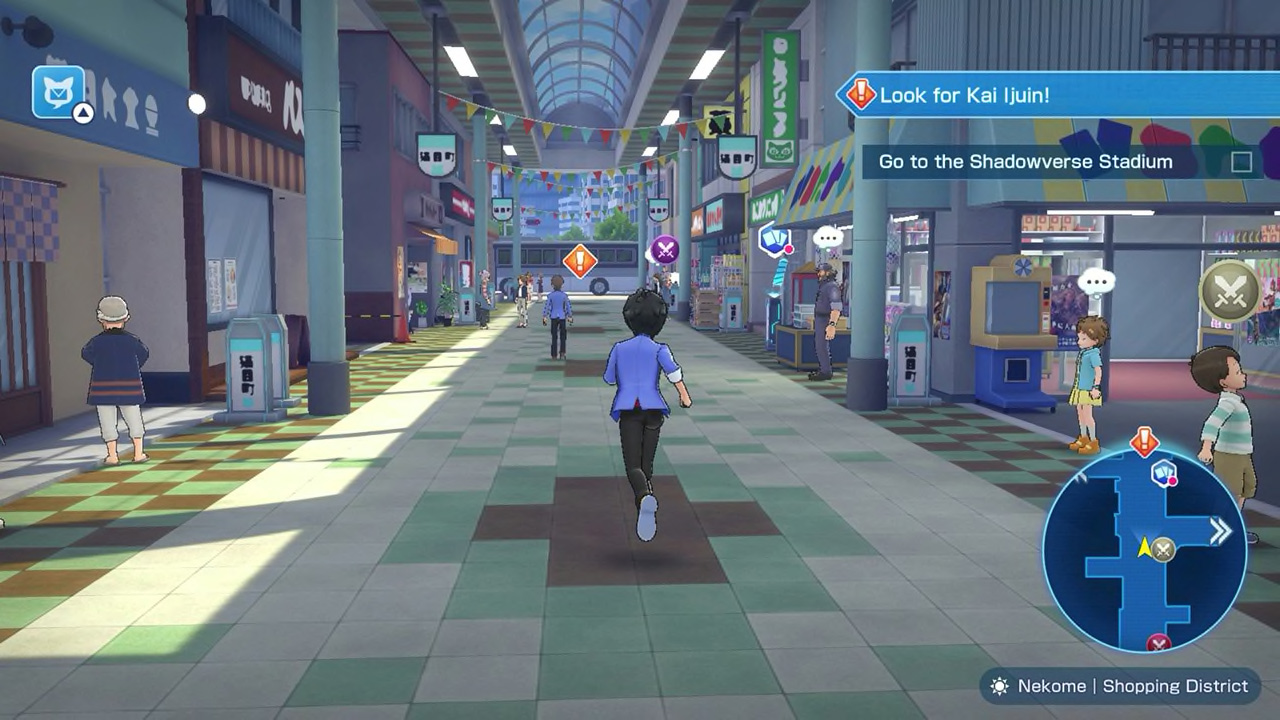 For an elite academy, some of the students are surprisingly clueless. There is one student who is sharp and determined, but she is the head of the student council and not entirely keen on this club unless they can “produce results.” Now it’s time to get to work looking for the club so you can join it and save it from being disbanded by the leader of the student council. You are the brand-new transfer student here on your first day at a new school—no pressure, right? Now that you have a mission, you get to explore the academy building’s three floors, as well as the courtyard, to find anyone who knows anything about the Shadowverse Club. And so, it begins.

The game sets up two types of environments in which the player experiences things. The school grounds are where you explore a 3D world and engage the story aspects, while the Shadowverse Showdown card battle “arena” is a 2G game board where you play the turn-based card strategy game. The 3D school environment has sufficient elements to stay interesting: classrooms, a library, students hanging around, and the like. The game’s visual theme is typical Anime; it looks pretty good overall, but some of the movements of the NPCs can seem a bit wooden or exaggerated. It’s not enough to take away from the game experience, just a bit odd given how smooth the rest of the visuals are. 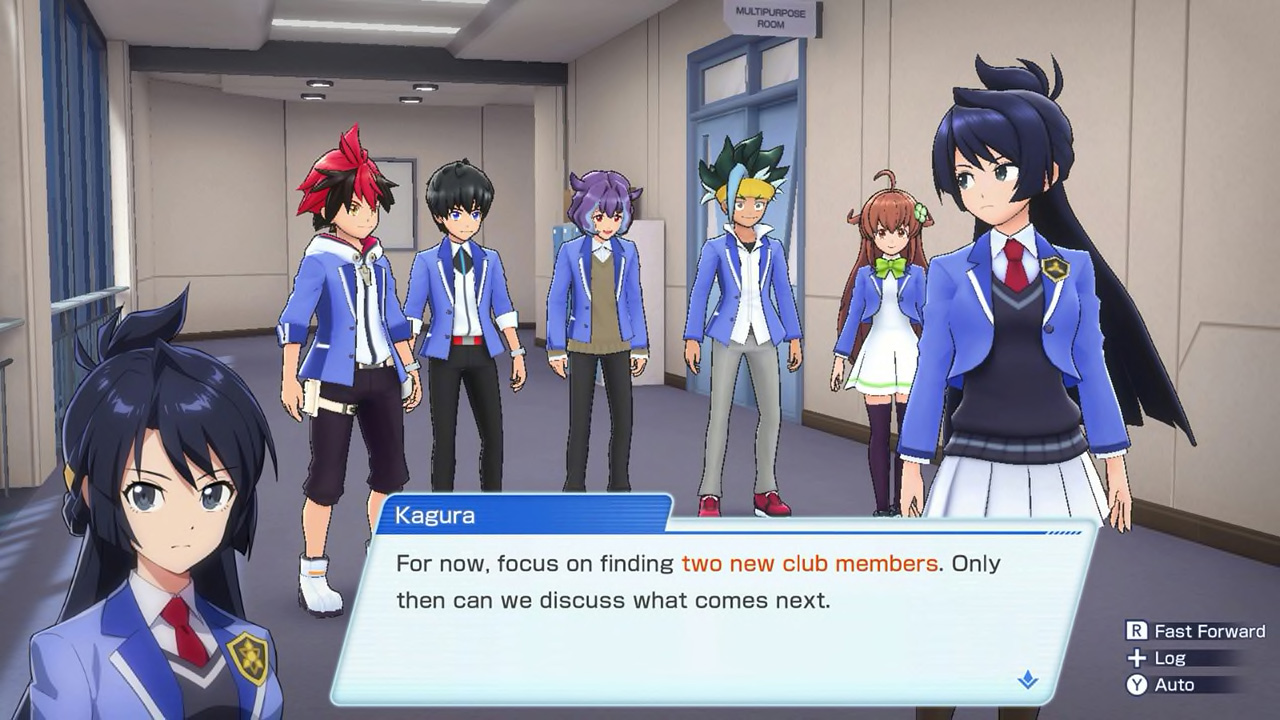 The game doesn’t have to rely too heavily on animations in the card battle arena screen, so the graphics look a little more polished.

The NPCs have voice overs for much of the dialogue, with thought balloons to read the text. The voice work is well done, and this extends to the cards as well. Yes, each card gets a voice and something to say when it’s played. The sound effects are mixed from plain sounds for mundane things like footfalls, doors, and the like, to really nice audio bits for creatures, cards, and card play sounds. There is also a background soundtrack which does a very good job of providing the appropriate feeling for what’s going on. There are different classes of card types ranging from Dragoncraft to Necromancy, each with its own soundtrack. 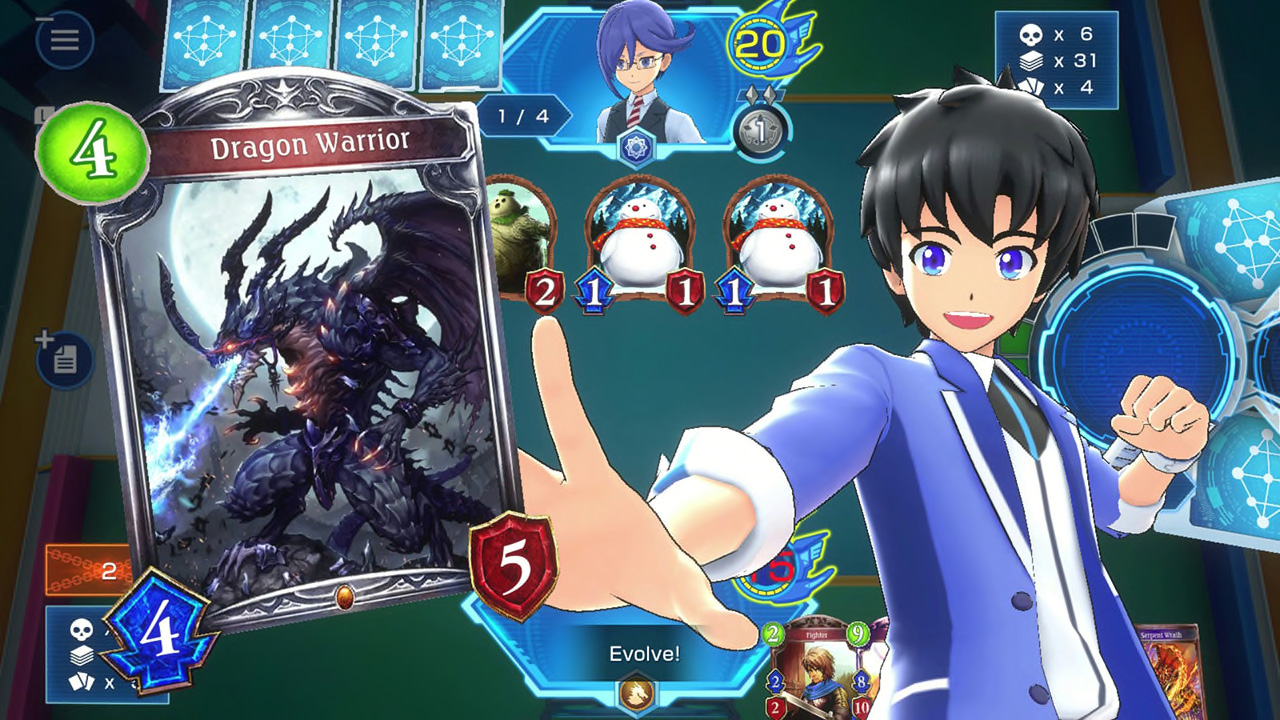 When it comes time to do battle, Shadowverse uses an interesting device to progress combat. As noted, you take turns between you and the AI or a friend if you are playing online. The game will randomly choose who goes first. Once you’re ready to start, the game shuffles and deals each player’s active deck. Each card has three numbers on it, and one of these indicates how many points it takes to play the card. At the start of battle, you have one point to use, and you gain one point per round (1 point in round 1, 2 points in round 2, etc.). So, the further you go, the more powerful cards you can play. Here’s the trick—just because you have a point, it doesn’t necessarily mean you should play it. You’ll see what I mean when you start challenging the NPCs after your training sessions. Speaking of training sessions, the game does a fair job of providing you with the basics of the card battle mechanics: what all the numbers on the cards mean, how to “evolve” a card (make it more powerful), how to acquire new cards, fine tuning your deck, etc. This is where the real fun and work come into things.

Shadowverse sports about 400 different cards you can collect and use. Your starter deck is nice, but it isn’t a complete set of any of the different types. Fortunately, there are kiosks on the school grounds from which you can purchase more cards. Don’t worry, you use in-game currency to buy new cards. You can also win cards in battles or find them in glowing gift boxes left randomly around the school. These gift boxes can also contain some game cash so you can spend it however you like. Here’s where the work part comes in; it will take some time and a good deal of exploring, finding gift boxes, and winning battles to collect these game coins. Once you have them, you need to start buying more cards to get new spells, followers, and amulets. Each type of card will have a different effect during the battle, and you need a well-tuned deck to take on your opponents. The orientation battles are very easy and the game sets you up to win. This is nice, but it doesn’t teach you the strategies you will need for later.

After the orientation period, the battles get a bit harder (indeed, rather cutthroat). On the upside, you will learn quickly what it takes to win a more serious challenge. When you lose (sooner or later, you will lose) the game gives you the option to try again with the same opponent so you can use your failures to learn quickly. If you really want to do well with this game, be prepared to spend a lot of time reviewing your cards’ statistics and abilities, and creating decks tuned to the different types of opponents you will face. There is a lot of collecting of cards to be done as well. Once you are ready for a battle, they are easy to initiate and they don’t take very long to complete. 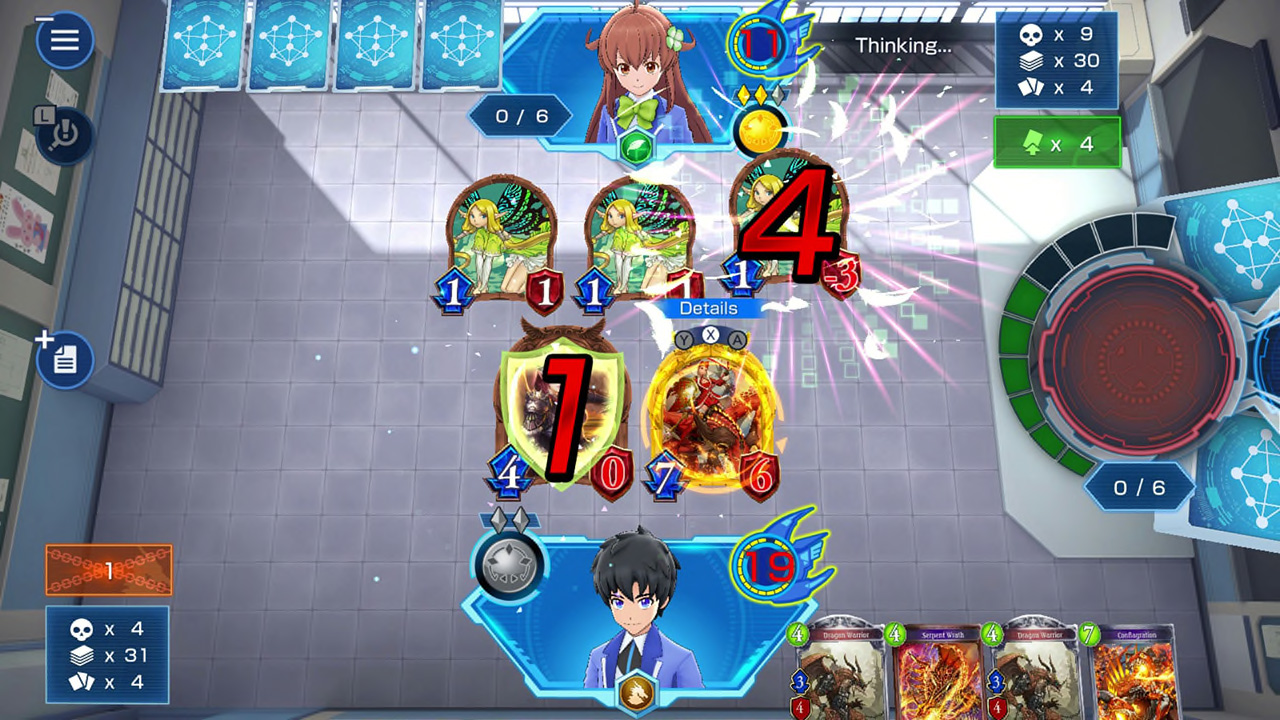 All things considered, Shadowverse: Champions Battle is a well-rounded gaming experience with a variety of elements which work together to be engaging without being overwhelming. There is plenty of play time with learning all of the major categories of cards, the three types of cards within those categories, and all the hundreds of cards you can acquire in the game. You get to create and save custom decks so you can take on different categories readily. The card point system is not overdone, but it does provide a faceted way of thinking about what it will take to play the card and the effect the card will have. There is some fun to be had running around the school and exploring the story elements of the game as well. Shadowverse: Champion’s Battle succeeds in the areas of audio, visual, and game play.

Champion’s Battle is, in short, fun. There is plenty to do and, even though the price-tag is a bit on the high side, it is a complete game. Any foibles are minor and easy to overlook if you just want to enjoy a card-based strategy RPG.