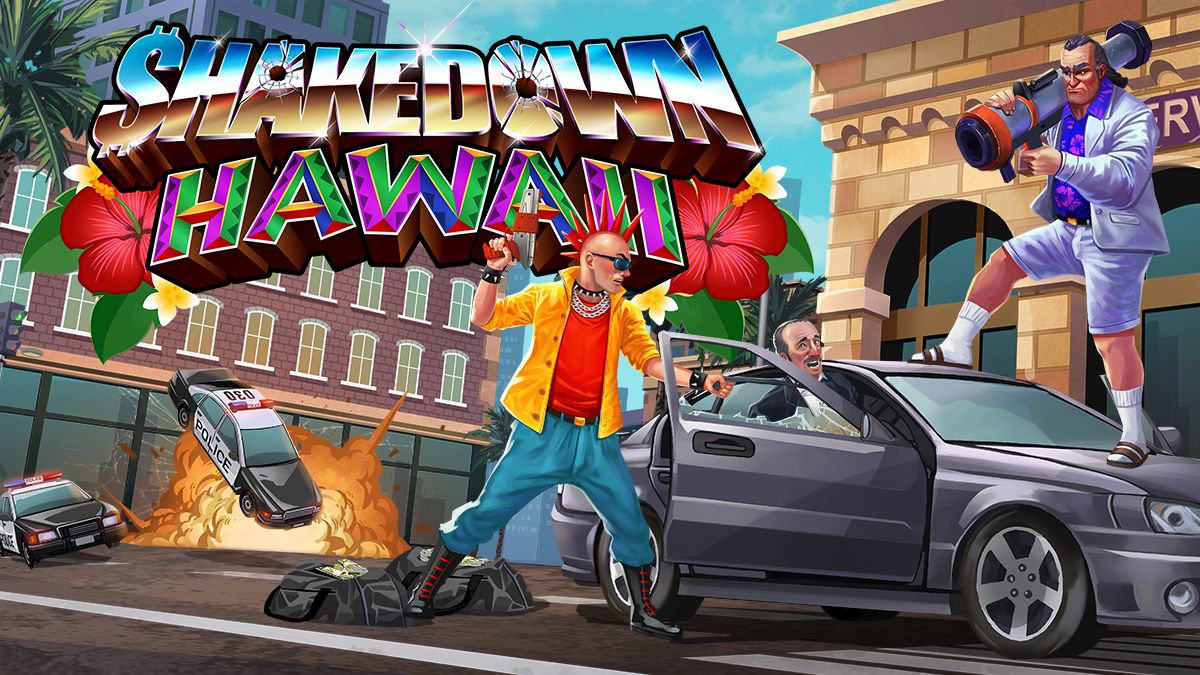 Shakedown, breakdown, takedown. Everybody wants into the retro line.

Aloha and welcome to Hawaii. We have beautiful beaches, palm trees, sunshine, and a lot of corrupt business going on. The good news is you get to be a large part of the corruption. Wait…that came out wrong.

Actually, that is right because this is Shakedown: Hawaii—another in the long list of games styled after Grand Theft Auto. In this title you get to steal cars, buy businesses, shake down shop owners, beat up gang members, run from the police, and even steal a body in a hearse. Good times, right?

Well, they would be better if Shakedown Hawaii wasn’t stubbornly determined to look like it’s straight out of 1993. I appreciate the nostalgia of some of the older games and the attempt to keep the look and feel alive, but this game should’ve made an attempt to look good. There is a lot of detail in there: buildings, people, cars, trees, and so on. Most of these you can smash, shoot, burn, or crash into and run over. The damage is well visualized and, since almost everything is on the table for destruction, it is apparent the programmers put a good deal of effort into making the world as interactive as possible. The 16-bit approach, however, makes it all look messy on the small 3DS screen, making the Nintendo Switch version the better choice even in handheld mode. 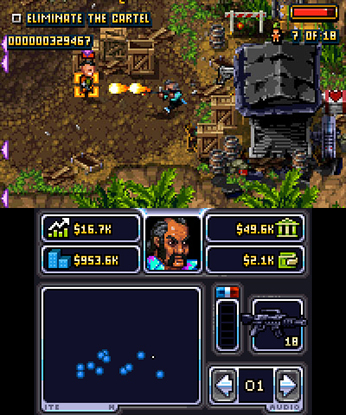 If you’re not on board with my “enough of the pixilated retro look“ rant, then fair enough; let’s get into the game play.

Most of the gameplay is handled with the D-pad (movement) and the B (jump) and Y (attack) buttons. You can use the bottom touchscreen to interact with the map, change weapons, and so on. Sometimes there are alternate uses for the X button, like for flushing the toilet (don’t worry; there isn’t any “business” in the bowl, just a little bathroom sabotage). When using your attacks, be judicious with your weapons; guns will run out of ammo, but the ball bat is good forever. Also be very careful with the flamethrower; it’s a lot of fun, but you can set yourself on fire, which is not so much fun. 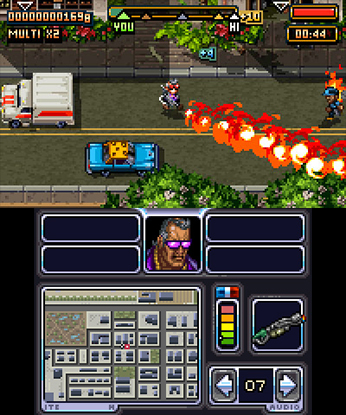 The story revolves around a heretofore lazy businessman with no ethics or morals. Once his greed is aroused there is basically nothing he won’t do to turn a profit and keep his company from falling into the hands of another. Our master of mayhem has a son who sees himself as an up-and-coming rapper who wants to get some “street cred” and make it in the music business. Unfortunately for pops, junior’s activities often end up costing the old man a little headache and some financial setbacks (but this is no surprise). 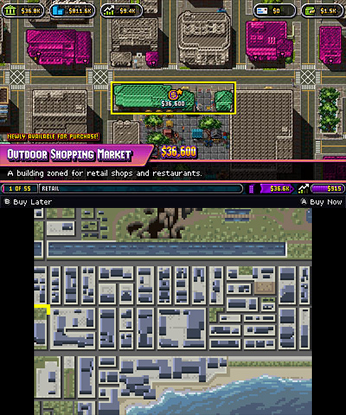 The game is structured as a series of missions which step you from one business decision to the next. Unfortunately, most of the real decisions are made for you; the game presents you with one option at a time, and you can either not buy (usually because you don’t have enough money) or buy and move on to the next opportunity for skullduggery. Along the way, be on the lookout for small skull icons which show you some mini missions you can take on. They are mostly shootouts and obstacle courses. Some of the mini missions are more challenging than the main event, so they are worth exploring.  Sadly, the main missions get a bit stale after a while as they become a somewhat sedate mission grind. The highlight of all of this comes when you do something which gets the attention of the police. Then you get to have a car chase, a shoot-out, and even push some cars in the water in your attempt to elude the fuzz. The game also provides some “coins” floating in random locations which will provide you two seconds of “cop invisibility.” During those precious two seconds you can put some distance between you and the cops to make a clean getaway. 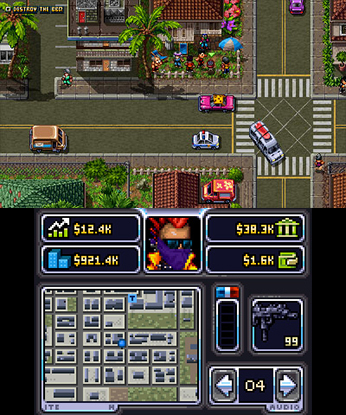 I did experience a few occasions during all of this where the game seemed to forget what my character should be doing. You can follow a yellow mission line on the map, but when my avatar got to the “destination” there was nothing to do and no update to the mission. Wandering around for a while or pausing the game and restarting seemed to reset things, but it was a bit annoying. The save points could’ve also been a bit more precise; when I came back into a couple saved games I had to complete the previous mission all over again.

If you really like the open-world, GTA-style games and haven’t grown tired of really old graphics technology, there is some fun to be had with Shakedown: Hawaii. Otherwise, you might want to look for a more robust game to squeeze some more life out of your Nintendo 3DS.