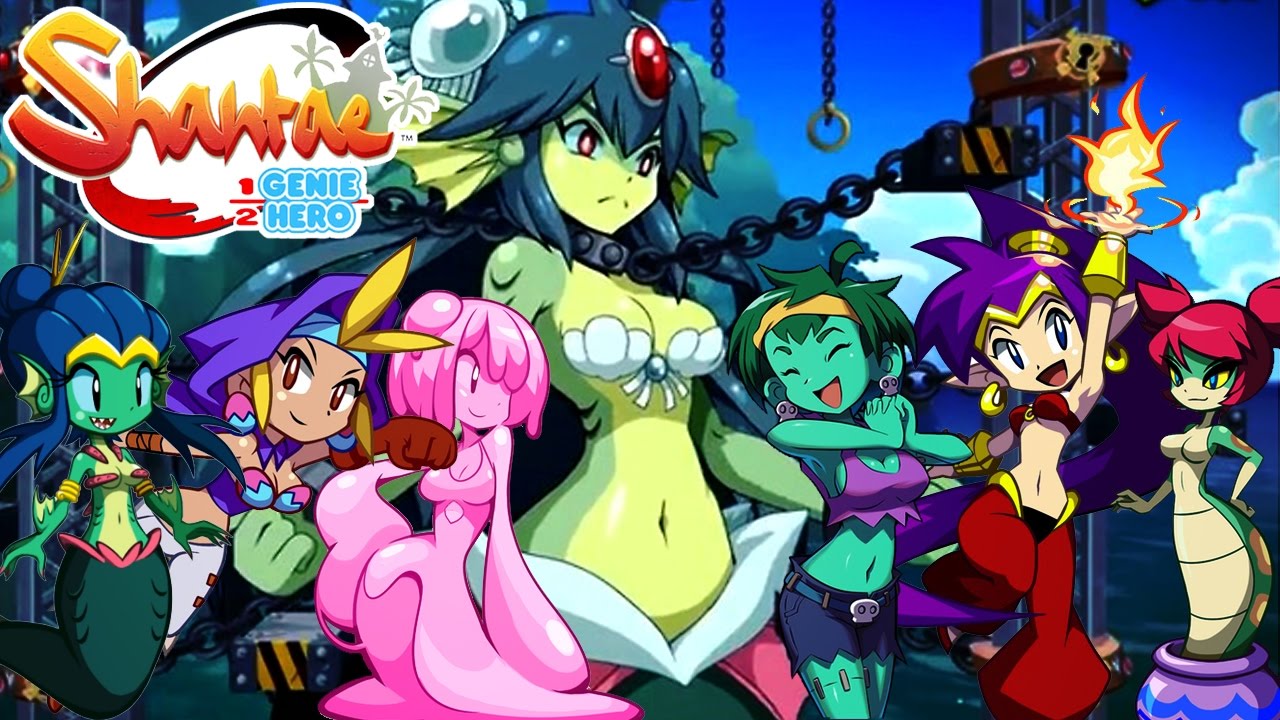 Shantae: Half-Genie Hero – Ultimate Edition is the complete version of Shantae’s latest outing. Originally released in 2016 on various platforms and in 2017 on the Switch, Half-Genie Hero is the fourth entry in the series. It’s also the biggest and boldest, bringing HD graphics and a whole swag of DLC to accompany the main game. But with the original Switch release not even 12 months old, is the Ultimate Edition worth your time? It depends.

I’ll start by saying that Shantae: Half-Genie Hero is an absolute blast to play, as Kaelyn discovered in her review in 2017. Shantae’s adventures are always a fun time, and this one is no exception, with colorful characters, humorous dialogue, an engaging story, and new moves to master. There’s also a variance in level design that adds elements to the series, keeping it fresh and helping it stand out from its predecessors.

As a newcomer to Half-Genie Hero, I enjoyed this original content. Many features contribute to my enjoyment, including enemies, Shantae’s transformation moves, diverse environments, and types of platforming to master. Whether it’s speeding down a gushing waterway before battling a giant mermaid, or navigating conveyor belts through a vertically scrolling level, there’s no shortage of excitement and challenging gameplay to keep players hooked. 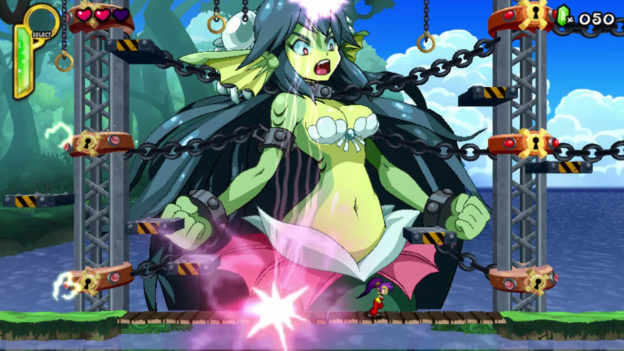 In this way, Shantae: Half-Genie Hero is an easy game to recommend. But this is essentially a re-release, and there are three types of people in this world: newcomers to Shantae; those who’ve played Shantae games, but not this fourth title; and Shantae fans who have already played this entry. For the first two groups, the choice is easy: this game is essential. Play it now. To anyone who has experienced Half-Genie Hero, it’s trickier to recommend, especially if you have the DLC already. But even the DLC, a fun time for sure, has its own drawbacks.

As you begin your time with Shantae: Half-Genie Hero, you’re presented with eight options, including the main game. There’s a Hero Quest (main game with abilities unlocked) and Hard Core mode (a tougher version of the main game), but also several adventures involving other characters or alternate versions of Shantae. This looks like a lot of content initially.

Each adventure tells a story, and – on the plus side – there is some genuinely brilliant design choices and creativity here. The stories are just as humorous as the main quest, and the character design is extremely well done. The first such story is a retelling of the main game from the perspective of the antagonist, Risky Boots. It’s fun to play as the villainous pirate, and one nice touch is that she “feels” different to play with, like her jumps are slightly heavier – it’s like playing with Mario compared to Toad. She also has her own weapons and skills, and it’s amusing to hear her side of the story. 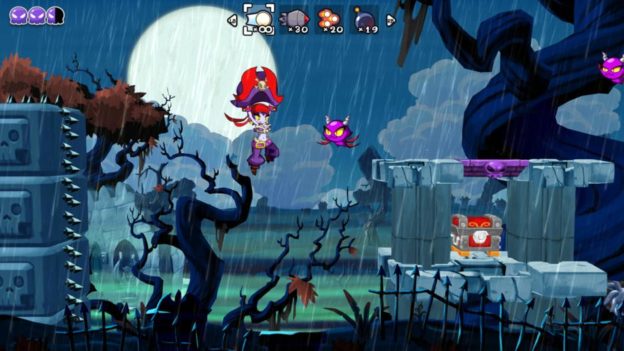 Friends to the End is the most creative new content. Here you play as Shantae’s friends, Skye, Bolo, and Rottytops. The trio must work together to save Shantae from herself, as she’s trapped in her mind thanks to some trickery from Risky Boots. Each character has unique abilities and you can switch between them at any time – a necessity to maneuver through levels. Rottytops can throw her head past barriers, reforming on the other side; Bolo latches onto hooks to swing across large gaps; Skye creates temporary platforms to help reach inaccessible areas.

Then there are several new versions of Shantae to try out, where Shantae dons a new outfit, changing her abilities. These are fun romps through familiar territory, but with their own twists. For example, in Beach Mode, Bikini Shantae can’t stay out in the sun too long, forcing you to collect sunscreen from fallen enemies before you burn up. In Officer Mode, Police Shantae sports a decent firearm that upgrades with gems, though her stiff outfit means she can’t duck or bend. Ninja Mode provides Shantae with speed and stealth as she hacks and slashes her way through enemies. 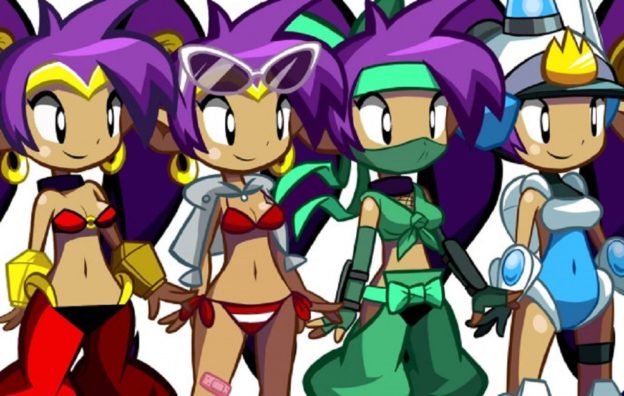 These creative new ways to play sound great, and they really are. So what’s the downside? The only problem with this extra content is the lack of new environments. As much as I love Shantae, I found myself tiring of playing through the same levels again and again. And again. As Risky Boots, as Police/Beach/Ninja Shantae, and then as Shantae’s pals. Let me reiterate, the characters themselves – including their design, stories, and movesets – are absolutely brilliant, and I genuinely want more of them; I can see a spin-off game being developed in the future. But the levels are the same, including the bosses, which makes it seem repetitive and, after awhile, monotonous. Thankfully, this is all just bonus content that’s still fun to try; it definitely shouldn’t detract from what a great game Half-Genie Hero is.

The graphics in Half-Genie Hero are – not surprisingly – phenomenal. The game looks crisp and sharp, with some absolutely stunning backdrops. The full moon hanging over the horizon, right at the game’s outset, is a particular highlight and is breathtaking. Even Scuttle Town looks like it’s been revamped, with a strange effect in place that makes you feel like you’re walking in a circle, despite only moving left to right. The developers have given depth to their 2D animations. The only minor drawback I noticed was in some of the darker levels, which suffer slightly when platforms seemingly disappear due to a trick of the light. 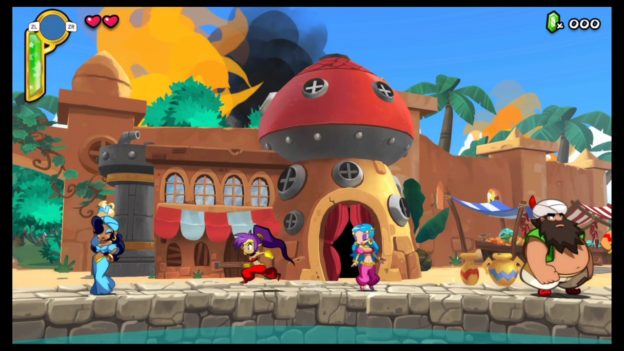 Similarly, the audio is exceptional, as we’ve become accustomed to thanks to Shantae’s previous outings. Catchy beats accompany Shantae on her quest, a mix of retro-inspired pop that’s upbeat and fun, and suits the game’s light-hearted mood extremely well.

Overall, Shantae: Half-Genie Hero – Ultimate Edition is as fun as you’d expect from a Shantae game. The real question is: have you already purchased it? If so, you may not feel like double-dipping again so soon, especially considering the DLC is really just a fun distraction, and not as solid as the main game. That said, this is a fantastic game, so anyone who hasn’t already played it should do so immediately.

Shantae: Half-Genie Hero – Ultimate Edition really is the definitive version of this already fantastic game. The DLC, while not as strong as the main game, is a nice bonus, with some very creative use of Shantae and her friends. If you haven’t already tried this game, the answer is easy: play this now!