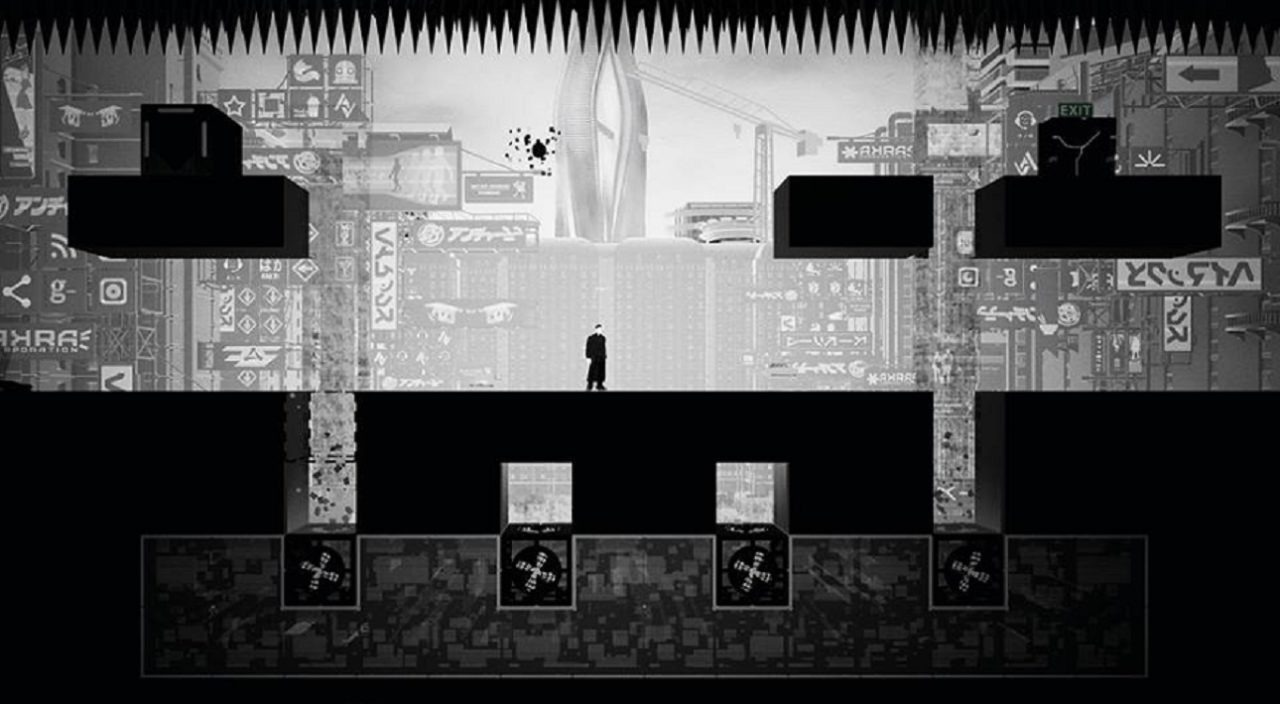 Shift Quantum opens with an introduction that is so equally friendly and corporate that you can’t help but feel a little bit suspicious. When a slick, chic tech company promises you eternal happiness through their puzzle games, it’s easy to suspect they might be the cause of an impending dystopia.

The game is instantly atmospheric, well earning its “cyber-noir” description. If the “cerebral contentedness programming” company Axon Vertigo wasn’t enough to set the scene, the backdrop of monochrome skyscrapers certainly do it. Vehicles drive along the roads in the distance and occasionally swoop through the air between the tall buildings. Big Brother-esque faces loom out of the side of the blocks, watching over the metropolis.

In the foreground, the stark contrast between the pale city and the black puzzle blocks makes the mazes you have to traverse really stand out. The whole design is stunning in its simplicity. You play as a silhouetted character in a long, black coat.

The puzzles themselves bend the rules of reality. Along with all the usual action-puzzle platformer techniques that get you from one end of a level to the other, you also have the option of turning the whole world inside out. You can pull yourself into reality’s negative, switch black to white and vice versa, rearranging the stage so you can find a clearer path through it and even altering it to suit your needs.

There is definitely a sense of danger about the game. As with any puzzle platformer, death just means starting the level over from the beginning. But the way your limp body dangles off sharp spikes or disappears, crushed, beneath solid blocks is chilling to behold.

This is compounded by a sense of mystery.

When you start the game, you aren’t given a lot of backstory about the world. If you trust the words of Axon Vertigo alone, you might imagine it’s a perfect world where people can buy happiness from a cool company.

But it’s the little details that give it an edge. The way that the world wobbles with a brief shower of static hints at problems with the programme feeding you your happiness. The mysterious character who appears, disappears, and flees, leaving only her scarf behind makes you wonder who out there might be on your side. Or who might not be.

It’s easy enough to pick up the different techniques you can use to get through the game, but the puzzles themselves are satisfyingly challenging, without crossing the line into frustrating, even when they take a few goes to nail.

For a puzzle platformer, Shift Quantum is an incredibly atmospheric game. It doesn’t have a lot of explicit story, but there is a wealth of subtle details scattered through the levels that make you feel like you’re exploring something with far more depth than it originally lets on.

Shift Quantum adds a new dimension to the action puzzle-platformer, with an element of mystery that makes it incredibly atmospheric.