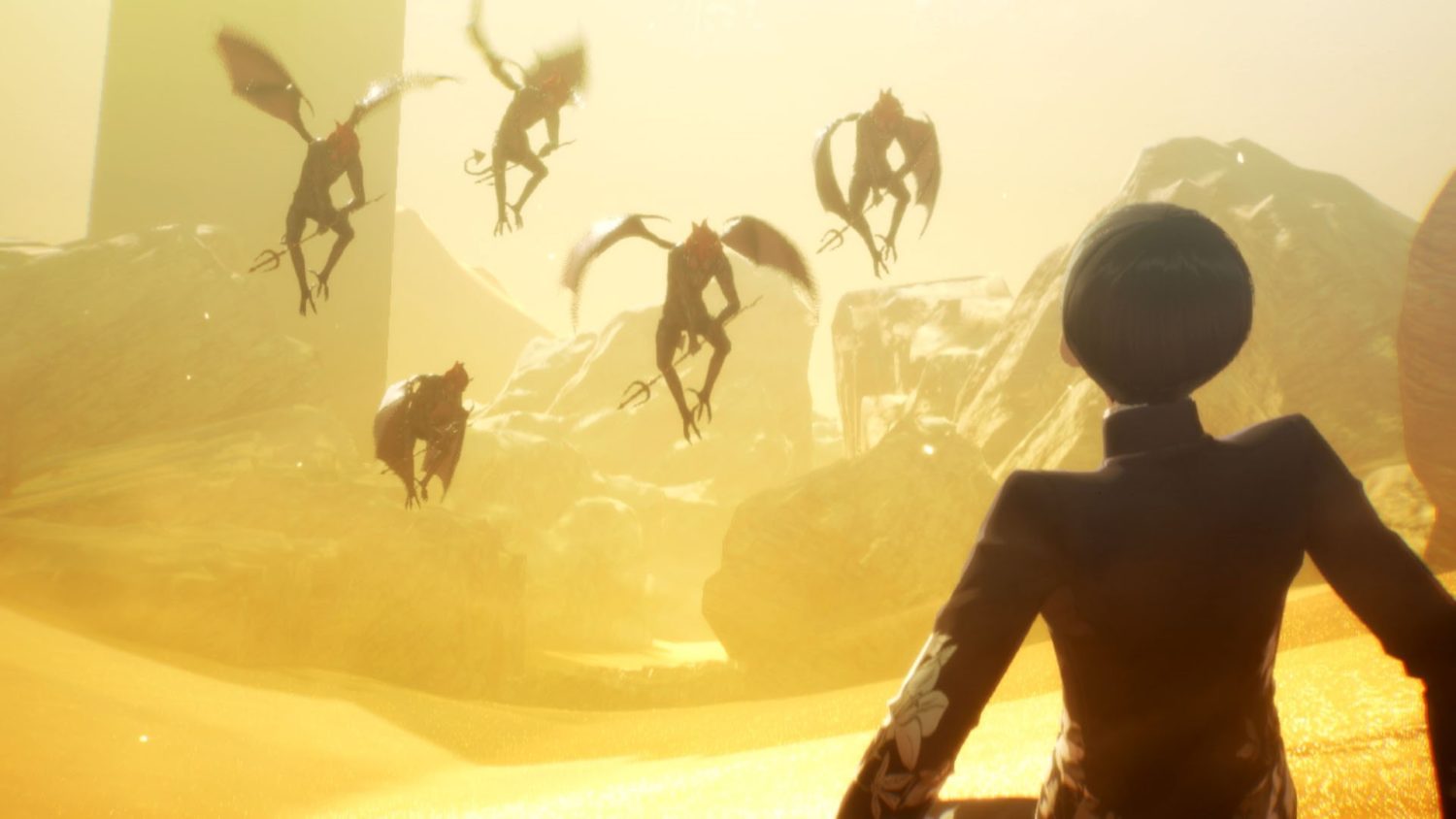 Confronting your demons...all 234 of them.

It has taken me a long time to write this review, largely because when I first bought the game, I didn’t want to play it. I’m a fan of the series—having greatly enjoyed Shin Megami Tensei IV, Strange Journey, and the two Devil Survivor spinoffs on the 3DS—but it’s been a long time since I’ve disliked the start of a game as much as Shin Megami Tensei V’s.

There are a couple of reasons for this, the first of which is that the game gives you absolutely no one to care about. We’re introduced to a few students whose personalities are outweighed by their stylish school uniforms, only to have them almost instantly pulled away by a demonic apocalypse. What’s left is a futuristic (or parallel?) Japan—referred to as Da’at—that’s almost entirely covered by sand. Our hero is merged with a god to become what’s called a Nahobino, but even that isn’t as interesting as his new hair and the possibility that he’s become the fifth member of the reformed ABBA, judging from his new ABBA-tar outfit. 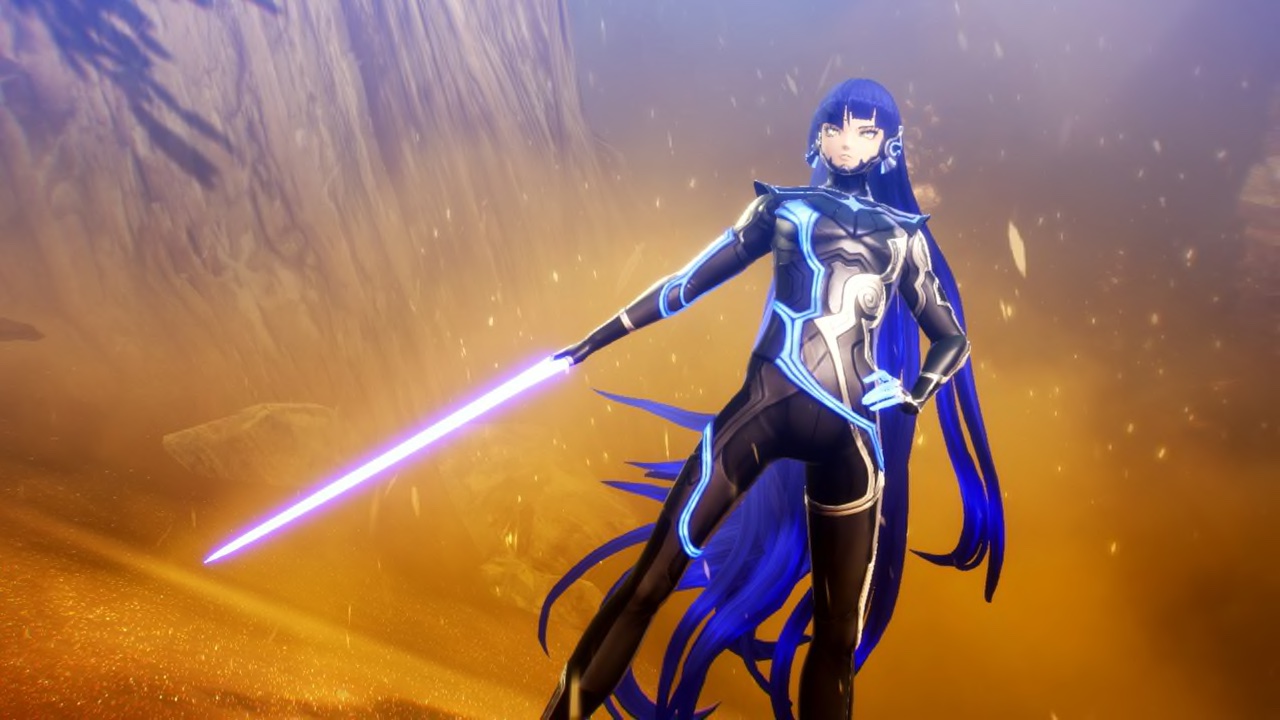 So, with practically nothing to motivate me, I trudged my way through the first 15 to 20 hours of Shin Megami Tensei V. It took that long to get back to civilization, of sorts, and any kind of story or character development. Should I have been surprised when I was quickly shoved right back into the apocalypse with little more incentive than to save a fellow student I barely knew or cared about? No, because it’s very clear this JRPG is not about the story or characters. Who these people are and why they’re fighting is given little more than occasional cutscene consideration. 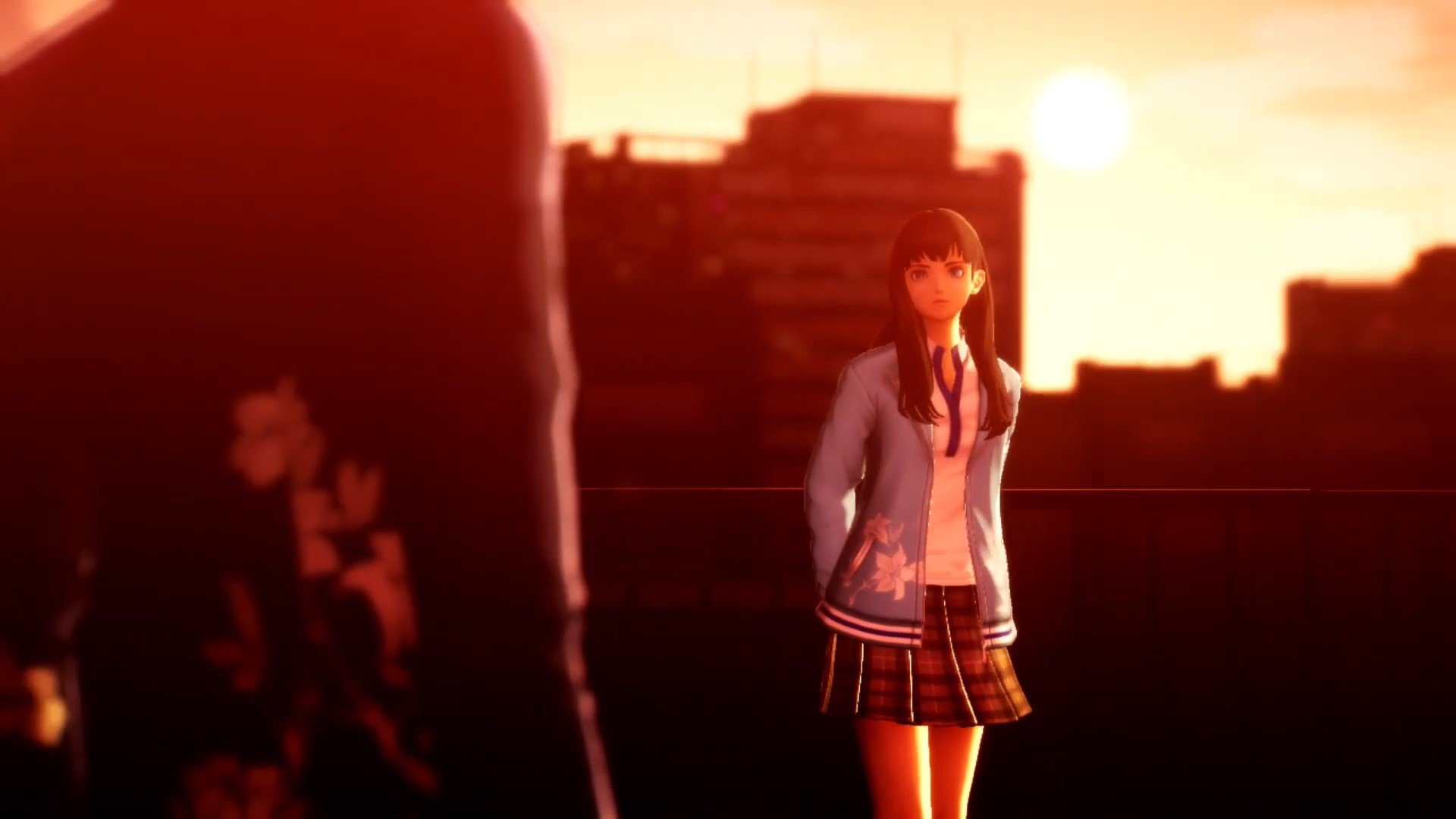 I guess there’s no point in introducing us to the characters’ demons when there are so many actual, by-God demons we’ll be meeting instead.

Anyone who has played a Shin Megami Tensei game understands this. As with the previous entries, V revolves around a war between angels and demons, with modern-day Japan caught in the crossfire. This time, however, we’re told right away that God is dead. The demons have won, but the angels haven’t accepted their fate. Have you? Do you care? There will be plenty of confrontations and decisions throughout the game that allow you to choose a side, if either.

But again, the game does practically nothing to make you care one way or another. I made every decision based on what I’d do, not on what the characters would do, and that disappointed me.

Thankfully, most of the disappointment ended there, as the battle system and demon fusing/collecting elements are so effective. Battles are turn-based, using what the game calls a press turn system. You’re given a single turn for each character in your party (up to four, including yourself). You can attack, defend, pass, use an item, or buff/debuff your team or the enemy. If you attack an enemy’s weakness, however, you will earn yourself an extra turn (as well as cause more damage). You, therefore, want to stock your party with demons that can exploit these weaknesses, but you don’t know what those are when you meet a demon for the first time. It’s also not always clear which demons you’ll face when approaching one, so balancing your party (or keeping an online guide handy) becomes key. 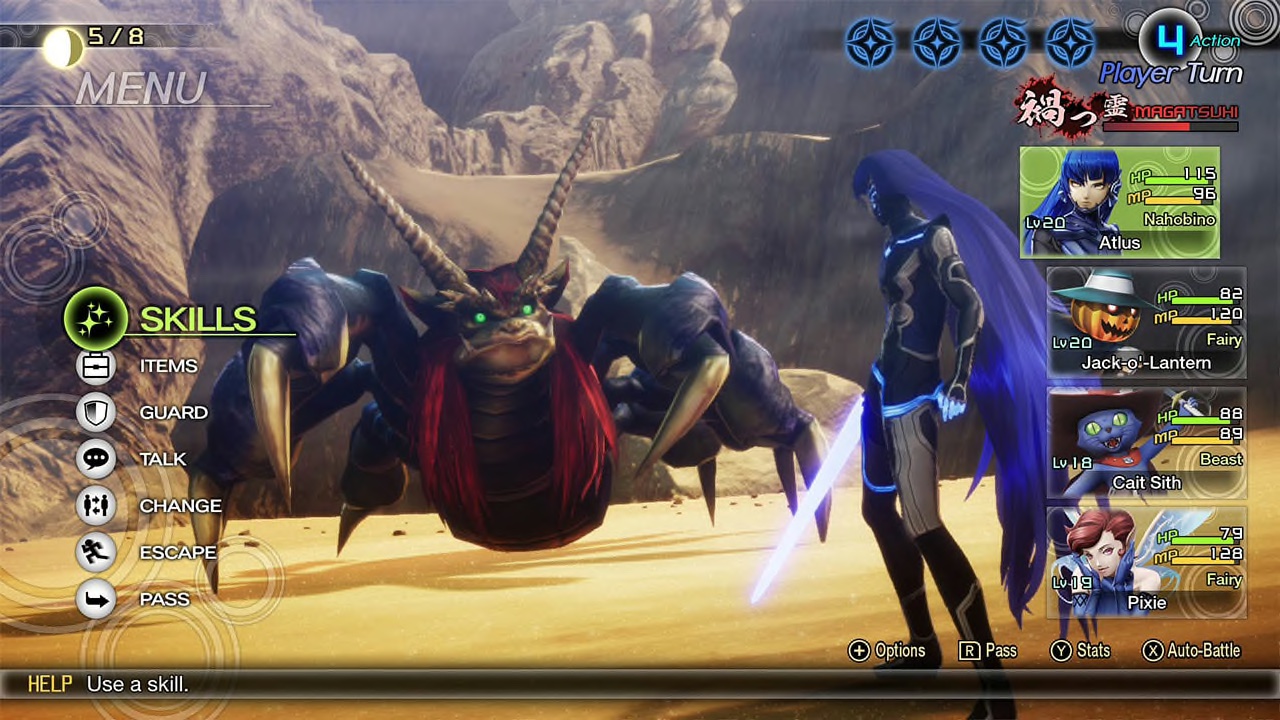 It’s important, then, to keep evolving your list of available demons. Some are given to you via the story, but the vast majority of them must either be coerced into joining you or fused (more on that in a bit). Coercion happens via dialogue during battle, and usually results in you correctly (and randomly) answering a few questions, followed by a bartering phase in which you give up health, macca, items, and such. Tip for newcomers; make sure there’s only one demon left before attempting to recruit. If negotiations go south, you give up your party’s turn. 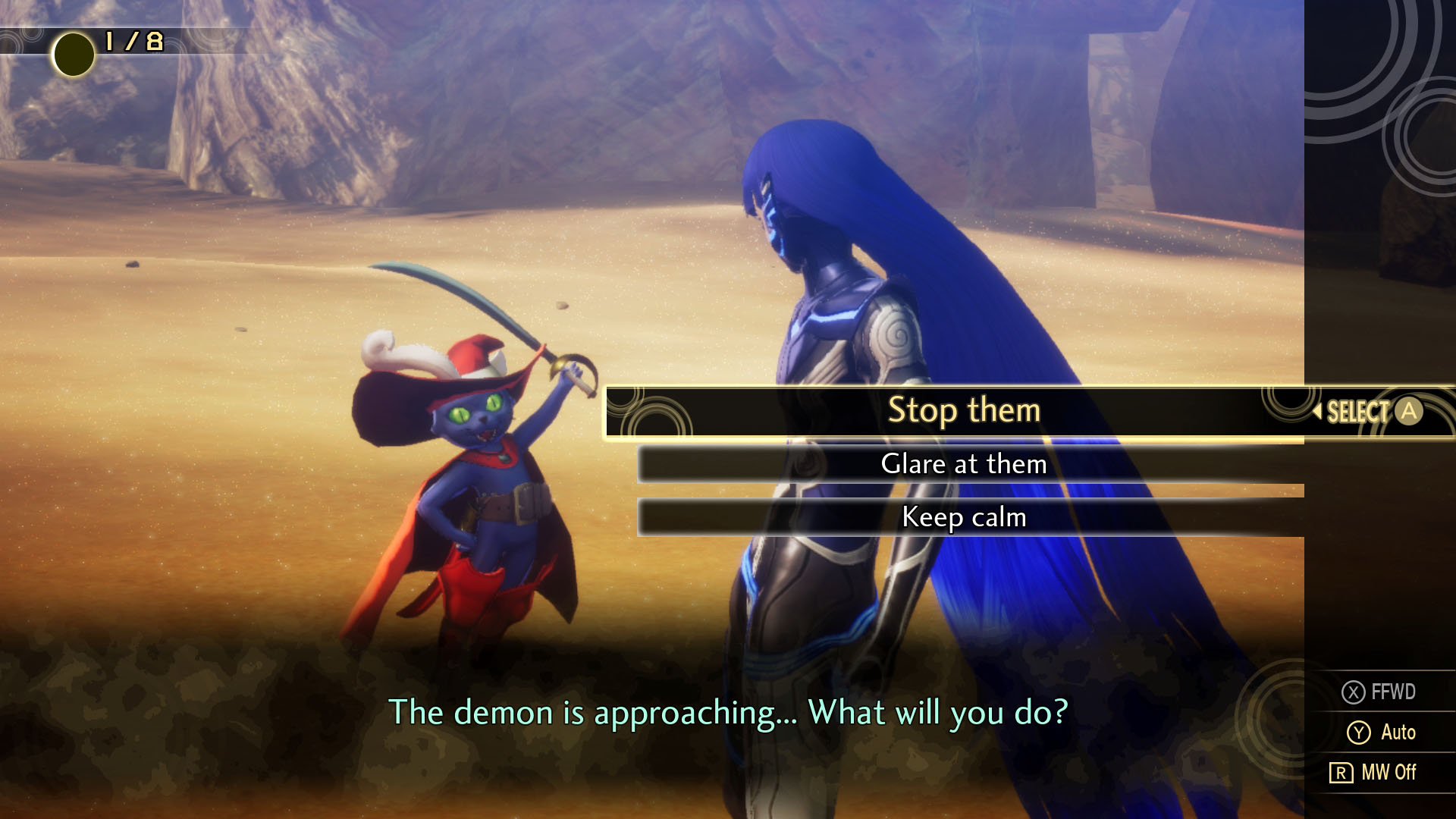 The other major acquisition method is fusion. This is the act of combining two demons to form a (hopefully) stronger and more useful one. Some of the demons skills can be passed along via fusion, so you want to make sure the new demon can take advantage of them (you don’t want to pass along fire element skills, for example, if the new demon has strong physical attacks and weak magic attacks). 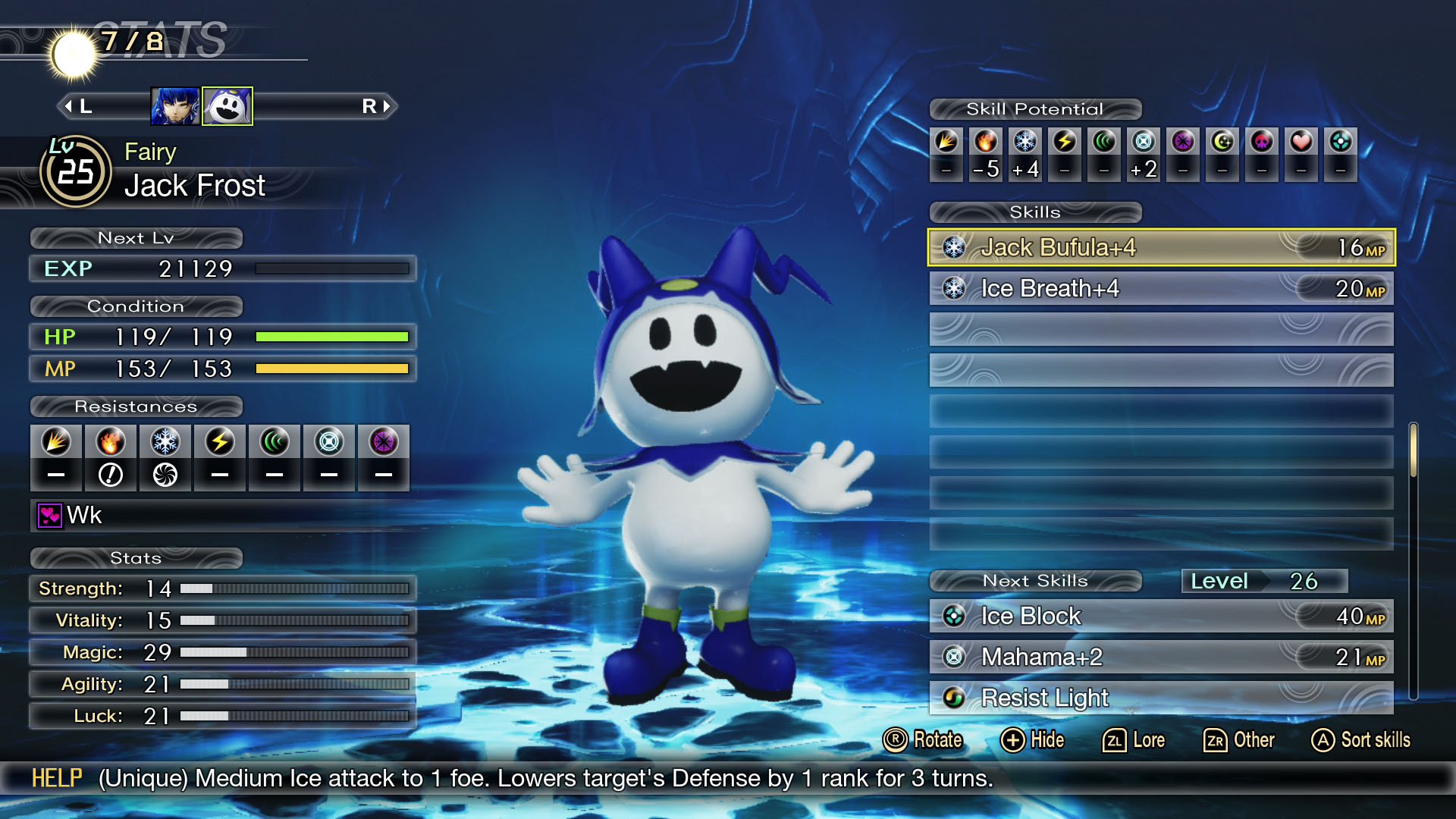 This process is key to proceeding in the game, as demons quickly become useless and must be fused into something better. The level bosses serve as a check to make sure you’ve been working hard, as you won’t stand a chance if you don’t have the correct demons (or, more accurately, the correct demon skills), ready to go. No worries if you’ve already lost a demon that you now need, however. All acquired demons are added to a Compendium that allows you to give up macca for a new one if you need it for a specific demon. In other words, you don’t need to track down that specific demon again and start the bartering process all over.

Shin Megami Tensei V helps you out in other ways, too. Da’at is literally littered with vending machines full of items you can exchange for macca. There are also numerous elements and power-ups to discover and acquire, as well as Leyline Founts where you can save your game, buy/sell items, heal up, fuse demons, and fast travel to other Founts you’ve previously unlocked. Using items in battle is surprisingly helpful, especially the dampeners which repel even the most powerful demon attacks. This is why you can only hold up to three at a time, and why you need to unlock the demons’ ability to use items.

What you can’t do this time around is purchase weapons and armor as you could in previous entries. Powering up your Nahobino now involves acquiring essences from various methods (demons, item drops, etc.) and making them your own. Going up on a boss with a nasty force attack? Acquire a force repelling essence from a demon. Of course, that’ll make you weak to different elements, too, so juggling essences with your party becomes very important. 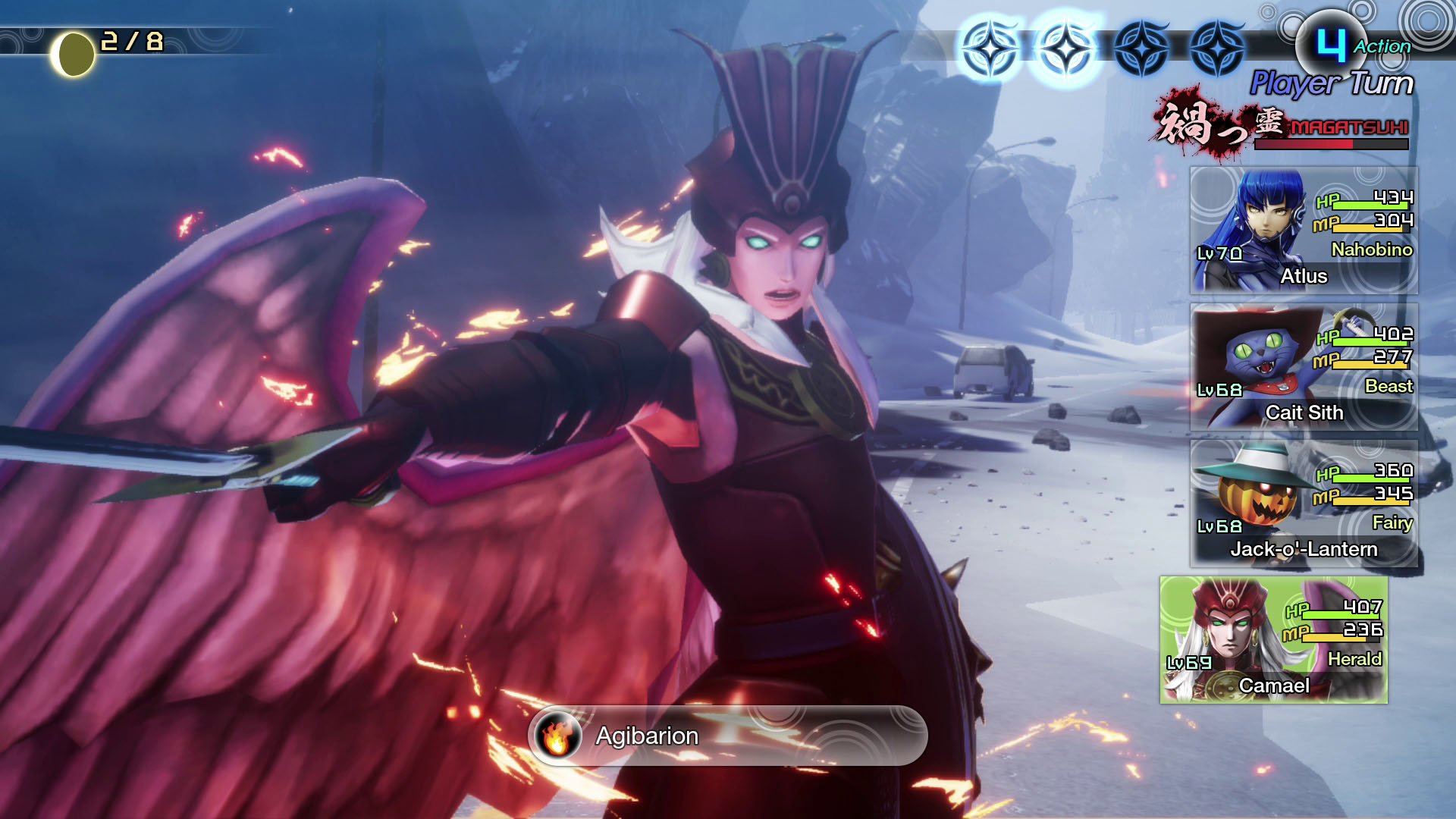 The same can be said for the miracles you learn. 200 Miman demons are hiding through Da’at, and finding them (along with some other more easily located items) will give you Glory that can be used to level up your Nahobino in numerous ways. Increase your skills (and the number you can acquire), unlock additional demon slots, gain additional battle options…the opportunities for advancement are crazy, and wrestling over how to level up is part of the fun. You can’t upgrade everything, so it’s important to understand your own style and work in that direction.

Getting all of this requires a ton of exploration and constant battles, so it helps that Shin Megami Tensei V’s greatest strength is the level design. Gone are the confusing and tricky overworld maps that led you to specific “dungeons,” replaced by huge maps to unlock as you progress. Yes, the environments are boring to look at, but they’re so expertly laid out and layered that I never grew tired of seeking out their hardest-to-reach areas. 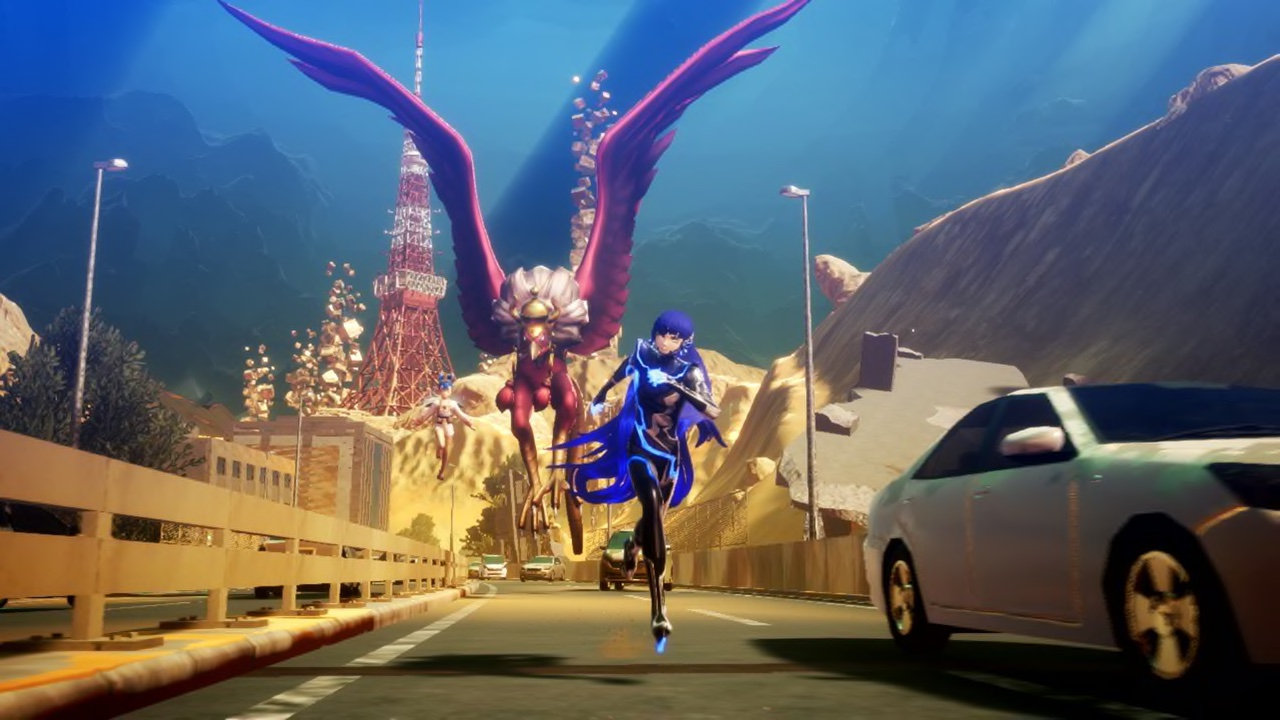 I just wish the game was a bit friendlier when it comes to saving. Pushing deeply into a new territory became nerve-wracking after 30 to 45 minutes, and too often I was killed with a one-shot critical attack before I was able to find that area’s Leyline Fount to save my game.

I’m not sure I can count that against the game, however, when I knew going in that it would be tough. All Shin Megami Tensei games are, and that’s part of the appeal. Unfortunately, the story has always been part of the appeal as well, and there simply isn’t anyone or anything here to care about. It’s combat and exploration for adventure’s sake, and your reward becomes nothing more than knowing you had the better strategy. 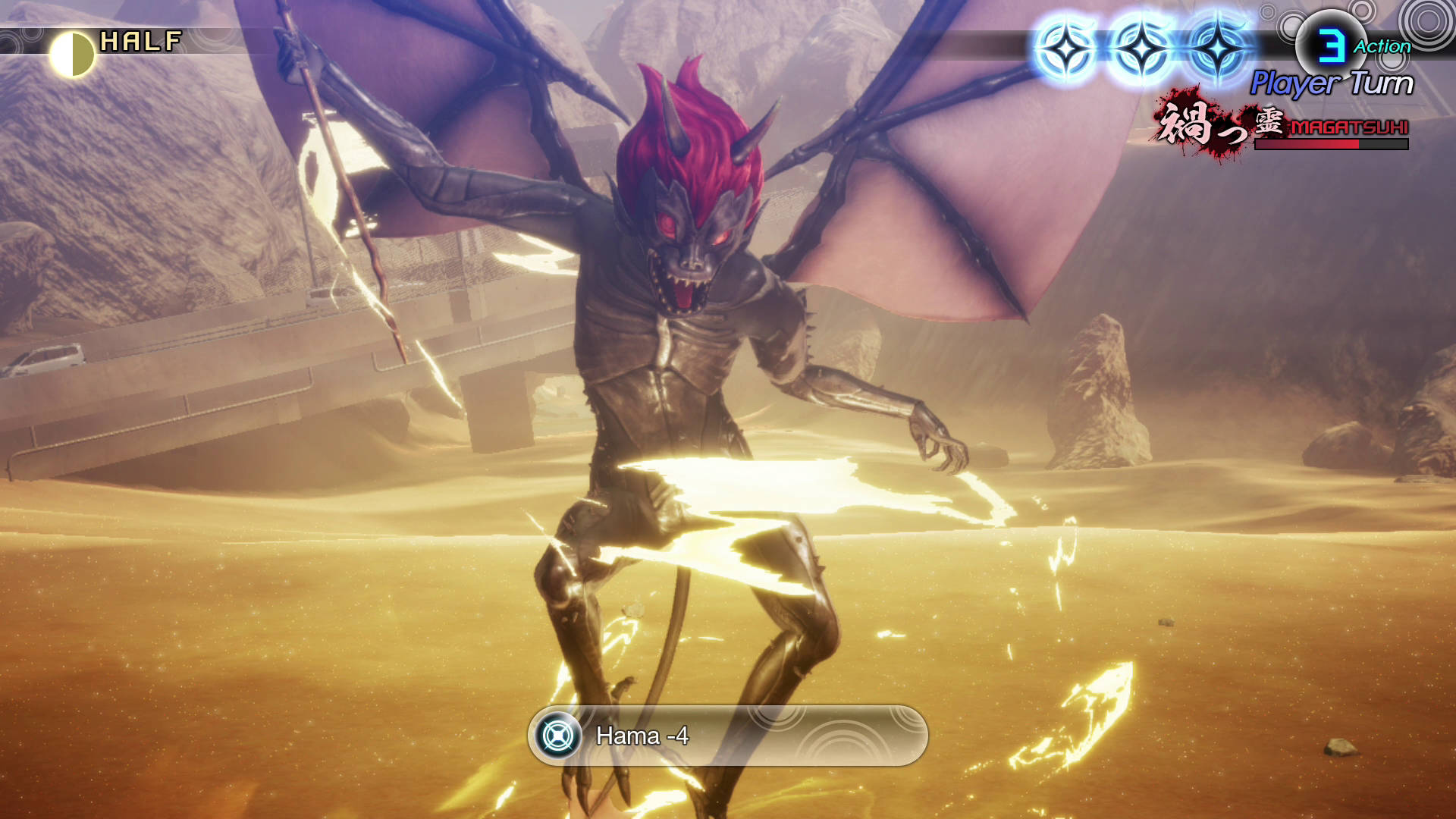 If that’s enough, Shin Megami Tensei V is going to give you more than your money’s worth. The battle system is simultaneously engrossing and infuriating, and always engaging. If you need more than a good fight, however, I suggest digging back into any other game in the series, all of which are part of a crazy SMT sale in the Nintendo eShop at press time…provided you can find your 3DS in the Da’at that is your game library, of course.

With Shin Megami Tensei V, Atlus has done a solid job of updating the series over to the Nintendo Switch. The new gameplay elements are mostly welcome, and press turn combat and demon fusing elements are better than ever. Unfortunately, the same can’t be said for the story, which never even begins to get interesting.