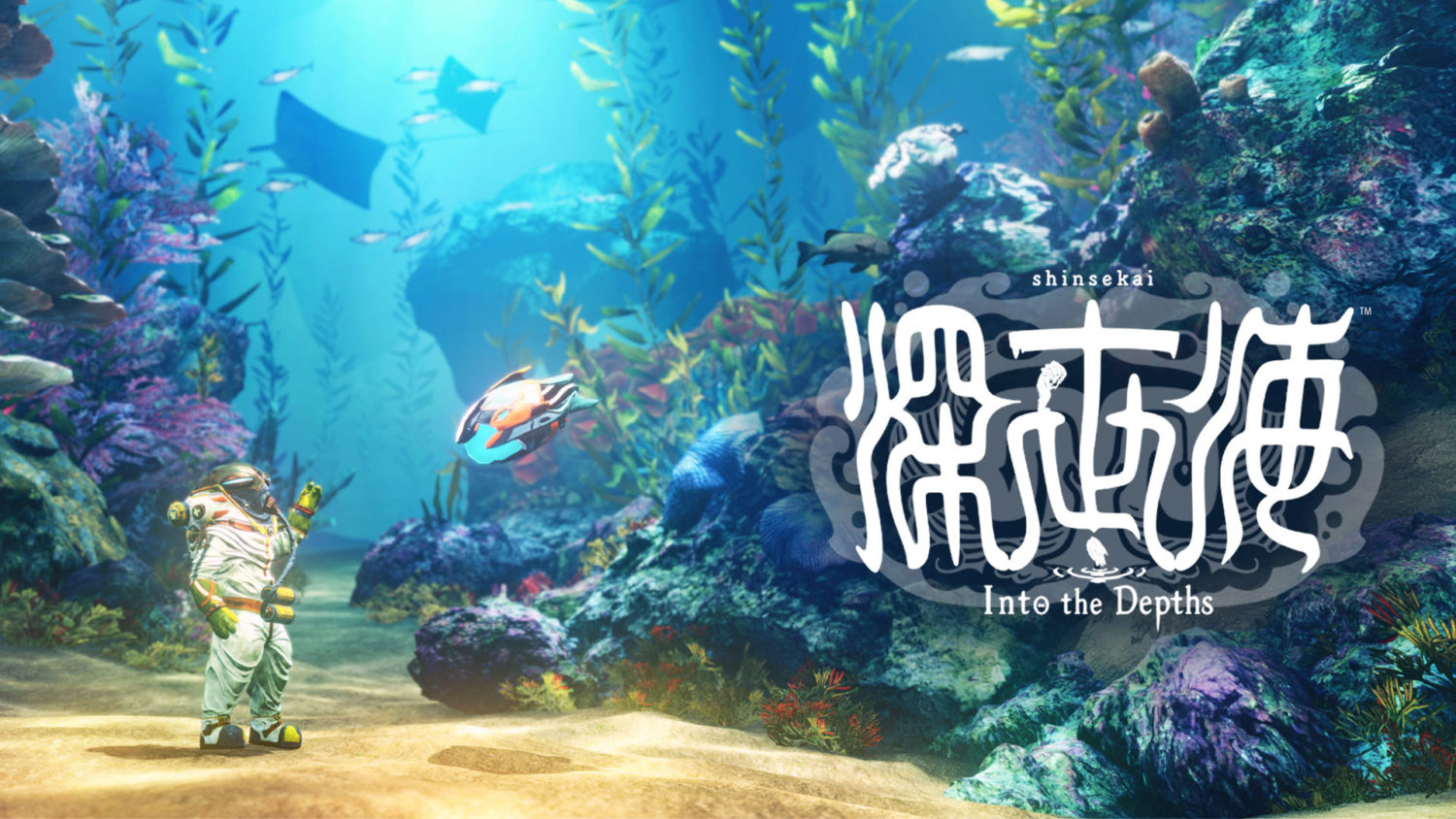 Well, here’s a new one; a Nintendo Switch game I originally played on Apple TV. It’s easy to recommend Capcom’s Shinsekai Into the Depths there since it’s one of the better games that come free with an Apple Arcade subscription. Can I recommend it as a $20 purchase on the Nintendo Switch? Let’s explore.

Shinsekai Into the Depths starts you in the…well, depths. The world has been covered in ice, so everyone has been forced underwater. At least we think everyone has. The game involves just one person—a diver seeking refuge in what appears to be a sunken ship or submarine. But the ice continues to expand, taking over our diver’s sanctuary, forcing him/her (I’ll go with “him” throughout this review as I was imagining myself in the role) to find a new location for survival. 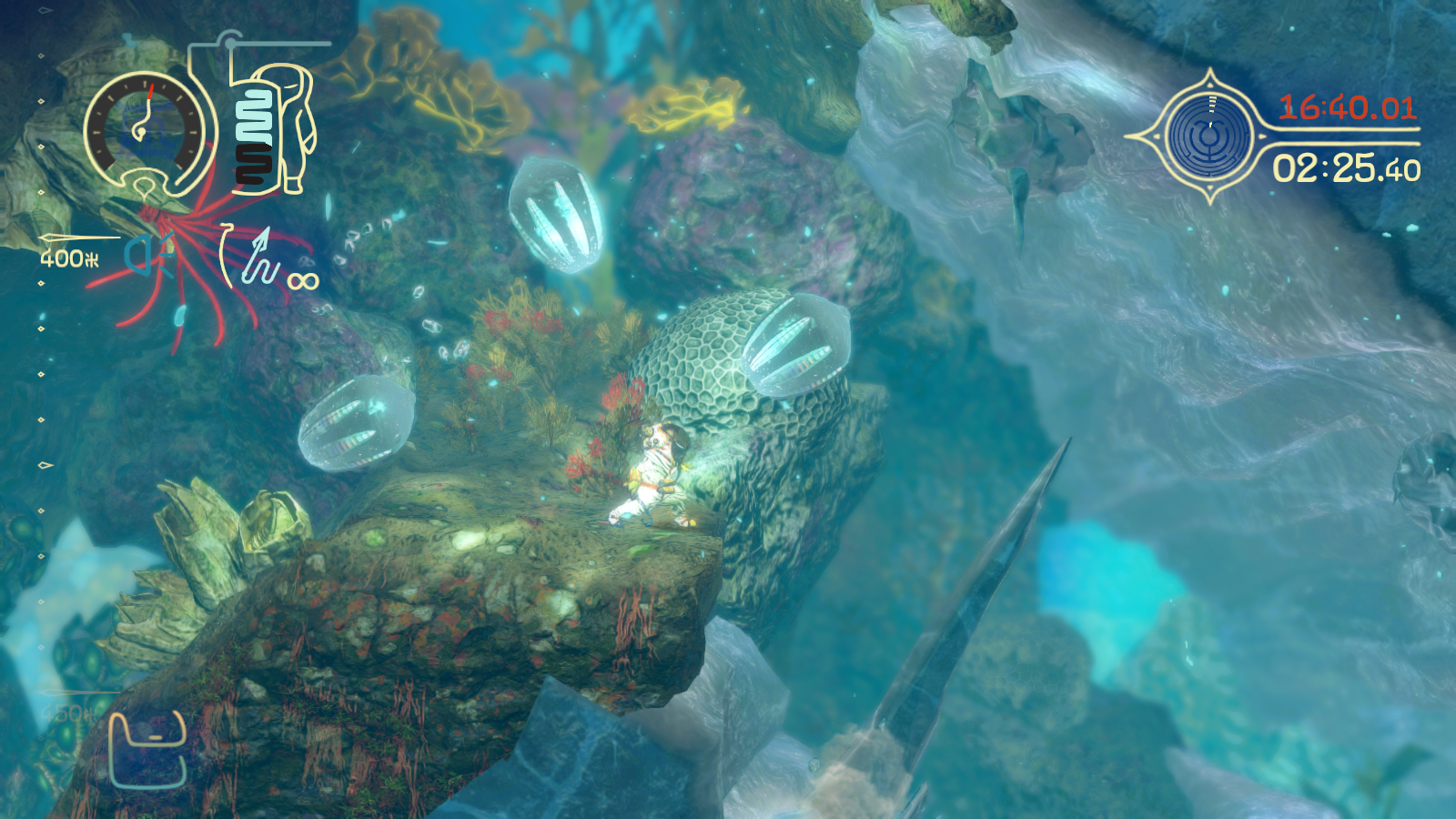 Exploration, then, is what most of the game is about. Unlike most undersea adventures and RPGs, Shinsekai doesn’t provide you with a location to which you can retreat. Rather, the game plays out like a slow-motion, mostly serene take on the Metroidvania genre. You’re traversing an open ocean, yes, but the levels are laid out in a maze that directs your travels. There’s plenty of back-and-forth as you unlock new areas by upgrading your pressure suit and items, and the game provides numerous save points along the way. In one particularly gamer-friendly move, you’ll even acquire the ability to create your own save points, albeit at predefined locations you have to discover.

As you’d expect, the ability to continue breathing is important. There are numerous pockets of air bubbles where you can replenish your tanks, and the game provides more tanks and upgrades as you explore. Taking damage from the numerous enemies and moments of clumsy diving can destroy your tanks, but it was rare (and only on later levels) that air supply became an issue. This was important for me, as I still have mild bouts of trauma when playing undersea games due to those accursed water levels of Sonic the Hedgehog.

The deeper you get into Shinsekai Into the Depths, the more complicated things become. Your suit acquires upgrades that need to be managed, you’ll learn new capabilities for your weapons, and getting from point A to point B becomes harder to figure out. Of course, the aquatic enemies get tougher, too. Where it’s originally enough to just hit them in the face, you’ll soon find yourself needing to harpoon them to pull them in close so your attacks do enough damage. The slow, underwater effect—which at first seemed like your friend—will soon start to get in the way as you attempt to avoid certain enemies while targeting others. The game tricks you that way; don’t relax thinking this is going to be a nice day at the aquarium.

Thankfully, as you jump and thrust and fight your way around the ocean, Shinsekai gives you plenty to look at. The levels are colorful and teeming with life, filling the screen with countless elements that seem alive even if you can’t interact with them. In addition to the obvious items you’ll find along the way, you’ll often need to dig a little deeper—literally and figuratively—as you use your capabilities to locate and mine various resources to improve your suit and equipment. This is important as you won’t be able to dive deeper until you rank up your suit’s pressurization capabilities.

Athough the game’s action is played out on a 2D plane with walls and ceilings, the depth of field helps to convey a much more open design. Some of the animations and boss battles cause framerate issues, but these rarely interfere with gameplay. Being set in one big underwater world, the scenery doesn’t change too much throughout the game. Thankfully, there’s a narrative to help push things along. Why are there so many vehicles down there? Buildings? What’s with all the alien symbols and artifacts? And exactly who created the mechanical creature you meet and “befriend.”

That creature brings me to one of my first complaints about Shinsekai. You’ll use it like a drone to access items and areas you otherwise couldn’t, but doing so is surprisingly imprecise. The overall clumsiness of your diver makes sense considering the weight of the equipment and the aquatic setting, but I’d expect better from a machine that’s made specifically to cut through water. The menus and UI are clumsy, too. The game does little to explain what’s going on, and that includes telling you how and when to upgrade and repair your equipment. Menus and capabilities are presented before you can even use them, with no indication that they can’t be used. And when you can use them, it’s not always clear how to do so.

Finally, the game’s beauty comes at a cost; there are frequently large sections of mesh-like graphic imperfections as the game seemingly tries to draw its environments. I mostly saw this when playing docked mode, but that was my preferred method because the game is just too pretty to squeeze onto the Switch’s screen in handheld mode. That said, the game does recommend playing with headphones on, and I’ll say you should do that at least some of the time because the audio effects are wonderfully immersive and relaxing.

None of these drawbacks significantly detract from the game’s overall experience, which is one of loneliness and wonder punctuated by moments of action and anxiety. In the end, you’ll be glad you played through its ultimately satisfying narrative.

If you subscribe to Apple Arcade and can play Shinsekai Into the Depths on any of your Apple devices, there’s little to be gained by moving it to the Switch. But if the Switch is your only access to this undersea wonderland, Shinsekai is an intriguing, engaging, and beautiful adventure worth exploring.