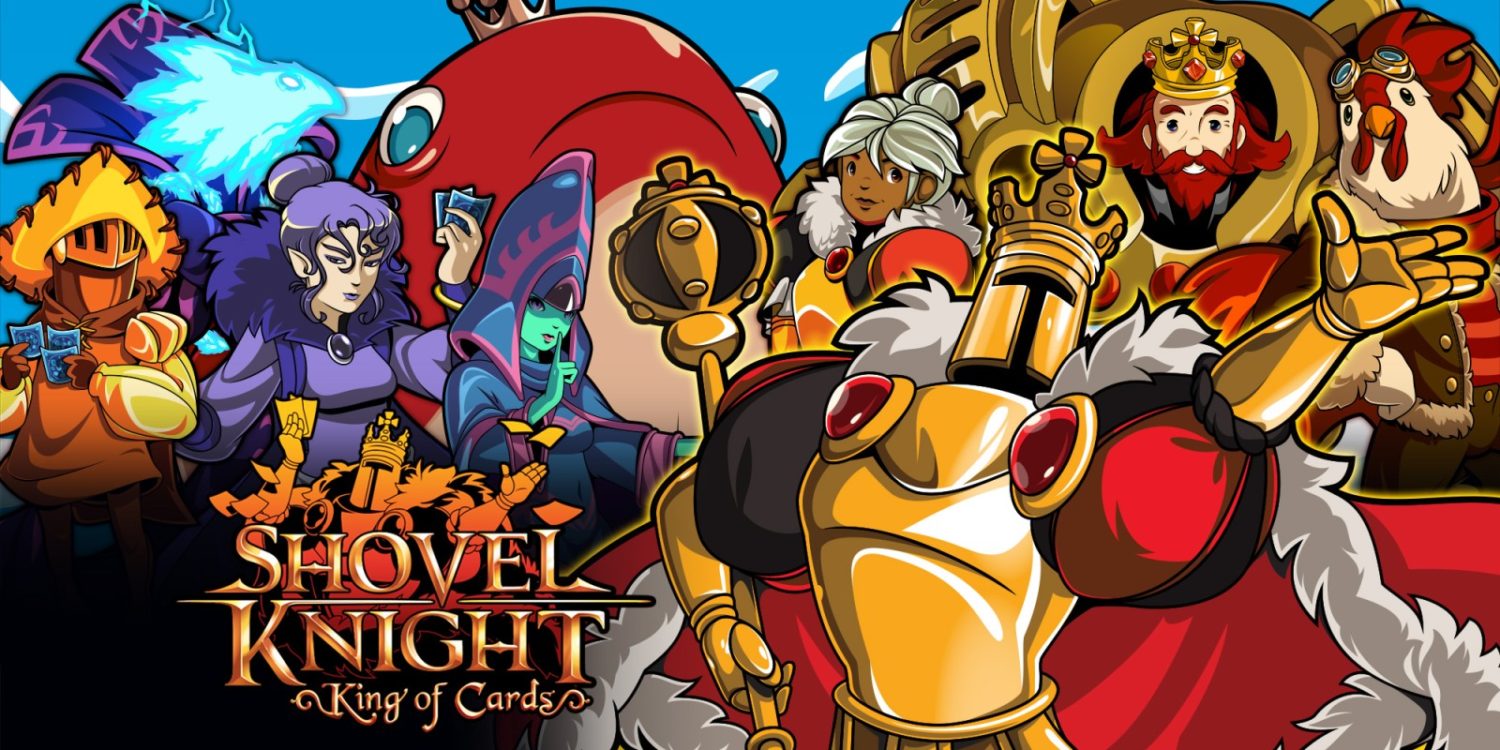 Shovel Knight is a brand that has taken the world by storm since its successful Kickstarter and several released spin-offs that make up the eventual Treasure Trove release. As the fourth entry in the series, Shovel Knight: King of Cards follows King Knight on his journey to best the Three Kings, join the Order of No Quarter, and become the top Joustus player in all the kingdoms. As a prequel to the original Shovel Knight, this title follows a journey that will see several returning characters, as well as some new faces that give this title its own sense of style and charm. Along that same line, this title features over thirty new stages, new enemies, and new bosses, along with the card game Joustus that is the most prevalent new feature for this release. Even with all of this bonus content, however, you still have a lot leak over from the previously released entries in the series, which makes some of what you are doing feel samey after the successive releases.

Starting with Joustus, you will be playing this card battle game throughout your quest and, as the defining feature for this release, it is the one that is the most important. Battling on a grid, you will have one to several gems scattered about the board that you and your opponent will have to jockey for positioning over. Cards cannot be placed directly on the gems but need to be “pushed” onto them for a capture. Each card has arrows on them that designate which direction they can push, with varying levels of strength. The directional arrows are also used to block incoming pushes, as you cannot push a card with an arrow that stands against it. This allows you to use some levels of strategy as you, not only try to grab all the gems, but also attempt to block off certain points of the board so you can win the match. Other than that, you go back and forth until the entire grid is filled with cards and the one who possesses the most gems is the victor.

Although offering a decent, spin-off mini-game, Joustus is not something that offers enough substance to be a stand-alone product. And when you consider that there is a lot of shared platforming, levels, and gameplay in the rest of this title, there really needed to be something more extravagant to set it apart in this category. Adding card games onto releases as a side project has become fairly common, but most other entries offer games with more thought and allow for a bit more interest. The fact this whole series is based on 8-bit, NES roots means you can give some leeway to Joustus, as it is designed to seem like it could run on old hardware, but it isn’t something that will profoundly affect you, even if it is just an addictive mini-game in between the series’ well-known platforming sections. Even though I didn’t find Joustus as profound as something like Hearthstone or Gwent, it offers a quick and fun break from the tough, old-school platforming and can be completely skipped if it isn’t something you fell in love with as well.

King Knight acts in a lot of ways similar to Shovel Knight but has his own flavor that makes some of the retread more interesting. Wielding a shoulder-charging attack that transforms into a spinning jump when hitting certain objects, creatures, and wall types, you can take on some interesting platforming sections and boss fights that feel all Shovel Knight, but unique as well. You also have abilities that are unleashed with “vigor” gathered from potion bottles that are dropped from enemies and breakable environmental objects. And finally, items and equipment can be used as well. The items and abilities act very similarly to that of the other Shovel Knight releases, but all in all is well-done enough to garner more praise. Platforming is as difficult as ever, but King of Cards always feels fair and the controls tight.

My biggest complaint throughout this game is just how much the levels feel re-used, or at the very least similar enough to the other releases to give me that déjà vu feeling all the time. Shovel Knight had level design down to a science, so this game follows suit and in no way am I commenting on the actual look or level-building as they are master-class, but I wish there was a bit more to make it all its own. I understand this title is set in the same universe, and thus would have similarities, but I couldn’t stop myself from feeling like I had already played parts of this one.

The old-school feel and aesthetic have not been lost in this newest entry, and although tough-as-nails platformers of yesteryear aren’t something I yearn for a return to, this game does everything it can to change my mind. Masterfully crafted pixel art and soundtrack make this an overall package that is hard not to recommend, even if it feels wholly the same as the original Shovel Knight release, outside of basic mechanic changes and the newly minted card game. If you are a fan of any of the previous releases in the series, or just like platformers in general, then this is definitely one you will want to consider for your library.

Shovel Knight: King of Cards is a master-class in platforming, design, pixel art, and much, much more. Offering a good amount of new content, as well as the all-new card mini-game, Joustus, you have an overall package that is hard not to recommend, even if good portions of this feel wholly the same as the original Shovel Knight and its successive releases.