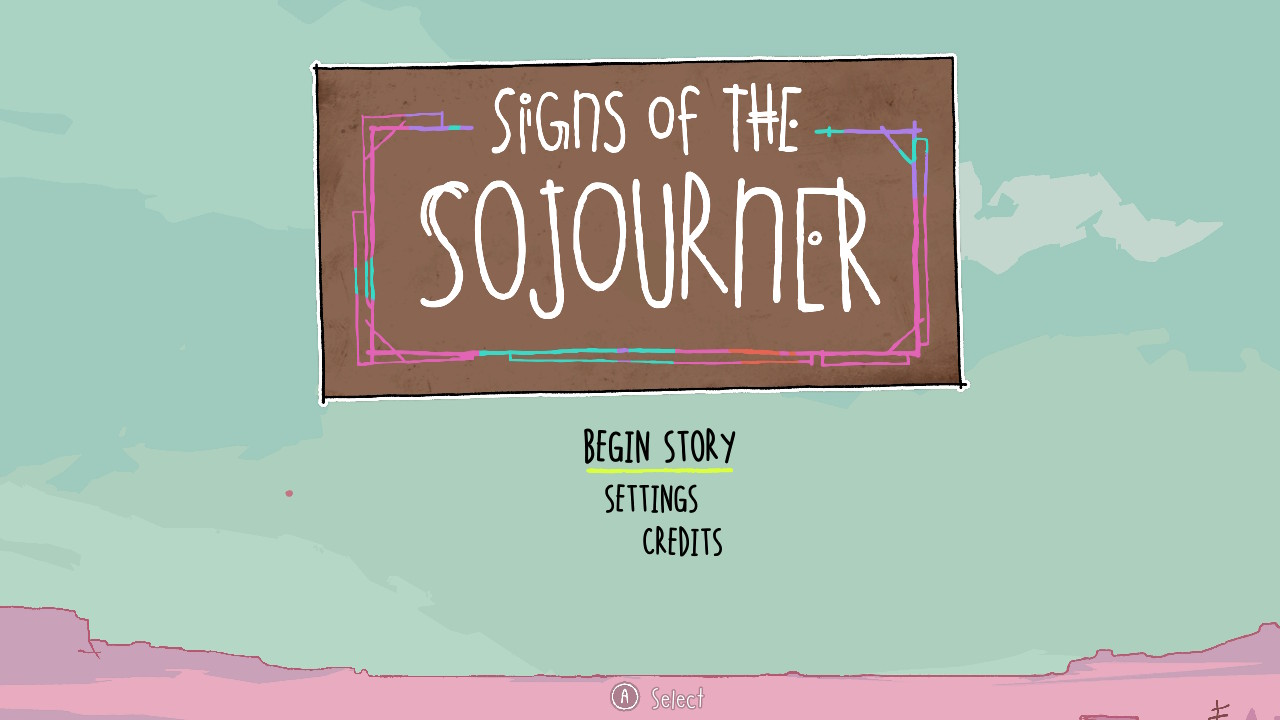 Signs of the Sojourner is a role-playing strategy game from Digerati. You play as the faceless, nameless protagonist, exploring the world and making connections with all sorts of people. It seems like a strong game, but let’s see if it holds up. 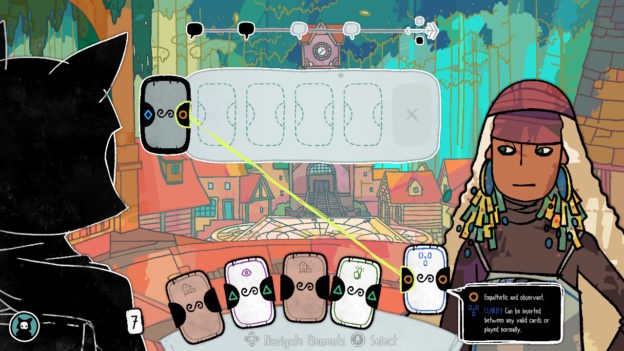 Your character takes over their mother’s store after she passes away. You travel to various cities and towns on the vast map to get inventory and build relationships with other people. You’ll also try to help these people with whatever they need to boost your relationship with them and better your hometown.

The way this happens is through cards. You have a deck of no more than ten cards with a symbol on the card’s left and right sides. These symbols resemble emotions. For example, a circle is empathy, and a triangle is logic. There’s also a square, diamond, and swirl that comes later. Each character has two primary symbols they use to speak. To have a pleasant conversation with them, you need to match their symbols using your cards. 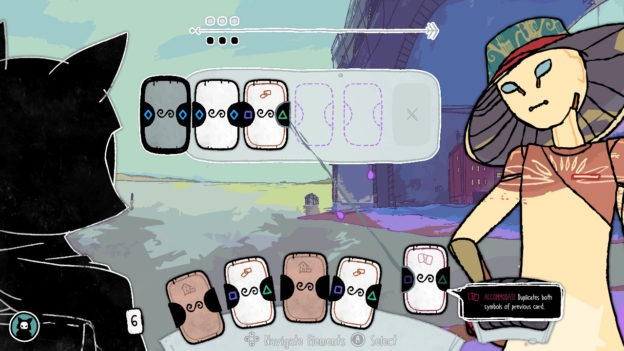 The cards can also have abilities as well. For example, when playing a specific card, you can “observe” the other character’s hand so you can plan for which symbols they can respond to. There are other abilities to reshuffle your hand, play two cards in a row, and more. 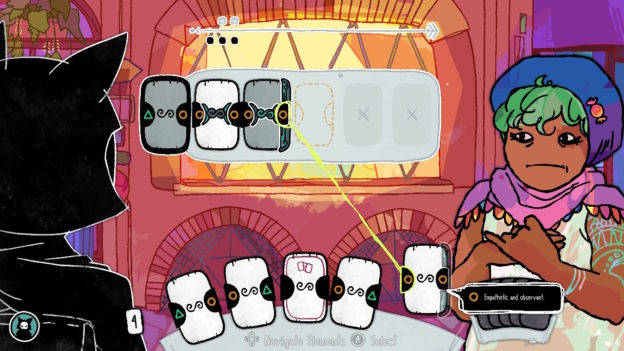 Signs of the Sojourner is a solid strategy puzzle-like game and it’s not as easy as it seems. It’s first and foremost a card game, so your hand is shuffled with each new conversation. When you play a card, a new one is added to your hand randomly from the draw pile. Remember, you can only hold ten cards total and will only have five in your hand at a time. You can’t control which cards you get. 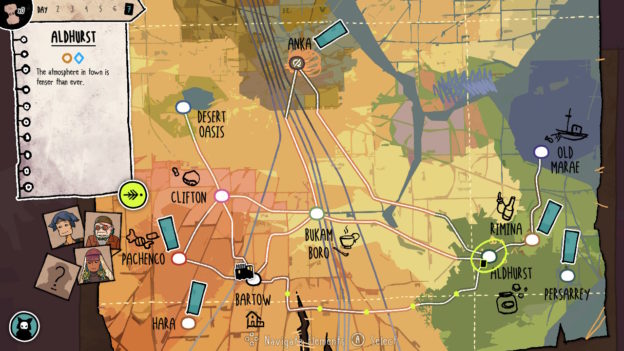 You can’t expect to have a pleasant conversation every time, but this is why the randomization got to be frustrating. There were times, especially toward the end of the game, I couldn’t do anything with the cards I was dealt. So it was, more or less, an automatic loss for the conversation. Not having good conversations means some people won’t sell stock to you for your store, or they’ll be put off by you.

I can’t be upset over the random shuffling of cards, though. That’s every card game. What annoyed me was that there are no upgrades. I thought, after a while, I’d be able to upgrade my deck so I could hold more than ten cards at a time. It would make conversations a bit easier if I had more to choose from. That’s not the case, though. You’ll always have just ten cards and have five at a time in your hand. 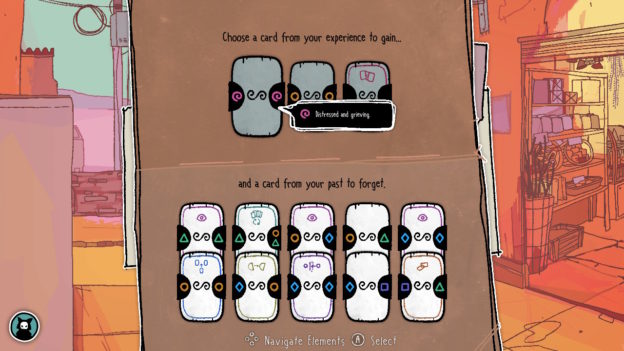 You can get new cards, thus adding a mixture of new symbols to your deck after each positive conversation. They’ll give you one of their cards, and you’ll need to choose a card from your deck to replace it with. You have to do this, too; you can’t decide not to accept one of their cards. Between five symbols in various combinations, having just ten cards total was rough.

There are multiple endings, and I lost my mother’s store during each playthrough. Maybe that’s the point, or perhaps I’m just not as good at cards as I thought I was. I’m all for a challenging card game, but the difficulty felt unbalanced between the number of cards you could have versus what you could hold. 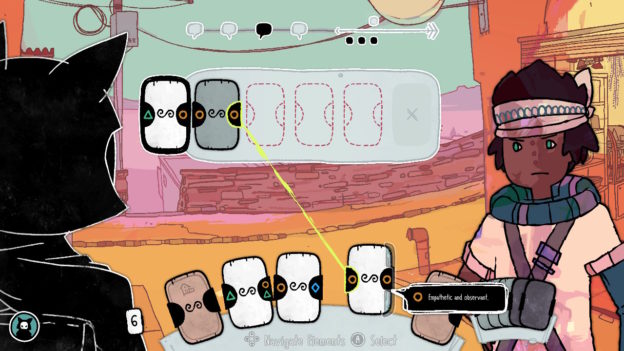 Not to mention, there are also “fatigue” cards that you gather during your travels. These cards don’t have symbols and won’t match anything, so they just take up space. The only way to get rid of them is to go home, unpack your items, and rest, before traveling again. The thing is, you can only travel six times before the game ends. So, time is limited on top of everything else.

I will say the music was soothing, and the art style was beautiful. It’s easy enough to learn, and you’ll get the hang of it after a while. It’s just the RNG that will throw you for a loop. As frustrating as it was at times, I still enjoyed my time with Signs of the Sojourner. It’s certainly worth checking out.

Signs of the Sojourner is a good, challenging card game that has more at stake than expected. Replayability is high as you create various decks, befriend new people, and try to get that good ending.