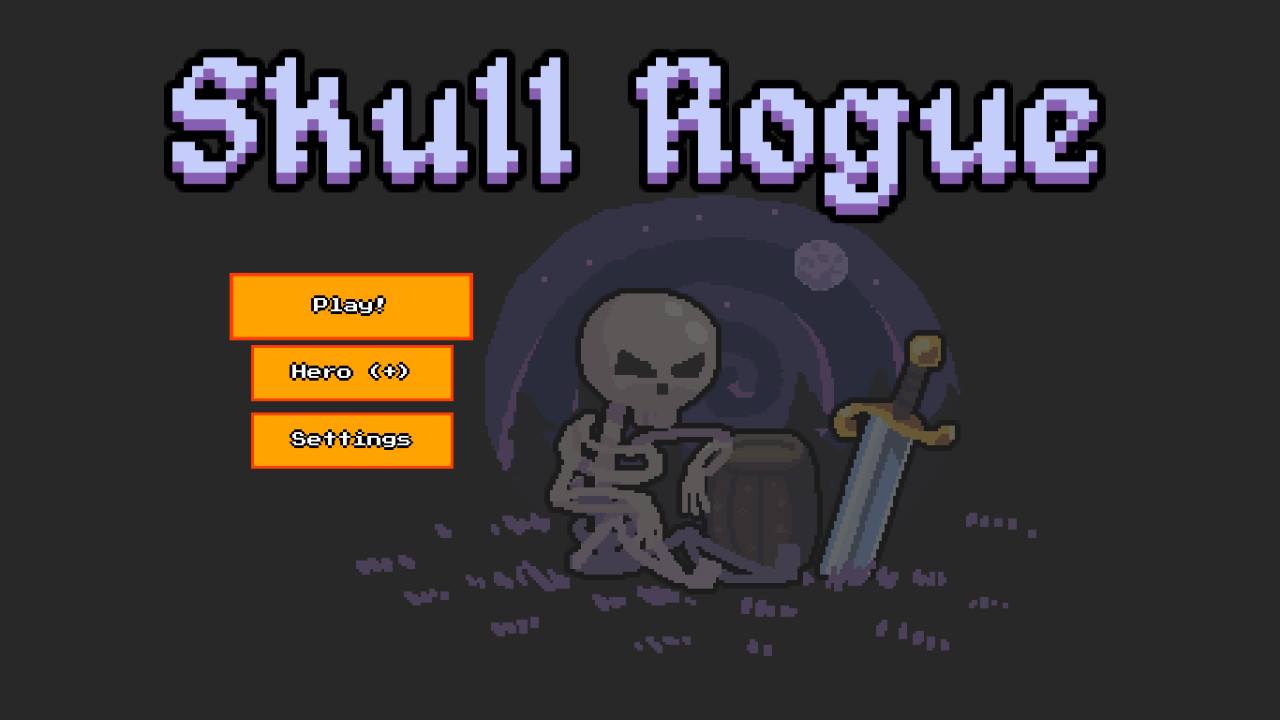 Skull Rogue is an endless adventure game with randomized rooms in a dungeon. You play as a skeleton defeating waves of other skeletons before moving onto the next room. There’s no story or rhyme or reason as to why you’re there. The point is to see how far you can get in the dungeon that has an endless amount of rooms. 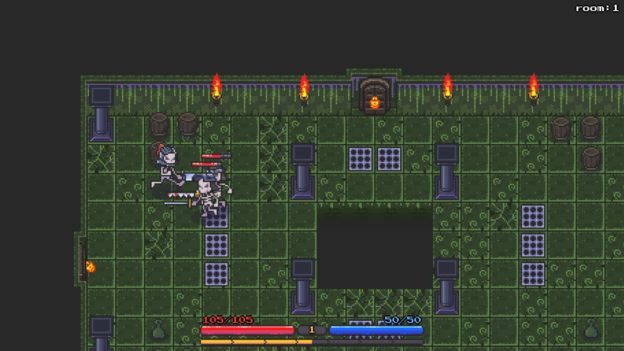 When turning on the game, you’re faced with the main menu that allows you to jump into the game or boost your hero. When you click the “Hero” button, there is a list of stats: health, mana, attack range, explosion range, health regeneration, and mana regeneration. The game allows you to earn “learn points” as you play so you can boost your stats and get stronger each time to enter the dungeon.

After playing this game for some time, I haven’t quite figured out how you earn learn points. You may get points when you clear a room or maybe when you level up. When you defeat enemies, you gain experience and level up. As far as I know, leveling up doesn’t do anything. It was never explained. 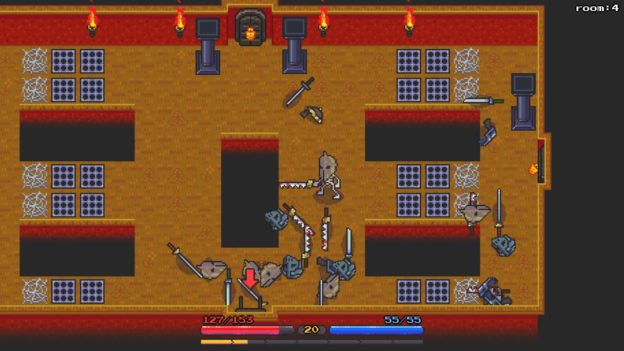 Let’s head into the dungeon, though. Each room is randomly generated with a different biome, though this doesn’t change anything but the colors and background of the actual room. Each room is different, however, there are only a handful of layouts. These layouts include holes in the floor (thankfully, you can’t fall in them or else this game would have been a lot harder for me), spikes on the floor that will damage you, and spider webs that will slow you down as you walk on them.

There are also barrels and vases that you can break. Sometimes, a health or mana potion will drop. Luckily, these don’t disappear. So, if you don’t need it right away, you can grab it before leaving the room. However, your health and mana regenerate. Depending on how high your stats are, they’ll regenerate quick so the potions aren’t needed most of the time. 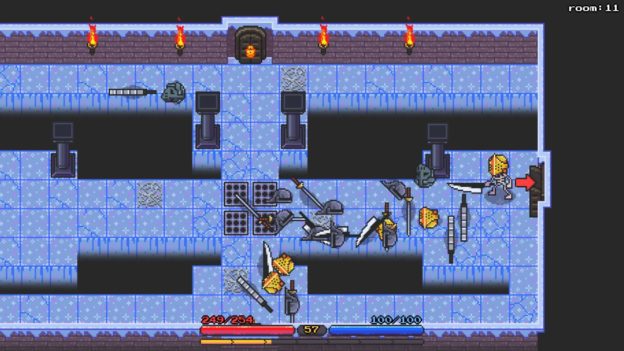 Each room, as far as enemies go, is the same. Two skeletons generate, and once you defeat them, three appear. Then four, then five, and then the room is cleared. Upon defeating the enemies, they’ll drop their weapon and helmet. You start dealing 20 damage and have 100 defense. The farther along you get, you can pick up the enemies’ weapons and helmets, so you can boost your attack and defense.

There are two ways to attack – with your weapon or bombs, which uses your mana. The bombs one-shot the enemies, and the explosion range will grow as you boost that particular stat. This means you can drop a bomb in the middle of the room, killing all the enemies in one go. You don’t have to move or swing your sword. 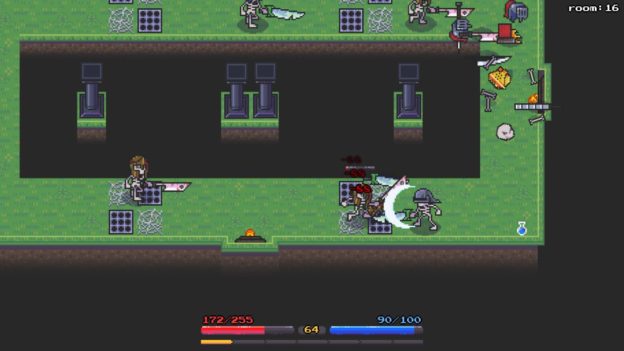 I enjoyed my time with Skull Rogue, especially in the beginning. However, you grow alongside the enemies. When they get stronger, you gain their weapons and helmets, making yourself stronger. You’re always faster than them as well. This isn’t necessarily a bad thing, but it does make things easier. The enemies don’t get faster, and the waves are always the same. I think it would be cool if, the farther you got, the enemies got faster or there was an extra wave of six or seven skeletons attacking you. 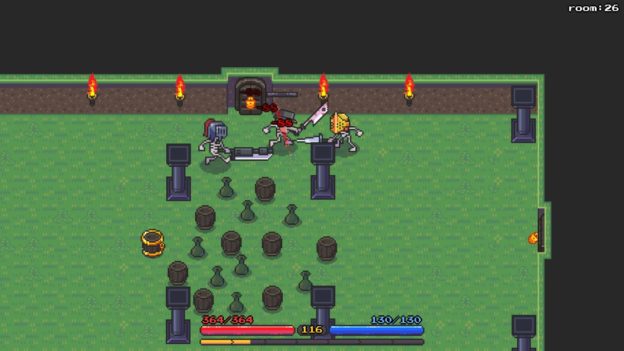 My stats were so high that I found myself standing in the middle of the room repeatedly placing bombs. The explosion range, thanks to my extremely high stats, covered the whole room. My mana was so high that I was able to place the bombs one right after another for all the waves of enemies to be killed right as they appeared on the screen. I felt like I was speed-running the game.

I made it all the way to the 106th room before I got bored placing bombs and allowing the enemies to kill me. After that, I had 168 learn points which allowed me to boost each stat 28 times. So, the next time I play, I’ll be way more overpowered than I already was. 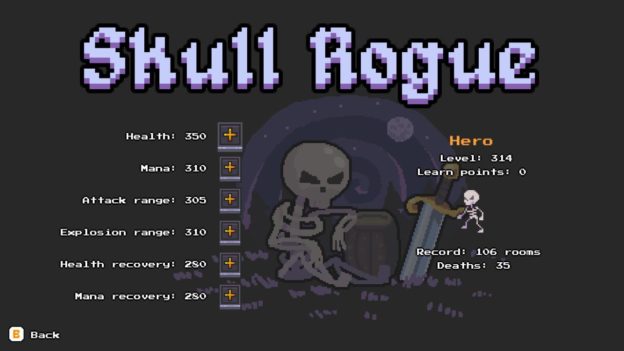 The controls were simple and responsive, which was great. Gameplay aside, the pixel graphics were pleasing to look at it. There was one song on a loop and, after going through 106 rooms, it got old. It was a dire tune perfect for a dungeon, but I wish there were more music options other than simply turning the music off altogether.

Overall, Skull Rogue was fun, and it was a challenge in the beginning. The challenge quickly ran out as I grew so overpowered that the gameplay became monotonous and I didn’t have to try anymore. Since this is an endless adventure, I’d love to see just how far I can truly get. However, I don’t think I’d have the patience for it.

Skull Rogue is a unique endless adventure. The gameplay is simple, and the idea to beat your previous record is fun. However, what starts as a challenge quickly becomes too easy.