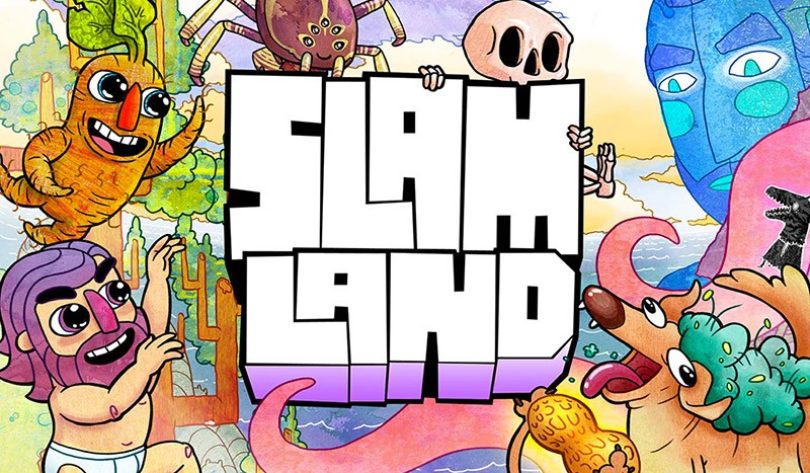 Slam Land is a very interesting game–nuff said. Review done, let’s pack it up :) In all seriousness, Slam Land has some definite fun to it, but it’s a bit of a shallow experience. 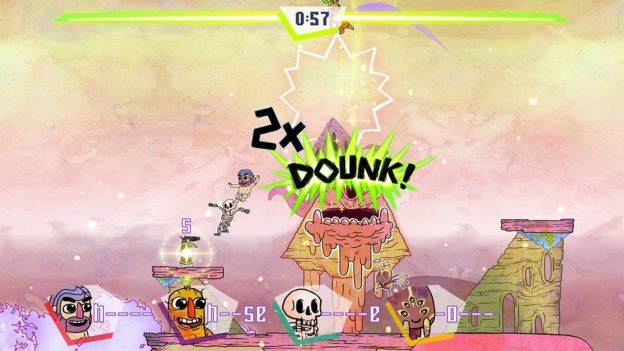 The gameplay in Slam Land is very reminiscent of Super Smash Bros. However, this time players are tasked with dunking their opponents into hoop-like areas rather than knocking them off the screen. Some of them look like large mouths of giant worms and others are just large glowing areas. There are a variety of levels each with their own layout and strategy of how best to dunk other players–some levels even contain multiple “hoop” areas. The game has some of the chaos found in Smash Bros. but not the same payoff. Dunks felt more random than anything and times where I thought I was executing a perfect grab/dunk combo resulted in me missing the mark completely. The gameplay seemed very hit-or-miss especially when it was choosing which character grabbed another character. If you were grabbed first, you’re basically along for the ride for a couple seconds until you get dunked. 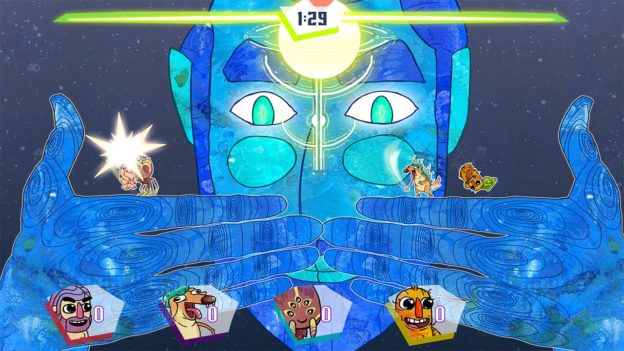 There are ways to do mid-air grabs and an arrow pops up telling you where to launch the player. You can use the analog stick to dictate the trajectory after a mid-air grab, which is cool, but it almost never worked out as I planned it. The game features five modes: Slam Tour, Peanut, Horse, Trash, and Quick Play. Slam Tour goes through five rounds in set levels and modes: time battle, trash, time battle, trash, and finally trash again. At the end of the ‘tour’, this blue giant says “I Love You” to the winner. That’s really all there is to it–you can finish this mode extremely quickly. Players can change the amount of time for each round, but otherwise, the options are locked in the Tour mode. 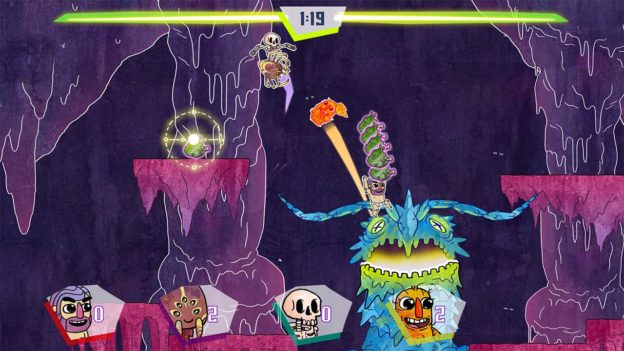 Peanut mode sees players picking up peanuts and tossing/slamming them into the hoops. The longer players hold the peanuts, the more value they are worth when dunked. Horse involves picking up horse-like objects with the letters “h”, “o”, “r”, “s”, or “e” above them. Slam one of each letter to spell “Horse” and you win. Trash mode is like the Peanut mode, only you don’t get any extra points for holding trash longer, but you can stack trash which allows for multiple points when dunked. Finally, Quick Play allows players to do Time battles or Stock battles (set number of lives for each player like in Smash Bros.) and any other custom options they want. Groups of up to 4 players can compete through ten different levels. Each mode offered a slightly different approach, but they ultimately didn’t have any legs. After a match or two, you and your friends will probably opt to play something else. One thing that was sorely missing was an explanation of the rules for each mode. Some were fairly obvious, but some took some time to figure out. A simple ‘Help’ option or brief sentence for each mode would’ve been nice. 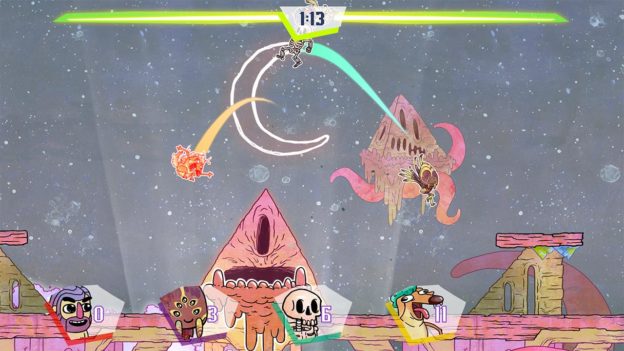 Slam Land has at least one redeeming quality. The art style is very unique–I haven’t seen anything quite like it in a video game before. It’s trippy but somehow works really well with the subject matter. The menus and interface were all really well done as well.

There’s not a whole lot to Slam Land. The game is only $7.99 but I don’t think you’ll get much value from the game even at that price. The gameplay loop just isn’t satisfying enough. It’s a simple premise and results in an overly simple game.

There’s not a whole lot to Slam Land. The game is only $7.99 but I don’t think you’ll get much value from the game even at that price. The gameplay loop just isn’t satisfying enough. It’s a simple premise and results in an overly simple game.