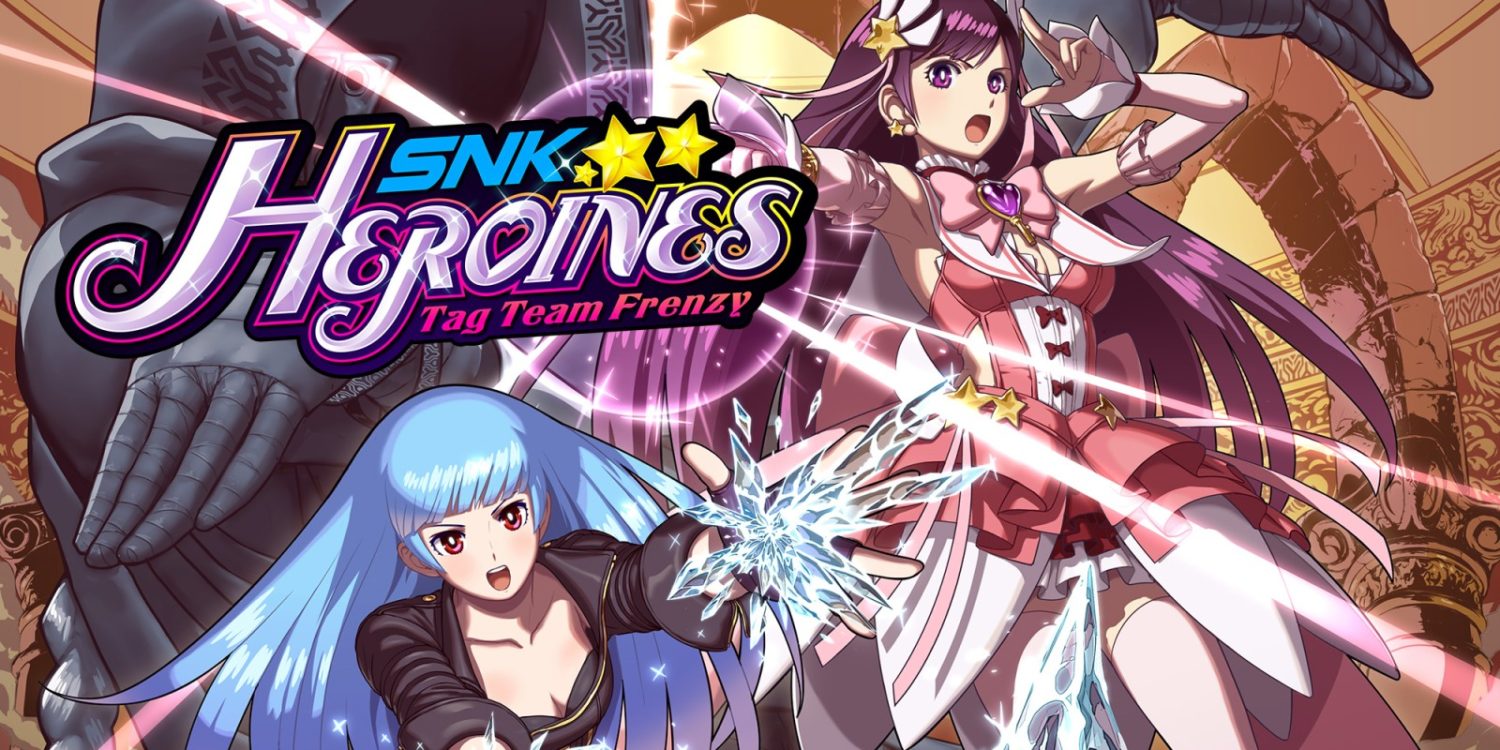 SNK Heroines: Tag Team Frenzy is a fighting game published by NIS America. It takes 14 classic femme fatales from the likes of the Fatal Fury and King of Fighters series, does .. something .. with their physiques, and mashes them into a tag team-style brawler. Let’s find out how that works out for them.

Straight from the outset, SNK Heroines is a mixed bag. On the plus side, it’s easy to pick up and play, with simple moves that mean novice fighters can enjoy the game. Unfortunately, it also lacks the depth of a true fighter that would normally appeal to fans of the genre, so it misses the mark a little there. 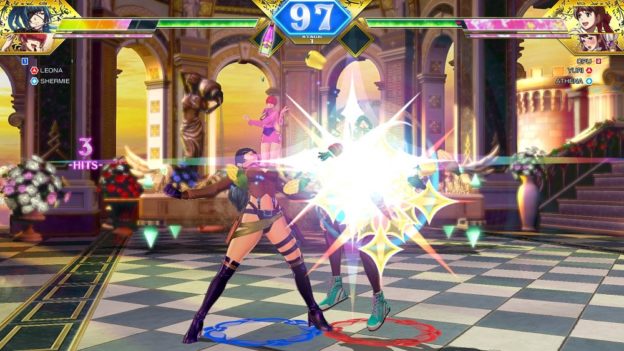 The over-the-top Story Mode features a crazed demon antagonist – the only male in the game. He’s trapped our mademoiselles, using their fear to help bring his dimension into ours. It’s a ridiculous plot and, after six measly rounds, it’s all over way too soon. The demon himself isn’t even playable after the end credits have rolled. In fact, there are no unlockable characters, with all fourteen heroines available from the start. It makes it feel like there’s not much to work toward.

There are plenty of other modes and options to give the game some longevity. At first glance, the menu looks to be overflowing with things to do. Apart from the Story Mode, there are two other fighting modes: Battle and Online. Battle is essentially for local play and is where you’ll find the training ground, tutorial, versus mode, or survival mode. Online is a way to fight with other players around the world, with quick matches or game rooms on offer. 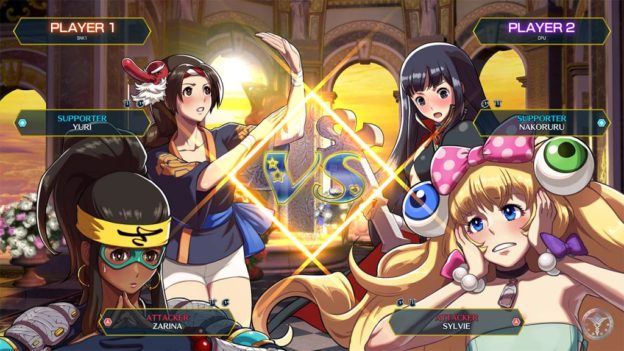 Then there’s the more detail-centric side of the game, with the Gallery, Profile and Data modes. These give an in-depth view into every aspect of your time with SNK Heroines, from customizing your characters’ looks and reliving unlocked footage, to checking your win-lose ratio or which tag team is your favorite.

The fights themselves are fast, fun and look good, with vibrant colors and smooth graphics. The movesets are easy to master, with special moves mapped to simple button configurations. Each fighter has unique moves, but the buttons are the same. They also differ in movements, which seems to be dependent on height. Shorter gals are quicker and more nimble than their taller counterparts, who jump less high and move a little more slowly. 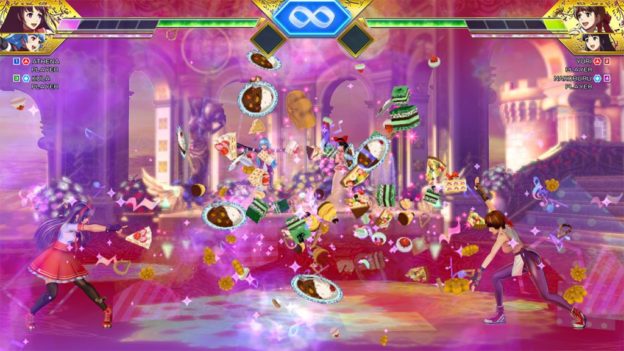 Battles are over pretty quickly, consisting of only one round – there are no tie breakers here. It makes gaming on the go or a quick bout with friends easier, but it also means you’ll tire of fighting sooner rather than later. The other interesting twist on the usual fighting style is the way it all ends. Depleting your opponent’s life meter doesn’t guarantee victory – there’s also a special kind of finishing move that you need to apply in order to truly win. This is called a Dream Finisher. This uses your Spirit Gauge and adds a slightly tactical aspect to the gameplay. You can also use your Spirit Gauge to pull off special moves during the fight, so you’ll need to keep enough to finish properly.

I feel like I have to mention the elephant in the room when it comes to the fighters. The characters are obviously enhanced, busty versions of the original heroines. It’s no surprise that they’re also scantily dressed – this is apparently how we girls fight – and it’s something the characters seem to notice via in-game dialogue. Being self aware and tongue in cheek is fine, but why is a fighting game with only female characters dumbed down in terms of gameplay? And why is a male character the oppressor? As a female gamer myself, I can’t help but wonder who the target audience is supposed to be. This game tries to walk the fine line between girl power and exploitation, but I’m pretty sure a game without any female characters would be unacceptable today; the rules should probably be the same for everyone. 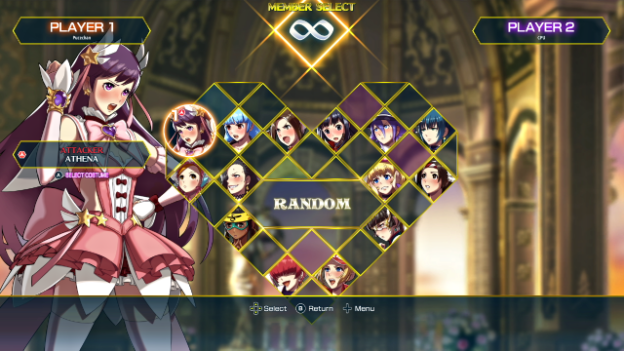 Overall, SNK Heroines: Tag Team Frenzy is well presented and simple enough for anyone to pick up and play. The finishing moves and tag team antics keep things feeling fresh, setting it apart from other fighters. There are some limitations though, like the short Story Mode and the shallow gameplay, not to mention the alienating presentation of the heroines themselves, providing a fun factor on a more short-term basis.

SNK Heroines: Tag Team Frenzy is a mixed bag – some fun twists make this a great fighting game for quick bouts, particularly for novice fighters. Unfortunately, the lack of depth makes it a short-lived experience. And the less said about the girls’ appearances, the better.