Review: Sonic and the Secret Rings

Sonic and the Secret Rings for the Wii sets out to change people’s minds about the Sonic franchise for next-gen systems. Just a few months before the Secret Rings release, SEGA released Sonic the Hedgehog for 360 and PS3 which received a critical reception. Reviews were abysmal for the game and people thought the Sonic franchise had lost its luster since making the 3D transition.

When you first play Secret Rings, you’ll notice a totally different storyline and gameplay to that of its 360/PS3 counterpart. SEGA worked independently on this game and tried to build it from the ground-up on the Wii. The game takes advantage of the Wiimote for all of Sonic’s moves. Tilting left and right will make Sonic move side to side, and thrusting forward will allow Sonic to do a jump dash at enemies. The controls can feel slow and clunky at times, but they (surprisingly) get better as you progress through the game. 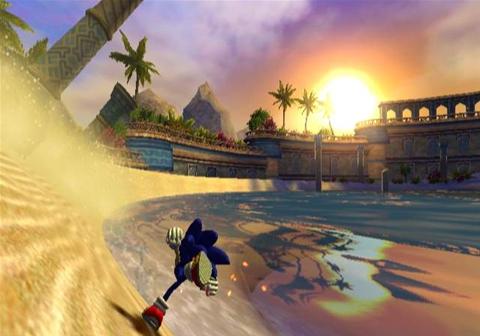 The storyline is set in an Arabian Nights world complete with deserts and many other exotic locales. One of the first things you’ll notice about the story, is the number of cutscenes and voice-commentary that accompany it. The game allows you to skip all the cutscenes, but you can miss out on some important story items. The voice-acting is one of the worst in video games that I’ve heard. It was almost imperative for me to skip all the cutscenes since I couldn’t stand the voice actors or the dialogue. Also, the in-game music is the worst rock music I’ve heard and it repeats itself over and over throughout the menus. If you have a stereo or iPod handy, now’s the time to use them.

The gameplay is classic Sonic 2D-fanfare. The game is on rails so you can happily speed through the levels without stopping along the way. Secret Rings also employs a leveling up system whereby you learn new abilities and get speed upgrades as you level up. This is a nice addition, but it also took away from the experience—for instance, when you first start the game, you start out pretty slow since you haven’t leveled up yet. As you gain more levels, you gain more speed and abilities;consequently increasing the game’s fun. But you literally have to drag through the first 5 or 6 hours of the game before it gets fast and fun. Why not make Sonic fast to begin with? Who knows. 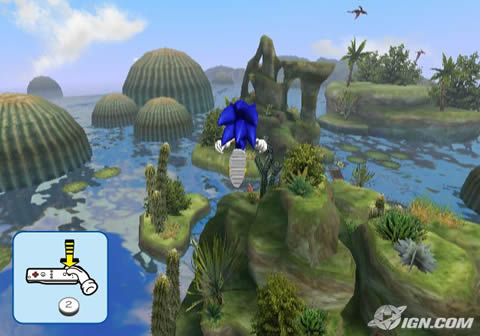 Now on to the visuals of Secret Rings. The game has pretty good graphics as far as 3rd-party Wii games go. Sonic is very detailed and a lot of the textures, although not super high-res, add to depth of the gargantuan levels. The huge levels is really where the game is fun. You have these massive levels to go through and different missions take you on different paths throughout the levels. Sometimes it’s more fun to see how fast you can complete a level than actually play through the missions.

SEGA made a valiant effort with Sonic and the Secret Rings, but there are still some flaws in the controls and the presentation. However, they are definitely heading in the right direction.

Visuals: The visuals are sharp and stunning. Reflections off of water and lighting make the world more full and realistic. Sonic himself looks like the blue-haired hero we all remember with some graphical enhancements. The huge levels are really where the game excels while still keeping a solid frame rate.

Gameplay: The game almost succeeds in bringing the franchise into 3D. There are still some hitches in the gameplay that make places in the game feel clunky and unfinished. Even the parts where the game is supposed to excel (speed), it falls short in a lot of areas.

Replay Value: The game does have a 4-player multiplayer mode that offers a number of minigames utilizing the Wiimote/nunchuk. The games range from really fun to ‘why did they even try’. The single player offers some more power-ups and items, but nothing really after the main story is completed.

Wii Innovations: The game uses the Wiimote sideways to control Sonic’s movements. The motion controls were executed well, but the limitations of the game sometimes hurt the overall experience.

Verdict: SEGA makes a great first effort with Sonic and the Secret Rings, but there are still some things that need to be ironed out. If you’re a fan of the series, this is definitely worth a rent or even a purchase. If you’re not a fan, the number of faltering points really make this game only worth a bargain buy or rent.