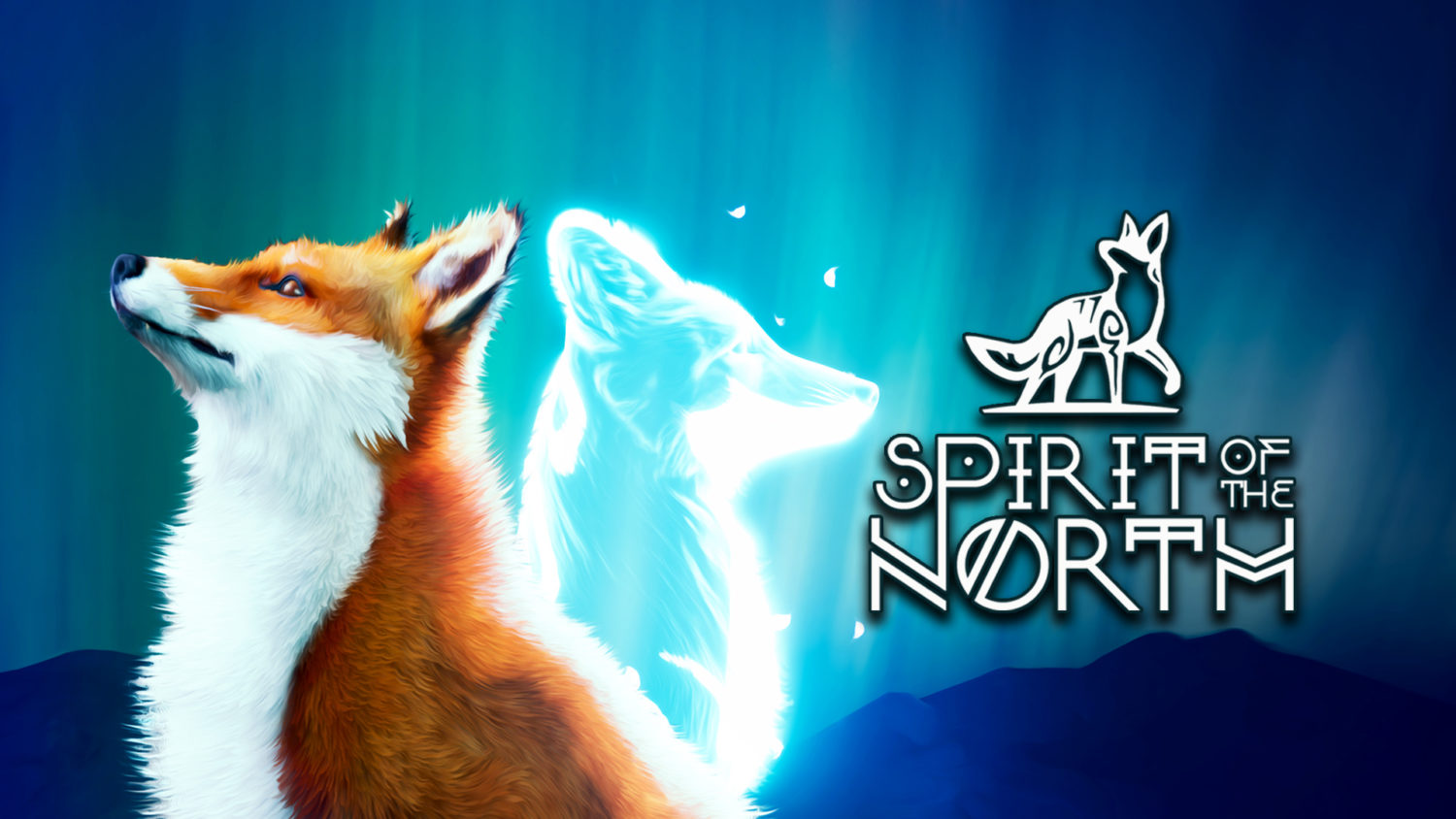 Spirit of the North is the type of adventure game in which you could get lost. In parts, that’s by design, but in other parts, it’s by accident. This creates a somewhat disjointed experience. But who knows? Maybe that’s just the way it is for a fox.

Throughout this entire puzzle adventure, you play as a nameless fox wandering—or, more accurately, searching the landscapes of Iceland for…something. Or, maybe you’re not searching. Maybe you’re just being guided towards something by a spirit fox who, according to the game’s description, is the “guardian of the Northern Lights.” Spirit of the North gives you no setup and no dialogue throughout the game. Everything you know and learn is pulled from the game’s wordless cutscenes and puzzle elements. 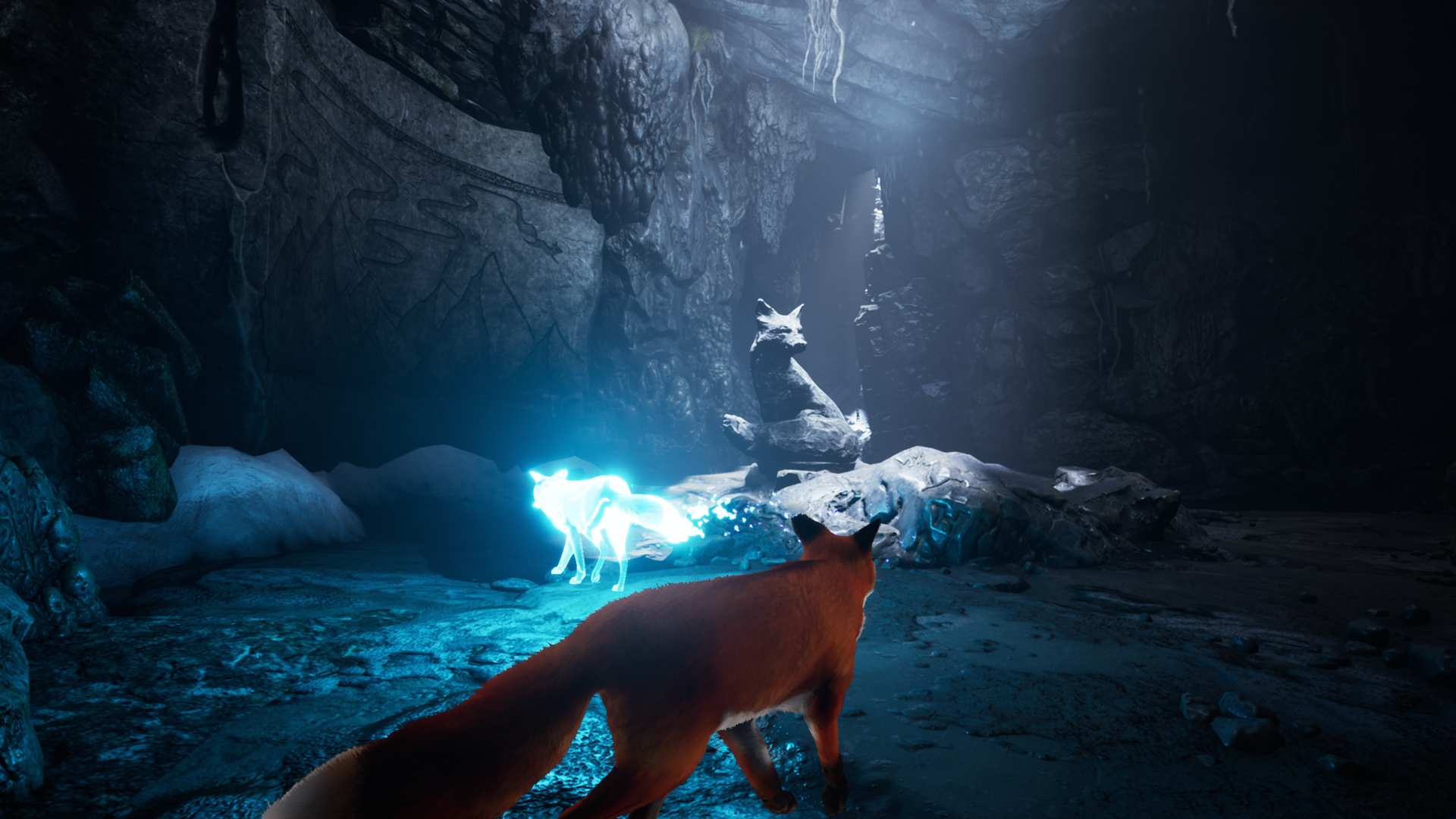 So, the purpose of it all is to get from point A to point B. Visual cues tell you where to go: sweeping camera shots, your spirit fox guide, a red trail in the sky. There are times in the game when the environment opens wide around you, but exploring it all provides little reward. This is mainly a linear tale with environmental puzzles to solve in order to access the next area.

Controlling the fox through these areas is fun and frustrating in turn. When you’re running through the countryside, taking in all of the game’s visual splendor, the effect is rather cool. As we learned from games such as The Legend of Zelda: Twilight Princess and Okami, controlling a lithe, four-legged animal is surprisingly fun. It’s a bit harder, however, when you need to calm the beast to line up and time jumps to access out-of-the-way areas. The controls allow you to slow down the fox to make this a bit easier, but there were still times when I had to attempt tricky leaps nearly a dozen times to land them. Getting to that area only to find I didn’t have what I needed more than once prompted me to quit the game. 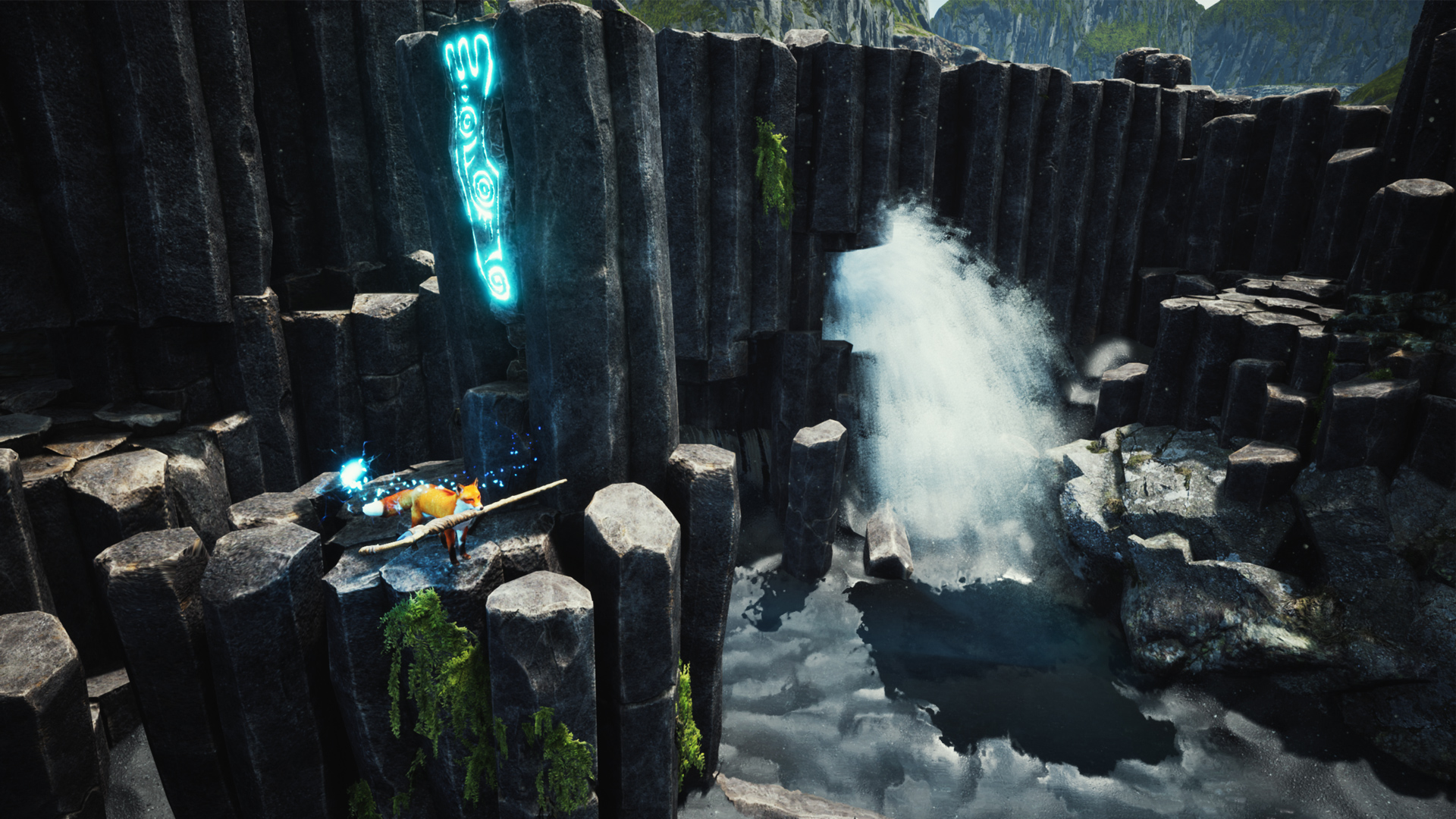 This brings up two issues. First, you can’t determine when to save your game, so you’ll be returned to your last auto-save if you quit before reaching the next chapter. Curiously, if you do make the next chapter and quit, then select continue when you next start up the game, you’ll be returned to your last auto-save in the previous chapter. You have to specifically select the new chapter in order to start there. Weird.

Second, one of the continuing puzzle elements in Spirit of the North is the mystical power provided by the spirit fox. It’s used to activate stones, murals, and such that unlock new areas, but it needs to be powered up by “barking” in front of blue flowers. This makes you look all Tron-like, and hitting the X button passes the spirit power onto the mural. This comes into play a lot, so you’ll always want to make sure you’re powered up. Finally, accessing one of these only to find out you need that power is quite disheartening.

Then there are the staffs. You’ll find these scattered throughout the game, and you can pick them up with your mouth to return them to their dead owners—skeletons scattered around the landscape. This is mainly for achievement purposes, as you’re shown a graphic of how many you’ve found (and missed) each time you release the spirit of these fallen travelers. 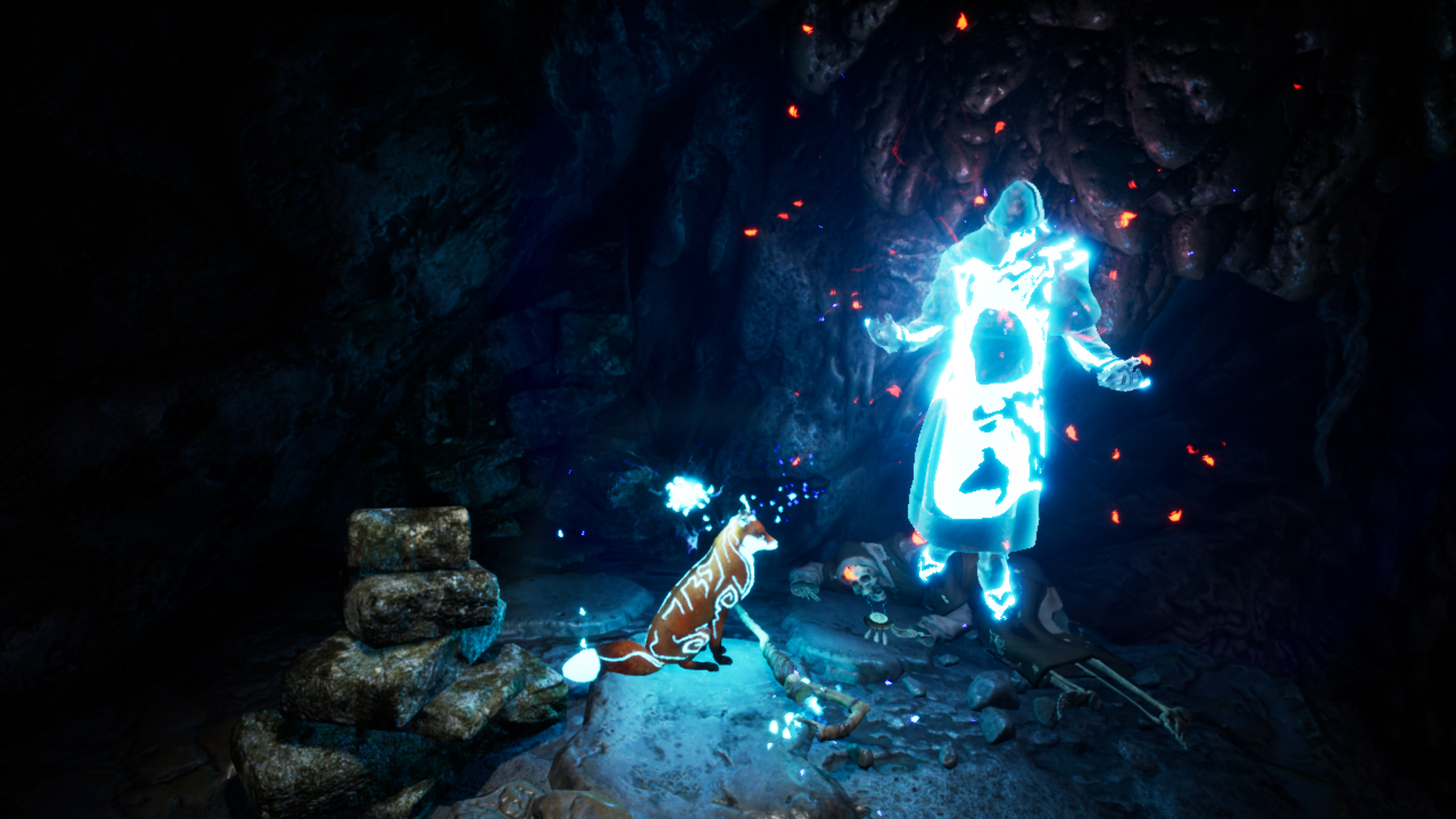 There are a few points, however, where it’s required to progress. As such, each time you find a staff you should definitely pick it up and find its owner. Otherwise, you could spend quite a bit of time backtracking at certain points.

Despite my complaints, I found Spirit of the North to be a generally enjoyable experience. The mystical depiction of Iceland was rather lovely and surprisingly varied (based on the harshness of the first chapter, I expected nothing but ice and snow throughout). 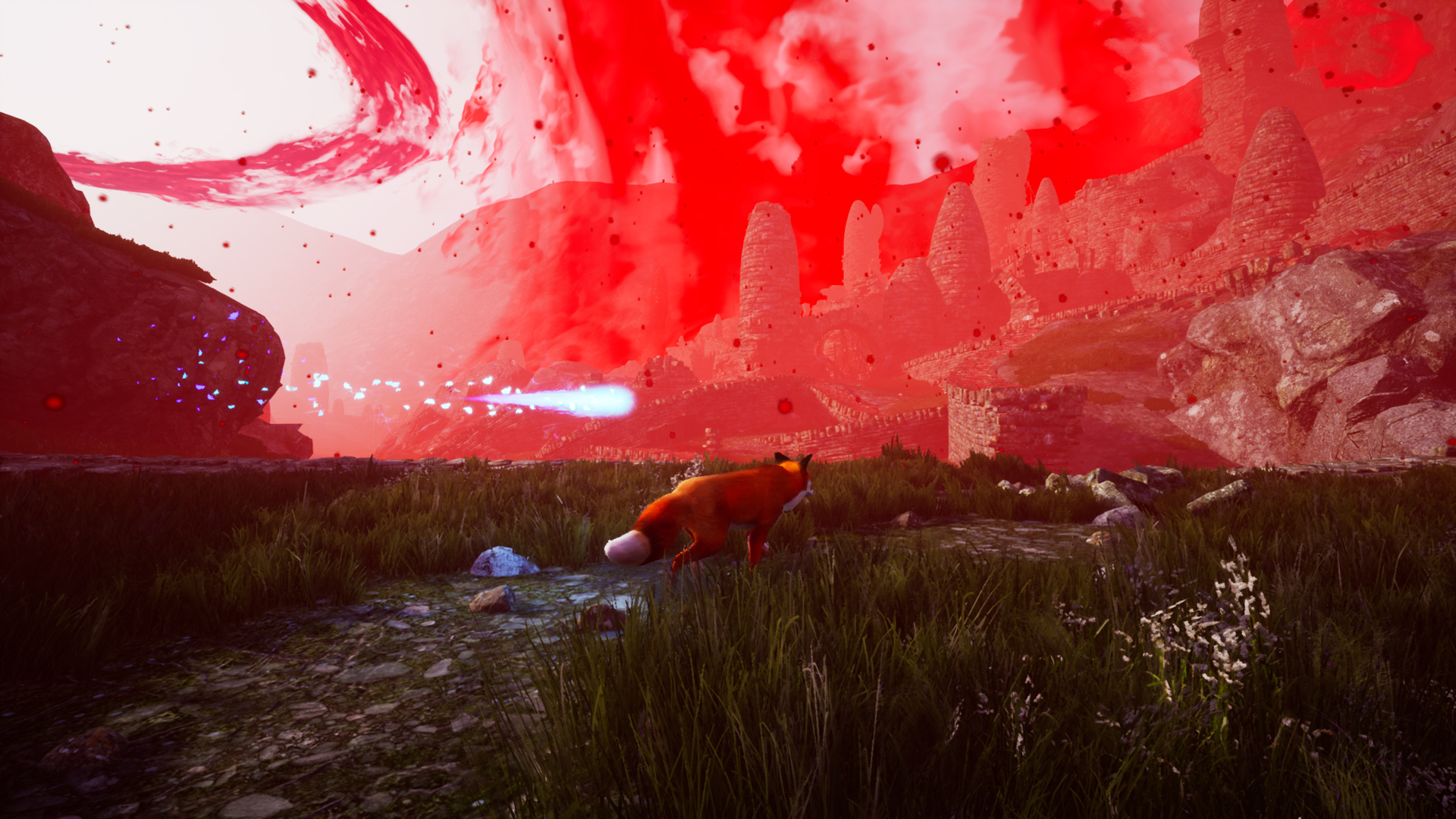 I also grew rather attached to the fox, and I felt genuinely bad for him in certain parts. I couldn’t figure out why his fur was sometimes coarsely detailed and other times perfectly smooth, but we’ll blame that on the weather instead of character design. And despite my issues with the steps required to unlock new areas, it always felt rewarding when I did.

I completed Spirit of the North in about five hours. There’s not much reason to replay it, other than perhaps to find all the dead guys. But those five hours were generally rewarding and, perhaps more importantly, calming. Perhaps it’s the current predicament in which we all find ourselves, but games with just the Earth and its creatures—no people, kingdoms, guns, or diseases—is just what our spirits need right now.

Spirit of the North is an atmospheric, evocative adventure game with puzzle/platforming elements that—despite being clumsily implemented in parts—are ultimately rewarding if you stick with it.