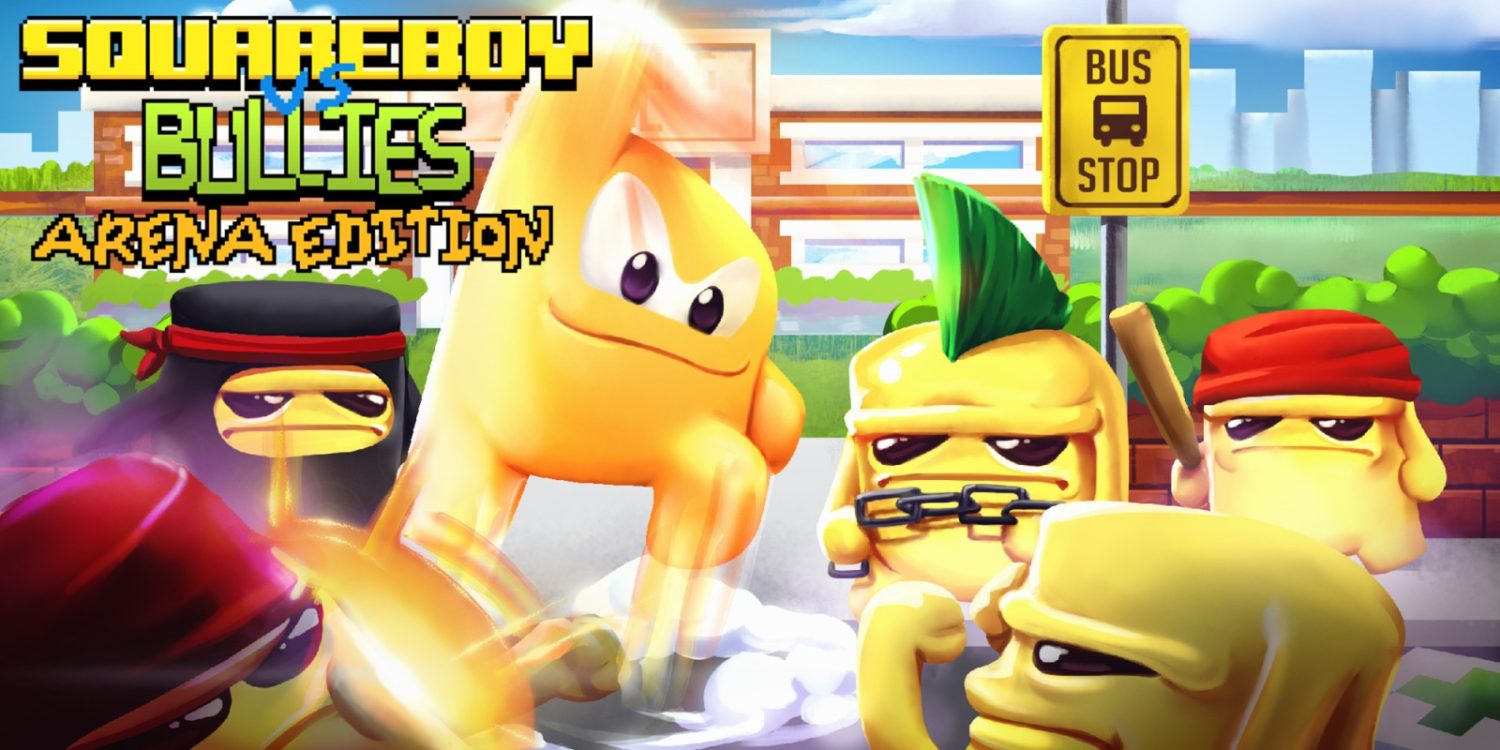 As a retro beat ‘em up, Squareboy vs. Bullies: Arena Edition for the Switch is what you’d typically expect from the genre. It’s simple, easy to control, and will certainly knock you down if you aren’t paying attention to each enemy on screen. What you see is what you get with this title from Rohan Narang and developer Ratalaika Games  However, while Squareboy for the Switch is a fun and neat throwback in both design and look, it unfortunately succumbs to its own shallowness. 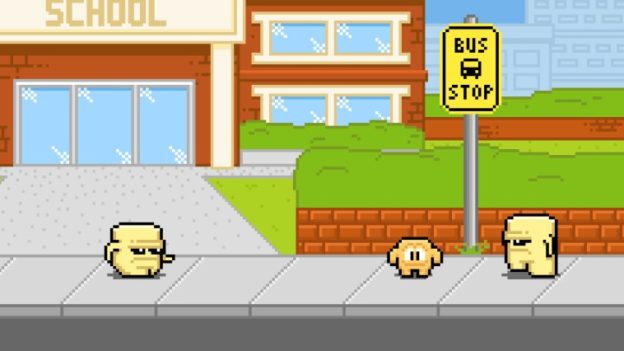 Originally released for free on iOS and Android devices, Squareboy vs. Bullies: Arena Edition has you in control of the titular Squareboy. You see, Squareboy is sick and tired of all the bullying he’s endured lately and it’s time for you to put all those bullies in their place. From there, you will engage in a short training session with your sensei and then proceed to pummel every bully you encounter screen after screen. That’s purely the gist of the story to Squareboy and its 12-plus levels of bully-beating antics, so don’t expect it go any deeper than that.

The gameplay, as briefly mentioned, is pretty straightforward as an old school beat ‘em up. You control Squareboy as you punch, kick, and even block your way through waves of bullies wanting to make your journey all the more difficult. Many of these bullies come in different varieties with each wearing a different piece of headwear. Some wear construction hats whereas others are dressed head to toe as a deadly ninja. In addition, some will fire projectiles such as baseballs, throwing stars, or construction tools. 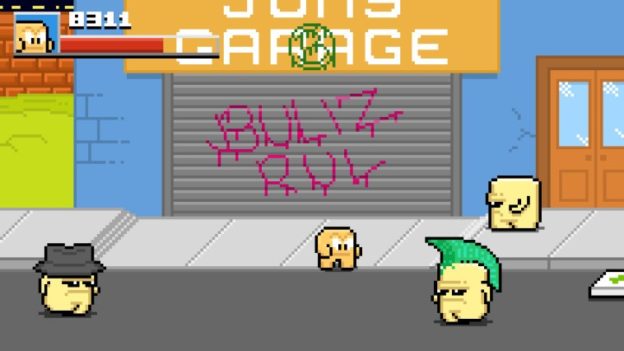 It’s crucial to pay attention to these bullies’ details as you will be wanting to concentrate on how to defeat which one first without being cornered. Do you start off with the weaker hat-less bullies or do you engage and defeat the tougher ones so that your battle is less stressful? The choice is yours, but just don’t put yourself in a situation where you have several enemies kicking and punching you until your life bar is depleted. Sometimes, you may miss a punch and, the next thing you know, you are dealt a punch and then a projectile is going the other way, making it frustrating to land a blow.

Luckily, you have a simple move set that can remedy this type of scenario. Performing spin kicks and punches will help you defeat multiple enemies if you find yourself surrounded, so do use it whenever you can. The one attack that I had trouble executing at times was the dash move, which has a fairly easy button configuration. Various times when I was inputting it, the move wouldn’t register, and I then encountered a severe beatdown by enemies when I let my guard down. Other than that, you will be watching yourself doing spin punch after spin punch to weave through enemies in quick fashion. 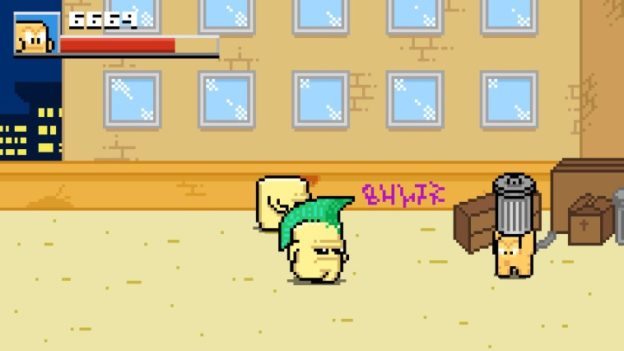 The main differences between the mobile version of Squareboy and the Switch’s version are heavily apparent. In the mobile version, the screen was compensated to allow for digitally placed controls, which to be honest can be a strain when playing games of this type that lean on button mashing. Whereas on the Switch, you are given a better view of your surroundings and the ensuing action on screen and, of course, the use of a physical controller which makes this the superior version. Plus, there’s an added arena mode and a co-op mode for the main story if you do tire of single player. Now, even as a better port from its mobile counterpart, Squareboy vs. Bullies: Arena Edition is still a short and sometimes shallow experience. Yes, when it comes to beat ‘em ups, there’s bound to be some mindless fun. But it’s over in a flash as you can complete the main game in maybe under two hours, if you aren’t on the receiving end of cheap deaths via enemy pile ups. Not only that, but aside from different enemy types and a slight change of scenery, it can boggle down to be a little samey at times. 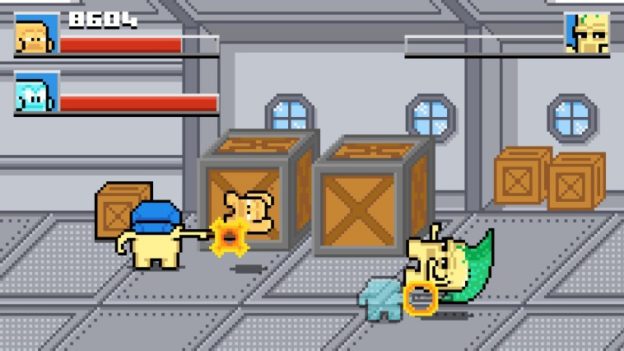 Don’t get me wrong, though, as a fan of classic arcade beat ‘em ups, Squareboy vs. Bullies certainly has its own charm that gave me flashes of mindless fun. Compared to the mobile version, the Arcade Edition is the way to go if you are itching for a quick runthrough of pixelated brawling. Yet, even with added features, it still doesn’t have more than enough to satisfy one with such an incredibly short experience. This isn’t to say that Squareboy vs. Bullies: Arena Edition is a bad game, it’s just that for all the fun you will have it simply makes you wish there was more to the entire package.

Squareboy vs. Bullies: Arena Edition for the Switch is a cute and decent callback to classic beat ’em ups that easily stands above its mobile counterparts. However, despite this console version being superior, there simply isn’t enough content or depth here to keep you interested beyond the main story.