Now that you’ve had time with Star Fox Zero, it’s time to talk about its sister game, Star Fox Guard.

What began as “Project Guard”, which was first shown off at E3 2014, has become a part of the Star Fox franchise as Star Fox Guard, which retails for $14.99.  For the price Nintendo is demanding, Guard sits comfortably as a reasonable purchase.  Many would criticize it as nothing more than a mini-game, and rightfully so.  Gameplay is limited to the player hunkering down and using cameras to destroy a handful of robots.  The story isn’t an epic, and I don’t think other developers will be citing Star Fox Guard as an example of revolutionary game design.  However, Star Fox Guard isn’t being sold as a $60 title, so I feel justified in brushing this criticism to the wayside.

Guard’s controls could not be more simple.  The camera selection is mapped to the touch screen, and either analog stick is capable of camera movement, freeing up every other button (including the D-pad) for firing the camera’s laser.  With this symmetrical control scheme, both right-handed and left-handed players are free to control the game however they feel.  The simple control scheme also ensures that players will spend as little time as possible learning how to work the game, and more time playing.  Since using the touch screen moves the camera, changes its direction, and selects other cameras, one false move can cost you that essential second needed to defend your base.  This could be considered a setback of the touchscreen, but this issue feels like something Platinum and Nintendo could have found a solution to. 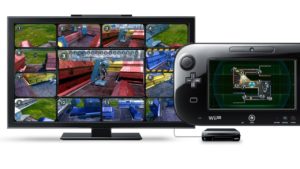 All of the game’s difficulty and complexity come from managing the cameras to prevent enemy robots from entering your base to destroy the power core.  It only takes one hit to bring down your base, leaving the margin of error to near zero.  The bases’ maze-like qualities help keep the robots at bay, but the one and done rule can be very frustrating to uncoordinated players.  Nearly all of the levels are quick, 2-3 minute affairs, so a defeat will only set you back so far.  The exception to this rule lies in the survival challenges, which pit players against three waves of enemies.  These levels are only found in the challenge missions, but that doesn’t  make the steep penalty any easier to swallow.

Players will have twelve cameras to work from, each providing a different point of view.  Whereas players could get away with only cursory glances to either the gamepad or TV screen, Guard demands players remain attentive to both.  Quick reflexes are also a must, as some enemies really haul the electronic mail once they begin to go after cameras, or make into the player’s base.  The aforementioned touch screen issue only increase the opportunity for slip-ups, putting the failure state on the controls, rather than the player.  Despite all of the challenges and chaos the game will throw out, Star Fox Guard works both as a party game, and as a single-player experience.  The pandemonium can certainly feel like too much to handle at times, but the game is by no means impossible without another set of eyes.

Robots come in many shapes and sizes, and are gradually introduced throughout the entire campaign.  Even after completing the main campaign, I noticed that my enemy index was still incomplete.  In games with very few elements and mechanics, each part of the experience becomes that much more noticeable, so it was impressive that Platinum and Nintendo were able to churn out enough varieties to keep the gameplay fresh.  The Chaos-Class robots, those designed to attack cameras, are especially creative.  Chaos robots can fly in, sneak in, teleport, and explode, and steal your cameras, so it’s rare to find an end-all solution for dealing with the entire army.  Players will need to experiment with different camera locations and combinations for each defense operation. 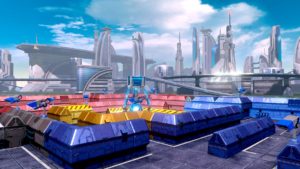 Each camera upgrade has its own strength and weakness.  For example, the lock-on can bypass a lot of enemy defenses, but is slower to execute, and the ice gun is capable of freezing any enemy, but is only able to destroy airborne robots.  Players will need to experiment with strategies to use these special cameras in combination the standard issue variety in order to find an effective strategy.  Furthermore, players will only have limited access to these cameras.  In the beginning, players can only use one special camera at a time, eventually working their way up to three.  With twelve cameras to control in total, only being able to upgrade three does not sound like a lot; that’s because it isn’t, and for good reason.  Keeping the number of cameras used down keeps players on edge, and ensures they will never have an easy time dealing with these mechanized raiders.

Though the team of Platinum and Nintendo can keep the action fresh and exciting for the first few run-throughs of a level, replay ability drops off almost immediately after.  Robots will always appear in the exact same pattern, making your plan of attack in later levels a mixture of strategy and memorization.  Since multiplayer allows players to customize their robot army any way they want, the chance of a repeat performance is drastically reduced.  Multiplayer will also be where players who want to rank up to 50 will spend much of their time.

For a $15 mini-game with only one selling point, Platinum and Nintendo went the distance to wring out as much as possible out of Star Fox Guard before putting the title to market.  The game works as both a party experience, but those who like to play along certainly won’t miss out on the full experience.  Tension remains high throughout the entire title, and the player never really gains an upper hand on the robot onslaught, which is evidence of a steady difficulty progression.  Since no single camera is all-powerful, players can rest assured (or maybe not), that Star Fox Guard has no easy solution, preventing the player from becoming bored of sitting behind a chair while moving cameras about.  If you’ve already purchased Guard as a part of the Star Fox Zero physical package, you won’t have to worry about wasting your time with this one.  If you’re a fan of strategy, or just want another party game to add to your collection, Star Fox Guard is worth a look or twelve.