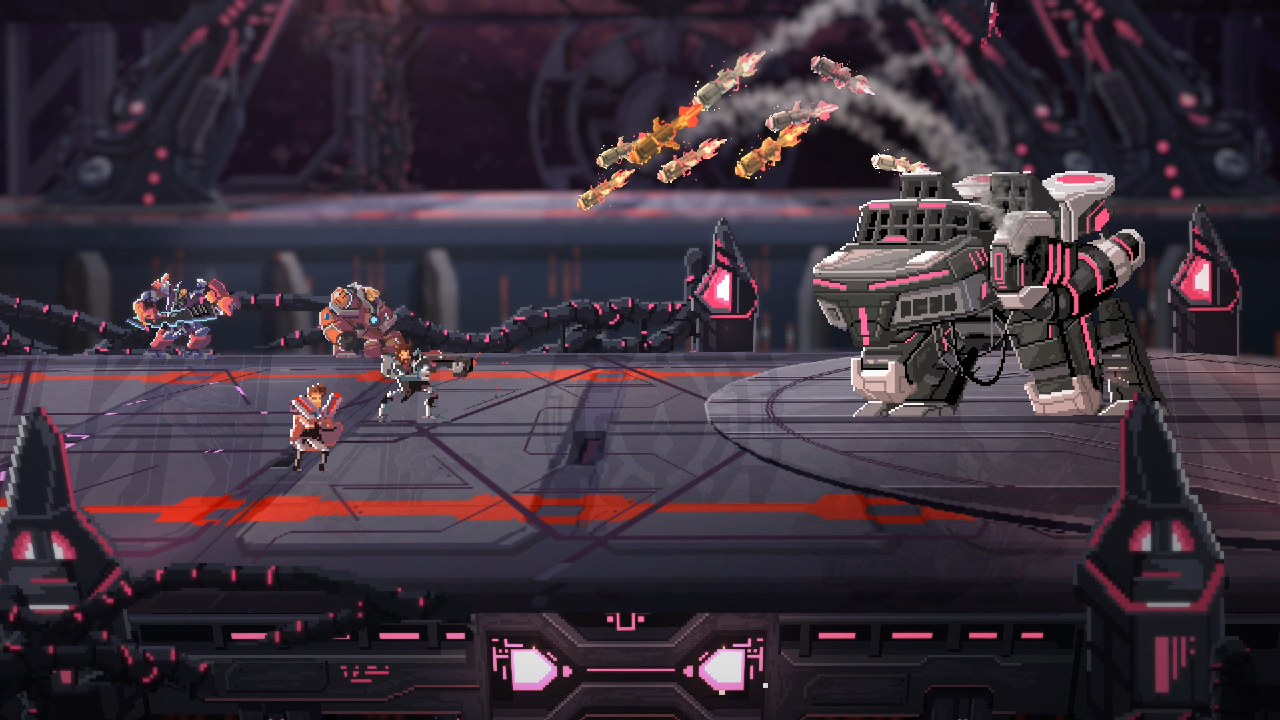 Nevermore to go astray, this'll be the end today.

In Star Renegades, your name is Wynn Syphex. You are wielding a truly massive sword. You will need it to fight your way through a lot of bad guys so you can get help to carry on the fight to save the universe from the Imperium.

But you are not alone. You get help from a couple of friends and a bot named J5T 1N. You get your bot from Profesora Zurek, and she got it from Profesora Zurek— from another universe. This is the twist in the game which keeps things moving along. You and your team can all “die” in this universe only to be sent forward to the next universe so you can continue the fight. J5T 1N will go with you (there is only one bot hopping universes), and you may meet new friends with whom you may continue to fight against the Imperium. 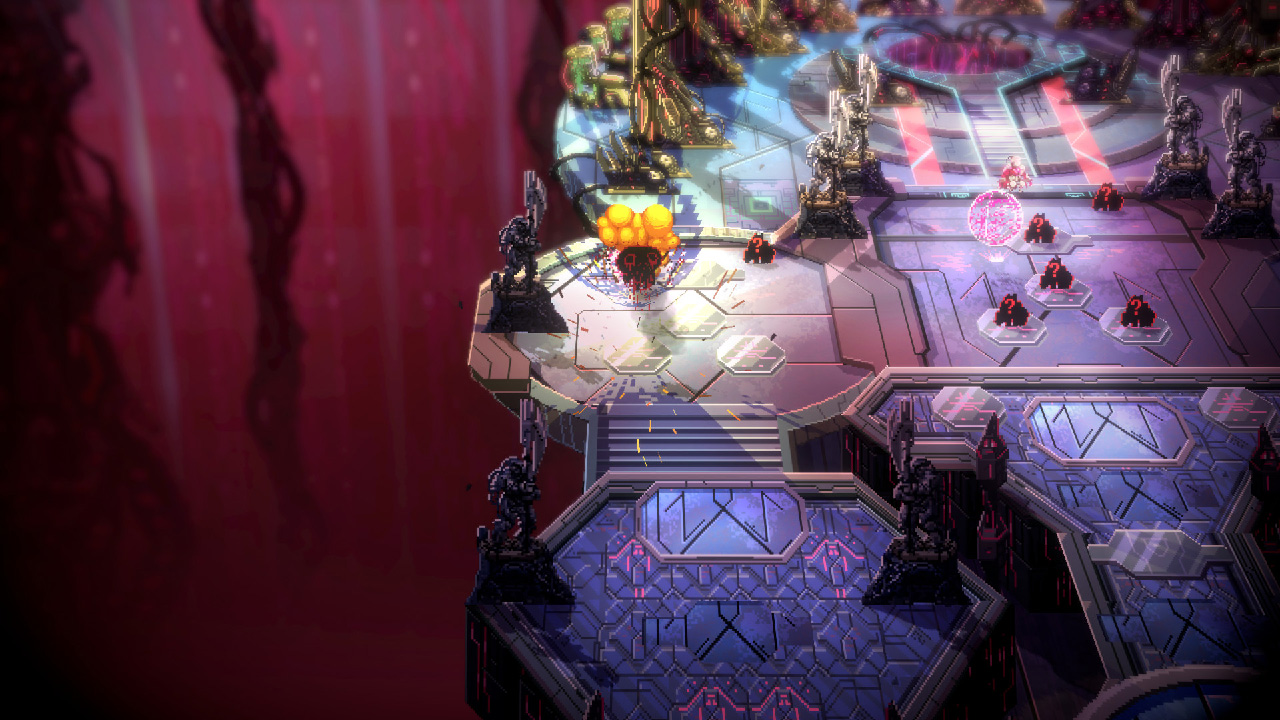 Star Renegades is a rougelite adventure with pretty good pixel art looks, a suitable synth-based soundtrack, and plenty of game elements to keep you happy. A lot of the usual facets can be found: tragic backstory, underdog hero, evil empire, an eclectic mix of aliens and bots, and turn based combat. You will be sent on several missions and will have a certain number of in-game days to reach the objective.

The limiter for this path is J5T 1N, as he gets only a small number of “breaches” per day. Each one of the breaches acts like bashing down a barrier between two sections of the map. You will need to clear a few sections to work your way around the map far enough to take out a few Adversaries and, perhaps, a Behemoth before you can reach the objective. The Adversaries are a bit like a scaled down boss; they are tougher than garden variety bad guys, and they even get discrete names, but they are not as tragic as a standard boss. For that, wait for a Behemoth. Then worry. A lot. 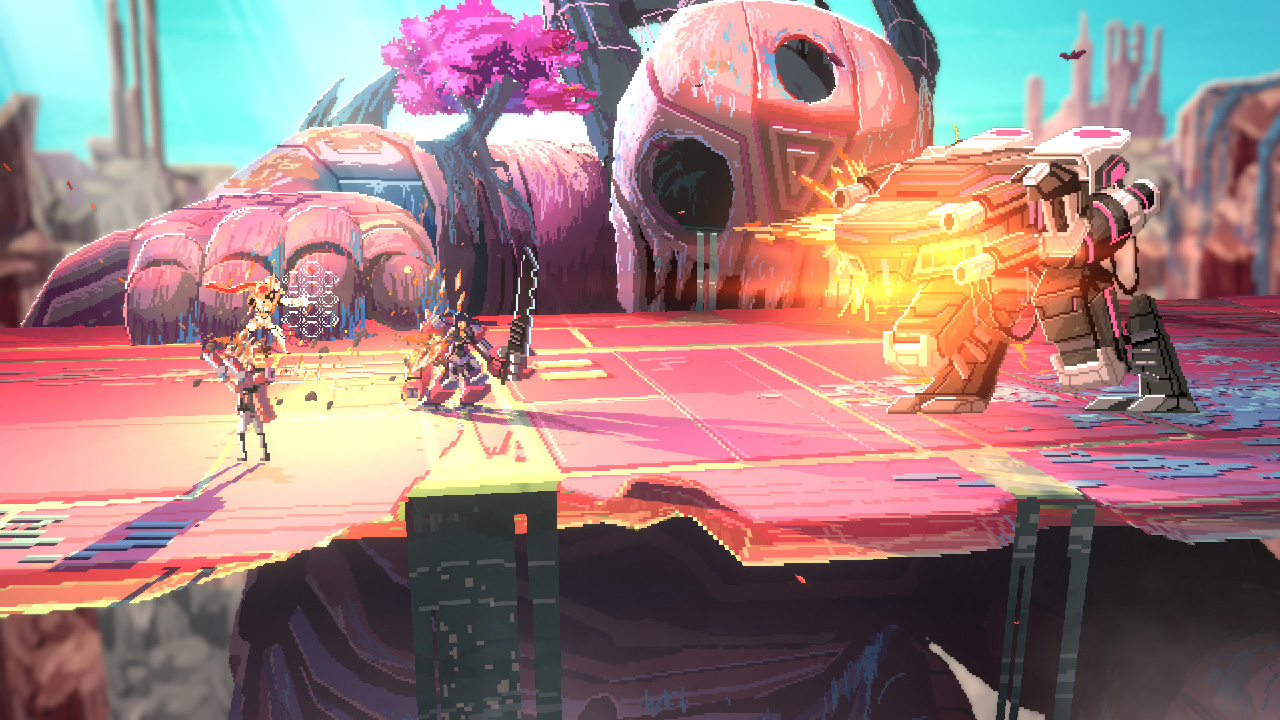 Star Renegades also has Drones in the list of bad guys. Drones come in several flavors and back up the Adversaries. While we’re on the “bad guys” topic, there is one place where you get a leg up on the baddies; you get to peek at the enemy’s vital stats to learn how effective different attacks will be, what attacks the enemy has available, and to what attacks the enemy is completely immune.

When it does come to combat, gameplays switches to a turn-based session in which each round represents 1 minute of in-game time. For each character, you can select an action from a list of attacks and defenses. There is a dashed line to indicate which bad guy you are targeting; you can use the JoyCon to select a new target. The game provides a handy visual here—there is a timeline bar at the top of the screen which shows each participant in the battle and the order in which they take their turn. This can be very helpful for planning which attack you will use. If you select an attack which deals less damage, you may get to attack first and possibly stun the enemy bad enough to push its action out of the one-minute window (basically, it loses a turn). 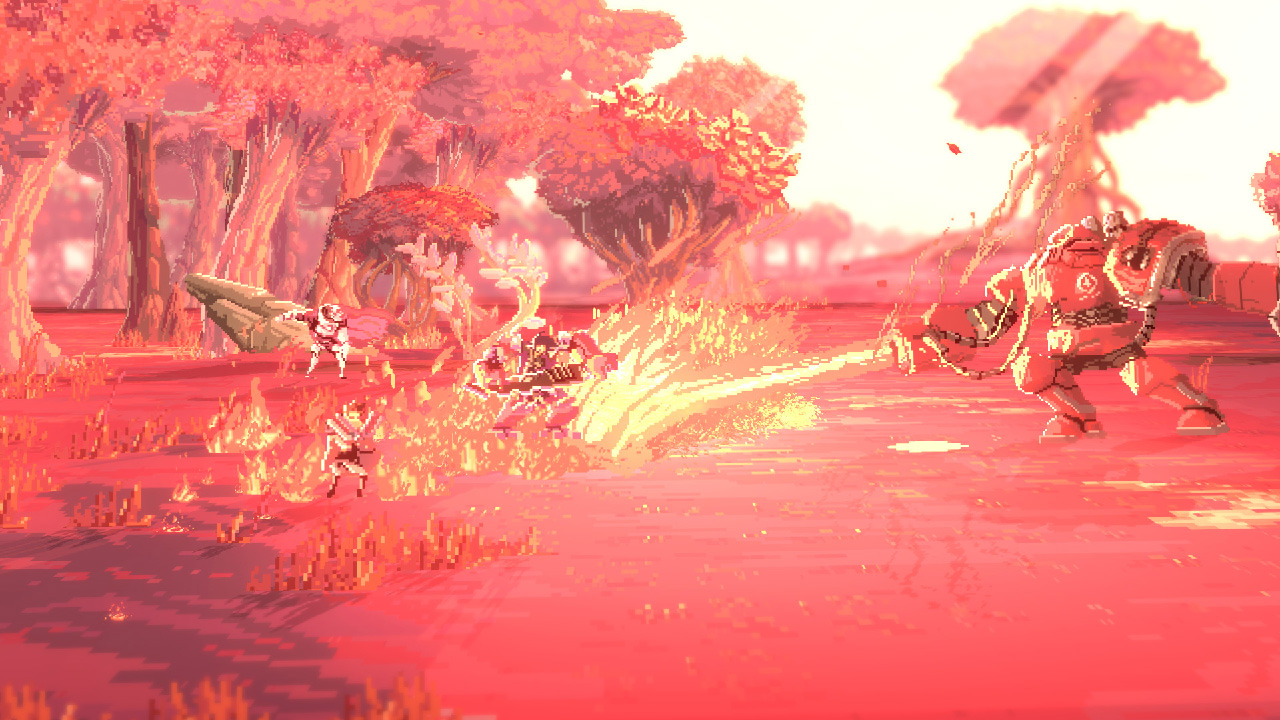 Each member of your team will have two or three options for combat actions. Not all of them are “attack,” and that’s a good thing. There are three facets of player health, and you will need to keep an eye on all three: shields, armor, health. If the enemy gets through your shields (which regenerate over time), the damage starts to get absorbed by armor. Once your armor fails, you take the damage directly to health. There are some attacks which can bypass armor and go straight to health, so be careful. One of the very handy non-attack actions you may be able to use is to add shield energy to an ally.

At the end of each game day, your team gets to “camp.” You can use this time to rest and share upgrade/buff cards. When you give a card to a teammate, that teammate gets the benefit of the card, and the two characters gain a strengthened bond which can lead to improvements in combat. This is almost a game within a game, and it lends an interesting human relations element. After each night of camp comes a new day with another three breaches so you can get back to exploring the area, interacting with people, buildings, and objects, killing bad guys, and reaching the objective. 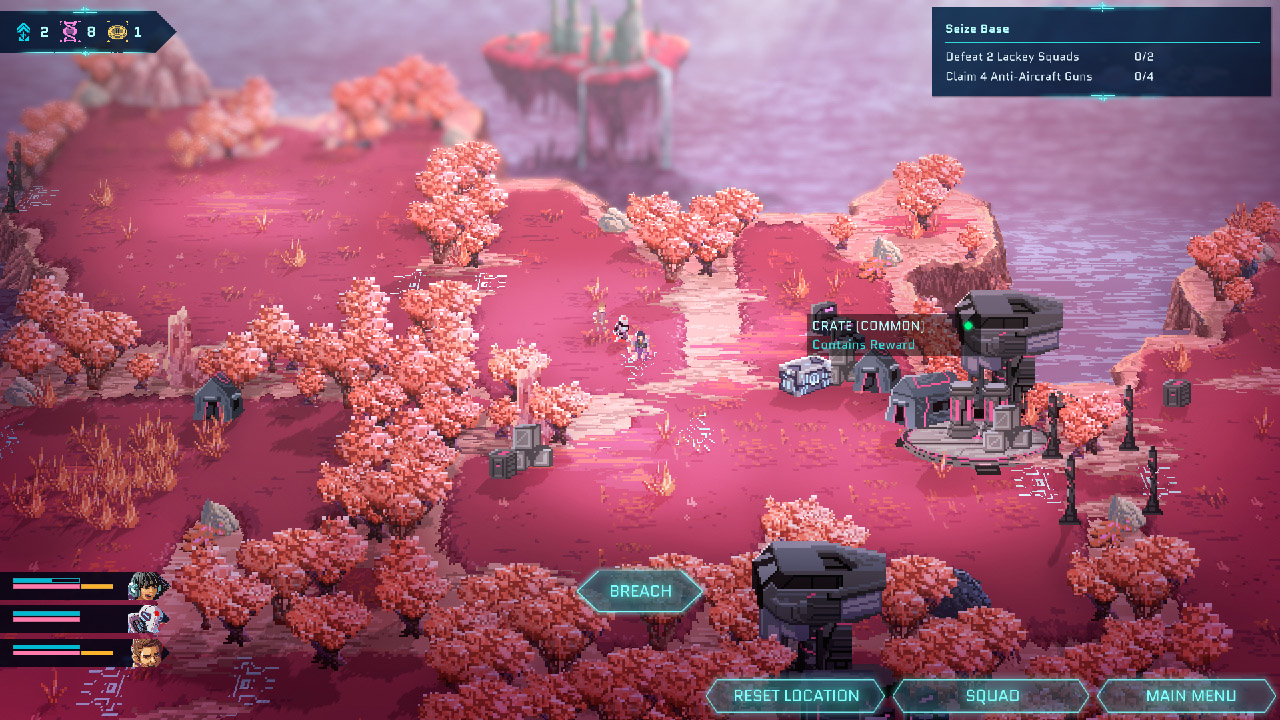 As noted, the pixel art graphics are pretty well done. I personally think the color pallet could be expanded, but the game looks good.  Due in part to the pixel art motif—and because the game is text heavy—it is better to play this one in docked mode. Playing in handheld mode for too long can be an exercise in eye strain. When you get to the turn-based combat, the avatars are larger and easier to see, plus you get the timeline bar (a bit like a floating initiative status bar).

The music is early ‘90s synth. This may seem a bit dated, but it actually fits the game rather well.

Star Renegades controls are fairly intuitive and easy to use. One area where we could use some additional “how to” information is the items menu. Using the menu and equipping gear is mostly straight forward, but given the number of types and slots, the game could use a little guidance.

An interesting combat feature is that when you beat a baddie, you gain skills, etc. This is to be expected. The twist is that when a bad guy beats you, that bad guy gets a little tougher. This means selecting your team and the actions you take and the order in which they occur is very important; every major loss means it will be a harder slog the next time.

At the time I’m writing this, the PC version has just received an update. The developers are planning console updates for 2021—new planets and new bad guys—but we will need to wait to see what other content will be made available.

Star Renegades from Massive Damage is currently $24.99 in the eShop, so it won’t do massive damage to your budget. While the game isn’t the most thrilling, superfantastic thing you have ever seen, it is still a fun game to play with plenty of story, combat, and skill required to win the day.

Star Renegades is a highly replayable puzzle/strategy RPG with a couple of interesting twists and loads of play time. Although the path through the game is linear, the rougelite features keep things from being overly repetitive. This is a good value and a solid entry for the Nintendo Switch.