The game starts off with the classic Star Wars scrolling text that explains how the galaxy is in turmoil and the galactic Empire is the new order.  Darth Vader is sent to the wookie homeworld of Kashyyyk, to hunt down one of the remaining Jedi.  The first level is mostly a tutorial mode where you play through the level as Darth Vader slowly picking up the various controls and force powers.  There is a lot of diversity with the way you can approach each enemy.  If there’s a couple enemies coming at you, just force push one off the balcony and force impale the other.  It really doesn’t matter how you fight enemies until you get later in the game when it’s imperative to master all the skills. 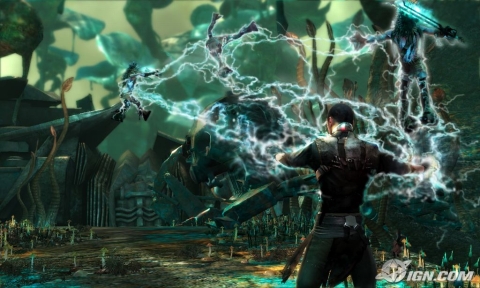 At the end of this level, your character enters as Darth Vader’s secret apprentice doing his will in destroying the remaining Jedi.  Your character crosses paths with a number of familiar faces along the way, and visits some areas from both Episode III and Episode IV.  I don’t want to spoil the rest of the story, but suffice it to say, the game has a really great storyline even though it’s a little short—I beat the game in about 6 hours without too much difficulty.

The gameplay by far is the most satisfying experience in The Force Unleashed, especially in the Wii version.  I know it’s not using the previously announced Wii Motion Plus, but the game does use the current Wii remote/nunchuk very well.  All of your lightsaber moves are controlled using the Wii remote, while most force abilities use the nunchuk (there are also around 25 other skills to master as well that utilize combinations of buttons and gestures from both the Wiimote/nunchuk).  While not 1:1, the lightsaber combat is especially fun when fighting the main bosses in the game.  Most stormtroopers go down without much of a fight, but each Jedi presents unique challenges when dueling. 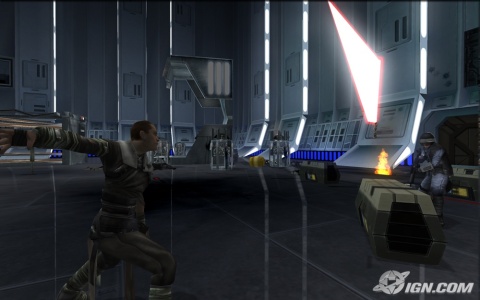 Each main boss battle in the game takes all your skills to complete.  You must use all of your lightsaber actions as well as force abilities and even environmental tactics.  You’ll find that some enemies react more to environmental attacks than they do your own.

Another great feature in the game is the ability to upgrade all of your attributes.  Everything from clothes, lightsaber color, lightsaber hilt, and even upgrading 4 levels of each force power and damage for lightsaber attacks.  The game’s storyline is fairly linear, but there are hundreds of upgrades throughout the game including bonus content like concept art and also unlocking players for the game’s 2-Player Duel Mode. 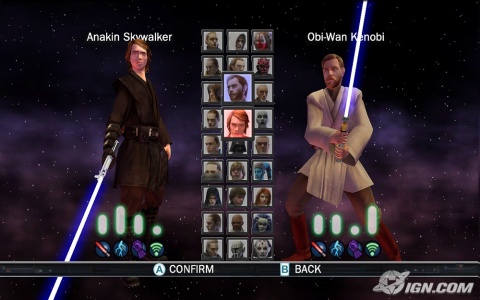 I played the multiplayer quite a bit and found it to be pretty fun.  The levels are large and almost everything is destructible.  The most fun I found was just tearing the whole level down by force pushing and throwing everything around.  All the debris on the ground then made the perfect weapons for the duel.  The multiplayer has 27 characters to unlock (9 of them are your character just with different outfits) and 9 levels to play in from places throughout the single player story.  The only real flaw in the multiplayer, is the inability to block lightning.  I found that whenever my brother used lightning, I couldn’t block it until he ran out of juice.  So we just agreed not to use it, and then it was a lot more fun : )

Visuals: The graphics are sadly lacking.  It’s hard to imagine that LucasArts couldn’t do better than this on the Wii.  The gameplay is the only thing that makes up for the lackluster visuals.

Gameplay: The Force Unleashed really capitalizes on the Wii’s controls.  Almost every force ability is well thought out and implemented using the Wiimote and nunchuk.  For example, to force push, simply thrust the nunchuk forward.  To do a ground slam, hold B and swing the Wiimote down.  For the varitety of moves in the game, they really did a great job of mapping them to the Wii remote—I couldn’t imagine what some of the moves would look like on the other versions : )

Replay Value: The game has a ton of unlockables and it would be very hard to find everything on the first time through.  That being said, the game doesn’t have any options as far as difficulty goes.  So once you’ve beaten it, that’s basically it.  The Duel Mode does add some more replayability, but even then, the experience can grow old after you’ve played all the levels and characters.

Fun Factor: The last time I had fun playing a ground-based Star Wars game was Shadow of the Empire for the Nintendo 64.  The game had incredibly hard bosses, great gameplay, and a really cool storyline to go with it.  The Force Unleashed is a ton of fun, and I was reminded of Shadow of the Empire every time I fought an AT-ST.  Even though the game has some flaws, the shear fun of swing the Wii remote around and force pushing stormtroopers into each other can’t be beat!

Wii Innovations: The Wii remote and nunchuk are used flawlessly to the point that they are able.  With the addition of the Wii Motion Plus next year, there’s no telling what fun will be had with a Star Wars game.  Think of a Duel Mode using the motion plus…yeah, i know, amazing!  All in all, the Wii’s controls were used very well, but the graphics aren’t what they should be.

Verdict: The Force Unleashed is an amazing game in its own right, and would probably get more praise if it weren’t for some shortcomings.  I had a ton of fun with the game and my verdict is a definite rent.  However, if you’re a long-time Star Wars fan, the Wii version can’t be overlooked, and is worthy of an add to your library.