The majestic narwhal, (Monodon monoceros) is a medium-sized whale that inhabits the freezing waters of Greenland, Russia, and the Canadian Arctic. It is primarily known for the characteristically long tusk males of the species possess; and while the tusk may appear to sprout from the animal’s forehead, it is actually the narwhal’s continuously growing left canine tooth that makes up what we mistakenly call the horn. You may be wondering at this point why I am telling you about Narwhals instead of reviewing a game. As it turns out, Starwhal, an Indie title developed by Breakfall Inc., is a local multiplayer game where you play as a narwhal and fight against others of your species while in outer space. So if you wanna win, you gotta think like a narwhal. The question still remains though, is the game any good? 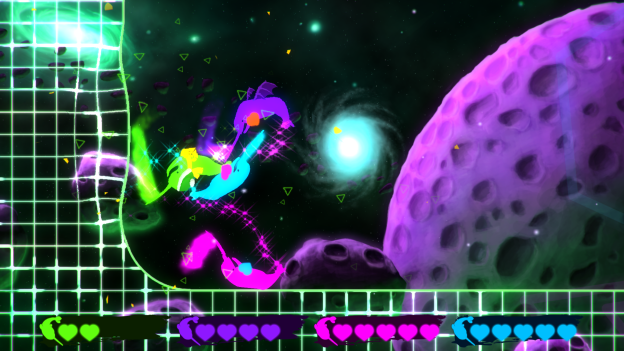 With a premise like Starwhal’s, you know things are going to be bizarre, and the game takes advantage of this to great effect. Visually, the game uses lots of neon colors to make up the arenas and obstacles you’ll face, and these serve as a nice contrast to the inky blankness of space that makes up the game’s background. Add in a rocking techno soundtrack and a handful of fun costumes to customize your narwhal with, and you’ve got yourself a good looking game full of silly undertones.

Interesting visuals are certainly a welcome guest to any title, but the meat of the game lies in the controls. Starwhal supports the gamepad, Wii remote, and Wii U pro controller, so you certainly have plenty of options to choose from. Holding down either A, B, or R (only button 2 if you’re using Wii remote) will cause your narwhal to propel forward, and using either the control stick or the D-pad turns your creature left or right. The challenge of the game comes from the over-sensitive turn inputs, as merely tapping the control stick or D-pad will send your narwhal flailing about in a comical way. There is even a taunt option, so you can rub your victory in your friend’s face. 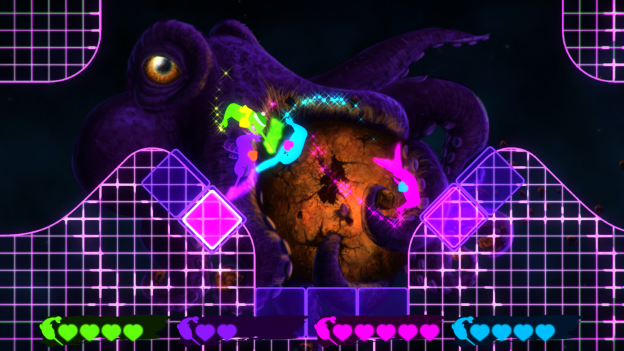 Now that you have the controls down, you’ll want to know your objective, which couldn’t be any simpler: aim your narwhal’s tusk in order to spear your opponents. The catch is, the only way to score is to hit ‘em where it hurts the most, right in the heart. It may seem a little extreme, but having such a small target to hit makes for some good, hectic fun with friends. If you’re playing solo you can always play against the computer, and they provide an ok challenge.

There are plenty of game modes to choose from, and if you’re playing with friends via local multiplayer, classic mode will likely be your most played choice. In classic mode, up to 4 players battle each other to be the last one standing. You can set the match conditions to be either timed or based on stock, similar to Super Smash Bros. It’s pretty entertaining to try and keep your narwhal under control as you attempt to tag your opponents, and things can get crazy pretty quickly. If you’re looking to see who is the best, score mode is more suited to your tastes, as you must spear your enemies to earn points, with the highest scorer winning once the round is finished. 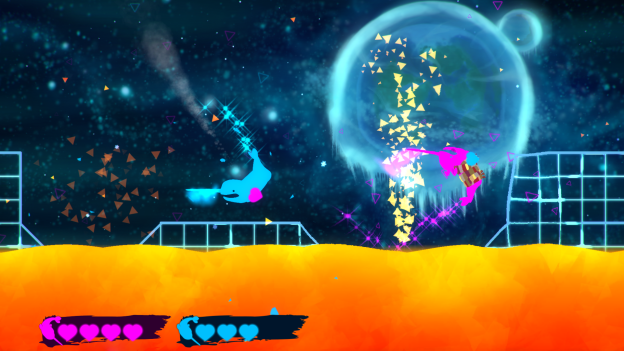 Zones mode takes a “king of the hill” approach to the game play where you must compete against the others for control over bubble-like areas. Hit the center of the zone with your tusk, and the area will change to your narwhal’s color. For each second you remain in control, you’ll earn a point with the first person to reach a set number of points determined by you being the winner. Heartthrob mode changes the formula as well by placing a single heart in the arena. The first narwhal to grab the heart must then run from the others, as the longer you are in possession of the heart, the more points you’ll receive. If you’re the one doing the chasing, spearing the heart from the enemy narwhal will transfer the heart to you. The last of all the multiplayer modes is Blastopus, and in this mode one person on the game pad attempts to drop bombs on the narwhals while the other players must dodge the attacks. If the bombs destroy all the narwhals then the player on the gamepad wins, and vice versa for the narwhal players. These game modes offer plenty of fun ways to play the game, and there is enough variety to keep you and your buddies entertained for a while.

As far as the single player experience goes, Starwhal does give you a few options besides just battling computer-controlled opponents. In challenge mode you can choose obstacles, which has you racing to the finish line as fast as you can, and target, which has you try to destroy all the targets in the arena as quickly as possible. Each stage has medals to award for fast completion times, so there is some replayability here if you’re going the solo route, and it’s nice the game included these options for when you’re alone. 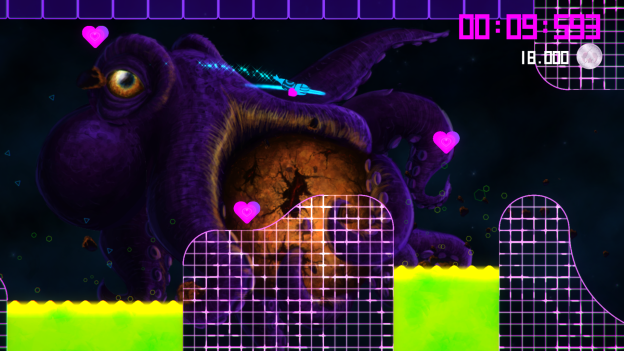 Starwhal is a well made game with a silly premise, and it has some awesome music and visuals that compliment the bizarre combat you’ll engage in. The controls are intentionally difficult to master, and this only adds to the chaotic fun when playing with friends. There are plenty of arenas to choose from, and each one has its own twist to keep things interesting. Having challenge mode is also a plus for when you can’t get any friends together. The $11.99 price tag is definitely something to consider, as the single player experience will only entertain you for so long. If you’re looking for a party game to share with your friends, however, Starwhal may be right up your alley.

The bizarre nature of this game will have you laughing as you duke it out with your friends, yet despite a few single player options, you’ll find the $11.99 price tag steep if you can’t gather up a group of friends to play with.