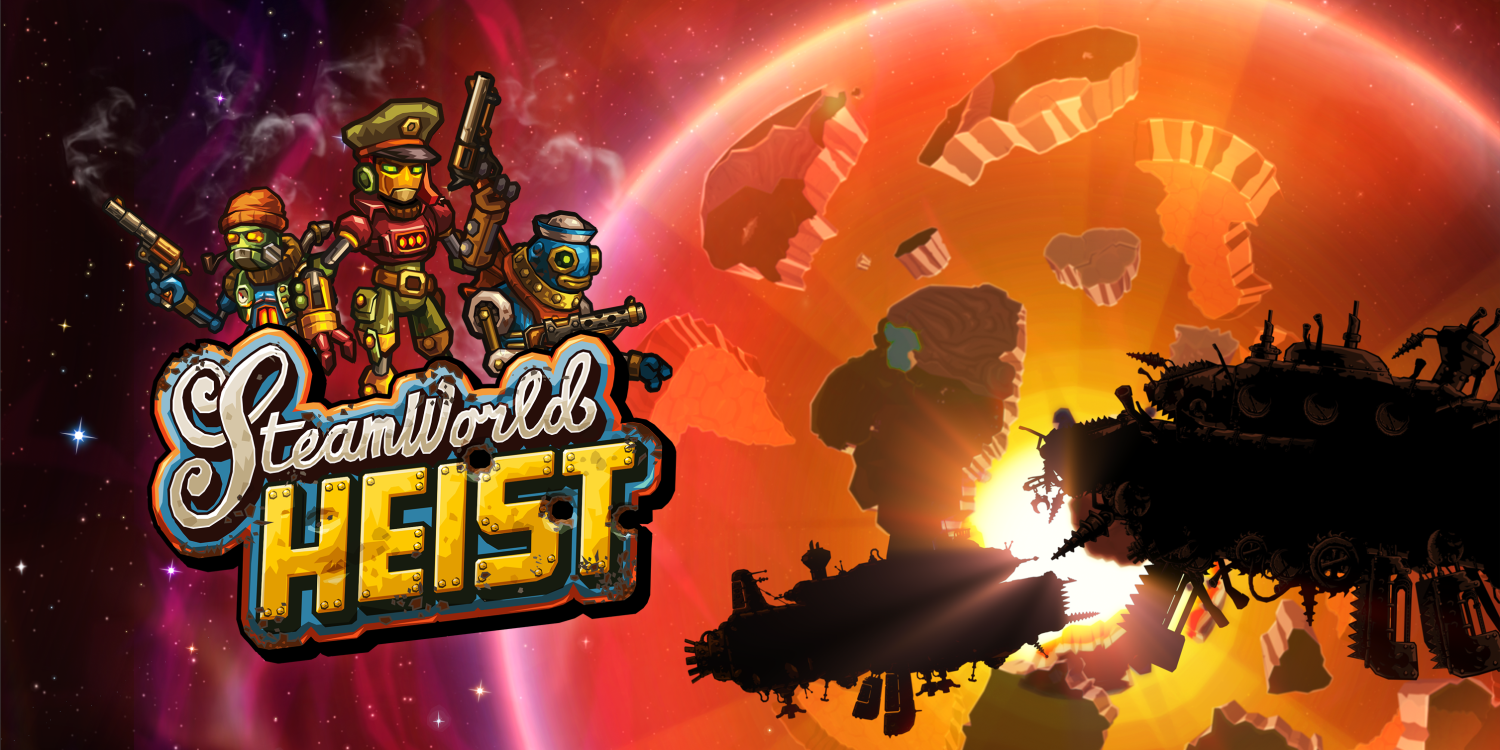 Get ready for another awesome title from the people at Image and Form Games. Steamworld Heist is the long awaited (semi) sequel to Steamworld Dig (released back in 2013). While the two are completely different in gameplay the stories do intertwine. In Steamworld Heist the world has been “blown into a million shards, forcing its steam-driven inhabitants into space”. The cowbots (from SWD) are mining what little land is left but the constant threat of Scrap metal thugs and forceful rebels stand in their way. That’s where Captain Piper comes in. She’s in charge of an intergalactic team of steambot pirates and their mission is to destroy the fiends threatening the cowbots and their precious water supply. After all, steambots can not survive without steam. 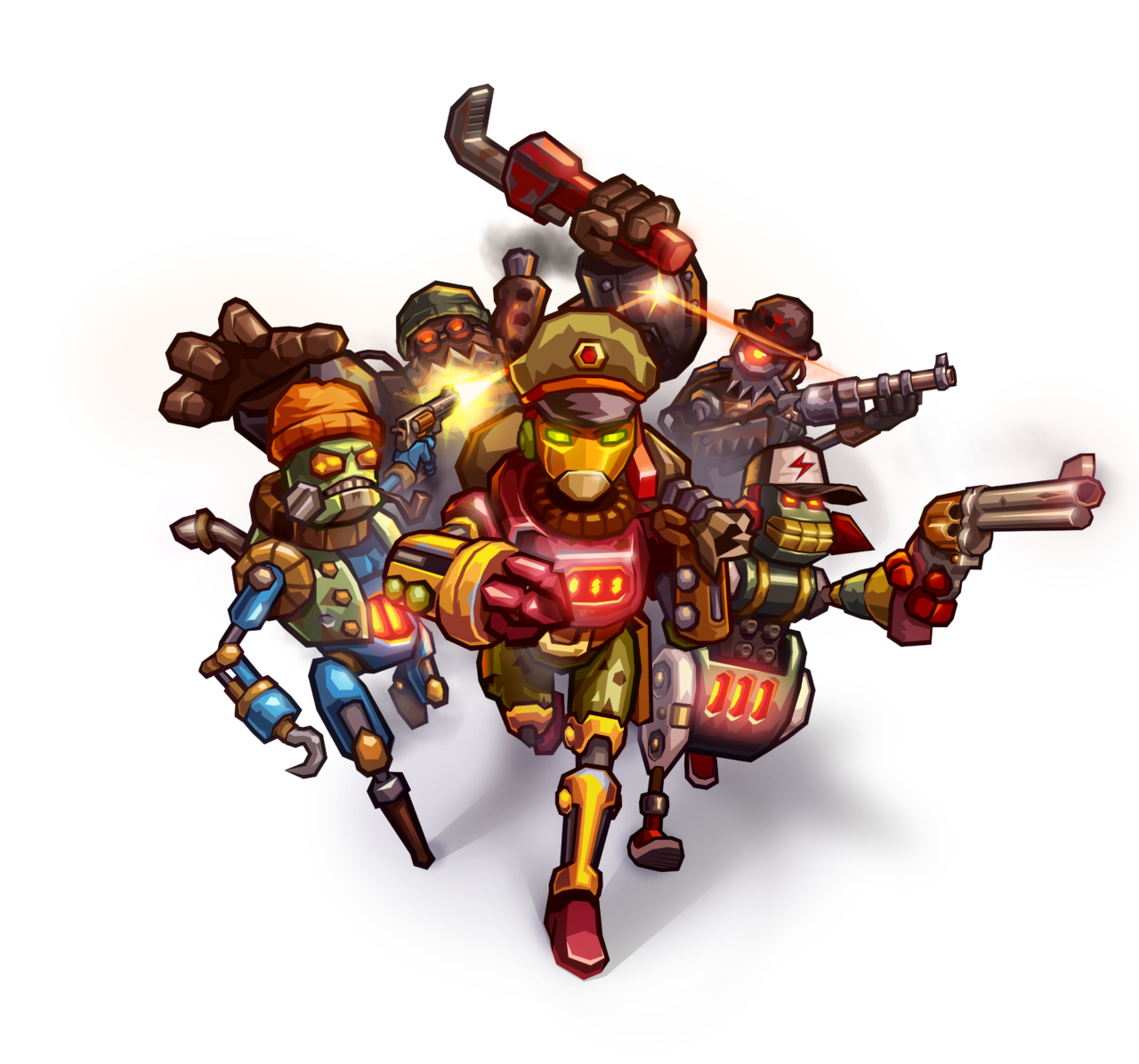 Steamworld Heist is a turn based game unlike SWD. You’re able to control up to 4 steambots at a time. You can use a turn to attack or travel a few paces through the level. Sometimes you can do both depending on how far you travel. I’m usually not a fan of turn based gameplay but I think the combat system and being able to choose your difficulty setting make it pretty enjoyable. There are also items and upgrades you can acquire throughout the game that can increase your speed and attack power. Not to mention the huge selection of cool guns that you can purchase and use at your disposal throughout the game. So far I’ve seen pistols, sniper rifles, shotguns, automatic rifles, grenade launchers, the list goes on. 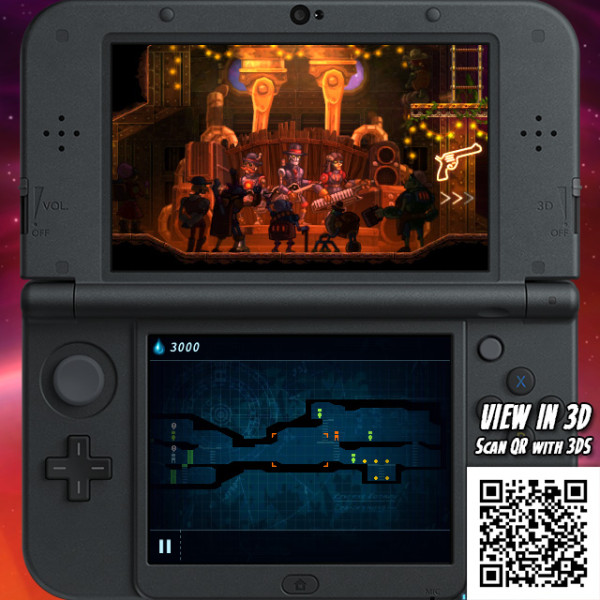 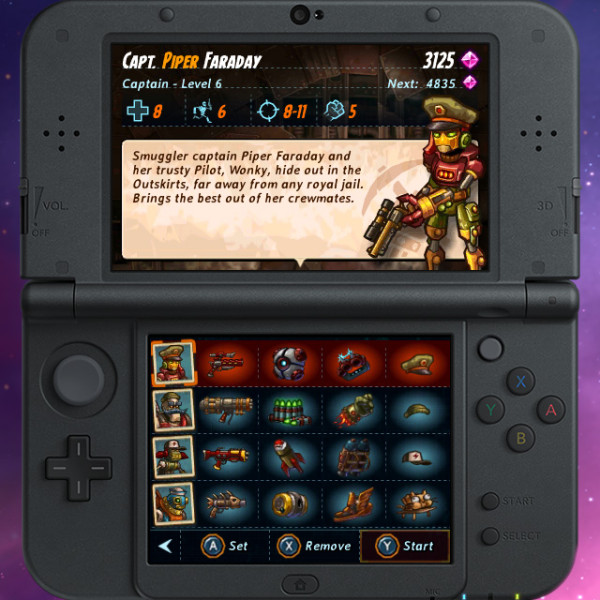 Another cool part of Steamworld Heist is the awesome trick shots you’re able to perform with your weapons. Your bullets (and bombs) can ricochet off of the walls and reach places you wouldn’t normally be able to reach. Some of the guns have a laser or some type of cursor to help you guide your shots exactly where you want them to go. Other weapons (mostly short range) do not have any help while aiming, but using the joystick or d-pad lets you position your gun and its usually pretty easy to hit what you’re trying to hit. You can also get right up on an enemy and physically attack them but you better make it count. 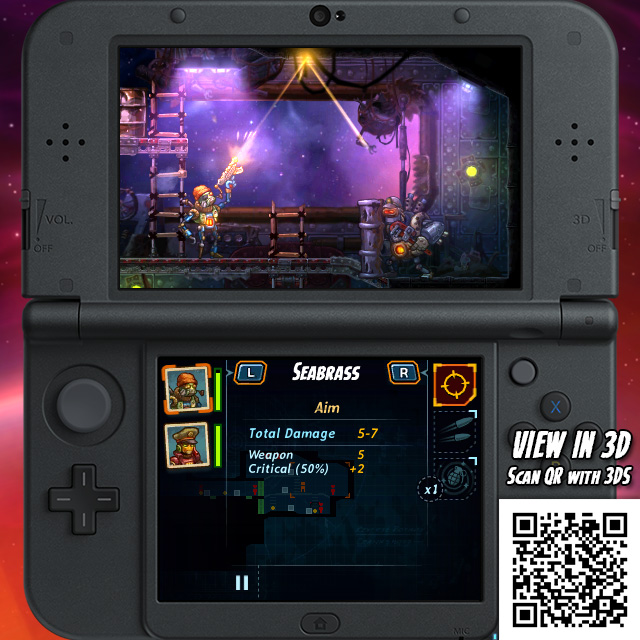 While you do want to destroy all of the enemies, sometimes taking the defensive strategy is more effective when stuck in a bind. You can hide behind barrels or metal walls, which cannot be shot through. If all of your steambots are destroyed you have to start all over and you will lose some gold. The game is set in a 2D side scrolling perspective. Which I personally enjoyed. As well as the awesome art style and graphics. Everything is very “steam punk-ish” and cartoony, but not in a childish way. It makes the game fun, along with the comedic “robot pirate” dialogue and apocalyptic “end of earth” storyline. 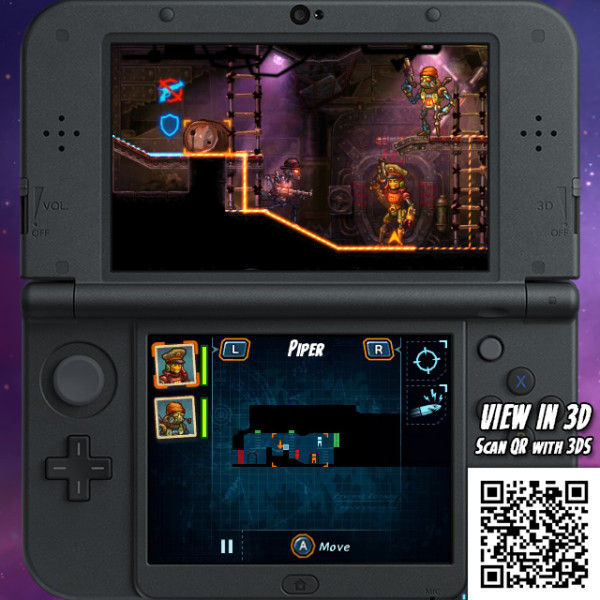 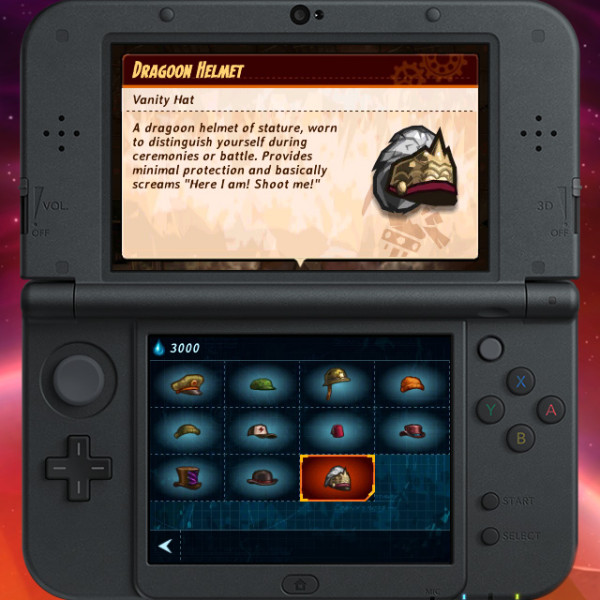 While traveling through space you can stop at taverns or shops and purchase new weapons or items that you can equip to your party members. Aside from guns there are bombs, armor, health packs and storage upgrades to increase your inventory space. You can collect gold and various other treasures on missions while also gaining experience points to level up and learn new (helpful) abilities. You’ll meet many different steambots at the various bars you can visit. Some of these new friends will accompany you on your journey (after being unlocked), thus expanding your crew. Each of them have different stats and abilities so getting your team together is also something that involves a bit of strategy. 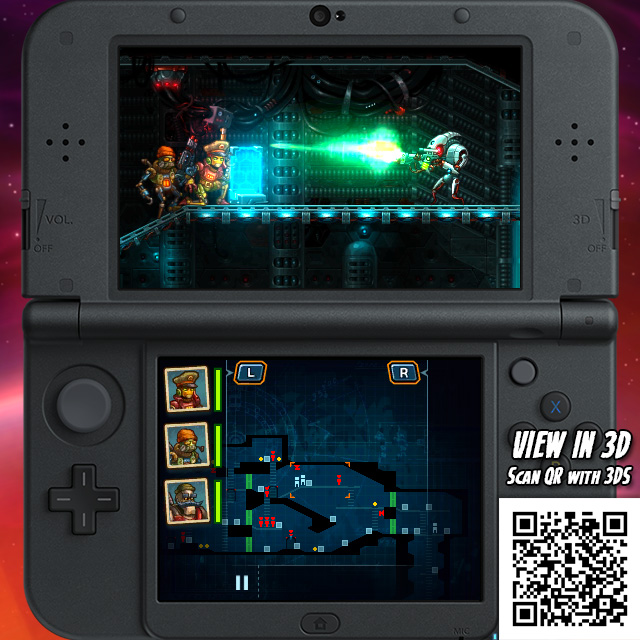 There are a ton of different map layouts to explore, when you complete your mission the exit is opened and you can finish the level. Upon completing a level you’re graded on a 3-star system. Going back and being able to replay missions to get a higher score adds to the replayability. Especially if you haven’t collected all of the loot in that area. Overall you’ll get around 15 hours of gameplay altogether depending on how you play, and if you decide to take on the various side missions located on the map. 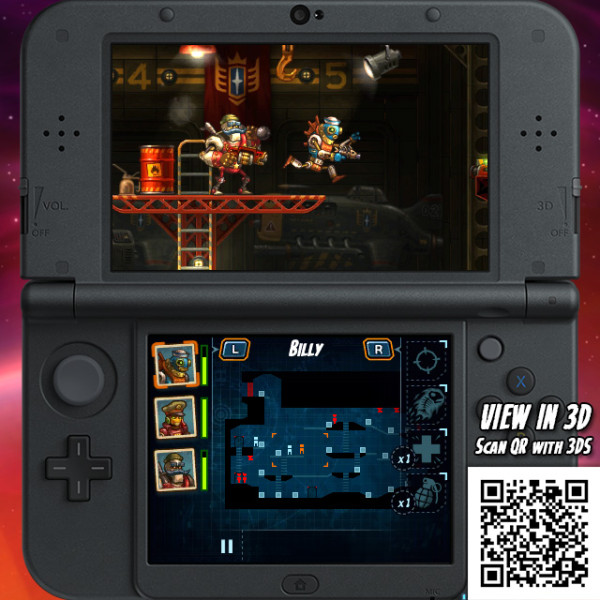 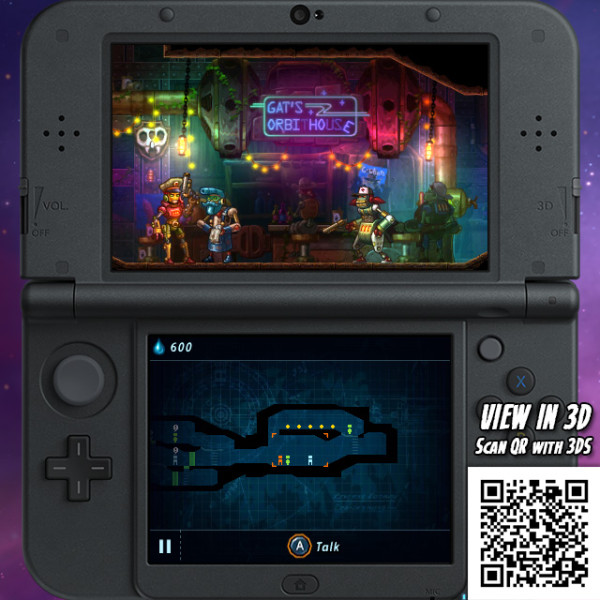 Steam World Heist is a great addition to the 3DS library. Even if you’re not a fan of turn based games (like me). SWH has a way of making it appealing, fun and very addictive. Content wise I would say the game is well worth it’s $19.99 price tag. It’s a good memorable experience that I will come back to again and again. Which is something I rarely say for this type of game. So if you’re craving a fresh new 3DS addiction be sure to add this one to your list, I highly recommend it! I honestly didn’t expect to love Steamworld Heist as much as I did. This is a game you will definitely want to add to your 3DS library. Use your skill and a huge arsenal of weapons in this futuristic, intergalactic, turn based style adventure and save what’s left of planet earth from the scrap metal thugs!