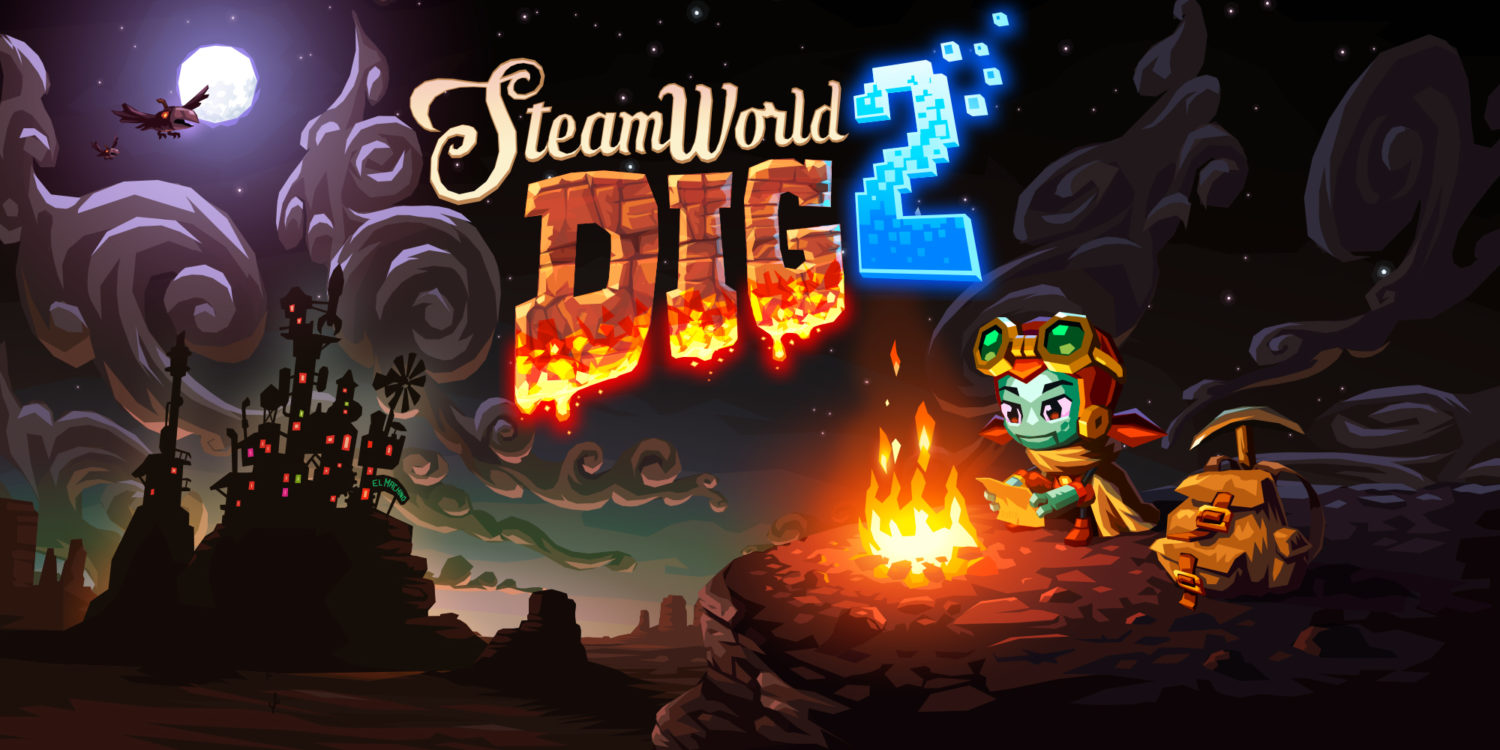 If Nintendo didn’t come out of left field with a remake of Metroid II, I would urge any Metroid fan to pick up SteamWord Dig 2 immediately. However, with Metroid II in the wild… yeah, I still absolutely recommend SteamWorld Dig 2. Dig 2 improves on the first SteamWorld Dig in every way, from animation, to gameplay, to story. Like in the first Dig, you’ll be spending a lot of your time digging through mines and collecting gemstones. Puzzle solving and slick platforming does take a bigger role with Dig 2, breaking up the monotony of slowly burrowing down the mines, which was an issue in the first game. 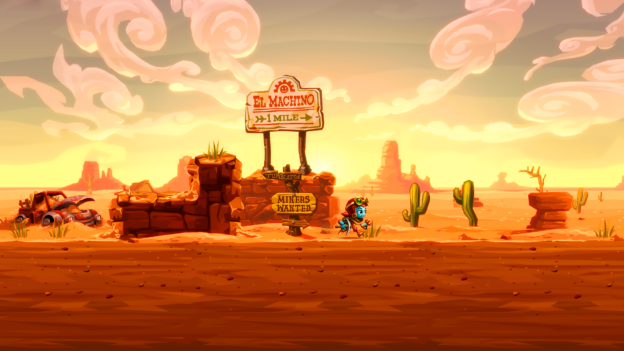 From the very beginning, the player’s quest becomes clear: track down Rusty, the protagonist of the first game. Rusty was last spotted going down the mines at El Machino, and so Dorothy takes it upon herself to dig down and go after him. She also comes across Fen, a sprite from the area Vector from the first game, and he decides to tag along on her adventure. Fen acts as a companion to Dorothy, but his duty is mostly as someone for Dorothy to talk to. He contributes a little more to the plot in the second half of the game, but I would have liked to have seen more done with Fen. 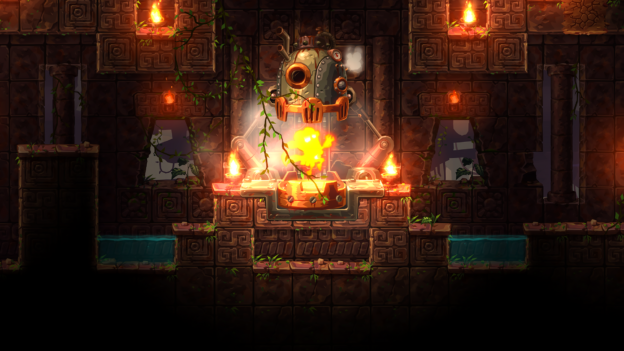 The areas Dorothy explores vary both visually and gameplay wise, ranging from lava-filled temples, to underwater caves. Yet all of the levels still keep that mine aesthetic, and you will find yourself traveling down a great distance. Between hidden caves and the chance to come across more gemstones, I was always itching to make my way further down. The worst feeling came when I completely filled my bag with gemstones and had to return to the surface. Of course, this was followed by one of the greatest feelings, watching my wallet fill up with all of the gold I received from a hard day’s mining. The atmosphere of Vectron was especially unnerving, but it’s a shame we see so little of it. 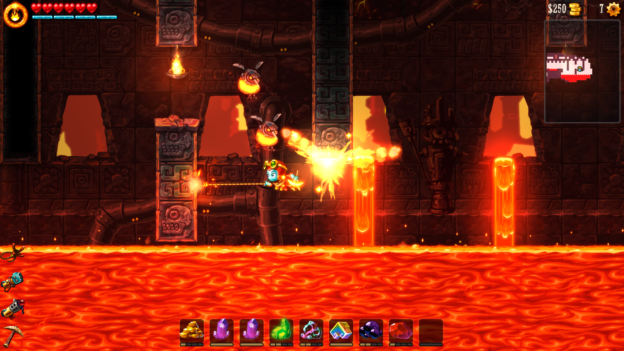 Enemy variety is lacking a bit with SWD 2. Including bosses, the number of enemies barely reaches into the double digits. On the other hand, each of the enemies encourages Dorothy to use all of the tools at her disposal, keeping them relevant as you work your way deeper into the mines and caves below El Machino; not that level design does this enough already.  Even after receiving the jetpack, a late game item, the hookshot was always at the ready to move Dorothy out of a perilous situation. Most of the tools were spaced out evenly, but near the end of the game, Dig 2 sort of threw the rest of the upgrades at me in quick succession. 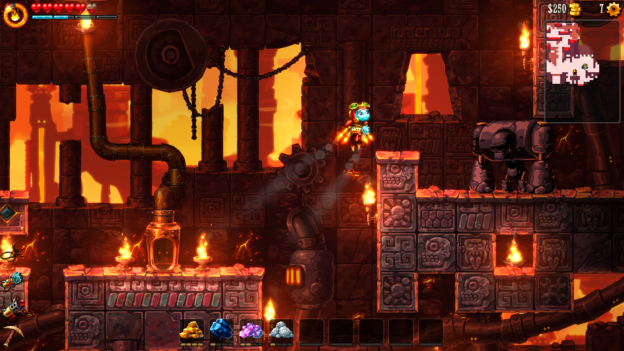 In El Machino, you can stop at a workbench to improve your gear. Aside from increasing her tools’ basic ability, Dorothy can also exchange upgrade cogs which giver her passive abilities, such as an increased chance for blocks to drop two gemstones. What makes the system so interesting, is that the player can toggle these upgrades on or off anytime, so long as they are at the workbench and have enough cogs. Even if they possess only a few, players won’t feel backed into a corner wondering if they’ve used their cogs wisely. 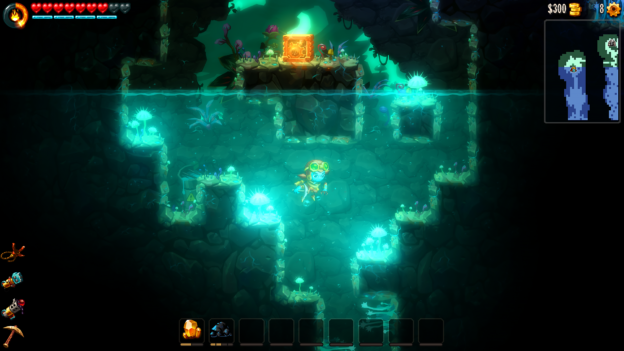 Where Dig 2 really shines are the environmental puzzles found in the caves. Some will challenge not only your brain, but your mastery of Dorothy’s basic skill set. Most of the caves also encourage you to return once you’ve upgraded Dorothy, and rooms that have been completely cleared out will have a check mark on them. These are absolutely a huge time saver for those digging for 100% completion.

Four years have passed between the first and second SteamWorld Dig, and I can tell the studio has learned a lot of lessons in that time. If the group had simply stuck with the formula from the first game, they would have seen some success, but not a game to this level. Likewise, if SWD2 had stuck more closely with the standard Metroid formula, it may have been written off as just another homage to the beloved Nintendo franchise. However, SteamWorld Dig 2 goes above and beyond expectations to deliver a unique experience that fans of the genre will appreciate. Platforming fans especially will want to add SteamWorld Dig 2 to their collection.