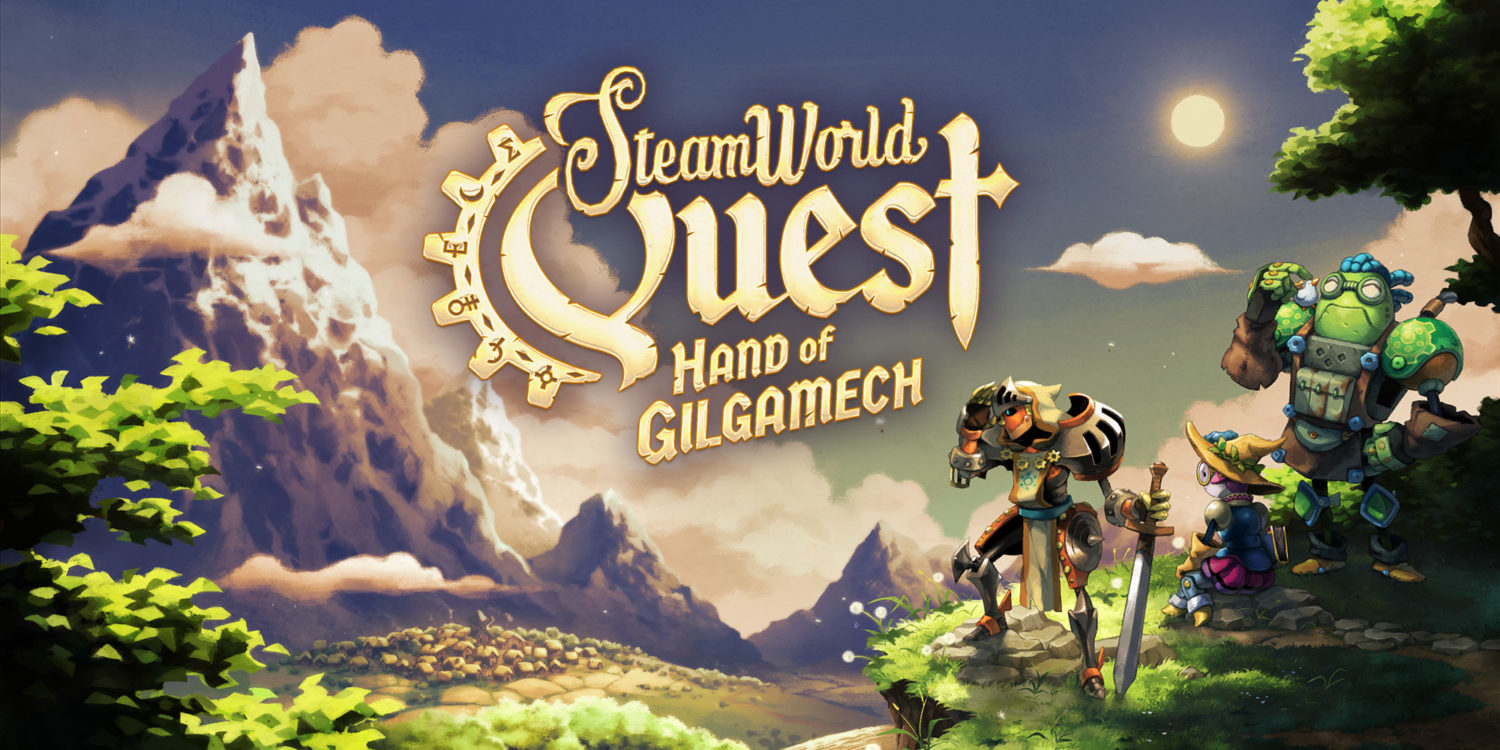 Developer Image & Form is certainly no stranger when it comes to experimenting with different genres. Since 2010, the Swedish indie dev has dipped their toes in the likes of tower defense, two Metroidvania style action platformers, and a turn-based strategy game. In addition, each of these projects have all been based in the SteamWorld series which feature a colorful cast of steam-driven robots set against a post-apocalyptic landscape. Now, Image & Form has taken their quirky and fun steampunk aesthetic to the fantasy realm with SteamWorld Quest: Hand of Gilgamech. But this time the genre in which Image & Form has taken up to task with this setting is that of a roleplaying card game. Much to no one’s surprise, the combination oozes with both charm and an engaging combat mechanic that’s welcoming to newcomers and at times challenging for veterans. 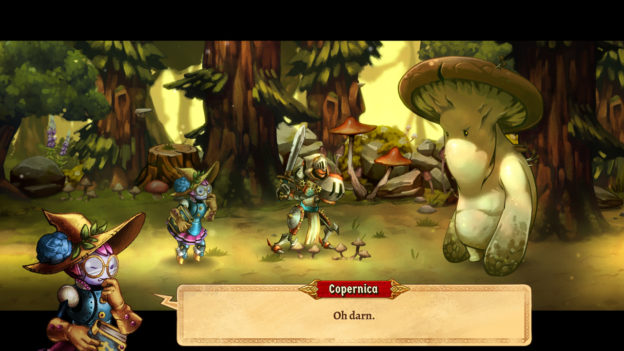 Told from the perspective of SteamWorld Heist character Seabrass as a bedtime story to an unnamed steambot child, SteamWorld Quest takes place sometime long before the events seen in Dig. In this world filled with various steambots and their medieval counterparts, you are soon introduced to our first few heroes, Armilly and Copernica. Armilly is a sword-wielding future guild hero who specializes in fire attacks and Copernica is an alchemist who uses a tome book and possesses fire, frost, and storm attacks. Along the way, you are then accompanied by three other members who will max out your party. There’s Galleo, a hermit who heals but feels more like a tank at heart; Orik, a katana-wielding individual who has the ability to change his masks to alter stats; and the duo of Tarah & Thayne, who are a pair of bandits with axes that use dark arcane magic. Throughout your adventure, I found myself chuckling from time to time over their banter in many scenes in between battles, which has become yet another solid trait from Image & Form’s games. The same praise can also be said for both the game’s colorful art design that at times feels like a pop-up storybook and the sweeping music which solidifies the tone and fantasy setting. 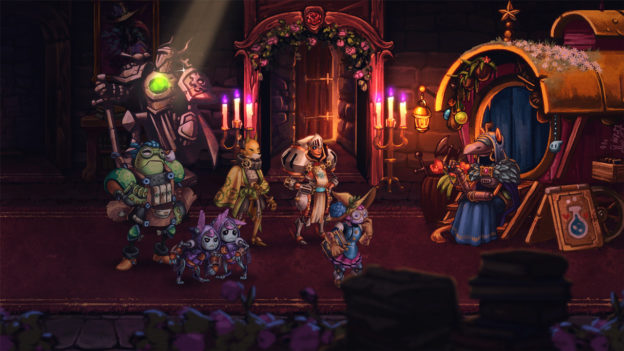 For starters, the main hook of the card roleplaying aspects to SteamWorld Quest are easy to understand; however, it is a matter of how one wisely uses their carefully crafted deck of cards before they go into battle where things get truly dicey. You are given the choice of picking three out of five of your heroes to use in every card duel with eight cards to each character. Battles are not randomized, so you have the option whether to engage enemies for further grinding or avoid if you see fit.

As you engage in battle, your deck is promptly shuffled and you are allowed to choose up to three cards each turn. Some action cards with basic attacks or effects can be played freely whereas your more powerful ones cost a certain amount; so, playing your cost-effective cards first can usually lead to having a turn full of using high-damage attacks. The cards in your deck are also color-coordinated to match their character, which can play into pulling off various combos and tag team attacks. Overall, it’s not a completely complicated set-up for one to understand as the rules laid out clearly. It’s surprisingly semi-deep experience that will have you wanting to craft the best strategy possible. Plus, it’s an absolute joy when one’s carefully crafted deck of cards is able to dismantle a group of enemies and reap the benefits of every battle. 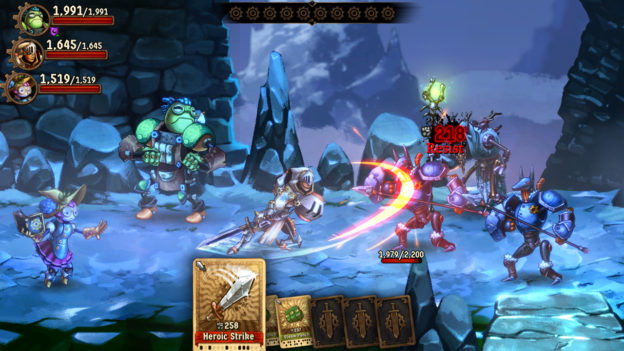 When it comes to SteamWorld Quest’s eclectic cast of characters, each come with varying degrees of offensive and defensive abilities, so choosing whether you want to prioritize in battle is always key. Sometimes, you’ll be pondering if you should favor more physical attacks or spend time refining characters with more long-ranged options along with various debuffs? All of these scenarios played throughout my head as I began to choose the most fitting party members (and their weapons and many accessories with accompanying upgrades) while also constructing their respective eight-card decks. It wasn’t until halfway through the game that I found myself needing to put more effort into creating a fine-tuned deck that would neutralize a boss and focus on their weaknesses.

About 100 cards exist throughout the game for you to collect and/or craft, and choosing which ones to use in your battle deck simply boils down to simple strategy. There are major battles which need you to go either on the offensive or defensive first, so finding the right cards requires a little thinking as you acquire more in your total arsenal. Even with new cards in your deck, there’s just something satisfying about drawing that perfect card that you needed at the right time in battle. In the end, each battle never felt the same. The boss fights themselves were at times multi-layered enough that I was wanting to replay them to see if different strategies of mine fared better or worse. 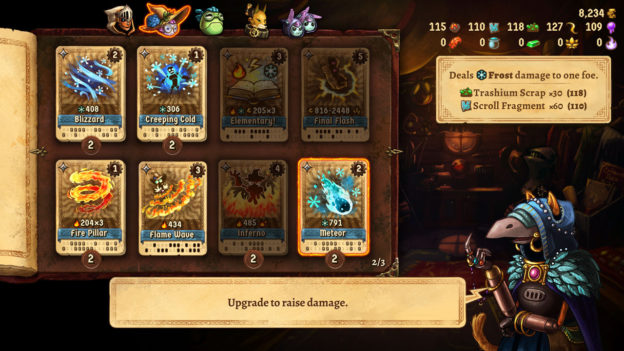 The main quest itself is divided into 19 chapters over four acts with the majority of the levels set up in a simple and linear fashion. A massive and sprawling RPG epic this is not, but don’t let that deter you from what amounts to be a fun and enjoyable experience with varying degrees of card playstyles. But, when it does come to the linearity of the levels, there’s not much to do other grind and find treasure chests for different loot such as cards, weapons, and potions. The map alone can be less than helpful with overlapping rectangular sections. Thankfully, it’s not too much of a worry as each chapter can be easily finished within a short timeframe of 30 minutes or less, even with boss battles taking up a chunk of it. Although, even when you finish the adventure, there’s sadly little incentive for replayability beside from completing it on a high difficulty setting or finding all the loot and treasure chests in every chapter. That aside, the journey and story itself are full of twists and turns that I found myself more invested than I could have imagined. 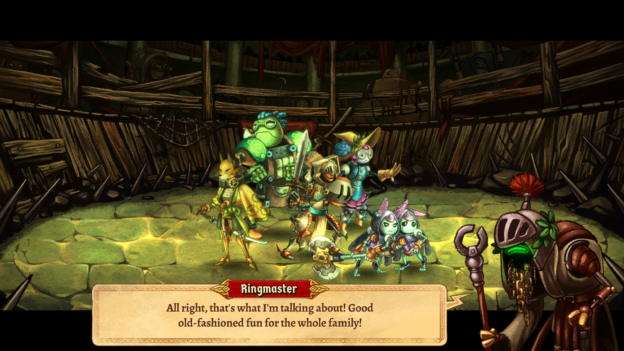 SteamWorld Quest is a delightful and super engaging adventure that is sure to impress both regulars and newcomers of Image & Form’s steambot saga. The indie developer’s experimentation with different genres over their various games in the same world is a testament to their ability to surprise you at every corner. SteamWorld Quest is just another example of that experimentation with its novice and at times challenging roleplaying card system and deck building options. In more ways than none, you can count on being dealt a good hand with Image & Form’s latest offering.

While not a fully deep experience for those familiar to the genre, Image & Form’s first attempt at a card-based RPG still pays off in spades with a satisfying gameplay hook and journey that oozes with colorful charm.