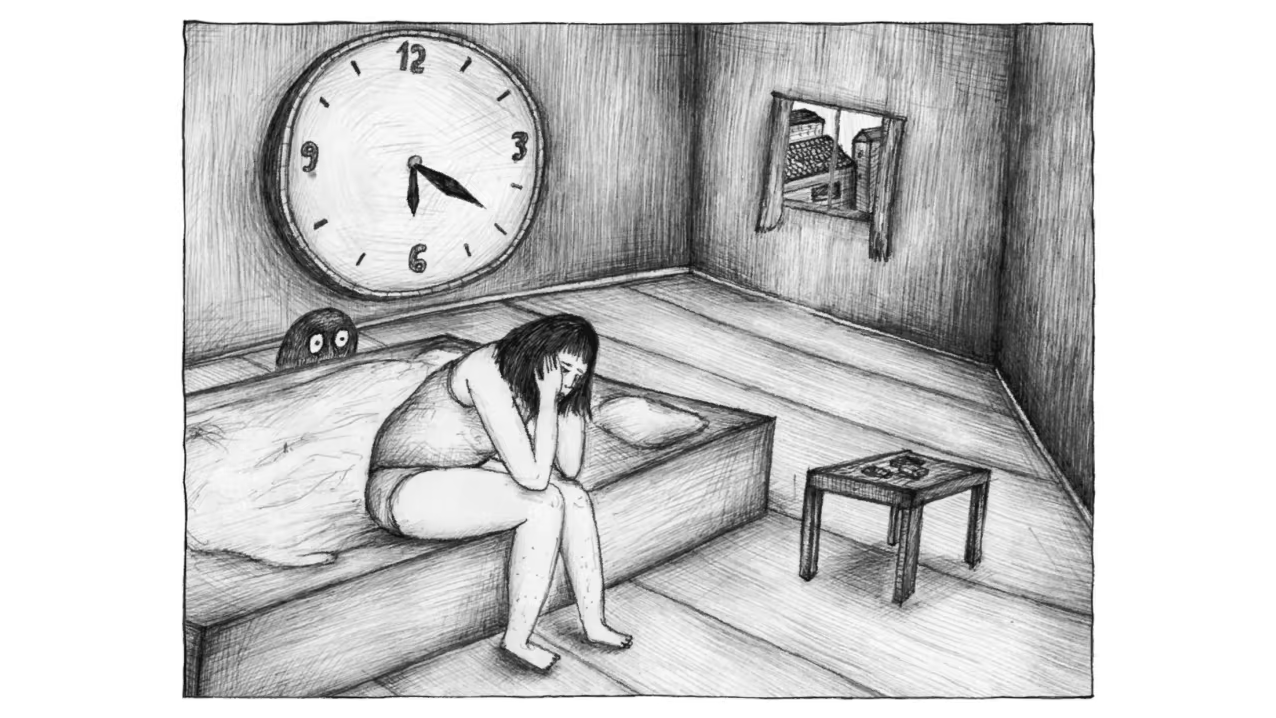 The opening “Copenhagen. You bitch.” sets the tone for Stilstand perfectly. It is an interactive graphic novel that takes you through one long, sad summer.

Stilstand has a distinct art style that looks like it could have been hand-drawn on notepaper with a scratchy biro. The way people are designed reflects the way beauty seeps out of the world when your mood is so low, particularly in scenes when the protagonist is looking at her own reflection. It’s not scary or creepy, but muted. The art style feeds the mood of the entire game, leaking the sense of depression into every line.

The game is predominantly black and white, with touches of blue to indicate where you can interact. This colour choice is so effective. It’s eye-catching enough to direct you without giving instructions but doesn’t disrupt the mood.

Every element of Stilstand is incredibly detailed. The lovingly sketched panels of Copenhagen are breathtaking, showcasing the majesty of the city but also the overwhelming heartbreak of seeing it from such a bleak perspective. 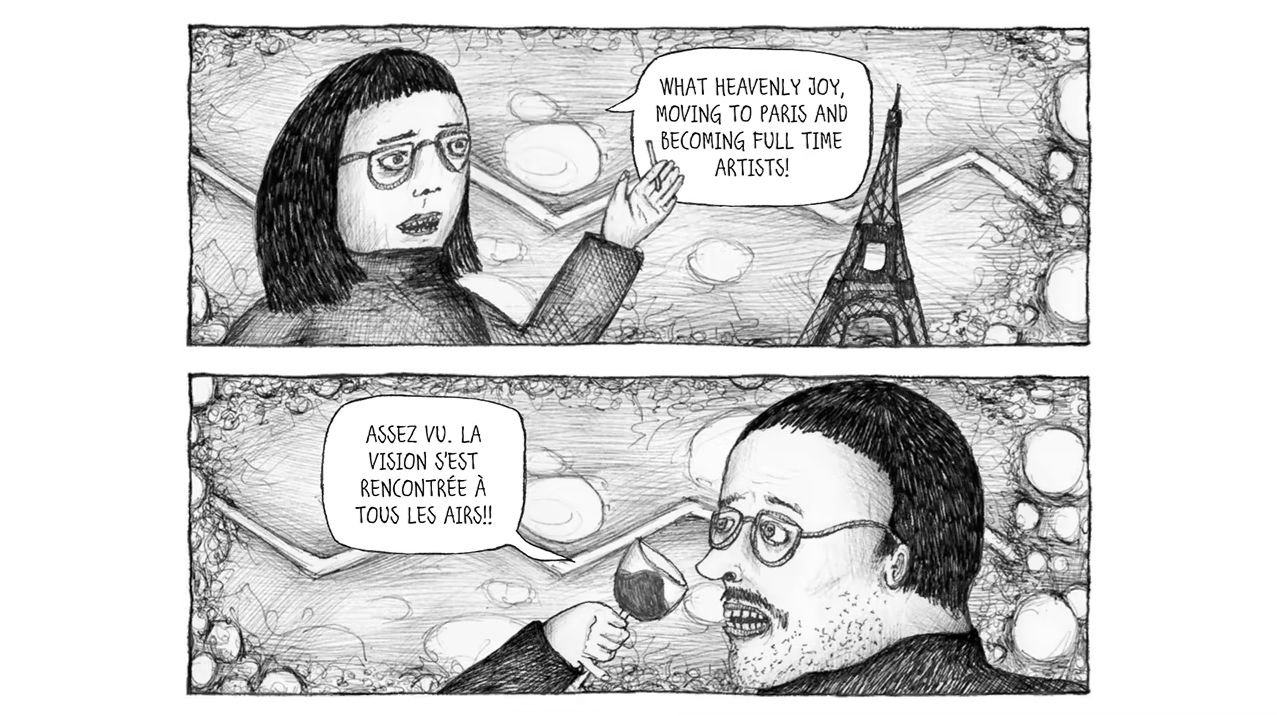 The game as whole is short, but the narrative is slow-paced and purposeful. The story lasts an entire summer and features just one consistent main protagonist, followed around by a shadowy figure identified only as “the thing that lives in my apartment.” At first, I thought it was going to be a sleep paralysis demon hovering in the corner of the room. But he’s there the whole time for the protagonist to bounce her thoughts around with. He is at times a voice of reason, other times her conscience.

While the majority of the story is told visually, the dialogue between the protagonist and her mysterious other drills down into her emotional state. She’s often not honest with him, in the same way you lie to yourself when you’re trying to avoid acknowledging unpleasant truths. That dishonesty is presented in a very relatable way and makes that dialogue all the more powerful. Plus it adds some dark humour in the form of sass and sarcasm to the game. 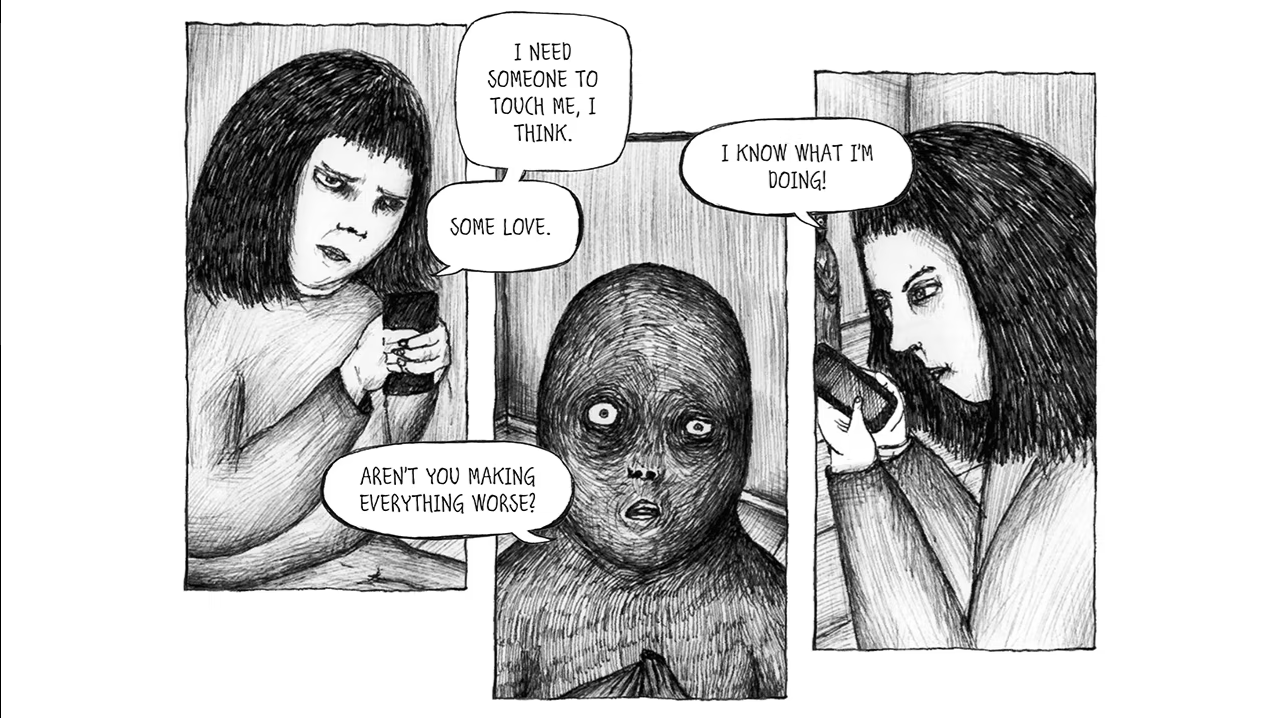 The gameplay is simple. You click to turn the page or trigger an animation that reveals the next panel. There are also panels you engage with, and even these tasks are uncomplicated. You open your bedroom curtains. You scroll through your phone. You raise a cigarette to your lips. Making you engage with these tasks that most people do automatically hammers home how much of an effort it takes to do them when you’re swallowed up by depression. The very ordinariness of so much of it is what makes Stilstand so profound.

Sometimes, you have to wait a moment, in the stillness and the quietness, before you can click to the next panel. It lets the feeling linger with you, so you’re forced to confront and understand it. The weight of dissatisfaction speaks to a desperately common aspect of isolated contemporary life.

Over the course of the summer, you find some motivation to engage with the world. You go to parties. You connect with someone on a dating app. Ultimately, until you’re willing to confront your problems head-on, forcing yourself to do things won’t help. 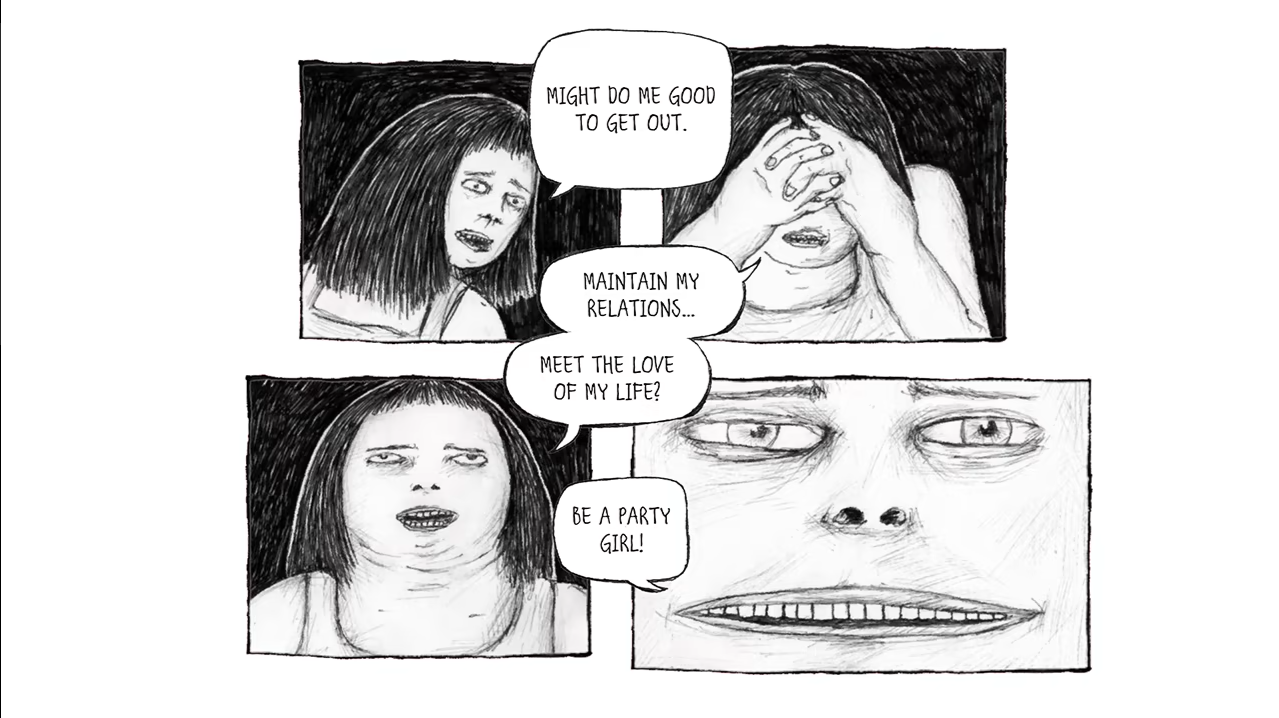 Stilstand culminates with your character drifting through her own memories, reflecting on everything that has happened. It doesn’t have an answer to her problems. It can’t. If it did, it would feel hollow, as if everyone who has ever struggled with their mental health could have resolved their issues if they’d just come to the same conclusion.

Instead, the protagonist learns, with patience, to cope and to approach the next part of her life more confidently. There’s no guarantee she won’t feel it again, but now she’s made it through once, she’s better prepared. And that’s enough. It’s a perfectly self-contained story that ends with something like hope.

Stilstand is not a graphic novel that everyone is going to connect with. It is short and simple, but it does its job perfectly.

Stilstand is an interactive graphic novel that accurately captures the minutiae of despair and loneliness through a darkly funny and absurdist story.