Streets of Rage was a popular series, starting on the Genesis in the 90s brawler heyday. Fast forward to 2020, and SEGA fans finally get Streets of Rage 4!

It’s the latest installment in the epic series, but it’s good to see that little has changed as far as genre story goes. Somebody somewhere needs an epic beat down, including all their friends and coworkers. Twenty years have passed for our heroes. I guess they spent all that time in the gym doing P90X because Axel, the main character, went from cut and chiseled to bearded out super freak that can (from the looks of it) crush your skull to dust just by looking at you. 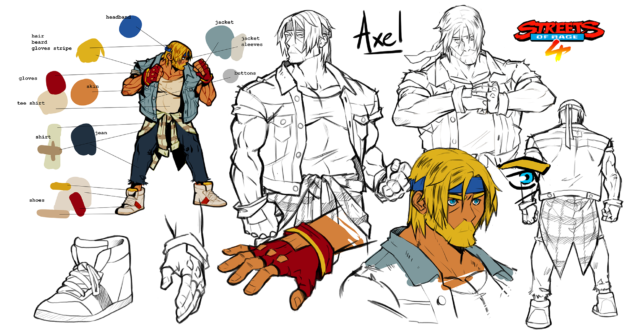 You get some of the previous characters and some new ones to mix it up. Also, some of the old moves along with some superpowered special moves; anybody that has flames coming from his hands when he hits you…means business! Each character has their strengths and weaknesses. Now they added a sweet juggle mechanic that lets you lay the smackdown on the bad guys. However, your enemies can return the favor tenfold, so don’t stand still and expect mercy as they will show none.

With five levels of difficulty ranging from easy to mania (which comes after hardest!), there is plenty of challenge for each person to find. I will say easy had a little challenge, while normal ramps up, and was tough. I couldn’t beat it on hard, never mind hardest or mania. Streets of Rage 4 even features online gameplay!

Co-op online was a lot of fun. Getting to smack some fools around with a partner is a must. There’s a Boss Rush mode that gives you one life to see how far you can get. With Story Mode, Arcade, Boss Rush, Battle Mode (online), or just joining somebody else’s game, there is plenty to keep you occupied for hours.

The sound is true to the original, in that late 80s to early 90s feel, and was a nice touch. Sound effects are pretty cool, and they didn’t do the annoying sounds of bad guys getting taken out, which was nice. Each track fits the stage perfectly. Visually the game is stunning and smooth with a steady frame rate even when loaded with enemies. It was like playing a cartoon with amazing animation.

For old school fans, there is plenty of unlockable content. From the original sprites, to screen effects like scan lines to simulate a CRT display. I could say a lot of bad things about this game, but I’d be lying about all of it!

From great musical and visual presentation, to smooth fluid gameplay and unlockable content, bundled with online co-op play, Streets of Rage 4 is an absolute blast to play. Not disappointing in the least, it’s more than just the finest addition to the series; it’s the best in the genre, in my opinion.

From great musical and visual presentation, to smooth fluid gameplay and unlockable content, bundled with online co-op play, Streets of Rage 4 is an absolute blast to play. Not disappointing in the least, it’s more than just the finest addition to the series; it’s the best in the genre, in my opinion.