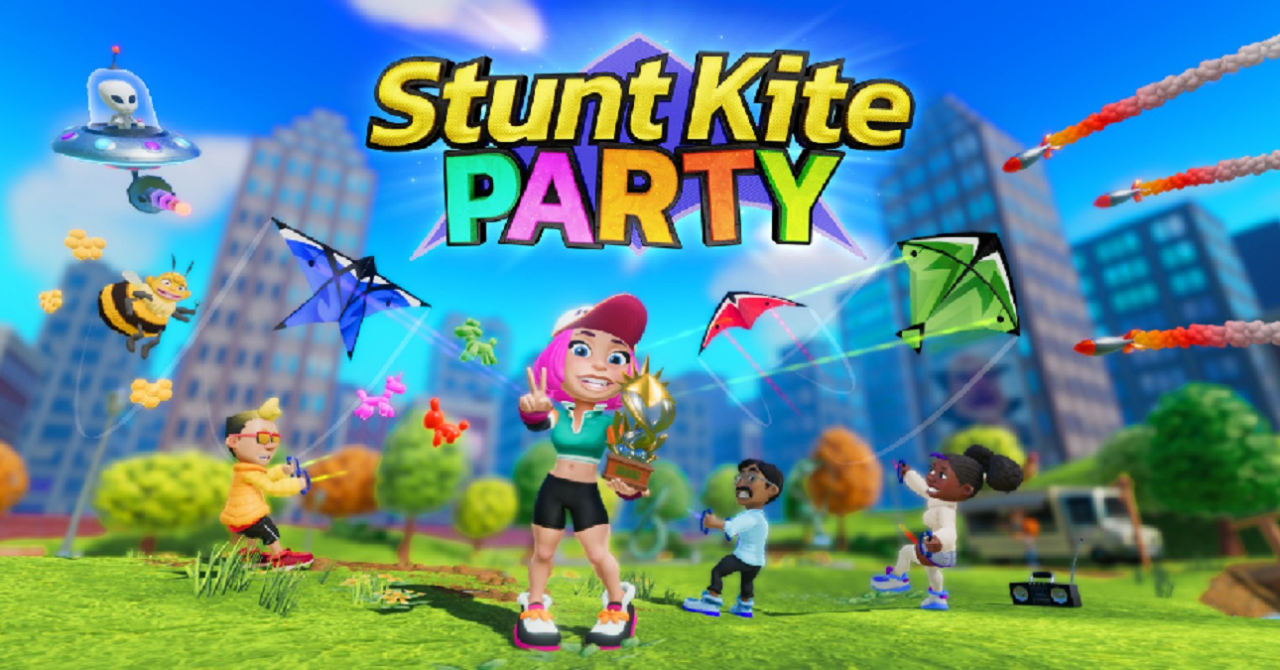 I can’t say I remember ever seeing a video game about kites before. How would the controls work? Would there be enough content to fill a whole game? Let’s take a look to see what Stunt Kite Party has to offer!

There are 10 different mini-games that are featured in the three game modes, all about flying kites obviously. Half of the minigames boil down to having three lives and trying to last the longest, while the other half involves getting the most points at the end of the time limit. During each mini-game, items pop up for you to collect and use to either enhance your abilities for a limited amount of time or to mess up the other player or computers. My favorite mini-game would probably be Bumblebee Banquet, where you gather honeycombs to feed to the bumblebee flying around. But you also have to avoid the chestnuts that float about, as hitting those causes you to lose the honeycombs collected. The minigames are overall okay, but while playing them I found it a little hard to control the kites since you’re only turning left and right. But I guess it makes sense for the controls to be like that to mimic a real kite.

Story Mode is one of the three different game modes and has cutscenes of a plot that plays out in between mini-games. The story is about a Mayor who hates kites ever since he got hit by one and had them banned, but that is the most normal part of the story! I found it difficult to explain to others because it was so random, with aliens, robots and a giant bumblebee popping out of nowhere. The characters in Stunt Kite Party are also written in a way that it seems to try too hard to be cool and a little edgy with euphemisms in place of swear words, which I find pretty jarring. The game is rated ‘E’, right? “Bullspit” is a bit too close to a swear to me for the rating it received.

The other two game modes are Cups and Custom Tournament. Cups have you play a group of mini-games against either a computer or friends to try to get the most points. You earn points after you either beat or lose a minigame and receive higher points if you win. After you beat the first cup you unlock the next until all five are all unlocked. Custom Tournament is where you can select one to 10 mini-games to play with other players or computers. It is a bit more fun to play with others, but the repetitiveness of the formula of the minigames can get boring after a while and doesn’t last all that long.

Overall, Stunt Kite Party is a very polished looking title but with a bit of an underwhelming premise to it. There isn’t a whole lot you can do with kites and they did the best they could do with the concept, but I just feel like, in the end, this game left me empty. It’s at a pretty good price of $9.99, which is fair for what you are getting. I can’t say for certain if I’d replay this title anytime soon, but if I do it will be to share with someone random Story Mode plot.

Overall, Stunt Kite Party is a very polished looking title but with a bit of an underwhelming premise to it. There isn’t a whole lot you can do with kites and they did the best they could do with the concept, but I just feel like, in the end, this game left me empty.