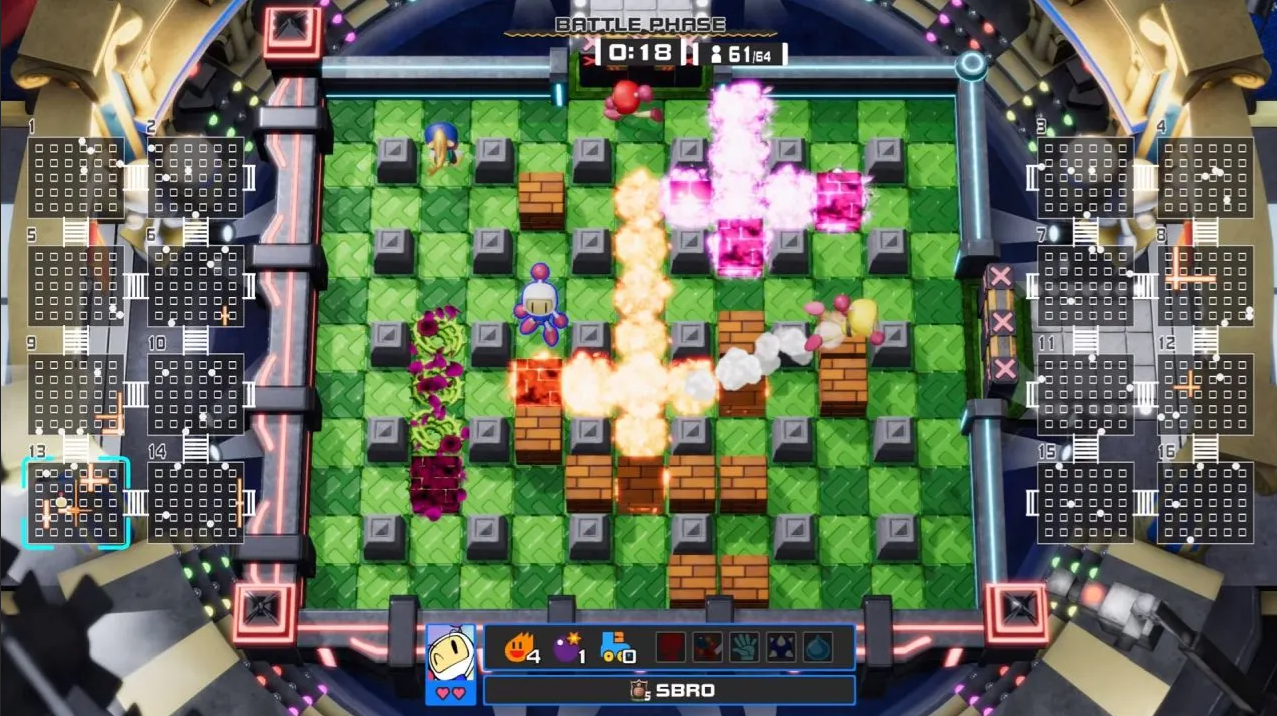 The online multiplayer offering of Bomberman for the Switch, Super Bomberman R Online, is your standard ranked global co-op platform.

Anyone familiar with a Bomberman game will already know how the basic gameplay works. You play as one of four bombers in a 13-by-13 square. You bomb blocks that obstruct the space between you and your opponents, collect power-ups and then blast other players without getting bombed yourself. The last player standing wins.

The 64-player battle royale format allows more people to fight it out than your standard arcade game. The 64 bombers are split into 16 classic four-player stages. You play the regular game for a minute, then two stages are eliminated and players in those areas have to reach a safe stage to continue playing, where another round of blocks fall and the battles begin again. As usual, the last player standing wins. 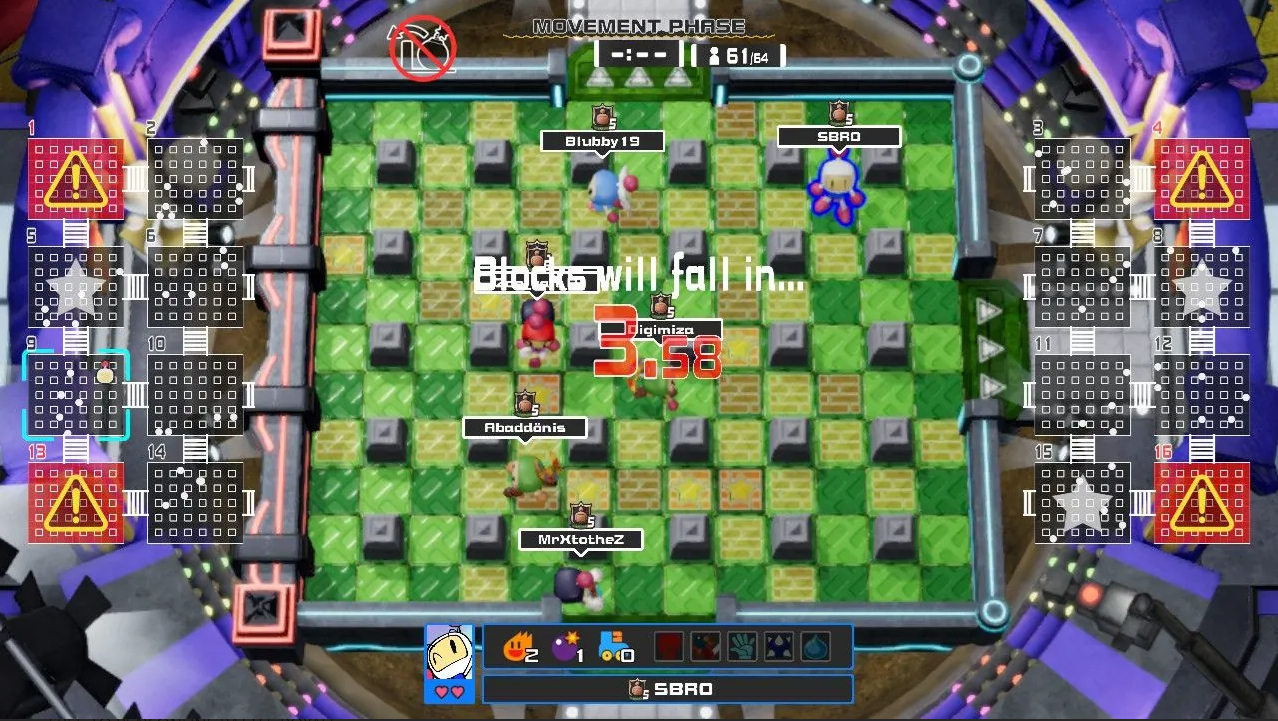 This is a simple and effective way to expand the standard game to suit more players in a way that doesn’t alienate anyone with experience with the series.

Super Bomberman R Online offers bonus incentives to carrying on playing the same arcade game over and over again. It’s gamified in the form of levelling up, increasing your Rank Gauge and unlocking new outfits, taunts and accessories for your bomber as you hit certain milestones.

You can also purchase a Platinum Pass for some bonus features. These include being able to set up rooms for private matches with your friends and some new bomber skins. Each bomber skin comes with different stats and the premium ones also have special abilities such as knocking back opponents or bombs. These in no way guarantee a win, but it does feel a bit like you can buy an advantage over people playing the regular free mode. 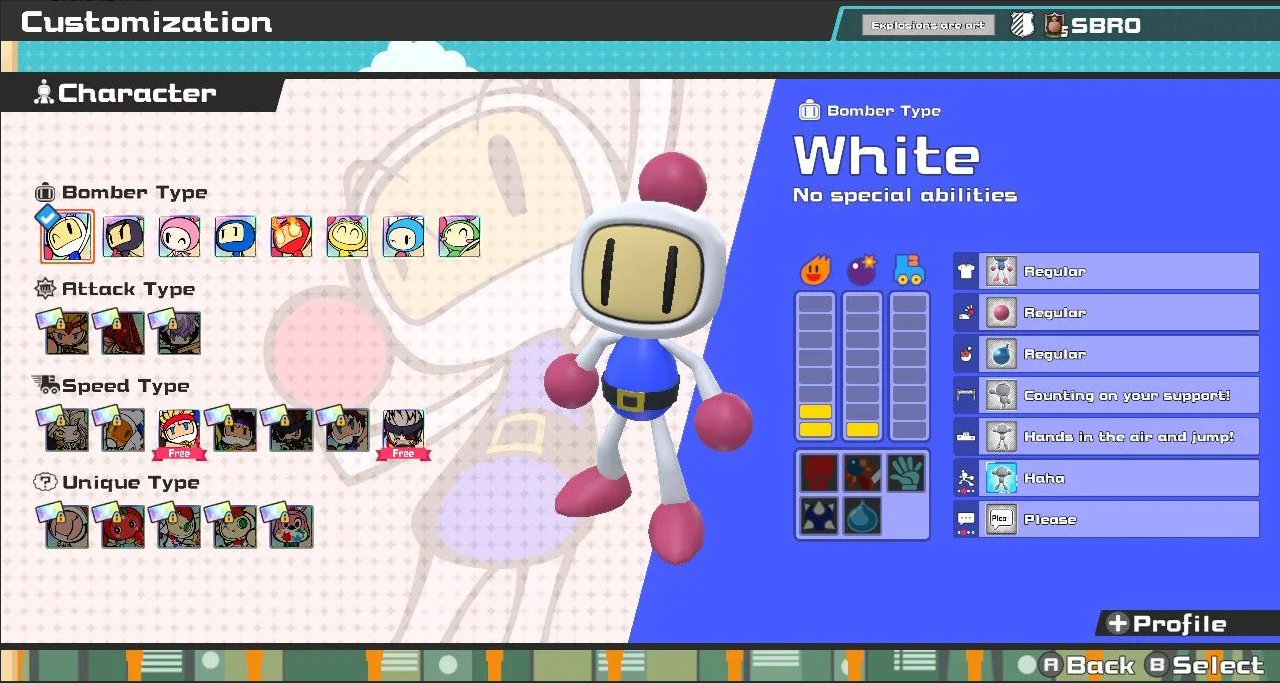 There is quite a bit of wait time with Super Bomberman R Online. This is understandable for an online game, but it feels less slick than games like Tetris 99 that have a relatively quick pace all things considered. By contrast, Super Bomberman R Online has a ten-second countdown to encourage you to finish customising your character, which is just empty space if you’re using the same one as your last game. This is followed by further wait time featuring hints that you won’t need if you’ve ever played a Bomberman game before.

Arguably it’s better to have a longer load time than a live game that lags, so it’s not a huge issue, but it is noticeable.

Super Bomberman R Online gives you all the standard things you’d expect from an online multiplayer platform. There isn’t much in terms of special features that make it stand out as being hugely different to similar games. If you won’t make use of a private stage, you’ll be able to get competitive just fine for free.