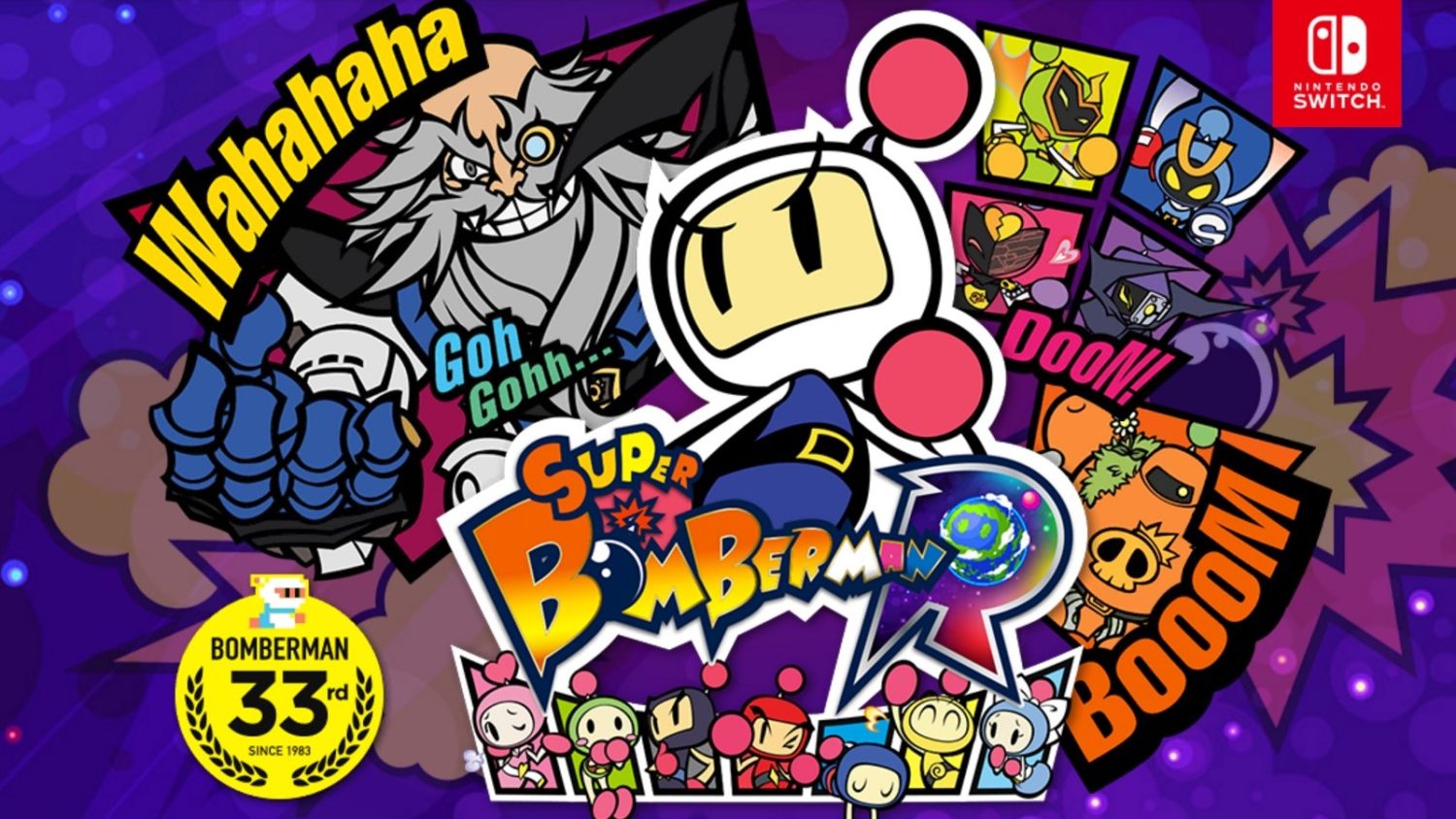 Bomberman has had a long history with Nintendo, with at least one game in the series releasing on almost every console. Super Bomberman R continues this tradition as a launch title for the Nintendo Switch, but after 33 years of Bomberman, does the series have any more tricks up its sleeve? 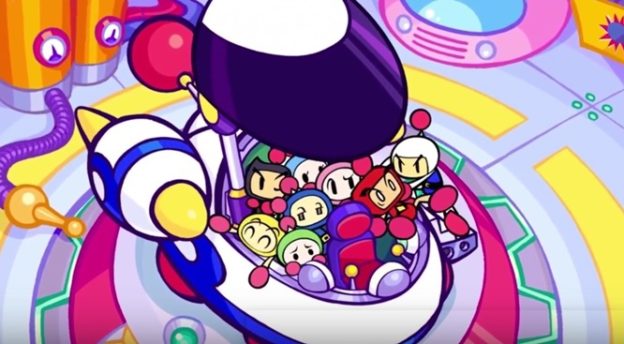 Presentation-wise, the Super Bomberman Rangers look great in HD. Characters are bright and cartoony, and the stages look like toy dioramas which adds to the game’s charm. As you play through the main story, you’ll be treated to some voice-acted cutscenes, and the Saturday morning cartoon-style antics they contain are a lot of fun. The Super Bomberman Rangers themselves are also a good time, as each colored bomber has their own personality, whether it be sleepy, cool, or fiery, and this makes you connect with the characters on a basic level. The music in the game is also very nice, and I noticed myself getting a few of the tunes stuck in my head. For all intents and purposes, Super Bomberman R may be going for a more simplistic, cartoony design, but it pairs well with the fast-paced action on the screen. 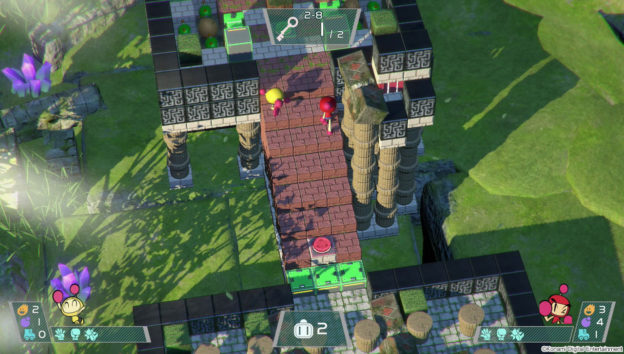 When it comes to gameplay, not much has changed in 33 years. Players are tasked with guiding their bomber through a maze as they blow up obstacles and enemies in their path with bombs. There are power-ups to collect, which can allow you to throw bombs or increase your blast range, for example, and you’ll still have to be careful not to get caught up in your own blast. New to the series, however, are the introduction of multi-leveled stages. Having a two-storied stage might sound intriguing at first, but due to the segmented nature of the maps, it feels more like clearing out one half of the map first before moving up a ramp to finish the upper portion of a stage rather than zooming back and forth between levels in order to complete your goal. 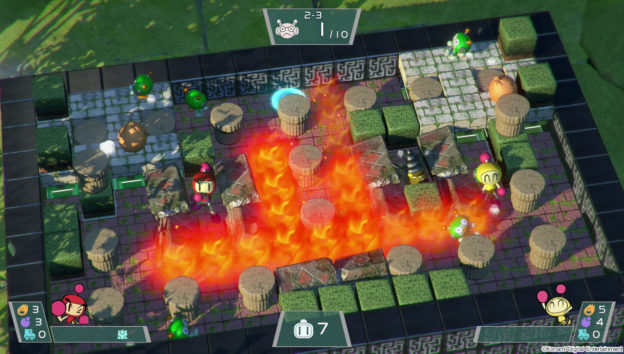 Controls are simple, with the A button dropping a bomb and the control stick or D-pad allowing you to move around the stage. With the latest update, the controls feel much more responsive, making it much easier to drop a bomb to trap an enemy without getting hit due to input lag. As you play through story mode, you’ll earn coins which can be used to purchase more stages for multiplayer battles, as well as costumes to make your bomber look unique. The costumes are just for show, but they do add a small bit of customization for those that want it. Coins are also used to allow yourself to continue should you lose all of your lives during a mission. The amount of coins you earn for completing a world and for having to continue vary depending on what difficulty level you choose, so you’ll have to think carefully about what difficulty you play on. 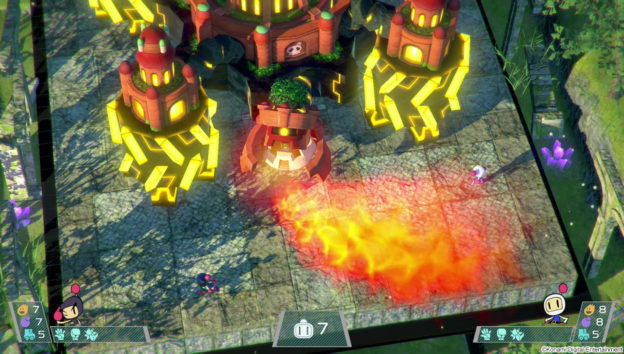 Super Bomberman R’s story mode pits you against the Evil Emperor Buggler and his five dastardly bombers who have each taken over one of the five planets in the Starry Sky solar system. The Emperor then challenges anyone who thinks they can beat them to restore peace, and Bomberman and his brothers and sisters set off on a quest to save the universe. With the silly, cartoon-villain stage set, you’ll journey to each planet on your quest, and each planet will feature eight regular stages and two boss battles. Stages will vary in what challenges you have to overcome, some may require you to defeat all enemies, while another may have you rescuing a group of people. Played in small bursts, the variety is enough to keep you engaged, and the introduction of new stage hazards on each planet such as pitfalls or ice keep you on your toes. The boss stages start off like a traditional Bomberman game, where it will be you, pitted against one of the dastardly five as you both attempt to blow each other up. The second boss stage takes place in an open arena, where you must destroy the mechs that each one of the dastardly five pilot. These mech bosses allow for free, 8-way directional movement, and it adds some nice variety to the game. 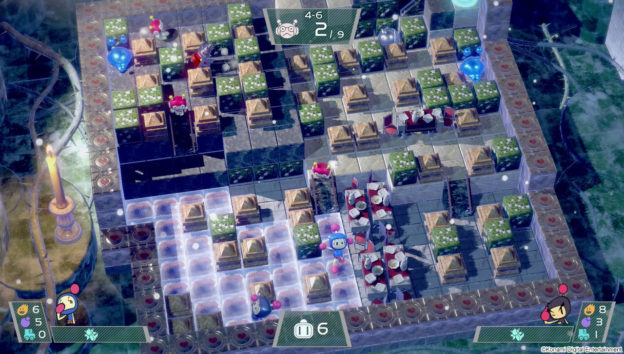 Multiplayer has always been where Bomberman shines the brightest, and Super Bomberman R is no exception. With the ability to have up to eight players battle simultaneously in local or online multiplayer, the action is fast-paced and frantic. Even if you get blasted early, you don’t have to sit and wait for the match to be over, as you can hang out on the edge of the stage chucking bombs at your foes. If one manages to hit, you’ll switch places with your victim and be back in the game. Occasionally, you may trap yourself with a bomb on accident due to lag if you play online, but for the most part playing matches with others over the internet is a quick and simple process. Just create or join a room, wait for some players to join, and off you go. There is an option to play matches for fun, or you can play to try and increase your online ranking, and the game will use this ranking in order to pair you with similarly ranked players. Most of the joy you’ll have with Bomberman will be online or with friends. 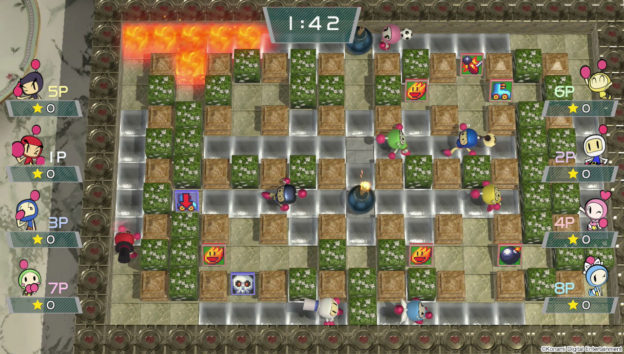 When it gets right down to it, Super Bomberman R is a pretty average offering to Switch owners. While the presentation is great, the single player campaign doesn’t do much to shake up the time-honored Bomberman formula, and you’ll have beaten the game in no time. Sure, there are other characters to unlock once you’ve beaten the game, but there is little incentive to go through the story mode a second time. Multiplayer has always been where Bomberman shined the brightest, and while it is a good time, expect this game to get outshined by heavy hitters such as Mario Kart 8 Deluxe and Splatoon 2 when they release. Unless you’re a huge Bomberman fan or are desperate for some online multiplayer on your Switch, this is a title to pick up when it’s on sale, as the content is good, but not enough to justify the $49.99 price tag.

While the presentation of Super Bomberman R is cartoony and colorful, the fact that the game doesn’t add much new to the series, and the amount of content (even if it is quality), provided feels like this should have been a $20 game rather than a full retail priced game.