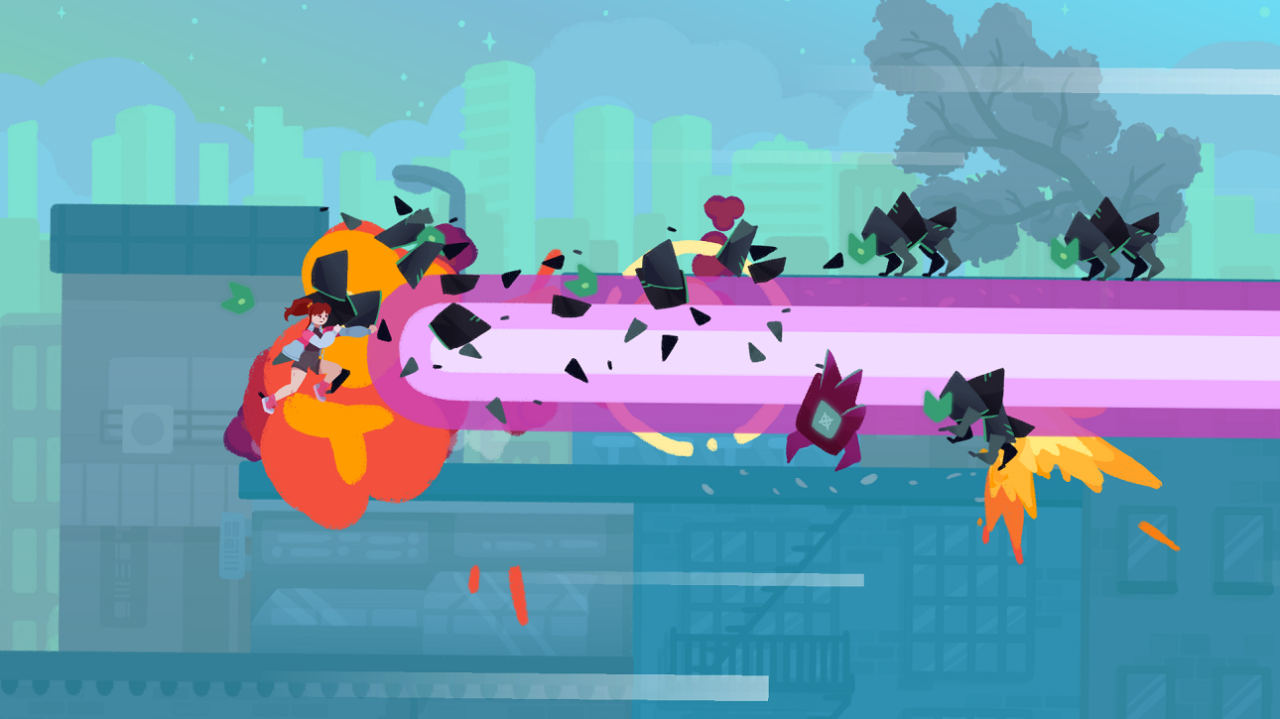 I first played Super Crush KO as a demo at E3 2019, a small game tucked away on the show floor. It impressed me with its fluid controls, so I kept it in mind for its eventual release. Now that it’s launched on the Nintendo Switch, how does it shape up? If you were a fan of Graceful Explosion Machine, an early launch window Switch game from developer Vertex Pop, you’ll likely enjoy Super Crush KO as well.

The games have quite a few similarities. Of course, Super Crush KO is more of a run ‘n’ gun shooter than a sidescroller. Still, the focuses on just a few attacks, executing combos, and climbing the leaderboards with high scores is very much present. Karen, the lead character you control, has a handful of attacks to try and rack up combos against the robotic threats as she searches for her missing cat. The fluid control makes the rescue action a joy, but I soon realized several of the unlocked moves were unnecessary. A mix of standard melee attacking, gunshots in the air, and the occasional Super Beam were all I needed.

The levels Karen progresses through don’t have bad aesthetics, but they do tend to look and sound rather similar. The diversity of the regular enemies is no issue, as the varied design is quite good. Well, mostly good; one late-game enemy (surrounded by a shield and with a homing attack) I could’ve done without. Far worse are the boss fights, that tend to blur together in a repetitive fashion. They should’ve been a highlight, but instead, they were my least favorite parts. I much preferred the usual juggling of a cluster of enemies. Despite the fast-paced action, Super Crush KO has no performance issues.

Platforming, while not prioritized, is certainly needed to achieve S-ranks. The lure to improve your score is real. More importantly, I always believe I can improve, which is good as the game doesn’t take too long to beat. My belief stems from Super Crush KO’s tight, responsive controls, which easily win you over with Joy-Cons in-hand. I only wish I could enjoy the experience with a friend. Co-op seems like a given, so its absence is head-scratching. Solo players are left to compete with friends (and the world) over online leaderboards.

Super Crush KO offers up some fluid action that proves to be addictive. However, the weak boss encounters and bewildering lack of two-player co-op hold the game firmly in the ‘good but not great’ territory. Fans of Vertex Pop’s prior work will still want to check it out, especially those who enjoy climbing leaderboards.

Super Crush KO offers up some fluid action that proves to be addictive. However, the weak boss encounters and bewildering lack of two-player co-op hold the game firmly in the ‘good but not great’ territory. Fans of Vertex Pop’s prior work will still want to check it out, especially those who enjoy climbing leaderboards.