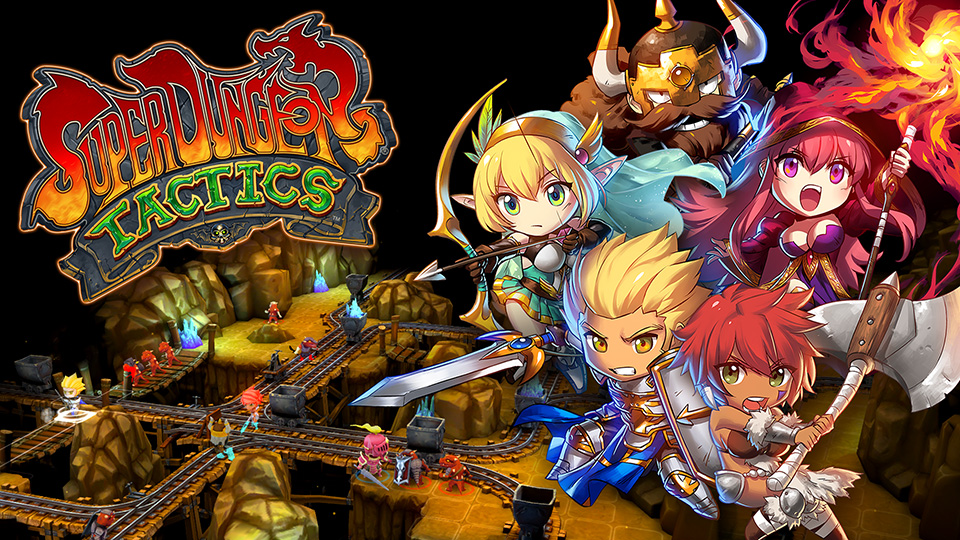 Not all adventures happen in video games. For a lot of gamers, adventures take place on a tabletop, usually with dice. If you miss that mechanic in your RPGs, Underbite Games has brought it back in a very unique way with Super Dungeon Tactics, now available for Nintendo Switch. 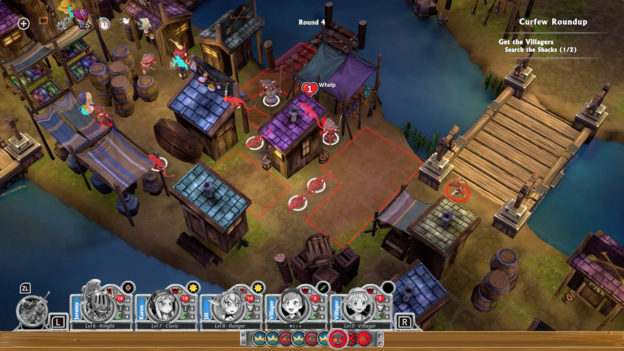 Let’s put that discussion off for a bit, however, as it’s actually only a minor part of what makes this game so much fun to play. I’ll start with the presentation, which is a far cry from the heavy melodrama that often accompanies this type of game. Don’t get me wrong…I love that kind of thing, but the breezy, often humorous tale in Super Dungeon Tactics was quite refreshing.

Based on the tabletop game Super Dungeon Explore from Soda Pop Games, Tactics starts us off with a dwarf and a mage of different skills and personalities. You get to name them (as with each of the game’s 15 heroes), run them through the obligatory tutorials, then start their adventure. New heroes are added as the story progresses, but there’s a surprising twist here. In an early level, I got to pick only one of my three available characters for battle. Once the level began, however, I discovered that random villagers were also placed under my control. It’s much easier to keep characters alive when you get to tell those characters exactly what to do.

The trick is that you don’t know what abilities they’ll have until you meet them on the battle grid. This is important because all of your preparation happens between levels. Your heroes themselves don’t level up, the items do. As such, equipping the right items is key to helping you through the battles. 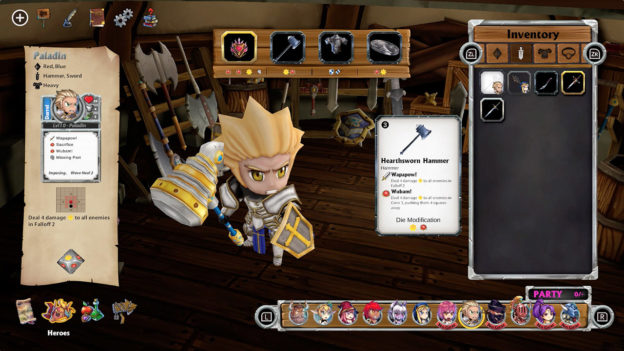 Your slots are few, however, so complementing your heroes’ abilities is important. That may seem unfair when you don’t know what kind of help you’ll get (if you even do), but chance is very much a part of this game. Also consider that, because it’s the quality of the items that matter, you can swap out characters between the battles without penalty; those you don’t use often won’t lag behind the others. This is important because Super Dungeon Tactics will often take certain characters away from you at times, forcing you to pick one you may not often use.

Sticking with the chance element, we’ll talk about the dice now. Before each round, dice are rolled onto the bottom of the screen (with some fun, nearly realistic physics, to boot). These display buffs and debuffs that have to be assigned to proceed. 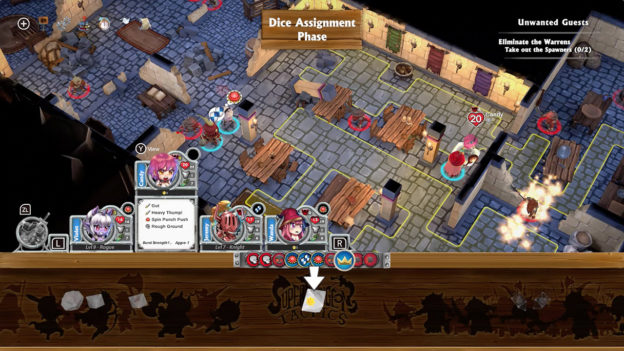 You’ll want to match the buffs to the characters that could most benefit from them (extra defense for a character about to be attacked, health for a character who needs it, etc.), but the bad guys get to use some, too. In addition, debuffs have to be assigned if that’s what is rolled. Part of the strategy is to determine which of your characters will have to bear this burden, and what to do with them once the combat begins.

Combat, by the way, is turn-based. Move around the grid, attack, create choke points, heal up…each character has a specific movement and attack range based on the equipped weapon, and where you leave them after their turn is important. Perhaps to compensate for the randomness of the die rolls, you’re able to determine in which order your characters move. On the negative side, I couldn’t find a way to learn the order in which enemies would move, and I therefore often focused my attacks on the wrong character.

The battle grids themselves can be quite expansive, and they’ll often grow bigger just when you think you’re about finished. New areas are unlocked during the fight, or objectives may change entirely, forcing you to change your tactics and split up your group. This really added to the fun, and it helps that the grids are nicely designed and brightly illustrated, providing an excellent backdrop for the chibi-style characters that really do look like animated playing pieces on a tabletop. 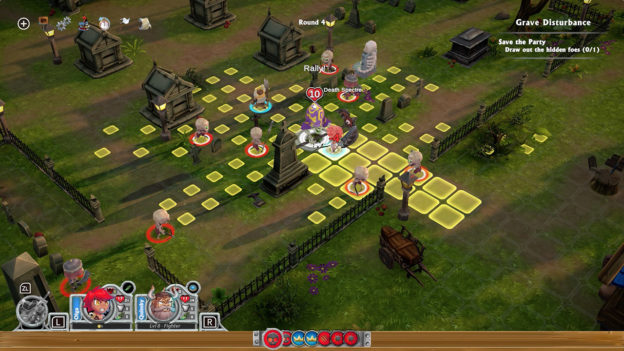 On the other hand, the controls for moving your character and rotating the camera are not intuitively assigned on the Switch. This proved extremely frustrating throughout the game, and there’s no option to reassign them. In fact, the entire UI between battles is kind of a mess until you’ve worked through it a few times. Worse, some of the text is extremely difficult to read in portable mode, but Underbite Games has reached out to let us know this will be addressed in a future update.

Super Dungeon Tactics has been out for computers and other consoles for a while now, and that works to your advantage; the Switch version is available to download for only $19.99, making it an excellent option for fans of turn-based RPGs. With its clever and accessible combat management mechanics and a charming array of characters, Super Dungeon Tactics is definitely a title worth checking out, especially for those enjoying God Wars or who fondly recall the Luminous Arc series.