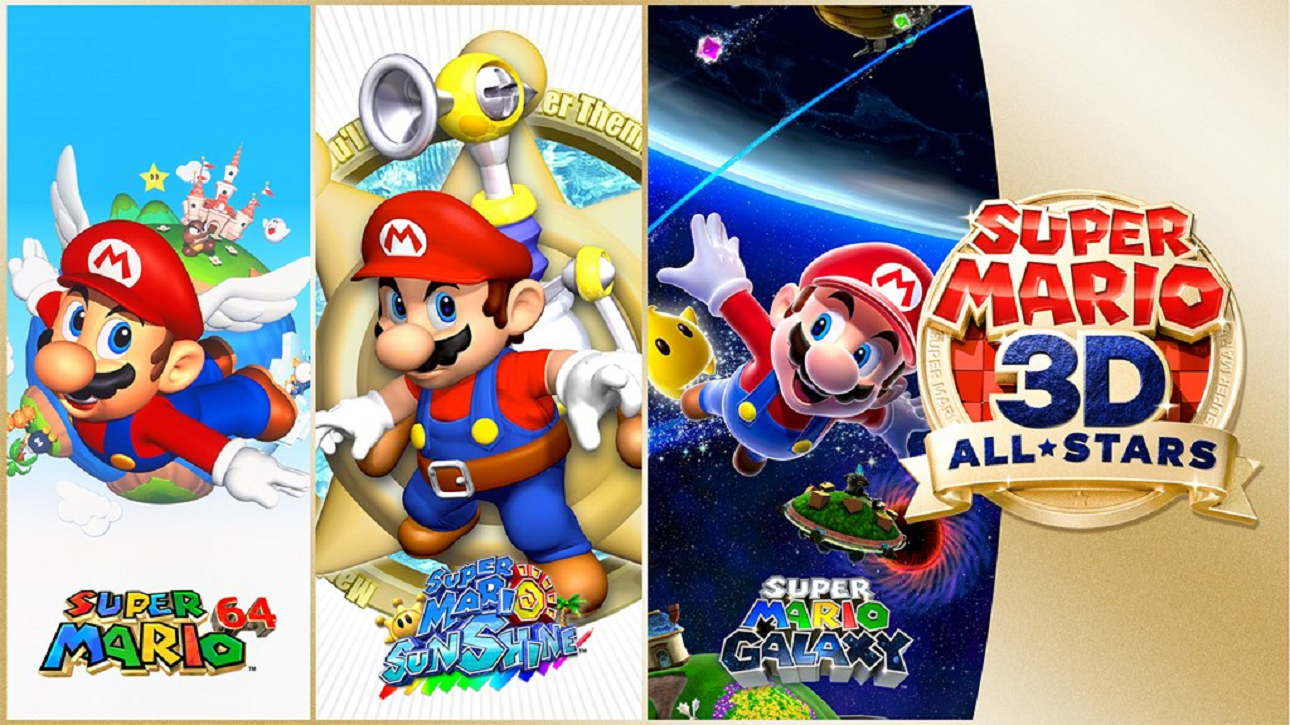 Just as a recap, Super Mario 3D All-Stars is a compilation consisting of Super Mario 64, Super Mario Sunshine, and Super Mario Galaxy. All have been altered slightly from their original releases, mainly changed button labels, but for the most part, they’re just HD ports of three classics. Also included here are the original soundtracks to each respective game for your listening pleasure.

The presentation here is minimal, but works. You’ve got a clean, sleek looking game/soundtrack select screen, and that’s about it. I especially like how it plays random music from the soundtracks in the background here, though. It’s always fun to see what ends up getting picked each time you’re there. Now, onto the games!

Super Mario 64 was the game I was least excited about here. I’ve played a ton of it before on both the N64 and Wii U VC, and it’s the only game here that isn’t in widescreen.  I can’t help but wish they’d have gotten widescreen to work here; that would have been awesome. However, I was honestly shocked at how fresh the game felt playing it on the Switch. The HD coat of paint looks quite sharp, and after a bit, I forgot about the limited aspect ratio.

A further reason why I wasn’t too excited to replay Mario 64 is I’ve always felt it needed to be played with an N64 controller to enjoy properly. I couldn’t get into it as much on the Wii U VC, even with the Pro Controller, one of my favorite controllers of all time, so I figured I wouldn’t care for it here either. But much to my surprise, the game controls amazingly on the Switch. It’s very tight, and the short throw of the Joy-Cons control stick works superbly here. I dare say I like playing it with Joy-Cons more than the N64 controller! It makes me hope Nintendo will release N64 Online someday (hint hint, Nintendo).

While 64 may have been my least anticipated game here, Super Mario Sunshine was absolutely my most. I know Sunshine is divisive among Mario fans, but I loved it on the GameCube and was thrilled to replay it again. The big question here is: How does FLUDD do without a pressure-sensitive trigger? My answer: Just fine. It’s weird at first, but I got used to it after a little while, and now kind of forget about it. That said, it would have been awesome for Nintendo to have GameCube controller support, so there was the option to play as originally intended.

The HD, combined with the widescreen, is stunning here. I went back to the GameCube one after trying this one for a bit, and it makes the original seem so much more constricted in camera space. My only real qualm about this port is that for some reason, they changed FLUDD’s aiming controls (so that up is up and down is down), whereas they are reversed flight-sim style in the original. It tripped me up at first, and I still occasionally forget; muscle memory is hard to change.

Super Mario Galaxy was the game I was most interested in, so far as seeing how the Switch port would do. Collecting star bits would be an interesting hurdle for the dev team, and playing their results, has left me a bit mixed. Playing with the Joy-Cons in TV mode is OK. It feels less precise than the Wii pointer did, obviously, due to the fact the Switch doesn’t have a sensor bar, but all-in-all it works well. Handheld mode utilizes the touch screen instead, and works much more precisely for collecting bits, but is a tad awkward.

The HD and widescreen here are, again, great. Being able to use ‘X’ or ‘Y’ to spin is also a great touch, and I’m glad they also let you shake to spin if you’d rather. I’d forgotten that there were a few instances where you were required to use tilt controls, and they’re here as well. They work decently, though it’s a little unwieldy in handheld. All-in-all, I’d say they did a good job porting Galaxy onto Switch, though it’s my least favorite in the collection simply because I like 64 and Sunshine better.

So there we have it; three excellent ports of excellent games. Though there are a few nitpicks I have, these game’s excellence largely overshadows them. Playing Sunshine and Galaxy, particularly on Switch, simply feels unreal; I caught myself several times while playing, thinking to myself how this collection feels like a dream. An absolute must-buy.

While a few nitpicks hold it back from absolute perfection, Super Mario 3D All-Stars is an amazing collection and a definite must-buy.