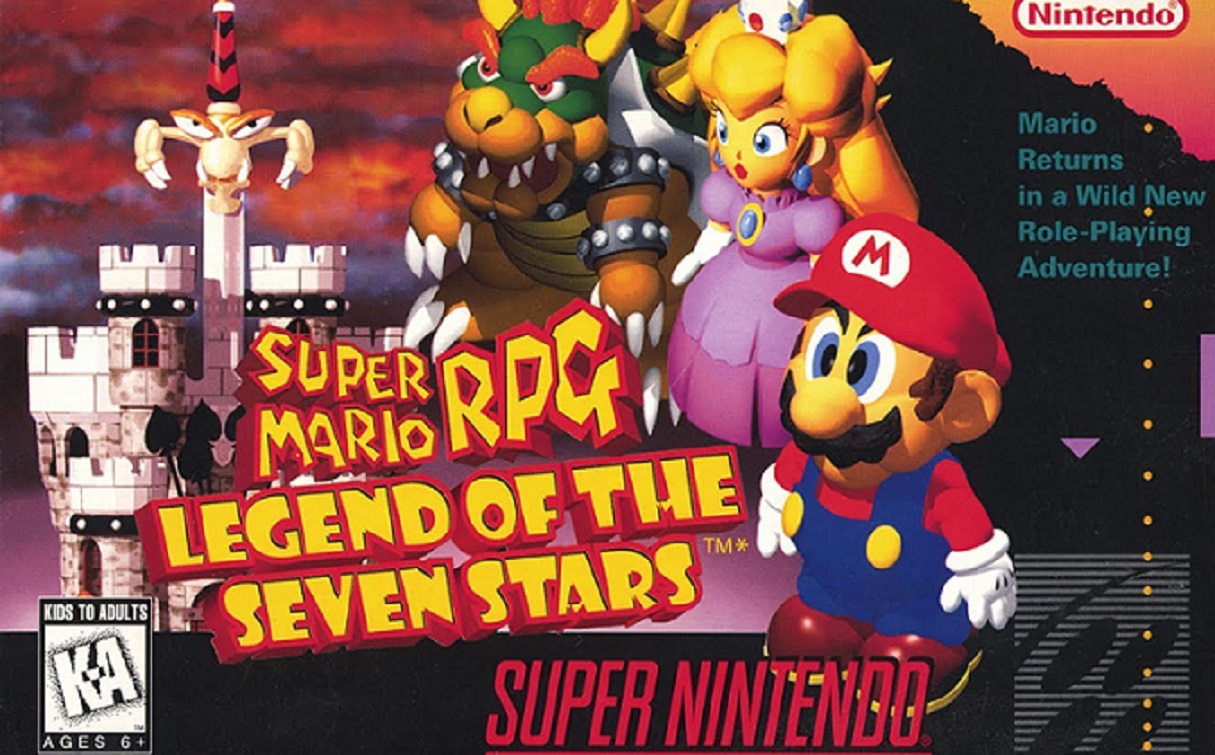 While we’ve already published a large Retro Review of this game way back in issue #14, its release on the Wii U Virtual Console this past summer gives an excuse to revisit. Not that there’s ever really a wrong time when it comes to a classic like Super Mario RPG: Legend of the Seven Stars. The original, even 20 years later, is still considered by a many to be the best.

With Smithy and his gang of villains causing “fear and treachery in the Mushroom Kingdom” it’s up to our favorite mustached plumber to save the day. Having a new villain on hand remains refreshing. What about Mario’s old nemesis, Bowser? This time King Koopa joins forces as a helper to Mario, a huge first that can’t be overstated. It’s no wonder it was highlighted as a key advertising point.

This is an accessible game, and I mean that in the best way possible. Keep in mind that when it originally released, RPG’s were still considered a niche genre in the North American market. Rest assured the accessibility (too broad to detail here) doesn’t make it any less an RPG gem – after all developer Square released the marvelous Chrono Trigger only a year or so prior. On the Wii U Off-TV play can be enjoyed via the GamePad (perhaps the closest we’ll get to a portable version of this gem). Restore points may be unnecessary – the game already has a fine save system – but a few well-timed ones can save replaying sections, adding to its accessible nature.

Jargon like “32 meg”, “fully rendered”, “SGI”, and “Super Accelerator Chip” were used in connection with this game, and perhaps their meaning wasn’t fully grasped. The long and the short of it, this is an exceptional looking SNES game. It’s vivid graphics – complete with Mode 7 effects – show the console at its best, and how developers had tapped its full potential by 1996. The same extends to the audio as well. Yoko Shimomura’s soundtrack is stellar, especially considering this is a cartridge game. Her work carries on in Mario RPG games to this day.

This game has so many memorable moments for me. The nod to Mario’s plumbing origins when exploring the Kero Sewers, using Mallow’s Psychopath move to view enemy HP, tumbling down a waterfall for a mini game (the first of many), finding hidden surprise boxes scattered about, observing Princess Toadstool’s cleverness, and more. Fond memories indeed!

So much more could be said about this game. Much of it already has been, and some would border on decades old spoilers. Even with nostalgia, it’s hard to deny what a bargain this game is at just $7.99 – just a $1.50 if you do a transfer. Though Mario’s platformers (and Kart racers) are still my favorites, he absolutely nailed the RPG genre on his very first attempt. Download Super Mario RPG: Legend of the Seven Stars on your Wii U.  I’ll look for some of your own nostalgic thoughts on Miiverse.