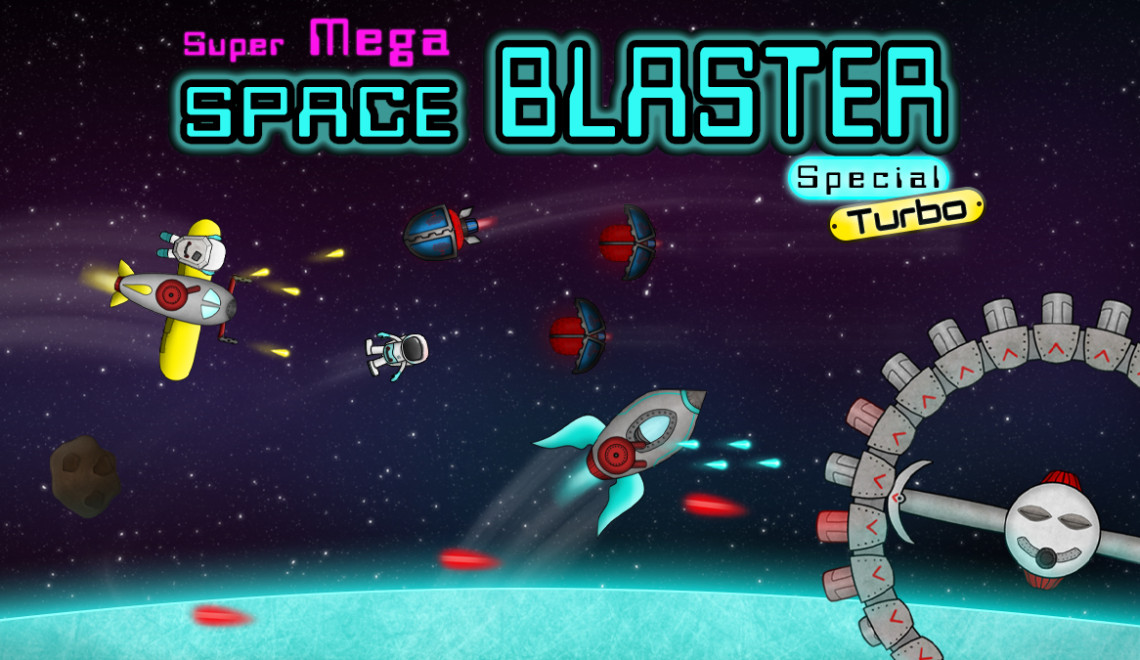 Super Mega Space Blaster Special Turbo is one of the longest-titled games on the Nintendo Switch; I looked it up. It’s also a tricky shoot ‘em up with some fun and addictive gameplay elements.

Shoot ‘em ups belong to a seemingly simple genre, requiring good controls and lots of enemies to shoot. Yet so many fail at these basic elements. Thankfully this game does it right. The controls couldn’t be more straightforward – L and R buttons for shooting, ZL and ZR for speeding up and slowing down. 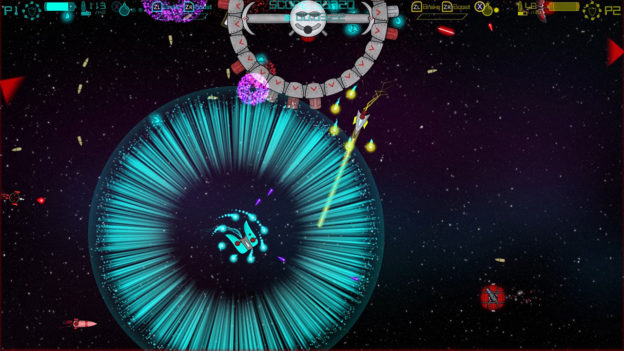 This method of acceleration and deceleration took a little getting used to. This isn’t your typical scrolling-level shooter that takes you through space or over cities to destroy whatever lies in your path. Instead, it’s set within one screen of action. You control your trusty ship and manoeuvre it around your rectangular parameters, waiting for enemies to come to you from beyond the borders. You can’t bump into the edge of your screen either, as this spells certain death. Once you’re accustomed to your playing field, the acceleration and deceleration become your best friends, as you nimbly glide around enemies. Well, you try to.

Another shmup staple is a high difficulty level, and Super Mega Space Blaster Special Turbo doesn’t let you down here either; this is a tricky game. You begin with a single shield. One hit leads to the loss of said shield; one more hit, and you’re out. Maybe two hits are actually pretty generous for bullet hell? 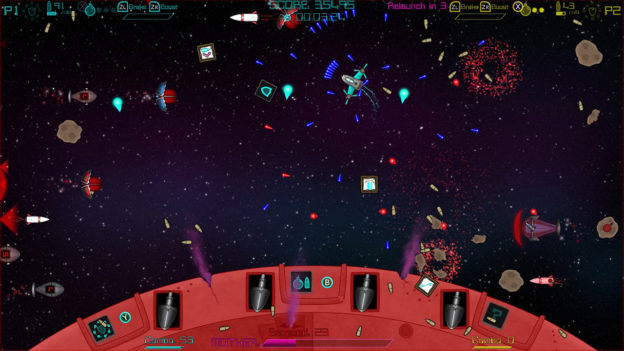 This rapid loss of life means that levels are over quickly, making this perfect for quick on-the-go playing sessions. It also creates a high level of replayability, with a strong sense of “just one more” as you try in vain to complete the mission at hand.

Speaking of which, there are five modes in Super Mega Space Blaster Special Turbo (every time I write the title I really want to write “super fun happy slide!” in honor of Homer Simpson). Three of these modes are designed for one or two players, the other two are uniquely multiplayer. 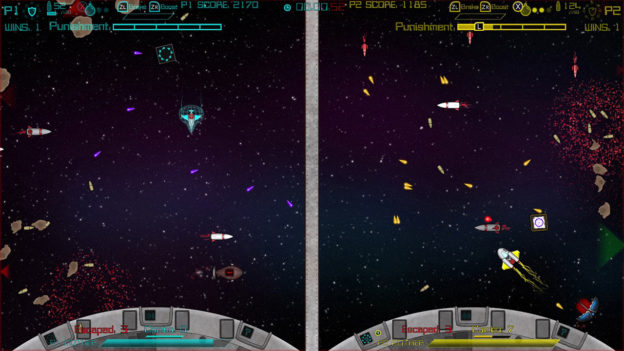 Firstly, let’s talk about the modes available to single players, because I like the way they’re designed, and each presents a unique goal that shakes this game up well. Firstly, there’s Protect Mother. Here you’re tasked with shooting everything in sight before enemies take out the mothership based at the bottom of the screen. In Save The Colony, your job is to rescue cute little astronauts floating through space – they even call for help, it’s adorable – and deliver them safely to the portal at the bottom of the screen. Naturally, enemies attempt to thwart these efforts. Finally, there’s the simply titled Survival mode, in which you’ll need to manage your fuel and ammo to survive until the big boss arrives. Each mode is fun, deceptively simple, and deliciously difficult. 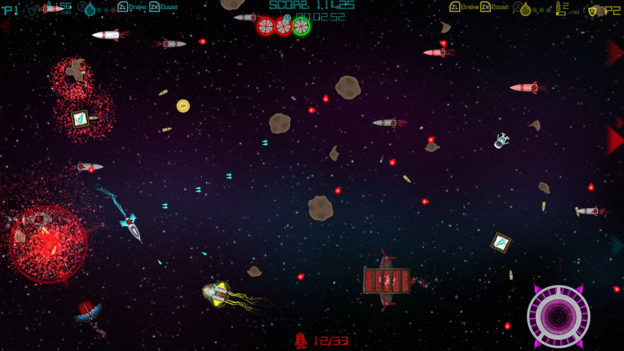 There are two modes specifically designed for two players, including To the Death and One Shot. Both are fun and challenging in their own right, and make the game more accessible to anyone with a friend on his or her couch.

The graphics are simple yet nicely done, with star-filled space backdrops. The enemies – mostly missiles and asteroids – are drawn in a clear, slightly cartoony way. Everything is colorful and bright, including the menu, which isn’t shy about using neon colors. When it comes to the user interface, the menu works well and the game loads quickly, a necessity for quick gaming sessions. 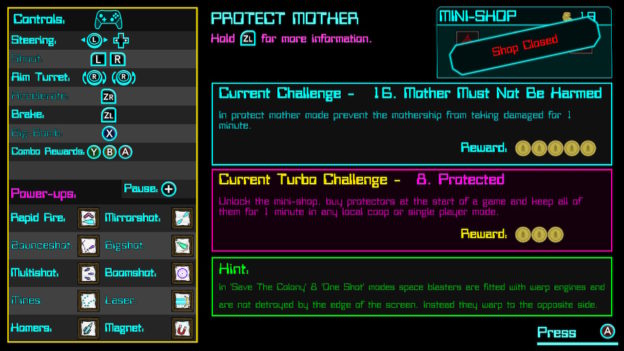 There are extra elements that bring you back for more action. Leaderboards are presented after each attempt at a level, showing your rank and any movement up the ladder. There are also plenty of unlockables – like ships and weapon improvements – as well as side missions. These missions add optional tasks to your list so that, while you’re rescuing astronauts in Save the Colony mode, you might also be trying to avoid shooting anything for a period of time to earn a reward. It keeps the game fresh and adds diversity to a genre that we’ve been playing for a very long time. The game is also a great price at only $4.99. I can see shmup enthusiasts dedicating a lot of time to Super Mega Space Blaster Special Turbo. If bullet hell isn’t already your cup of tea, the high difficulty level here probably won’t convert you.

Overall, Super Mega Space Special Turbo is a great shooter. It will hit the spot for genre fans, especially if you like it on the more difficult side. The various modes keep things interesting, with unlockables and leaderboards adding extra replay incentive. Take a shot on this one.

Super Mega Space Blaster Special Turbo may have an absurd title that’s hard to remember, but it’s a super-fun and addictive shooter, with plenty of modes and challenges. The high difficulty will please shmup fans, pushing you to play just one more time…