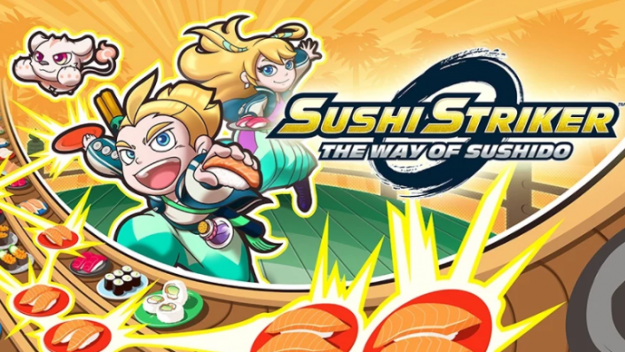 I didn’t know exactly what to think when I first laid my eyes on Sushi Striker: The Way of Sushido when it was first unveiled over a year ago. Upon first glance, an action-puzzler of this origin just seemed like it would be up my alley with its zany concept with sushi and high-paced gameplay. Eventually, from the amount of time I had with Sushi Striker on the Nintendo Switch, I soon found myself falling in love with its addictive mechanics while seduced by its own charm and surprisingly well-made production values. 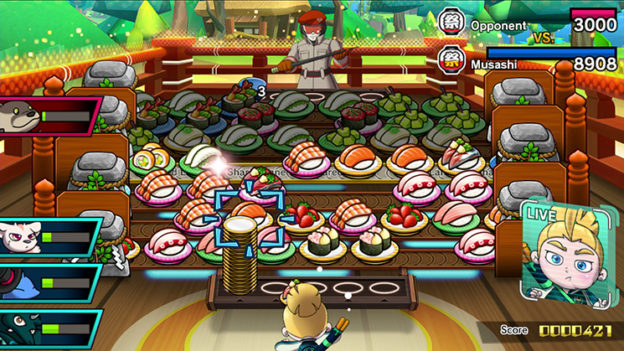 The set-up here in Sushi Striker’s gameplay is rather unique, but simple and deep at the same time. Throughout the game’s various levels you will be battling foes and colorful bosses across from each other among seven layers of sushi plates on a conveyor belt. Each player will have three rows (and one shared lane in the middle of the field) at their disposal to choose a wide variety of sushi plates to link. The goal is to link more than two colored sushi plates to stack as a means of attack. Once you have a stack of plates, it can be thrown at your opponent to decrease their health. The more plates you link, the greater the damage of your sushi striking. Each colored plate and/or dish also vary in damage as well, so where to properly link is key.

Sushi Striker’s plot, as silly as it sounds, revolves around the world’s sushi supply being under monopolistic control from an evil empire. Basically (and I say this with a straight face), a war was fought over the distribution of sushi and they somehow have these mythical properties used as tools of destruction. Now that I have laid out the silliness of that premise, please do know it has an interesting hook which at least keeps you smiling at every turn. For example, our hero Musashi will meet a wide cast of characters with varying degrees of weirdness who come packaged with off-the-wall commentary. Sure, these characters are filled with the usual tropes and such, but they were never ear-gratingly annoying or intolerable in which they caused me to skip a scene. Overall, it’s best to think of the story (and even the beautifully made anime cutscenes) as a forgotten Saturday morning cartoon that never got the love it deserved. 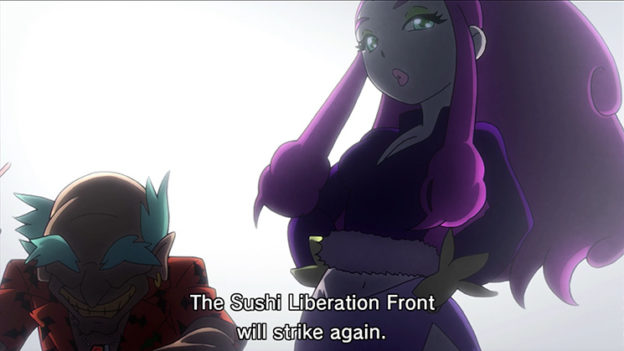 As mentioned previously, Sushi Striker’s gameplay all seems easy and simple on paper, but it does get rather hectic given the right scenario. One thing to keep in mind while battling is your jubilee gauge (located at the top right corner of your screen), which fills with every plate of sushi you consume. Once the meter is full, you will unleash a sushi jubilee that will inflict 150 percent normal damage in the span of 12 seconds. This method of attack strategy came in handy a lot through many battles as it will mean the difference in dealing a much-needed devastating blow if you are on the ropes.

While linking plate after plate, you will have to deal with balancing/creating stacks to attack and watching out for devastating skill attacks via their Sushi Sprites. These Sushi Sprites are basically your Pokemon-esque companions throughout your adventure. Sushi Sprites are one of the few aspects you must understand to better yourself in battle. They may provide better offense, defense, or help regain your health. You are allowed a total of three sprites in battle and they can interchange in any order of preference. Much like with Pokemon, Sushi Sprites can somewhat evolve into new forms. The use of Sushi Sprites add a cool bit of depth to combat, while also adding more ways to address an opponent. At times, I found myself preferring one sprite over the other, yet when needed I would adjust my strategy by going back to a sprite with the appropriate skill set. This is where I found myself becoming enamored with Sushi Striker’s combat and sense of added depth. Not once did I feel like a battle felt overly repetitive or boring. Plus, there’s just something special about having your Sprites’ skill gauge filled at the right moment to deliver a life-saving move. 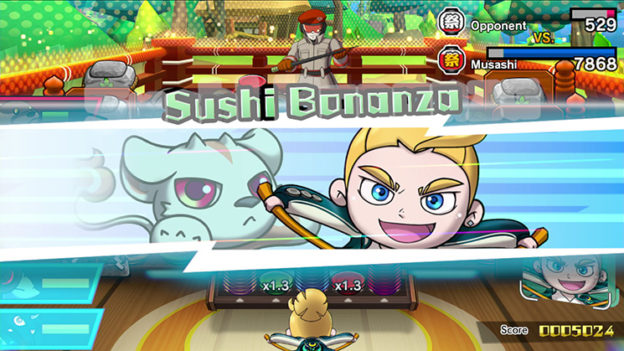 In addition to befriending cutely animated Sushi Sprites, there are lane-drive gears, which control how fast or slow lanes move during battle. These gears come in many forms and can be added before each battle. You can earn gears during the game’s story or by meeting specific requirements in battle. Customizing your specific likes and dislikes of lane speed were helpful as I was more in tune with slow and fast lanes depending on my play style. Still, with Sushi Sprites and added perks such as lane-drive gears and preferred sushi dishes, the game doesn’t slouch at all with giving you many options for all kinds of experimentation. 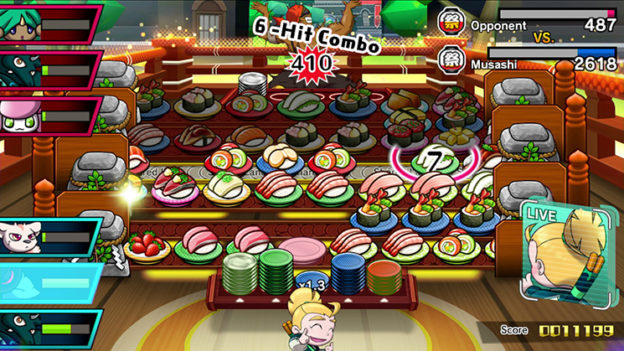 My one concern going into playing Sushi Striker had mostly to deal with the platform of choice given the game was originally a 3DS exclusive. I feared that with only one screen as opposed to two would make the Switch version highly inferior despite the HD upgrade. Thankfully, that was never the case. Sure, the 3DS version has the advantage of being able to link sushi plates via the bottom touch screen without any bit of obstruction, but that doesn’t mean the Switch version shouldn’t be scolded. Yes, it takes some getting used to linking plates with just the control stick but it soon becomes second nature whether you are using it in docked or handheld mode. Now, using the Switch’s touchscreen during battles it can be a tad troublesome. It is, of course, seamless with the Switch’s multi-touch screen but I was finding myself less and less comfortable with this method of control. Don’t get me wrong, it works well but my preference remained with using a control stick because it felt more natural. I can see why some may find the 3DS method of control the better option with the benefit of two screens; however, the Switch version doesn’t make it an uncomfortable experience even if one finds the touchscreen option a little iffy.

Sushi Striker: The Way of Sushido surprised me in more ways than I could have imagined. A wacky concept that involves eating sushi and using plates as attacks may sound too oddball of an idea to take seriously for some, but the folks at indieszero found a way to keep me hooked with this puzzler. This game has both depth and balanced mechanics that surprised me every turn, while making me smile along with its silliness. It’s addictive and pick-up-and-play nature are the backbone to an otherwise well-made and charming title that one shouldn’t ignore.

As wacky and zany of a concept that Sushi Striker is at first glance, it’s surprisingly addictive puzzle mechanics and pick-up-and-play nature make for a well-made gem of a title that one shouldn’t ignore.