Swap Fire is an ambitious mix of first-person shooter, sport, and party game rolled into one. I really admire what this indie game is trying to achieve here, especially with its support for up to 5 players. That’s what makes it somewhat tough for me in reporting that I (and the PN contributors who also played it) found the overall experience fair at best. A few sizable oversights get the better of it. 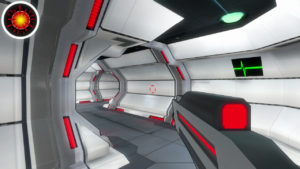 Note that with multiplayer as the “core mode”, Swap Fire offers a lighter package for the solo gamer. There is single player support, but action against the AI bots proves rather dull – I’ve found no options to adjust their skill level for instance. Grab a few friends to lessen the possibility of quickly growing bored. 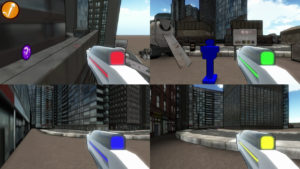 The game is innovative, but not intuitive. The PN team are a group of seasoned gamers, but if we had to sum up our early experiences in one word, the four of us unanimously say “confusing.” Jumping straight into multiplayer left us with the realization that we needed the tutorial to get a feel for the game’s swapping mechanic. Here, shooting leads to switching spots on the map which (when clicking) can definitely lead to some distinct and entertaining chaos! Yet, while the mechanics are broken down well, individually taking turns to work our way through the tutorial (just to wrap our heads around the basics) certainly didn’t appeal to us. The best multiplayer games have pick up and play setup – they might be tough to master, but they’re easy to learn. Amidst ambition, this key element seems to have taken a backseat. 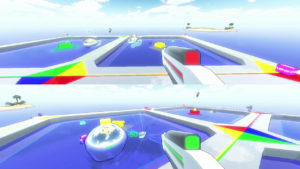 There’s variety amongst the nine modes, although it starts with the weaker Capture the Flag and King of the Hill. A soccer variant reminiscent of Blast Ball (but a bit better) rounds out the first cup. Sadly these are weighed down by a linear presentation. You must play the cups in order to unlock further modes by earning gold trophies. This initial restriction seems unnecessary. One way the game isn’t restrictive is controller options. The variety supported is welcomed, though the omission of the Nunchuck is an undeniable head-scratcher; it makes the Wiimote control harder, and definitely not the best fit for an impromptu group. 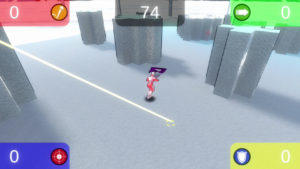 Aesthetically, the first-person visuals range from cool to on the simpler side (depending on the mode), yet are still rather encouraging to see from an indie. They mesh fine with the game’s overall atmosphere. The various camera display choices for the GamePad are commendable (it can also be used for commentary when playing with a full group). The voice acting in Swap Fire is … okay. Uneven quality aside, it’s inclusion a step beyond what I’d expect from most indies.

Swap Fire definitely has a unique feel; the Wii U isn’t flush with first-person games; even less from indies. Its E10+ rating also makes it a game most of the family could enjoy, which I’m in favor of. But for $14.99, I’d hope for more to keep solo players engaged – especially when the multiplayer setup proves unintuitive and restrictive. I feel there’s a very good game here, but it’s buried under a setup that’s just not very inviting for users picking the game up for the first time. Here’s hoping a sequel can bring some further polish to the swapping formula, and a focus on its stronger modes to reach an even broader audience.