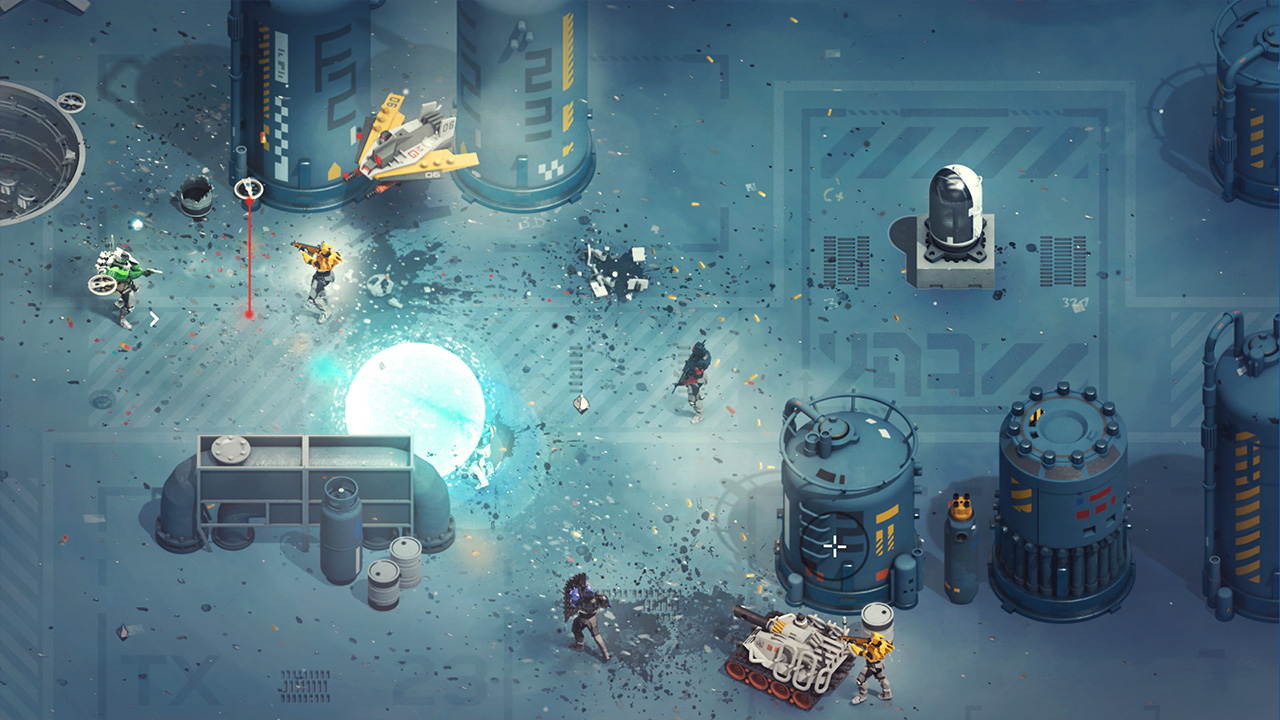 If you like running around shooting things, have got a game for you. SYNTHETIK: Ultimate offers several levels of shooting everything which moves, and trying to not die while doing it. There really isn’t much in the way of background or story line with this game, but do we really need a lot of narration?

Starting with the game’s appearance, we get a middling level of graphics sophistication. It’s not so grainy as to be considered pixel art, but it is not exactly a visually rich or intriguing 2D environment, either. Since this is more of an action game than a story game, there is not a lot of text to read. Even so, I would recommend playing this one on a TV because there are enough small details that it’s not well suited to handheld play. The visual themes are fairly standard and work well enough for what it is, and the effects—like rocket and bullet trails, explosions, and so on—are passable. 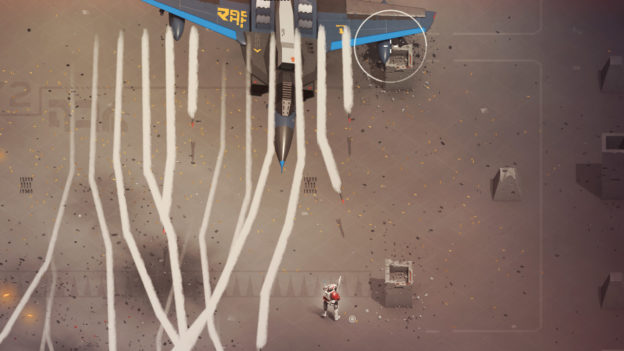 Since SYNTHETIK: Ultimate is about shooting stuff, let’s talk a bit about weapons. You have access to a rather long list of weapons. You don’t get them all at once, of course, and it could be argued that there are actually too many weapons on the list; once you see the list, I think you’ll get what I’m on about.

By the way, be careful with your ammo count and with the manual reload function. If you run out of rounds in the middle of a firefight, it could be a bad day for you. If you accidentally hit the reload button twice, you can lose a full clip and run out of ammo even faster. As far as the weapons go, mostly you get guns: pistols, rifles, shotguns, nail guns, etc.

There are also eight different character types, each with a different set of skills, weapons, and tactics you can employ to defeat the baddies. The good news is you have a variety of character types. The bad news is playing them all enough to get proficient with them and really level up can be a bit of a grind. Along with guns, you have spots in your inventory for other objects and for drugs. Yes, the game includes an element of self-medication to stave off pain and to reduce the effects of injury. 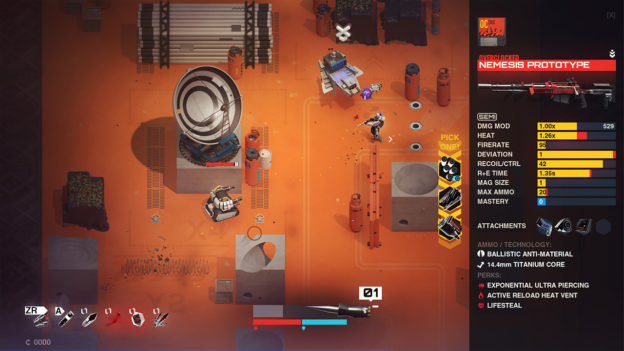 There are also three game modes you can play: Citadel (the main game goal), the Arena, and the Firing Range. Playing the Citadel involves going level by level through the game to reach the “top.” There, you have to defeat the ultimate bad guy to win the game. This is a pretty standard structure with the roguelike twist in that respawning and fighting a level again will mean a new set of bad guys, etc. In other words, this game is not just about memorizing patterns, you have to be adaptable (and a little caution helps, too). 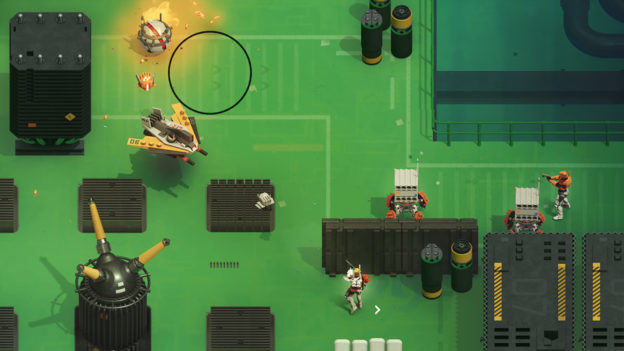 If you dip your toes in the Firing Range, be ready for some disappointment. It’s sort of a practice area, but don’t expect any tips on how to actually play the game. Don’t expect much in the way of objective explanation, either. While you are at it, continue to fail to expect how to do things like leave the Firing Range. This game doesn’t make the basics obvious, or even available for reference.

This Switch port also falls a bit short with the controls. The left Joy-Con is used to move your avatar around, and the right Joy-Con is used to change the direction in which your avatar is looking and aiming. This isn’t drastically different from other shooters, but the right Joy-Con targeting is a bit touchy and not very tight. The targeting reticle will slowly drift to a perfect headshot if it is generally proximal to a bad guy. If you are exposed, don’t expect the sight picture to resolve any faster, and, if you touch the right Joy-Con, the reticle will dutifully jump around with wild swings corresponding to the least little touch of the stick. This can be highly aggravating, but the added difficult can make for a more satisfying win.

Speaking of difficulty, you have some options here, as well. SYNTHETIK: Ultimate lets you set several difficulty factors. The more factors you leave on, the more difficult the game is to play and win, but it also gets you better gear/ammo drops and better points/rewards. If you like a challenge, play around with these settings, but be ready for things to get hard quickly. 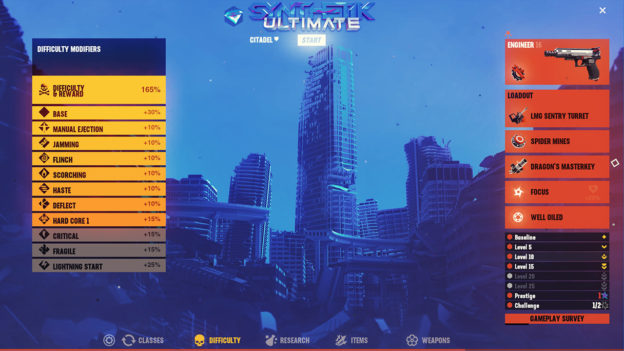 Unfortunately, the sum of these issues are annoying enough to cause a slight rating downgrade on the Switch. It’s still a solid game, but one you may enjoy more on your Windows PC (where it’s free to start, by the way).

SYNTHETIK: Ultimate provides a good old-fashioned shoot-’em-all with plenty of tactical difficulty. There are enough levels, avatar classes, and weapons to keep a gamer busy for a fair number of hours. The game could stand some controls and training improvement, but it is a worthy action/arcade entry.