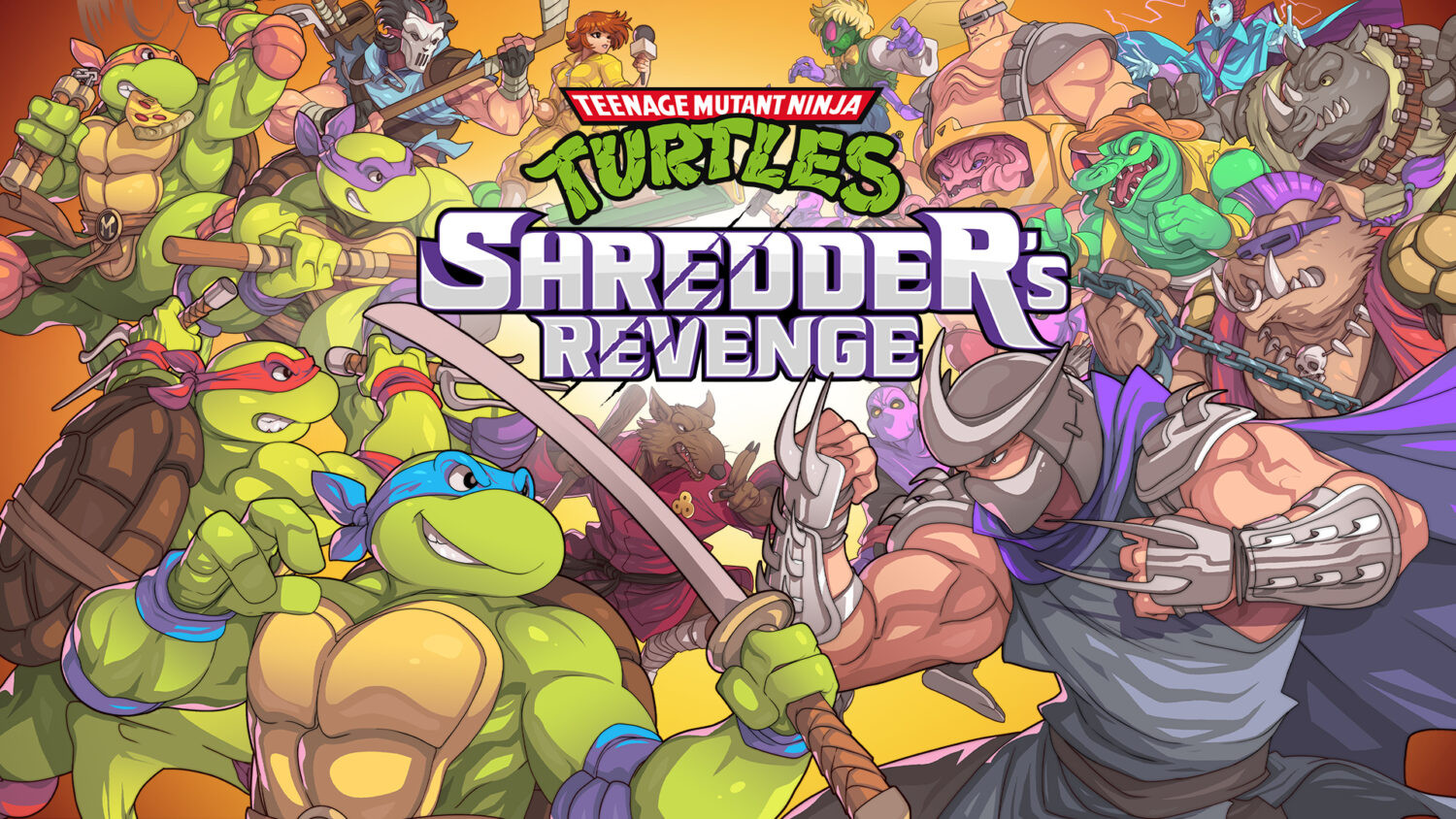 Cowabunga, dudes! Teenage Mutant Ninja Turtles: Shredder’s Revenge has arrived to bring its retro-inspired style to a Nintendo Switch near you. Announced in March 2021, this highly anticipated title sets to relive the golden age of gaming and pop culture inspired by four mutant turtles. Thankfully it successfully hits that nostalgic mark and even adds its own flavor to the series.

Shredder’s Revenge isn’t an origin story; it relies on players knowing that the turtles exist as crime-fighters in New York City. Instead, it drops us in on a typical day in the turtles’ lives as the awesome foursome prepare to stop Shredder and his cronies from abducting the Statue of Liberty. Although the story unfolds through cutscenes between levels, the plot itself doesn’t matter much, serving purely as the side dish for the main course of ninjarific gameplay.

If you’ve ever encountered a side-scrolling beat ’em up, you’ll instantly be familiar with the controls. You play as one of seven characters (more on that later), moving up, down, left, or right while hitting specific buttons to jump, attack, or perform special moves. There’s a handy tutorial when you load your first game – and, slightly annoyingly, when you load every subsequent game, though this can be skipped. Unfortunately, this video tutorial is more like an unplayable demo, showing the 21 possible moves without letting you practice them. It’s hard to take in this many moves at once, and a more useful tutorial interface could have worked better. It’s a minor quibble, though, and one of the few issues with this title. 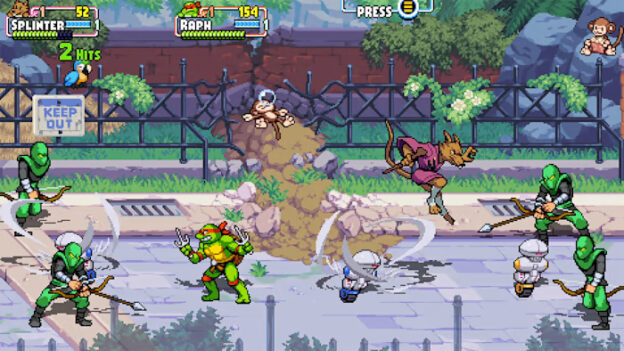 To realize why Shredder’s Revenge is a special moment in gaming, we need to revisit the origin of this pop culture phenomenon. If you’re unfamiliar with the history of the Teenage Mutant Ninja Turtles – more succinctly known as TMNT – here’s a quick lesson. What started as a black-and-white comic in the mid-1980s became a hit in the late ‘80s and early ‘90s thanks to a popular cartoon series, more comic books, live-action movies of varying success, and a plethora of toys and merchandise. Naturally, video games were also thrown into the mix. Although their overall popularity declined in the late ‘90s, the heroes have maintained a presence on television and in video games throughout the 2000s.

Having said that, there’s a stark difference between the turtles of yesteryear and those of the more modern Nickelodeon-era shows. Shredder’s Revenge seeks to recapture the essence of the original heroes with classic on-screen action that heavily relies on the look and feel of the 1987 animated series. It even brings back original cast members to add authenticity to the proceedings with their voice work. It’s executed very well, giving us a colorful visual adventure that feels like you’re playing through the show. Even the levels are called episodes, further heightening that television experience.

This leads me to one of the most fun aspects of playing for the first time: interacting with long-forgotten characters from TMNT’s history. You’ll probably have no trouble remembering the big baddies like Krang and Shredder, but what about Metalhead, General Traag, or Slash? Well, they’re all here! Even Tokka and Rahzar make an appearance. It’s super fun seeing them return in all their retro glory. 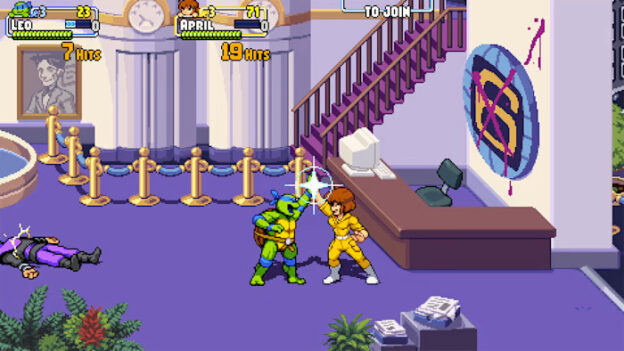 Then there are the turtles themselves. I probably don’t need to explain that the group consists of Leonardo, Raphael, Donatello, and Michaelangelo, each named after a famous artist. Everyone has their favorite turtle to use (mine’s Donatello for his long-reaching bo staff), but Shredder’s Revenge adds a few new characters to the roster. I say “new” but what I really mean is “newly playable”. These characters have been around as long as the shell-backed heroes but were previously unplayable in those arcade classics. Fans can now assume the role of ninja master Splinter, vigilante Casey Jones (unlockable after completing the story mode), and reporter April O’Neil. This adds a twist to the formula, one of a few additions that help Shredder’s Revenge become more than just a retro-inspired homage.

April O’Neil’s inclusion has divided some fans; she’s not traditionally billed as a fighter, particularly in the cartoon series on which this game is based. Playing as her in solo mode can feel contrary to the show’s roots, however she feels more at home as part of a multiplayer team. At the end of the day, she’s only one option. Each character plays a little differently, with stats depicting speed, power, and range. April is the weakest of the group, which is evident when using her. If anything, it gives players a chance to prove their prowess by completing the game with characters of all skill levels. More choice is ultimately a good thing. My only hope is that the roster is further expanded via future DLC.

I mentioned additions to the classic formula, which mosty extends to the game’s extras. I didn’t need much of an excuse to replay TMNT IV: Turtles in Time on the SNES back in the day; it was one of the most-played titles we owned, even without the incentive of achievements and collectibles, not to mention multiple endings and a leveling-up system. Shredder’s Revenge has these in spades, giving you many reasons to keep coming back. Add to that the sheer fun of multiplayer mode, both online or locally, and this is a game you’ll likely return to for some time. 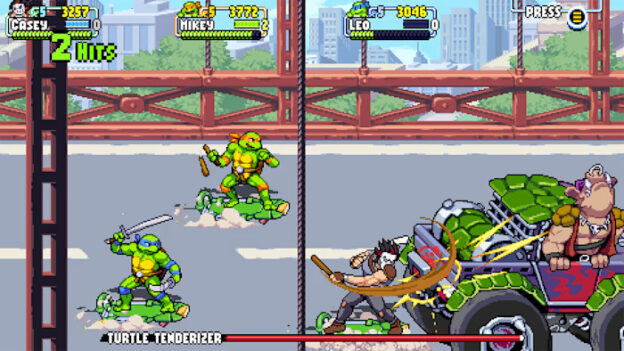 The online mode works well once you figure out how to get into it. There are two ways to go about it. Firstly, an obvious Party Mode feature allows you to invite or join friends at any point during the game. It’s clearly labeled and easy to use. If, however, you want to simply join a random assortment of players online, you’ll need to notice the option only visible at the bottom of the character-selection screen that helpfully says to press the L button to “find players”. It’s not intuitive at all and should probably have been made more obvious as part of an Online menu or additional option in Party Mode to keep all online features together. To stress this point, you must “invite” public players via that first Party Mode menu. Although the user interface isn’t well designed, it’s simple once you know how it works. And it’s worth it; I loved it when random turtles popped up to join my session after a global invitation.

The other issue I experienced was a series of glitches. These were mostly temporary, like being stuck in mid-air during a level until I was hit by something. One of my online companions found themselves stuck next to a wall and had to drop out. There was also one incident when my game completely crashed and needed to be restarted, but my progress was saved up to the previous level I’d completed. That won’t be the case with Arcade mode though, which is a harder version of Story mode using a single playthrough with no saves and limited lives. Thankfully, I made it through that mode without incident, but it’s something to be aware of and is hopefully an issue that’s addressed in a future update.

Teenage Mutant Ninja Turtles: Shredder’s Revenge hits that nostalgic sweet spot while offering something new and challenging. There may be a few glitches and interface issues, but the gameplay is super fun, particularly in multiplayer mode. Fans should be playing this game right now.