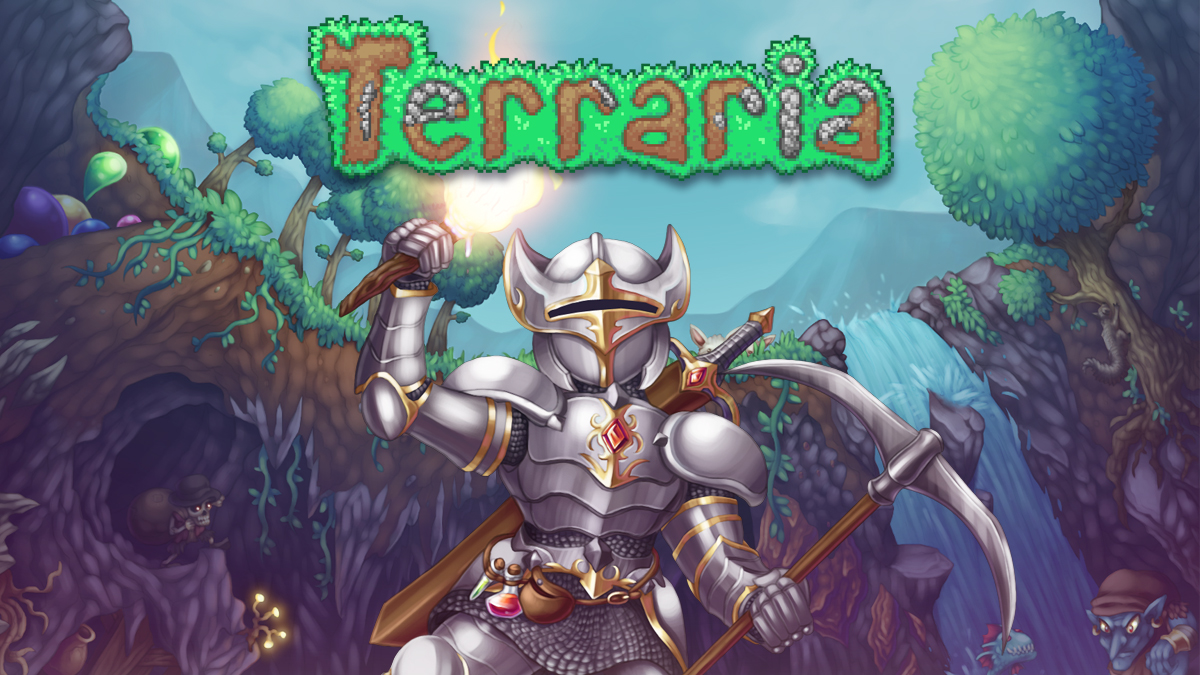 Terraria—an action/adventure sandbox game originally developed by Re-Logic—has been floating around the gaming world since its initial release for Windows PC back in 2011. It’s been made available for just about every gaming platform of worth since then, including the Nintendo 3DS and Wii U. It’s now out for the Nintendo Switch, giving Terrarians the opportunity to explore, build and fight at home and on the go. But does it work both ways on one system?

Terraria places gamers in a 2D gaming world that’s procedurally generated each time you start a new round. The world is sized to your choosing, providing you some control over the length of your exploration session. No matter which you choose, survival is difficult from the onset. You’re presented only with a pickaxe, sword, and ax, and must immediately begin to defend yourself from the game’s numerous enemies. This means creating a shelter for protection before nightfall, but you can only do that by braving the harsh world to gather resources. 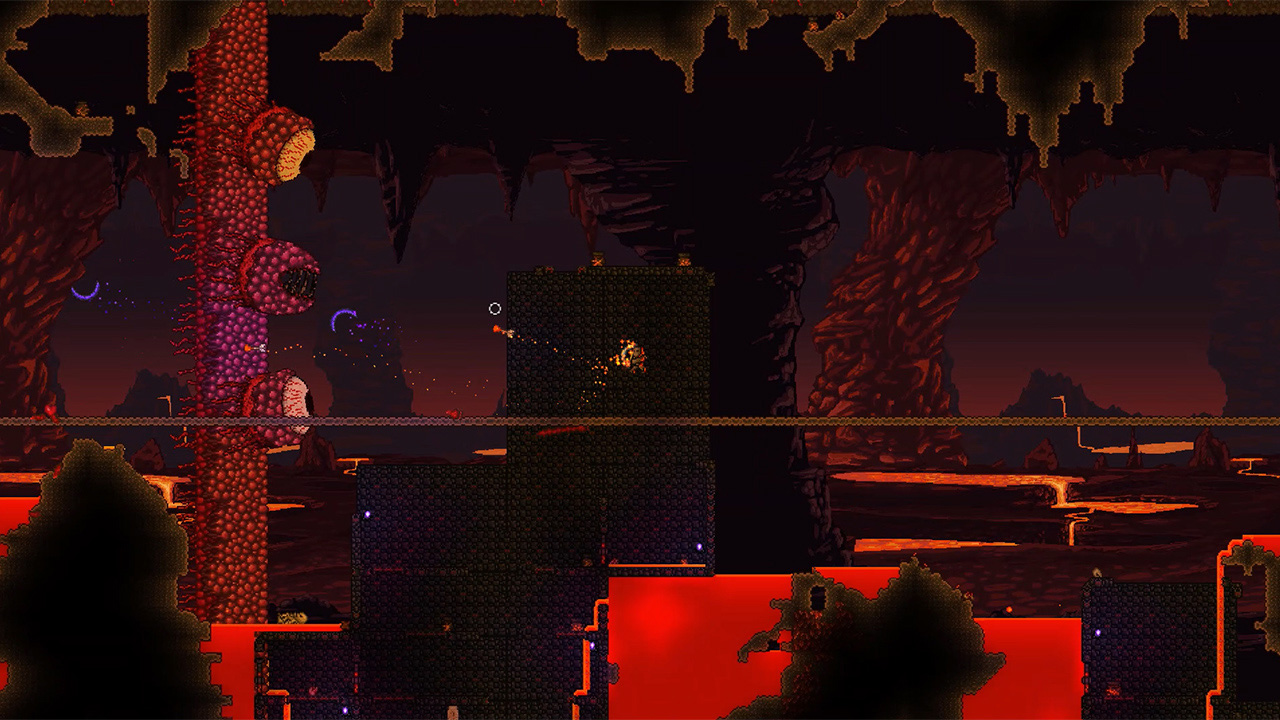 The game settles down a bit once you’re able to build a house and crafting table, the latter of which is used to prepare armor and weapons so you can venture further (and deeper!) from your starting point. That alone is the incentive for playing, as there’s little narrative to keep you going in Terraria. You either want to keep exploring, building, and fighting, or you don’t.

Thankfully, even if the core gameplay wasn’t addictive enough to carry you through (and it is), Terraria gives you plenty of other elements to keep things interesting. You can, for example, engage in the occasional boss battle to acquire rare items and in-game currency, and I was surprised by just how varied the bosses can be; you can’t expect to beat them all the same way. 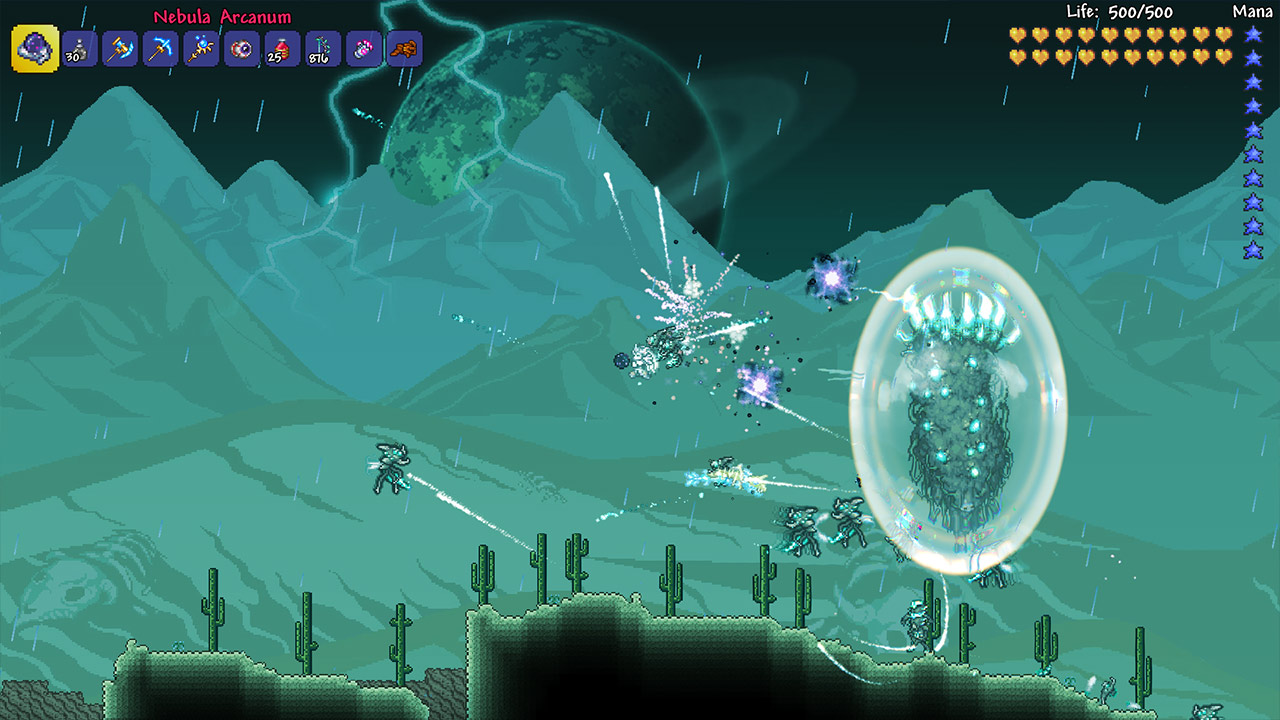 Bosses are also used as one of the methods to make sure you don’t just wander aimlessly through the game. Terraria gives you goals to reach, and those goals often are rewarded with various NPCs who will come to live in your house and help you along your way. There are even ongoing events in which you can participate if you’re willing to join the community. That’s not to say, however, that you have to aspire towards this. You’re welcome to simply craft and build on your own if you like, exploring no further than necessary to get the materials you need. Terraria plays the way you want it to, allowing you to keep things close to home even while providing a huge open, 2D world to explore. 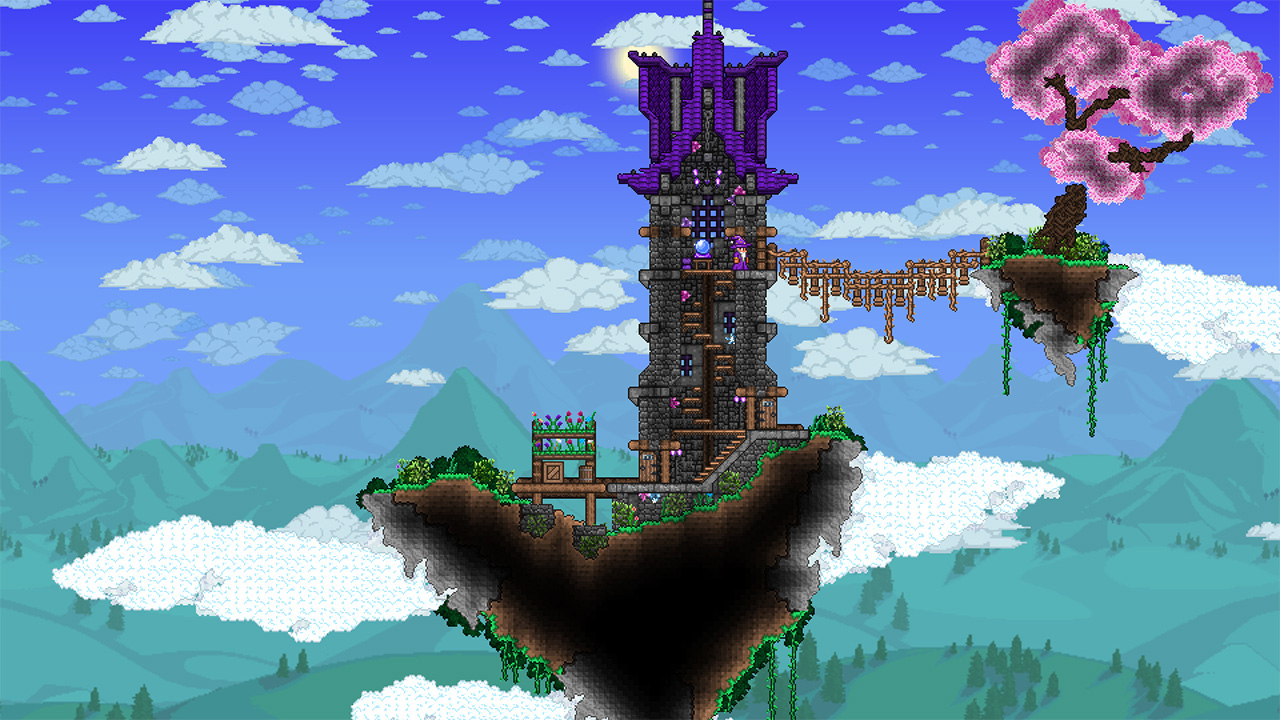 This is good because you pretty much have to take things one step at a time in order to succeed. Tear off on your adventure all old-school arcade-style and Terraria will bring you to a swift end. And because there are little to no in-game instructions, that’s a lesson I had to learn the hard way. Terraria doesn’t hold your hand or nurture you, it just plops you in its colorful, retro-graphics world and turns its back, only to return to occasionally dump something like a Martian invasion on you.

Chances are, however, that most of you already know this; you’ve played Terraria on the Wii U or iPad, and you just want to know if it’s worth double-dipping on the Switch. Honestly, that depends upon how much you like playing the game…alone. Currently, Terraria offers multiplayer only in online mode through a Nintendo Online account. The developers have promised local co-op in a future patch, but we have no timeline for when that will be released. Considering it was already available on the Wii U, it’s a curious omission, to say the least. 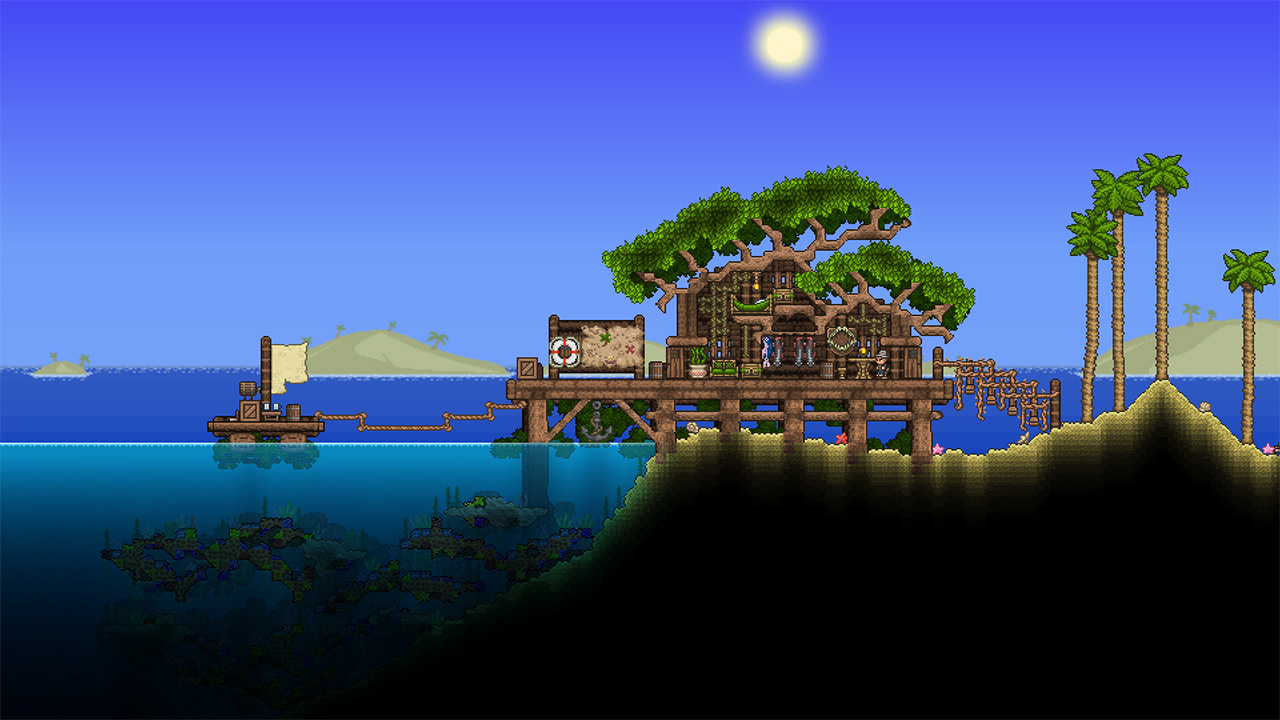 It also depends upon how you prefer to play the game. In docked mode, the touchy controls are somewhat difficult to grasp. Movement and combat are fine, but using the R stick to make your menu selections is more cumbersome than it need be. This is exacerbated by the fact that the game keeps moving while you’re making your selections.

Portable mode does give you touchscreen functionality, but the menu items and text are tiny, making them quite difficult to read and select. Thankfully, you can zoom in to alleviate some of this.

As far as Nintendo compatibility goes, then, the Switch version of Terraria falls somewhere between the Wii U and DS versions, and none of them have ever been the best way to play it. The game is just easier to handle on your Mac/PC or iOS device, where the prices are currently $10 and $5, respectively. As such, the $30 asking price on the Switch negates the “two-ways-to-play” perk considering you can buy it for your computer and iPad for half the price of the Switch version.

That Terraria continues to receive ports to new systems is a testament to the game’s playability. It continues to attract new fans while prompting long-time players to double- and even triple-dip. I don’t think you need the Switch version if you’re already set up on your other gaming system(s) of preference (especially at the current price). If the Switch is your only option, however, it’s good enough for us to offer a recommendation. Let’s just hope the developers manage to dig up and build couch co-op before night falls again.