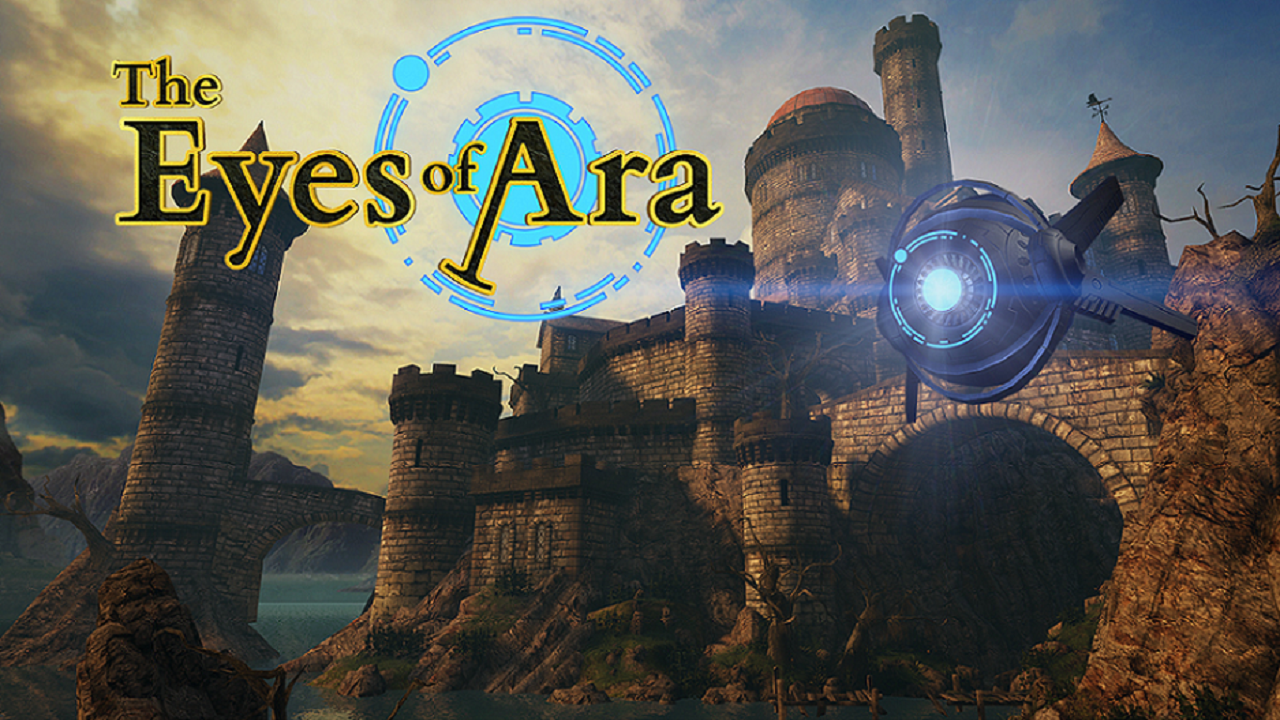 If this review were based upon the first two-thirds of the game, The Eyes of Ara would be flirting with a 10. Sadly, it becomes far too complex for its own good during the home stretch. Sizable balancing issues notwithstanding, there is still a good game here for graphic adventure fans like myself, one that I suspect will linger in my memory.

Played from a first-person perspective, The Eyes of Ara draws inspiration from Myst, a classic that’s also heading to the Nintendo Switch (realMyst via Limited Run Games). While The Eyes of Ara is much more contained than Myst – you’re exploring a single castle – it still manages to feel unique in its own way. The castle has such a highly-detailed appearance that it’s easy to believe a family once lived there. This helps the mystery and setting form an organic whole,  thus making the atmosphere a genuinely alluring one.

This game also feels less lonely than Myst, thanks to the near-constant presence of glowing mechanical critters. While The Eyes of Ara tries to set up some sort of ghost tale at the start, it’s quickly apparent that the townsfolk are giving way to fantasy rumors. Something machinelike (and possibly alien) is disrupting broadcast signals, and you’re the technician brave enough to find out the real reason why.

This game controls well, both in docked and handheld mode. The former might be preferable, as a large TV can really help you pick up on small details. That said, the handheld controls are more intuitive, though not necessarily quicker once you get the hang of the Joy-Cons. A setting to lower the pointer sensitivity is much appreciated, as is the one that lets you up the brightness.

Puzzles are plentiful in The Eyes of Ara, and the early goings are (by and large) linear to ease you in before opening up more. For the most part, the puzzles successfully kept us in their grip. Yes, even though it’s a one-player game, my wife played alongside me. I appreciated another set of eyes on the various puzzles, and it was fun having someone to share the “aha” moments.

Besides the main puzzles, The Eyes of Ara has plenty of optional collectables. These are nice enough, while not seeming to serve much of a purpose. Some of the puzzles to find these extras we found more challenging than the main ones! Still, you’ll likely find a bunch since the castle is intriguing and fun to explore. The art direction is detailed and stylish, with plenty to stimulate as you comb every corner.

So for such a high-quality offering that impresses with its atmosphere, controls, settings, aesthetics, puzzles, and more, what’s my issue? It’s the frustration that stems from seeing this game start to crumble during its climax. The Eyes of Ara loses its sense of balance partway through its final chapter.

In the context of the game, having solved so many puzzles already, your character should be smart enough so that the challenge ramps gradually. But near the end, the difficulty turns into a jarringly steep ramp. The game overwhelms the player with too much freedom and too little direction to accompany it. Things become monotonous and unstimulating when you’re forced to backtrack, wandering the same areas over and over wondering what was missed. “I found all of these clues, but where are the puzzles they go to?” and vice versa. It makes the challenge develop into something less rewarding, more tedious. The incessant puzzles started to be solved, not so much by genre experience and observation, but more by a walkthrough.

I’m not sure why this happened. It’s possible the developer, knowing his game inside and out, did this in an attempt to make the game even more difficult. More likely, it was done because it’s just easier to dump everything on the player rather than dole it out in a thoughtful fashion. Expect your inventory to be crowded with book entries, clues, and notes. It’s a cut corners move in a game that otherwise reflects a lot of time and care.

Still, there’s no question The Eyes of Ara offers good value. We clocked over 15 hours playing at a leisurely pace. Depending on your patience with the puzzles and desire to explore, several more hours could be added still. It’s launching at $14.99, the same price as on Steam – no “Switch Tax”.

While a great game at heart, The Eyes of Ara has too many third-act issues for me to give a broad recommendation. Nonetheless, this is still a good release, skillfully crafted with attention to detail. For genre enthusiasts, I might even say The Eyes of Ara is a great release. Just be prepared for a daunting challenge as you near the end, likely with a walkthrough on hand.

While a great game at heart, The Eyes of Ara has too many third-act issues for me to give a broad recommendation. Nonetheless, this is still a good release, skillfully crafted with attention to detail. For genre enthusiasts, I might even say The Eyes of Ara is a great release. Just be prepared for a daunting challenge as you near the end, likely with a walkthrough on hand.