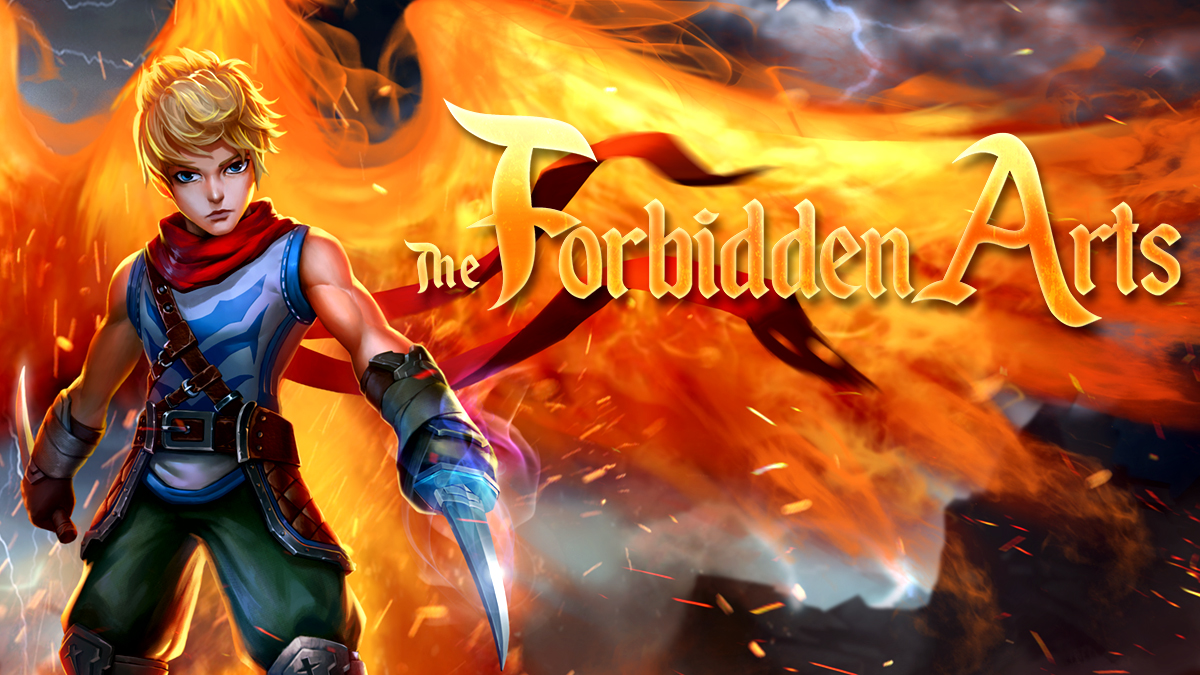 Further proof that it's fun to play with fire. 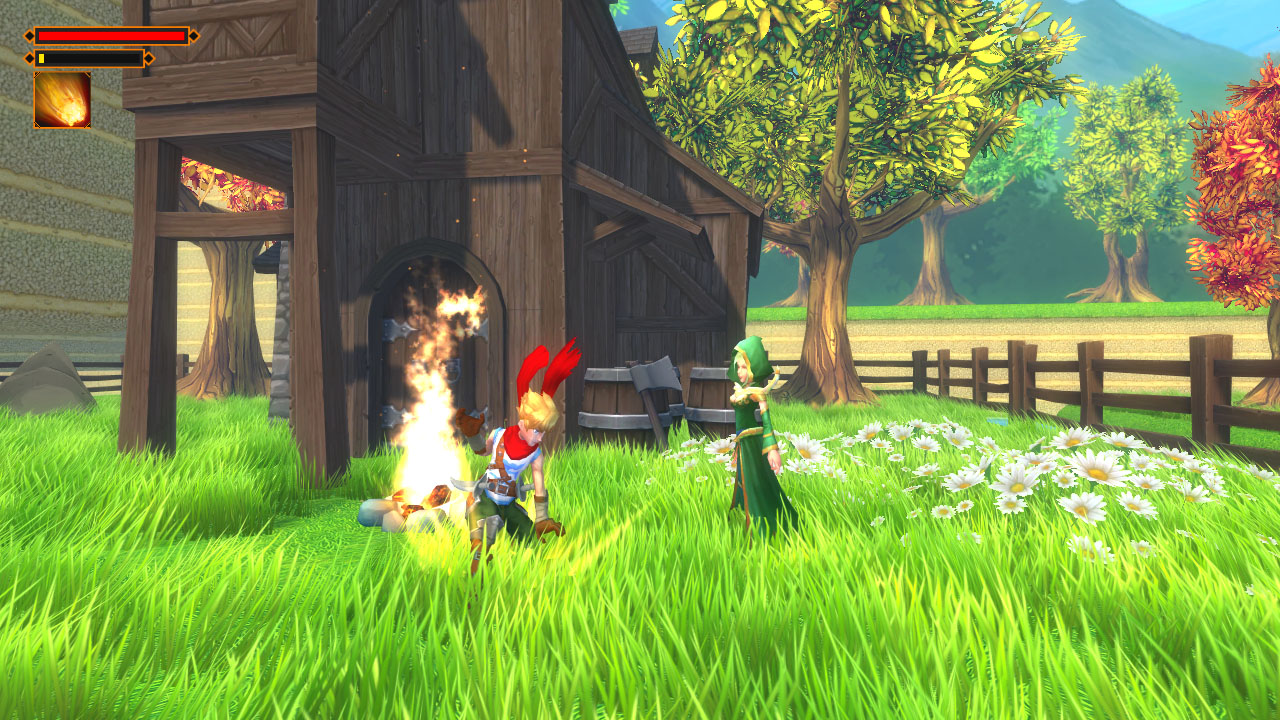 As the game starts, you wake up in a world is colorful and bright, the grass is waving in the breeze, and the sun is shining in the sky—it all looks like a pleasant summer day. The level of detail isn’t photorealistic, but it is clean and smooth. The way your avatar moves is well done, but some of the monsters are a little clunky (you’ll see what I mean when you encounter a bear). It isn’t bad, just not as smooth as you might expect from the rest of the looks of the game. As for the audio, the background music is actually very nice and complements the mood. The sound effects are good but at times are repetitive. It’s a bit like the old Kung Fu movies with only two sounds used for all weapons clanging; you notice it, but it isn’t distracting.

Let’s take a look at the tutorial next, as this game needed one. There is a menu option to see the settings at the beginning of the game, but there was no good explanation of the controls. Some are intuitive (joystick to run left or right, ABXY buttons to jump, attack, etc.), but the non-intuitive control is ZL for crouch. I hit the left joystick “down” a few times thinking that would make Phoenix duck (no bird pun intended…), but he just stood there, took a hit from a dark elf, and died. It would also help to know there are some areas where you have real 3D roaming capability. Don’t forget to use the right joystick to change the camera angle to get a good look around (to wit, to look for gold in clever hiding spots). 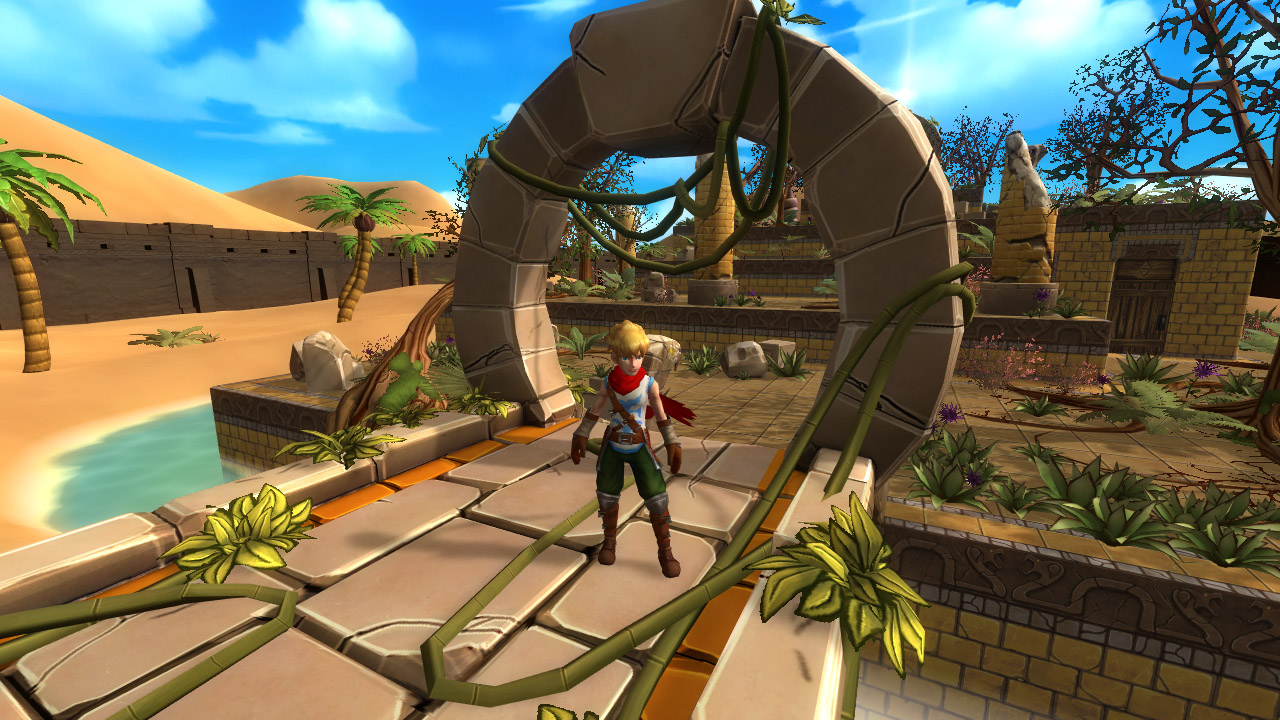 As for gameplay, The Forbidden Arts is a straightforward platformer. You will be doing a lot of running, jumping, climbing, ducking, rolling, stabbing, and throwing—and that’s just to start. About the jumping and wall climbing, there are several spots where these are a wee bit more finicky than your usual platformer and lead to some frustration, especially when the only way is up and the gymnastics required to get to the top are so particular in their execution. Given the nature of the game, this is not totally unexpected or even aggravating, it’s just part of the nature of things. 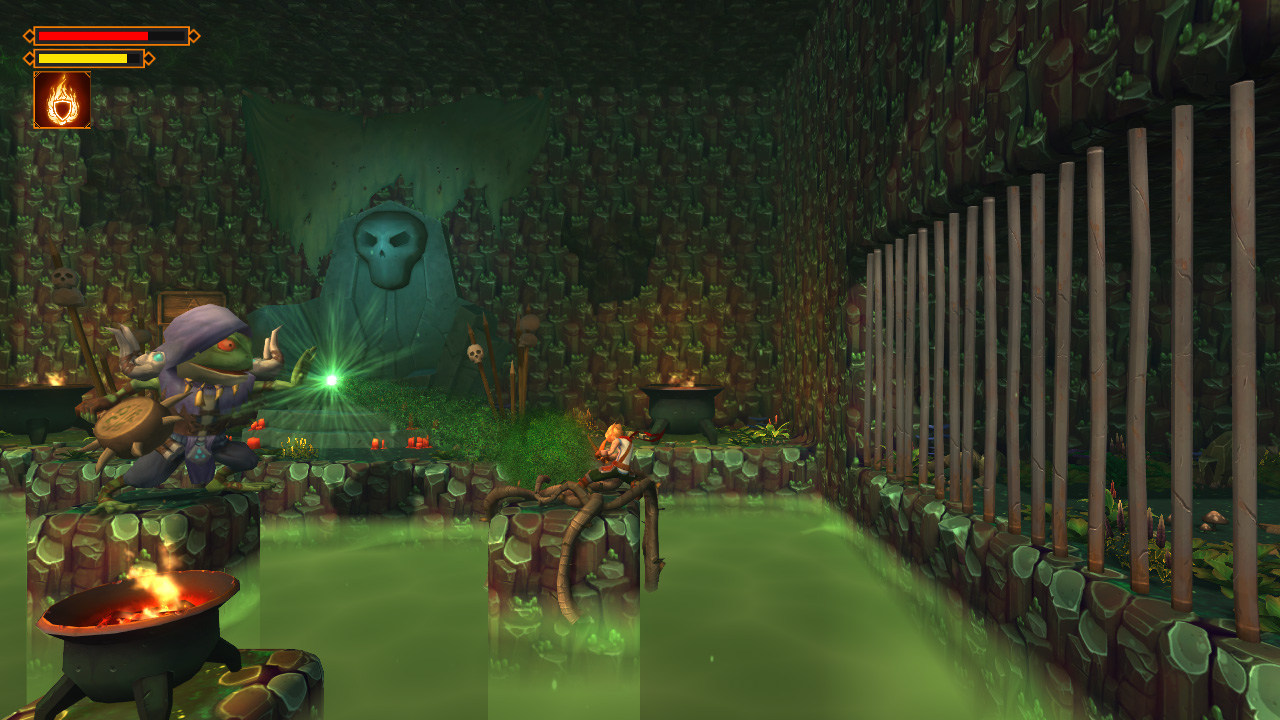 Along the way, keep your eyes open for out of the way spots; there is often a gold block hidden in areas like that. If you collect enough of the gold blocks you can use them to have ancient temple ruins restored to a usable condition. As these shrine sites are rebuilt you can use them as teleport sites to travel around faster. Speaking of “out of the way spots,” the game gives you a small map in the upper right corner of the screen. It doesn’t show you a lot more than you can already see, but it does go far enough to let you know you are near a hard to reach chamber a level below you, or an uninteresting plateau just ahead. These are likely spots for the gold blocks to be hidden.

By the way, as you run and jump around, look out for the instakill pitfalls; there are plenty of places where the fall doesn’t end and you die, there are spiky vines filling the pit and you die, there are spikes which pop out of the wall you are climbing and you die, and so on. Thankfully, the game has a good auto-save frequency and you have unlimited lives to restart sections and try again. When you do respawn, you come back with full health and full mana so all it really costs is time.

Keep an eye on your mana indicatory. You only get a few fireball attacks before you are out. To recharge, all you need to do is be near a fire and press the ZR button. The fires are dotted around frequently enough to be convenient, but not overly easy. The fireball attack is cool but may not be as effective on all enemies as you might want. There are some baddies which will die with one hit, but there are others who don’t even seem to be fazed by it. Keep your daggers handy. 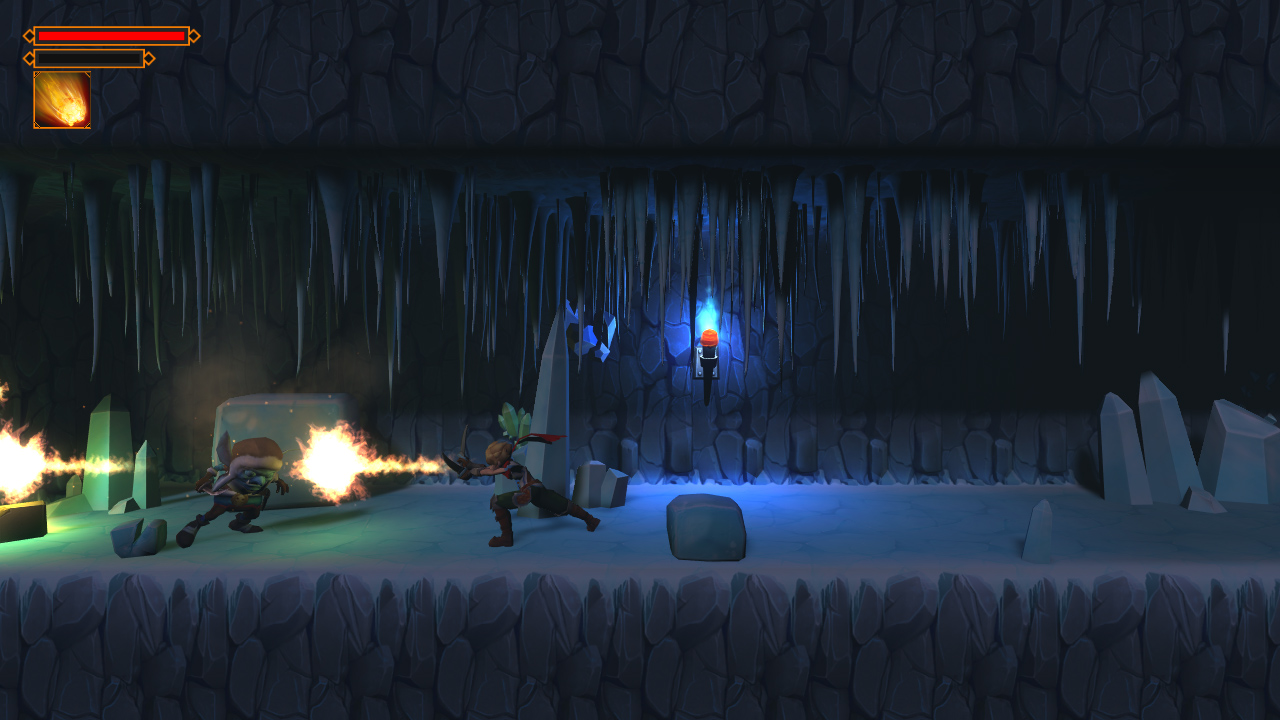 Speaking of attacks, be ready for a nasty surprise when you encounter the dark elves. I don’t want to give anything away, just be alert (because the world needs more “lerts”). There is a relatively easy way to counter these bad guys but it might not be the first thing you consider when you come across one.

The game does have a decent level of dialog, so you get some story without having to wait too long to get down to stabbing things. The village areas and campsites are relatively devoid of NPCs, so the world feels a bit empty. There are some NPCs with whom you must interact before the game will let you proceed, but they usually have vital information for you so no real problem there. There are bosses at the end of stages and there are puzzles to solve along the way—all the elements of a good platformer are here.

The Forbidden Arts is a nice indie studio entry for the Switch and good for at least 12 hours of gameplay. I say “at least” because if you play like me you will probably get a couple of extra hours out of it (refer to the finicky jumping bits above). It doesn’t have all the polish of a big studio game, but it has heart.