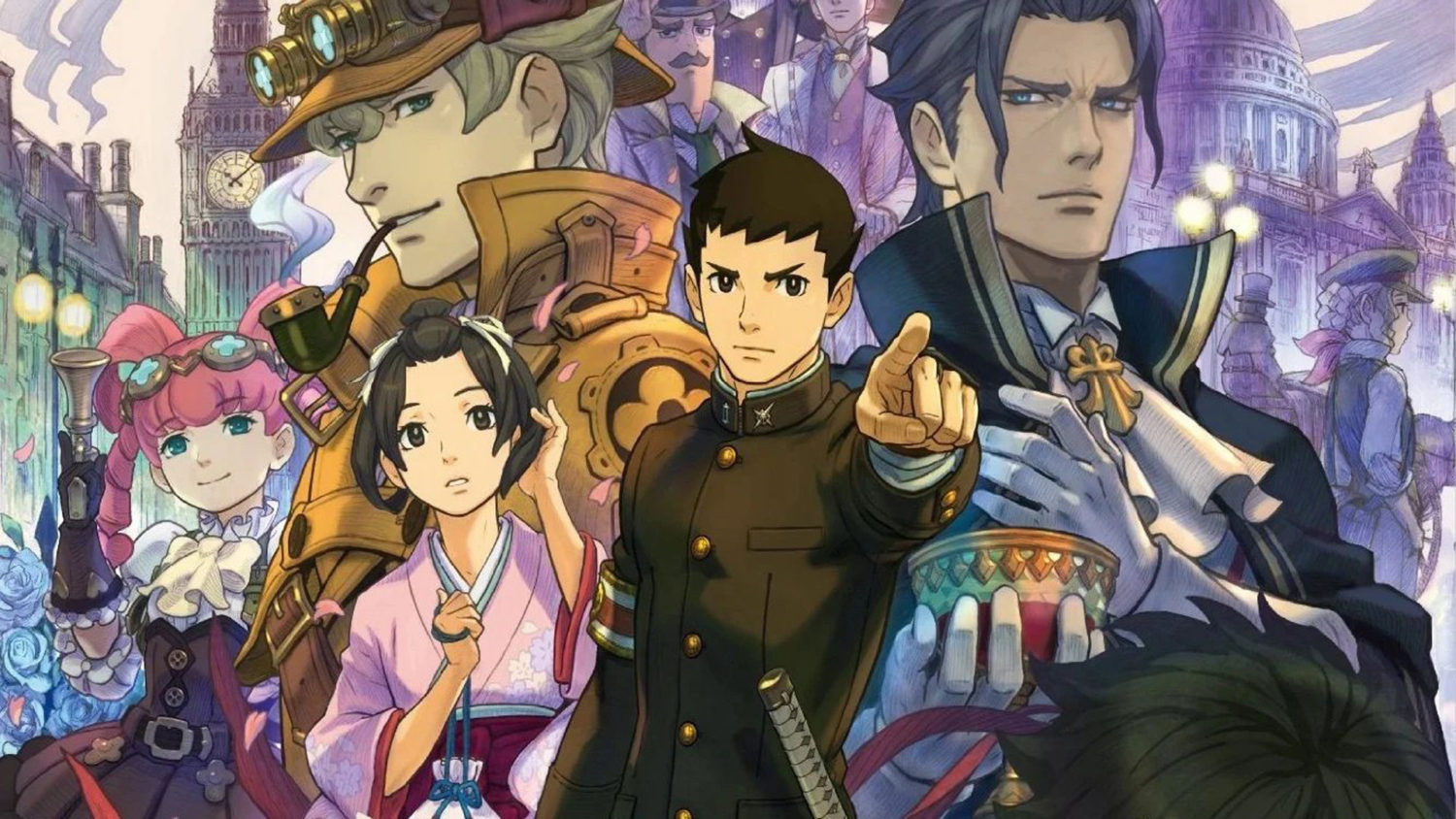 I can’t imagine there are many Nintendo gamers out there who haven’t played at least one Ace Attorney game. The series has been popular since Capcom first released Phoenix Wright: Ace Attorney for the Game Boy Advance in 2001, and has grown to involve many different central characters and even crossovers.

The latest release is The Great Ace Attorney Chronicles. It continues the visual novel approach in which you play as a defense lawyer who must solve cases in order to exonerate your clients. The cases, just like in the previous games, are filled with twists and turns, as well as funny moments, making sure all that reading never gets boring. 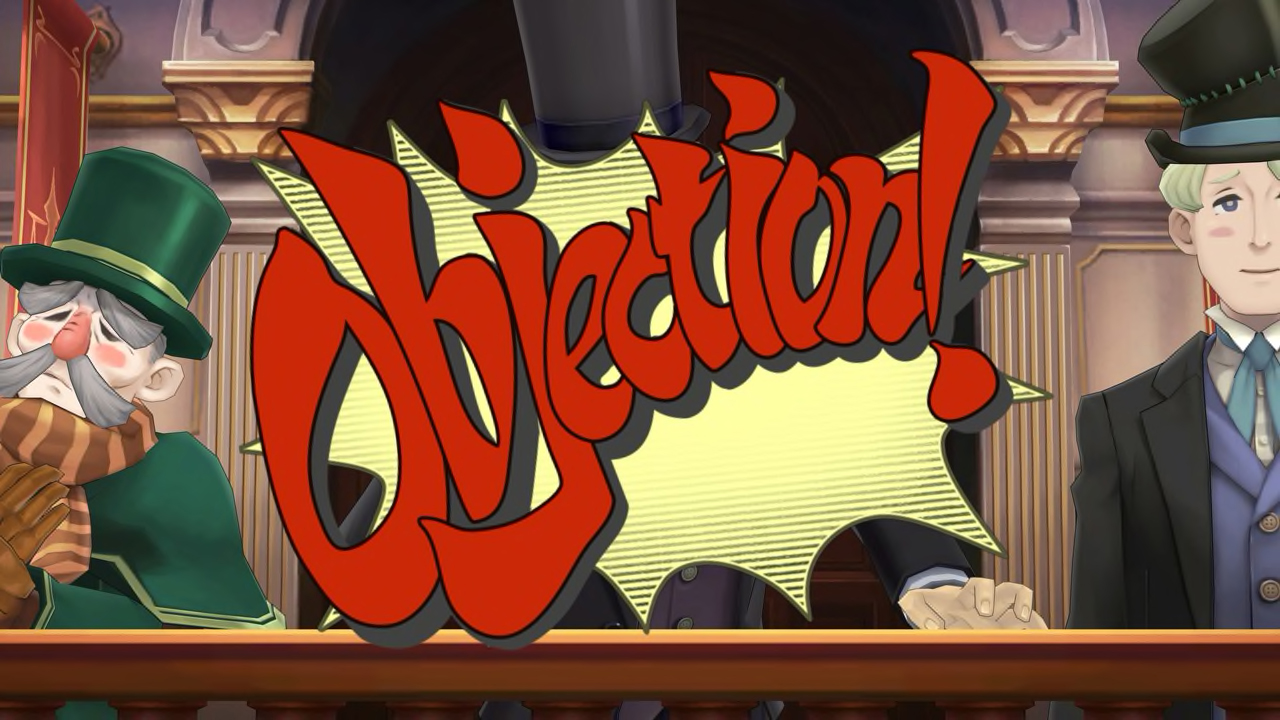 You will be filled with information before and during each case, and given time to investigate the crime scene and other key locations. Of course, you’ll have many conversations with the accused, as well as with your partners, detectives, the prosecution, and even a jury (more on that in a bit).

The adventure begins in 19th-century Japan. You play as Ryunosuke Naruhodo—an ancestor of Phoenix Wright who finds himself accused of a murder he can’t explain. Luckily for Ryunosuke, he’s a law student. And with the help of his friend Kazuma (and his own detective skills), he’s able to defend himself. Quickly after this case is over, he leaves Japan and sails to Britain on a study tour. On the way, however, Ryunosuke is accused of yet another murder, which you will help solve. 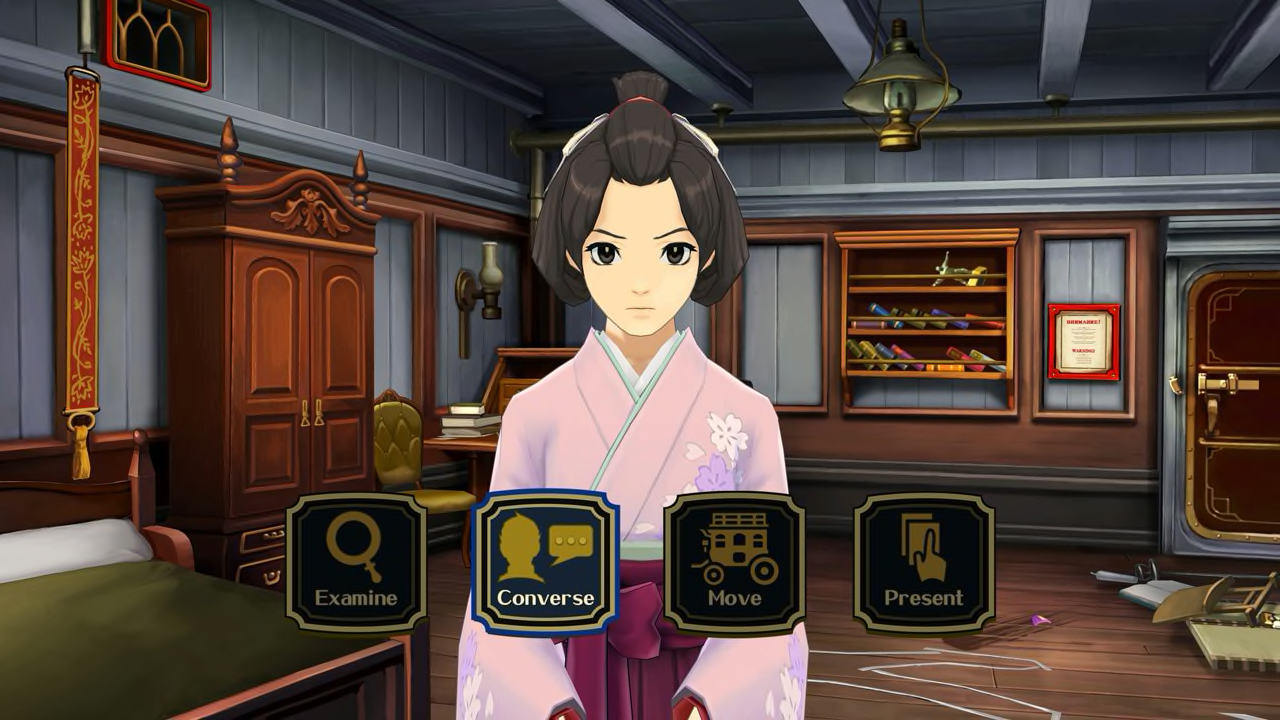 This time, however, you have the help of the wonderfully eccentric Herlock Sholmes. You will meet many new characters like Sholmes and his plucky assistant Wilson on your journey, most of whom share over-the-top and funny personalities. When working with Sholmes, you will discover that he’s not the best at his job (which isn’t very surprising), and you will have to help him fix his famous deductions, and set his story straight.

This is actually one of the clever, new gameplay elements in The Great Ace Attorney Chronicles. When Sholmes makes his deductions, he’s usually just “kind of” right. It’ll be up to you to guide him towards what he meant to say, at which point he’ll take the correct analysis and run with it. 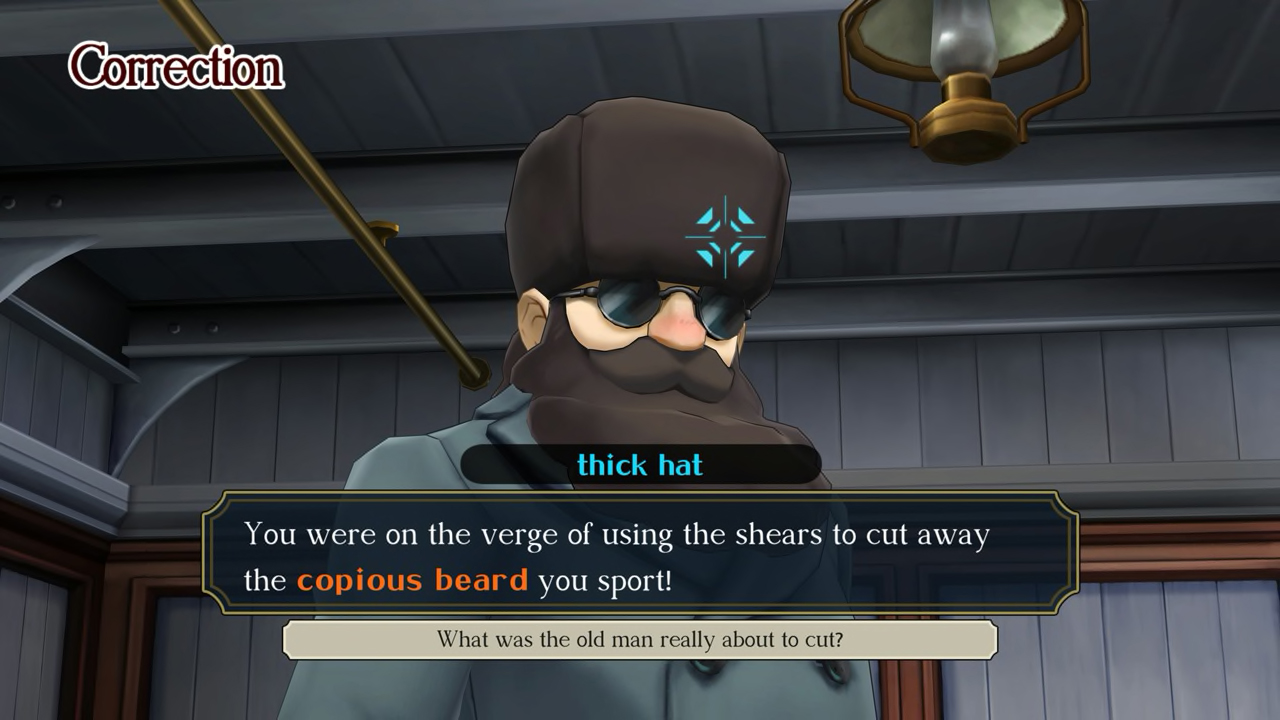 These scenes are slickly choreographed and are a lot of fun to play through.

When in the courtroom however, your job is to defend the accused by pressing witness statements, finding holes in their stories, and presenting evidence to prove their mistakes, as franchise fans would expect. The courtroom elements stay true to the original games, but when you make it to London, you will find that there is now a jury. It’s up to you to persuade them to believe the accused is innocent. Their opinions will change as they cases play out, and it’s your job to find contradictions in their inerpretations to turn them against each other and weaken their resolve.

Another new element requires you to watch for reactions from witnesses when there are more than one. Occasionally, a comment from one witness will invoke a noticeable response from another, and you’ll need to press that witness to determine why. The game makes these hard to miss, and, like in previous games, you can often repeat witness statements as many times as necessary in order to make the move that furthers the story. Of course, if you make the wrong decision, it does still count against you. Too many mistakes, and you lose. 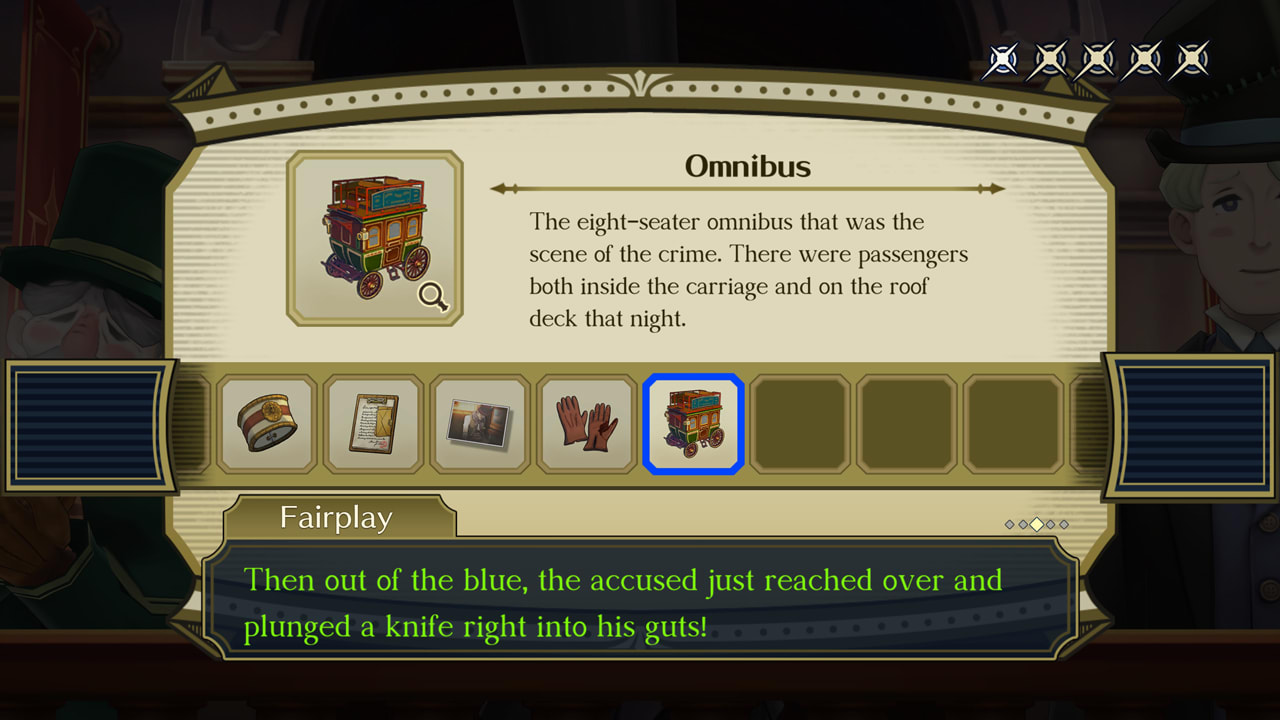 With lots to do in this game, the controls for it all are pretty basic. If you ever get confused on which button to press, or just happen to forget, the controls are almost always shown at the bottom of the screen to help remind you. And for scenes where there is a lot of dialogue, autoplay is an option so you don’t have to repeatedly press A.

In fact, if you want to, you can go through the whole game without having to actually play it. There’s an option in which the puzzles are solved for you, so you can just sit back and watch. That’ll ruin a lot of the fun, of course, and you’ll miss the comedy of getting things wrong, but the writing here is strong enough that the experience still holds up well with the gameplay elements removed. (The numerous film and stage adaptations of Ace Attorney games will attest to that.)

The visuals and animations in The Great Ace Attorney Chronicles are really nice when compared to previous games, right down to the ridiculous poses the characters get to reflect their personalities. 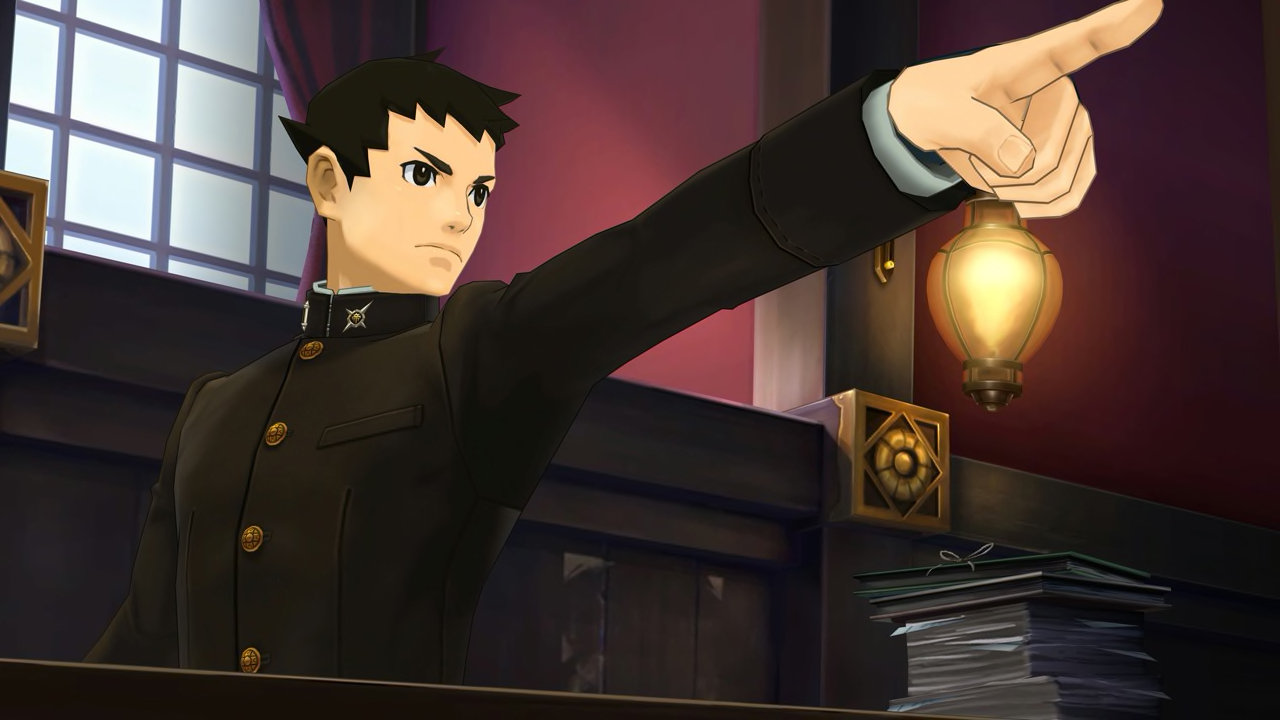 Most are pretty funny and add a lot to the story, making the game more fun to watch. I laughed out loud at many of the moments when Ryunosuke finally cracks a witness.

The settings and backgrounds are also nice to look at. Some are super cool, like a building that seems to be the inside of a clock. The brief animations between chapters are animated pretty nicely, too. However, the audio for these movies are a little strange, as Ryunosuke’s voice has a British accent even though he’s Japanese. The music is nice, though. It doesn’t distract from the necessary reading, and does a great job of building tension at the appropriate times.

Some of the drawbacks from previous games remain, but they’re all pretty minor. Missing a bit of evidence at any of the locations can prevent you from moving forward. This leads to repetition as you try to figure out where to go and what to do. Also, you may know what to present as evidence at a certain moment, but you could get punished if you haven’t completely examined the evidence first. The game doesn’t like for you to get ahead of it, meaning you’ll sometimes be waiting for it to catch up. Finally, you’re occasionally tasked with preventing evidence or making accusations based on hunches. These moments work within the story, but it’s sometimes hard to guess where the game wants you to go. 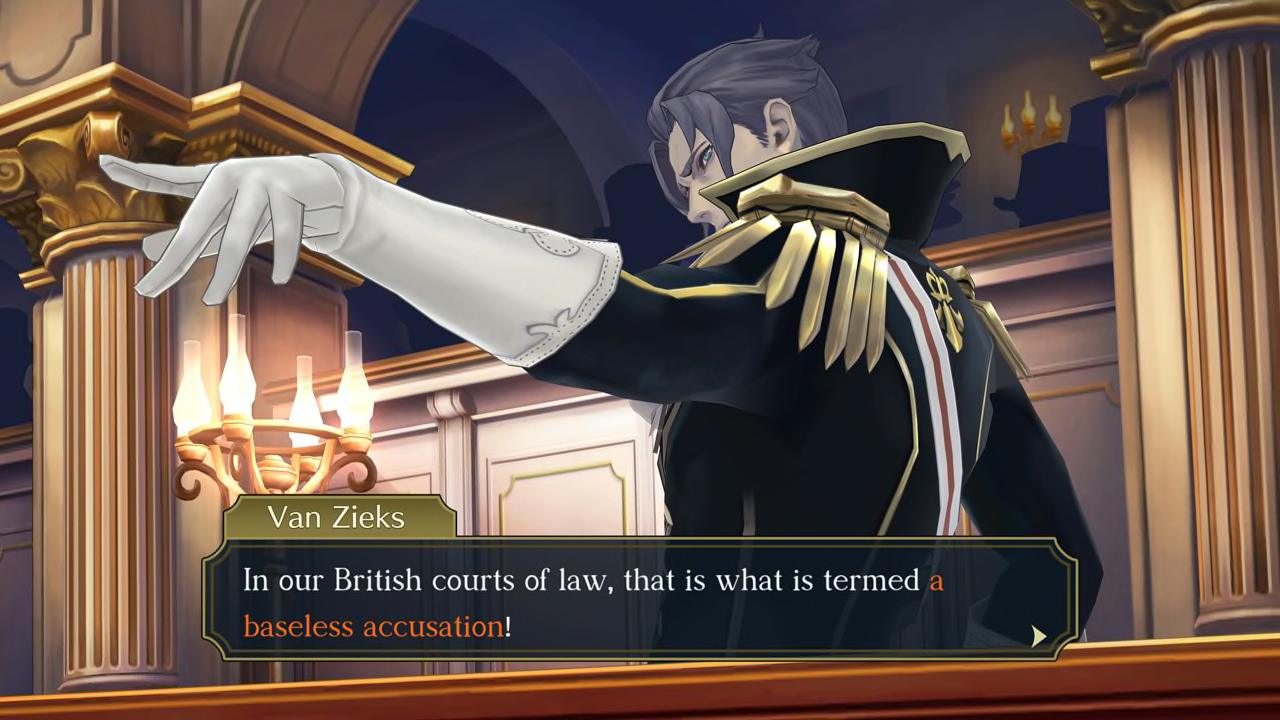 Even with these gripes, The Great Ace Attorney Chronicles is a wonderful game that will win over adventure/puzzle and visual novel fans with its humor, quirkiness, and genuinely tense moments. The story also grows in clever ways; what may have seem like insignificant moments and characters often coming back to play major roles in the many twists you’ll encounter. And now that it can be played on your TV, you have the option to make a family movie night (or, more accurately, nights) out of it. Who could object to that?

The Great Ace Attorney Chronicles is a wonderful package that will provide plenty of laughs and thrills for fans of mysteries, adventures, and visual novels. The situations and scenes make a successful leap to the big screen, and there are enough new gameplay elements to engage longtime fans without making them miss their favorite characters from previous Ace Attorney games.