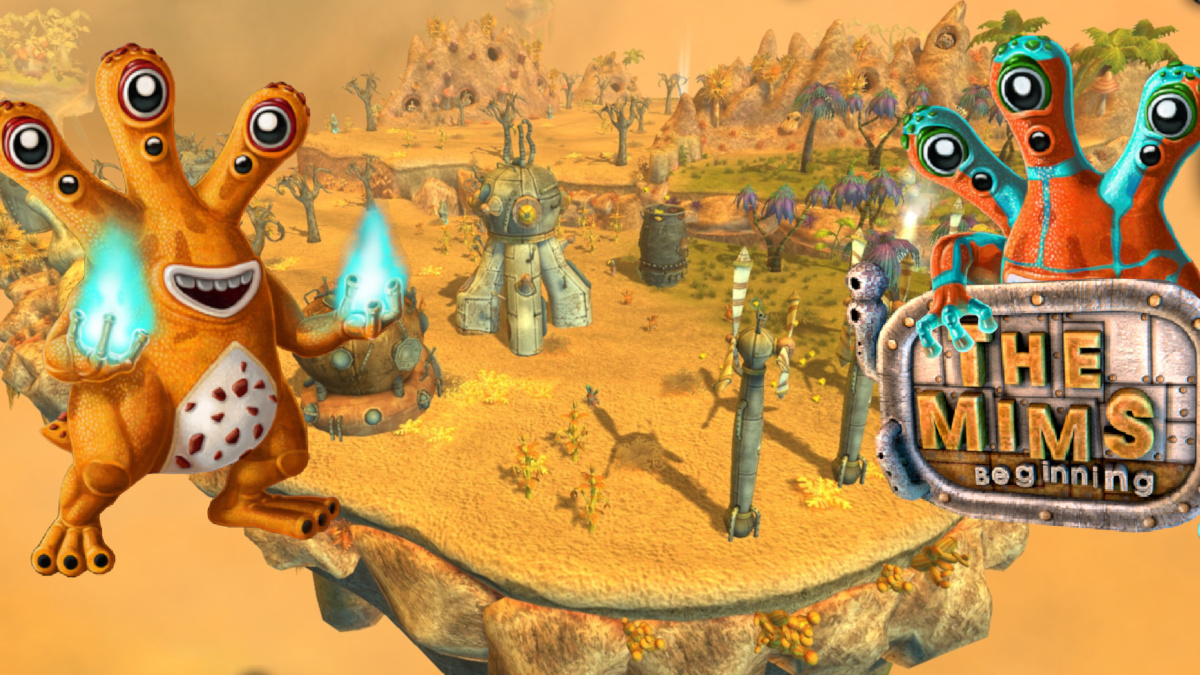 The Mims Beginning is a god-like strategy game from Squatting Penguins that has you attempting to aid a transient group of aliens who have crash-landed on a series of small, habitable lands. You have been chosen by the group to be their god and it is up to you to do everything in your power to get these funny little guys to the end goal of rebuilding their ship so they can find a new homeworld. Filled with B-tier humor and some pretty basic civilization-building mechanics, this is a title that doesn’t hold up compared to other titles in the genre, but still has enough charm and simplicity to offer an experience that some will probably thoroughly enjoy.

After leaving their own homeworld and setting sail across the great, black sea known as space, they come across trouble as their ship is bombarded with meteors, stranding the majority of the Mim people in stasis bubbles floating through space, with a lucky few landing on tiny areas of a planet they can attempt to survive. While searching for the proper parts to repair their ship, they also will need to recover their DNA orb that holds their people’s essence necessary to reintroduce themselves onto a new home planet. Through this journey, you will be working with plants and animals to create an economy to sustain yourselves, as well as fighting off pests and predators to ensure survival. Although this story is secondary to the game as a whole, it isn’t a story offering enough to allow you to get engrossed in this setting. Alternatively, the dialogue, though inspired heavily from other wacky character groups like the Minions or the Rabbids, allows for just enough charm for you to feel for the characters enough to work towards this goal.

Gameplay consists of collecting energy from fruits that you can spend as a currency for producing more building and advancements. These plants can be found in the environment or planted, but eventually end up in your extractors. The other form of spendable currency are gems, which can be earned through pillaging rocks in the locale, or through the sale of domesticated livestock. You can raise a few different types of animals, each of which offers a sale price in the space market. Electricity is the final piece of the puzzle allowing your economy to chug along and building to operate properly and is ascertained through windmills. This three-way system makes for a simple economy that can be understood easily. Although nice for new members of the genre, it isn’t a system that is going to excite anyone who is a veteran of god-likes or strategy games.

Upgrades can be found through biolabs and science buildings and allow for things such as making the transition to newer, better livestock, as well as upgrades for your Mims themselves. Other buildings like garrisons offer other ways to upgrade your Mims into more specialized positions to take on whatever obstacles you find on each planet. Natural disasters must be overcome as well, allowing for a bit more divulgence away from the monotony at times.

End objectives are present through each level of the story mode to allow for progression. All of this helps make the story mode feels a bit deeper, and I found the endless mode present to offer an experience that made me want to jump in. Without the objectives and cutscenes, you won’t find playing through the basic loop satisfying.

PSI powers can be used to aid your people, in classic god-like style, giving you the option to do things like make your people happier or launch enemies away with a bursting strike. Fire is used to burn away plants and obstacles in the way of wind power or building progression, as well as several other useful powers. This mechanic offers up something else for you to do in a more hands-on manner while most things are running on their own but isn’t deep enough to make you feel like you are playing something other than a city planning simulator.

The graphics in this one are definitely rough and the game is lacking some serious polish. This isn’t something that will be a deal-breaker for everyone, but cutscenes regularly show as buggy messes where characters are floating off the ground as they move, as well as load times between cutscenes and gameplay being something that makes you question whether the game has frozen or not on the regular. I never had any major bugs or crashes that ended progression, but the game is seriously lacking in this department as a whole.

All in all, The Mims Beginning is a serviceable god-like that allows for a bit of a laugh here and there and plays as a serious time-killer. As is customary in games from this genre, you can waste hours if you are taking your time and trying to do everything for each level, but the game isn’t worth all that time, unfortunately. Unless you are someone who adores the Minions and Rabbids and also happens to like strategy building titles of this variety, then you will probably find this to be an unpolished, boring experience taking too much of your precious time.

The Mims Beginning offers a humorous take on the god-like genre through Minions-esque characters, but a shallow story, rough graphics and performance, and basic strategy gameplay drag this title down through the depths of space.