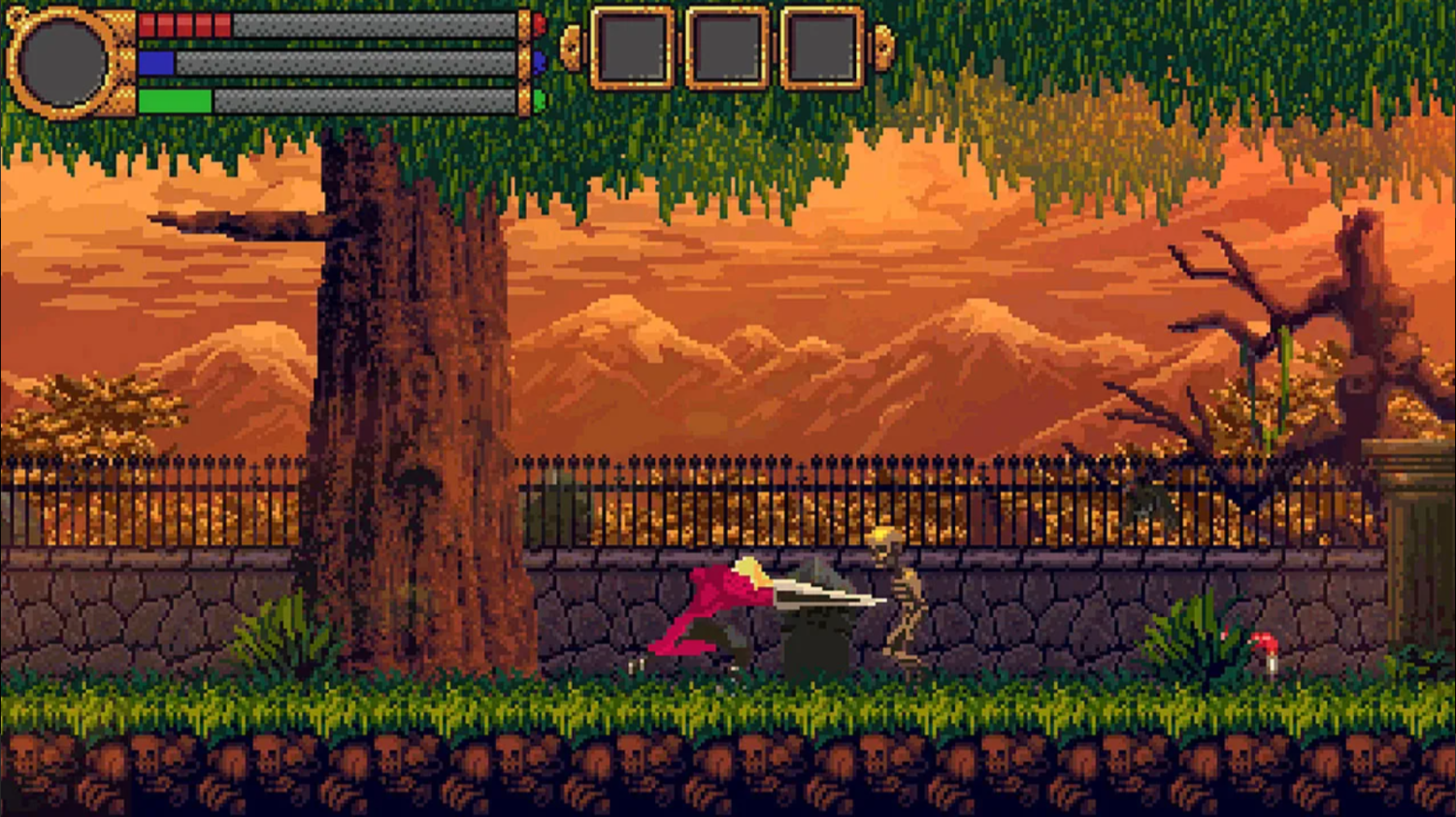 All dark colours and 8-bit graphics, The Skylia Prophecy evokes gaming history’s earliest action platformers from the title screen. It tells a classic fantasy story, set in a medieval world plagued by demons and animated corpses that it is up to you to destroy to preserve peace among mankind.

The game does have a backstory that explores more of the context and your character’s driving motivations. This is presented to you as a big wall of text at the very start, so you could miss it if you’re not paying attention. It won’t cause too many problems, though. You can quite easily play the game hacking your way through the monsters without the benefit of it, fun though it is.

The world is further built up through interactions you have with villagers you encounter along the way. They don’t always say something worth absorbing, but they do offer some neat little details that ground the game within the story world. 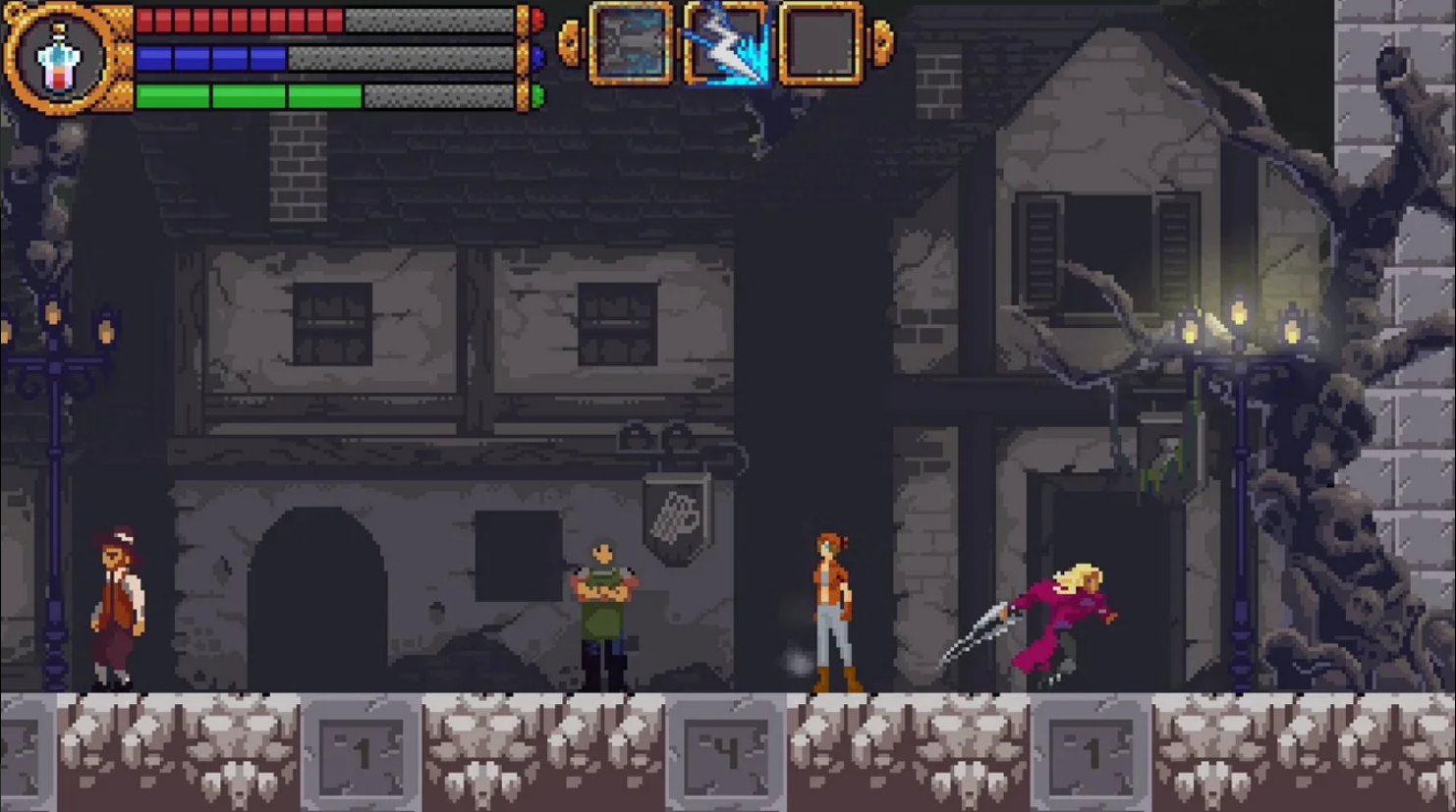 You play as Mirenia, an 18-year-old girl on her quest for redemption. The Skylia Prophecy opens most of the way through her quest and you have to see it through to completion with her. You explore the villages, swamps, forests, various classic landscapes, slaughtering demons in search of the fortress where she can cast the spell that will end it all.

The premise is familiar enough. The enemies are simple. The action is about what you would expect it to be: You have a sword and a handful of spell slots. As you defeat more enemies, you gain more health, strength and mana. It doesn’t tell you when you’re about to level up, so it comes as a pleasant surprise. You can purchase potions that replenish your energy. You can take on quests from villagers that will not only earn you money but also push you towards the next stage of the narrative. Save points are scattered throughout the game so you’re unlikely to have to replay much of your adventure if you die.

The bosses, and even some unexpected regular enemies, can be quite challenging. Their health isn’t visible, so victory can also come with a great sense of relief if you’re running low on life when it finally happens. 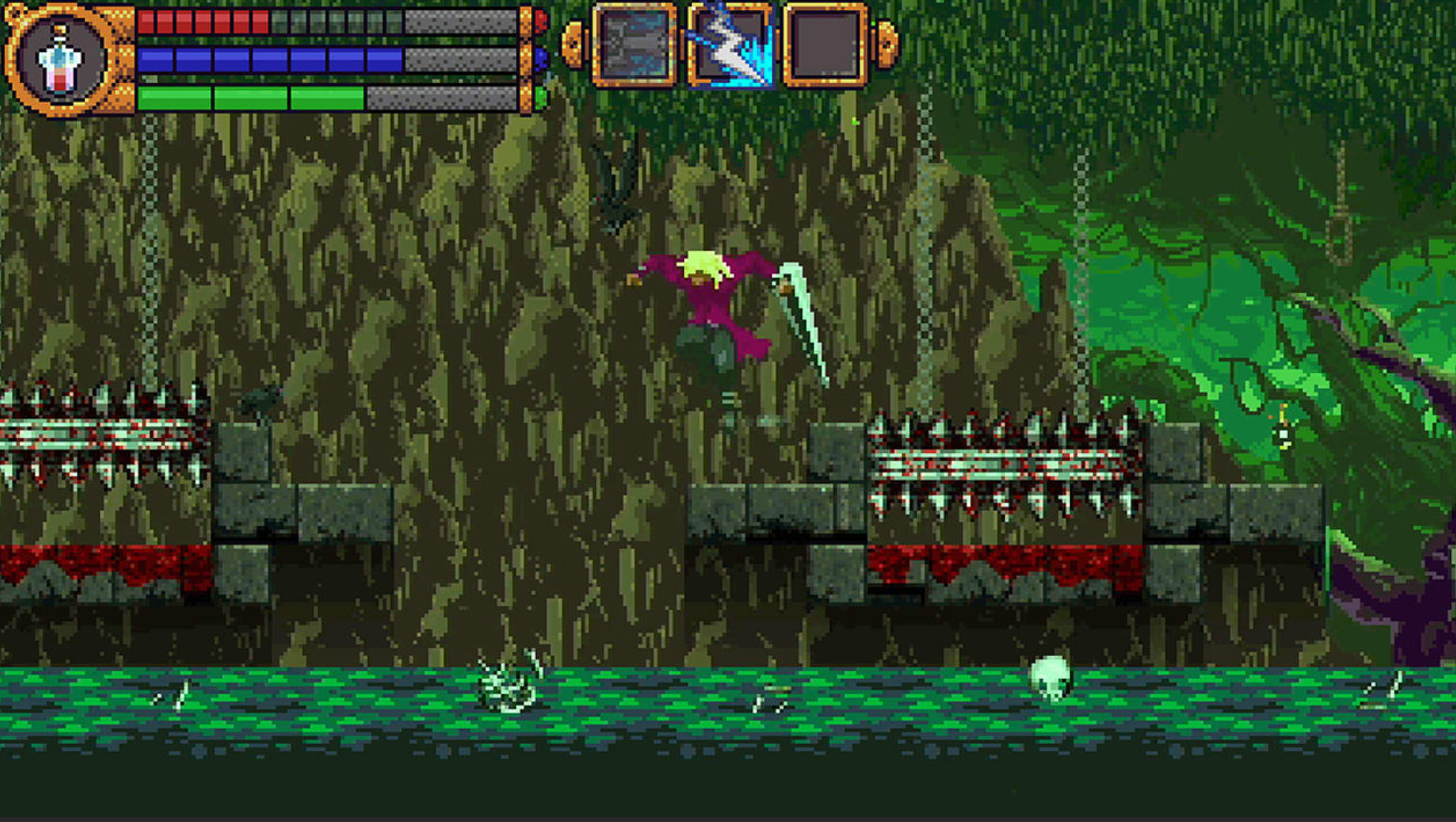 The Skylia Prophecy definitely feels like it’s designed to be challenging in this way, in the style of those brutal early arcade games we all remember so fondly. I’m not sure this game has quite struck that balance between gripping and viciously difficult, but it’s certainly enjoyable enough. The thought put into evoking that early style which, compared to the fluidity of more contemporary games, includes a bit of frustration makes it easy to forgive elements of The Skylia Prophecy that grate a little.

There are often points when a map would come in handy. On more than one occasion, I managed to jump off screen and lose my character altogether. But the little glitches aren’t at all game-breaking, especially not when you consider how low the price is.

A fun little fantasy platformer, The Skylia Prophecy makes for a charming throwback to the early days of gaming