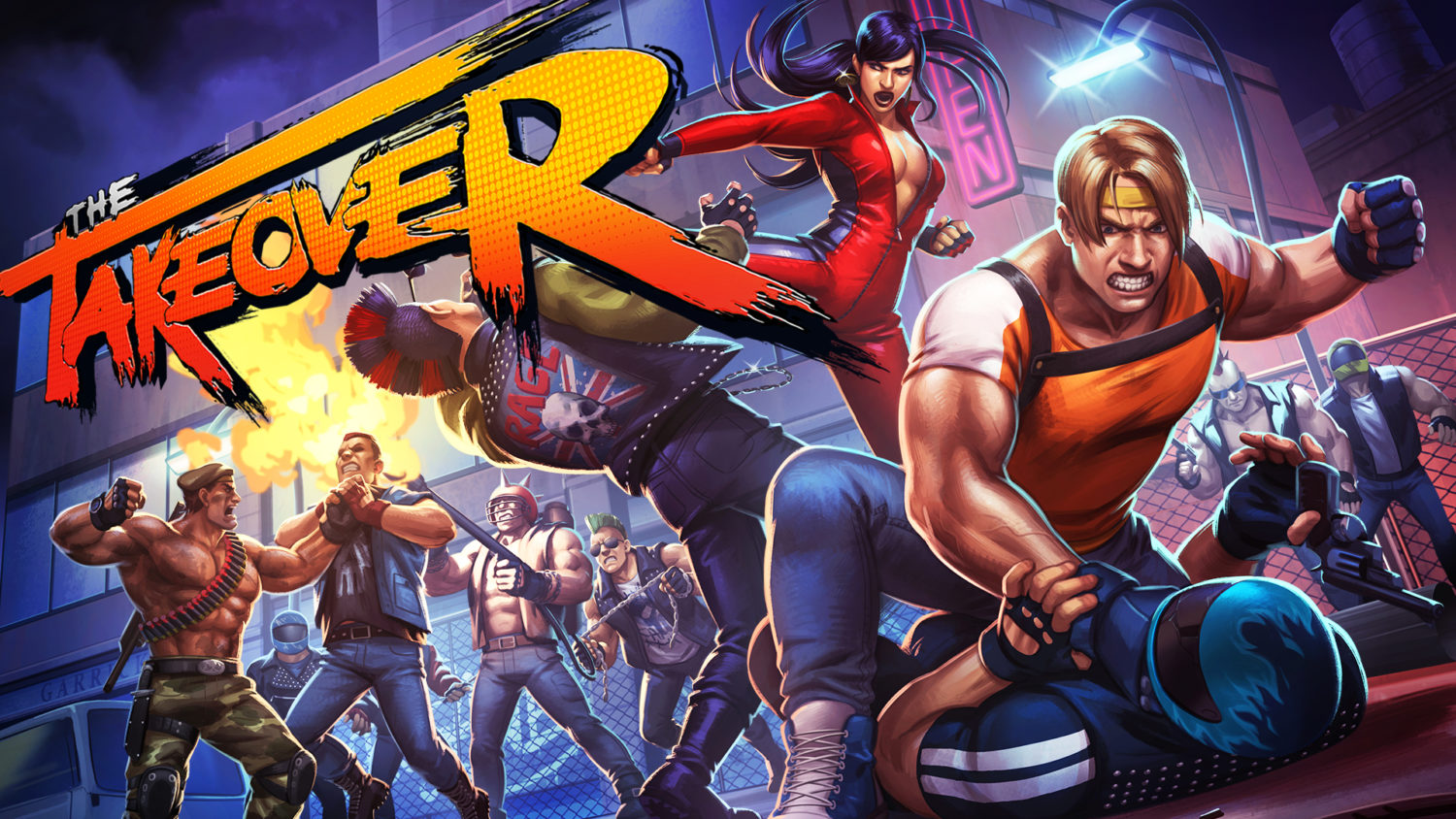 Each passing day feels like it brings with it a new addition to the eShop of a game that seeks to pay tribute to a previous era. However, they aren’t always as refined as The Takeover, which does a great job of admiring the past without sacrificing enjoyability for those who might not possess that same sense of nostalgia. Although, if you did enjoy side-scrolling beat ‘em ups back in the ‘90s, then find your shades and your black trench coat, because this game is for you.

The Takeover has a very simple plot, but one that nonetheless justifies the need to take to the streets and bash some heads. Steel Haven — the home to our muscular protagonists — is under siege from gangs who have realised they’re stronger together. As they’re wreaking havoc on the city, they kidnap the adopted daughter of policeman Ethan and his girlfriend Megan. It’s now down to them, and their beefy friend Connor, to get back their daughter and save their city from the villainous uprising. 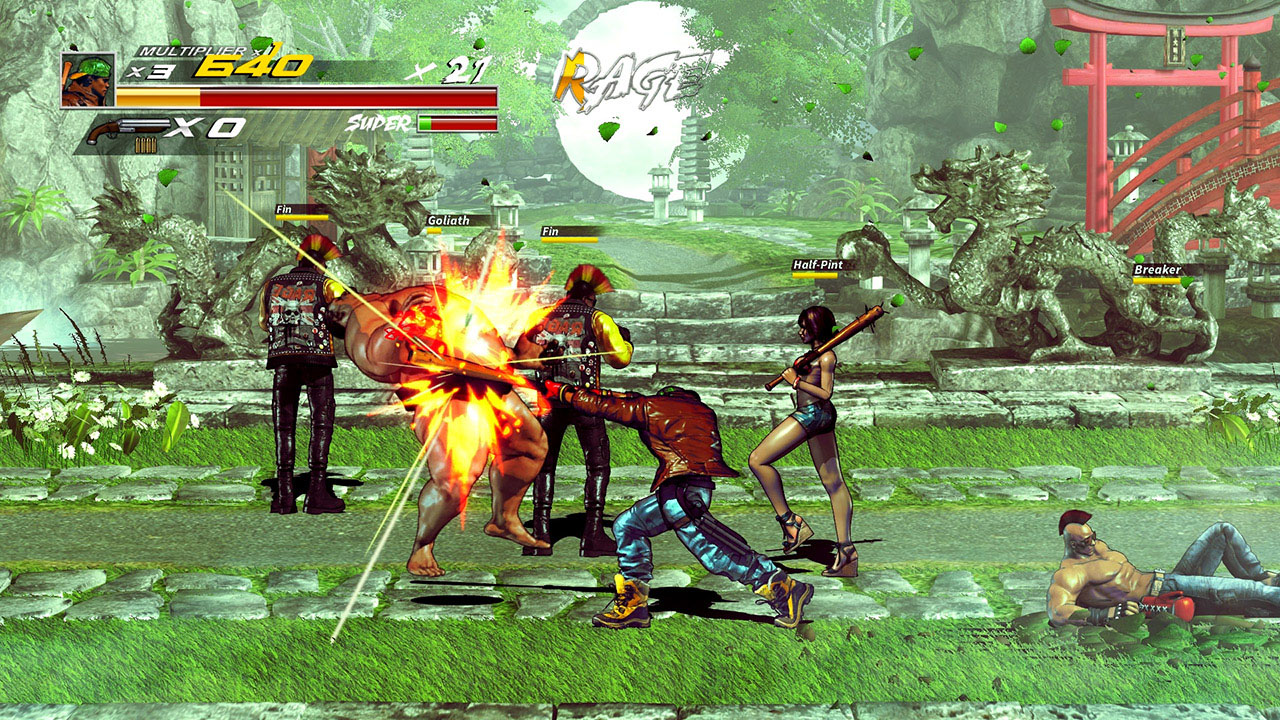 Each of the three playable characters you start with feel different to each other. Ethan is your traditional Jack-of-all-trades fighter that every game has, Megan is considerably faster than the others but lacks in power, and Connor is the powerhouse of the three. The controls are simple but there’s a surprising amount of depth to the gameplay. Both punching and kicking have their own button, so you can either create combos between them or mash your favourite, and then there’s a jump button, too. There’s also a special move that shaves off a bit of health (your health doesn’t regenerate), but it is great for dealing damage and giving yourself some breathing room.

All of the characters have ranged weapons for dealing damage from a distance, and you can find the ammunition spread sporadically throughout the different stages. Much like the ammo, throughout the game you can also find weapons that can be used to batter people with, or alternatively, they can be thrown. You’re also able to grab enemies, and from there, there are various potential outcomes depending on what buttons you press or direction you give, ranging from simply hitting them to full body slams. Finally, there are two meters: a super move meter and a rage meter. When activated, the rage meter allows your character to do even more damage for a short period of time, which is particularly useful when you become overrun by enemies, which happens frequently. 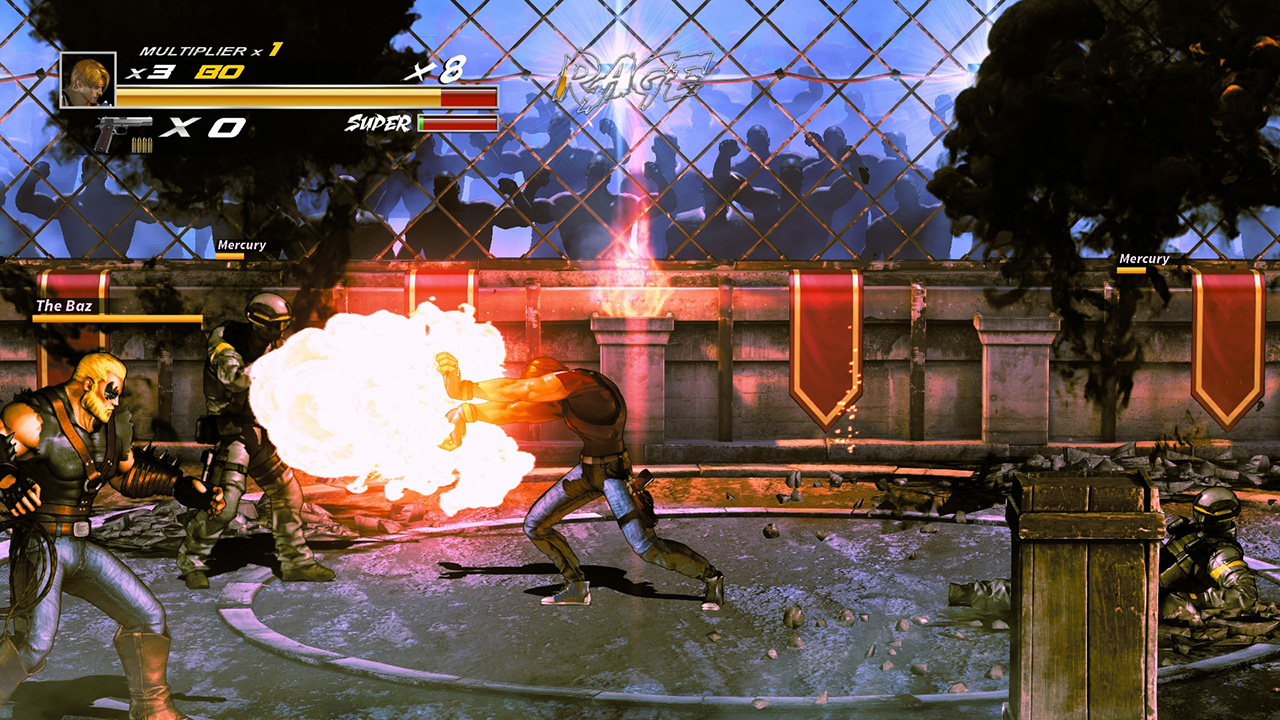 The game has seven chapters which are each broken down into three stages. With auto-saving after each stage, The Takeover is considerably friendlier than the games that inspired it. However, if you do still want the challenge, there’s a hard mode that has less saves and more enemies, though there’s an easier mode, too. Naturally, as the game progresses there’s the expected increase in difficulty, but it never gets too challenging — if it does, it’s easy enough to call in a friend for local co-op. It’s just a shame that online play isn’t possible, especially at this current time. On top of this the only other major flaw the game has is there is only one extra unlockable character.

One of the bolder things The Takedown has to offer are the two levels that particularly differ from the rest of the game. I won’t spoil what they are as they took me by surprise when I first saw them, but they’re both incredibly well-executed, perfectly maintained within the game as a whole, but adding that satisfying fresh streak of gameplay. 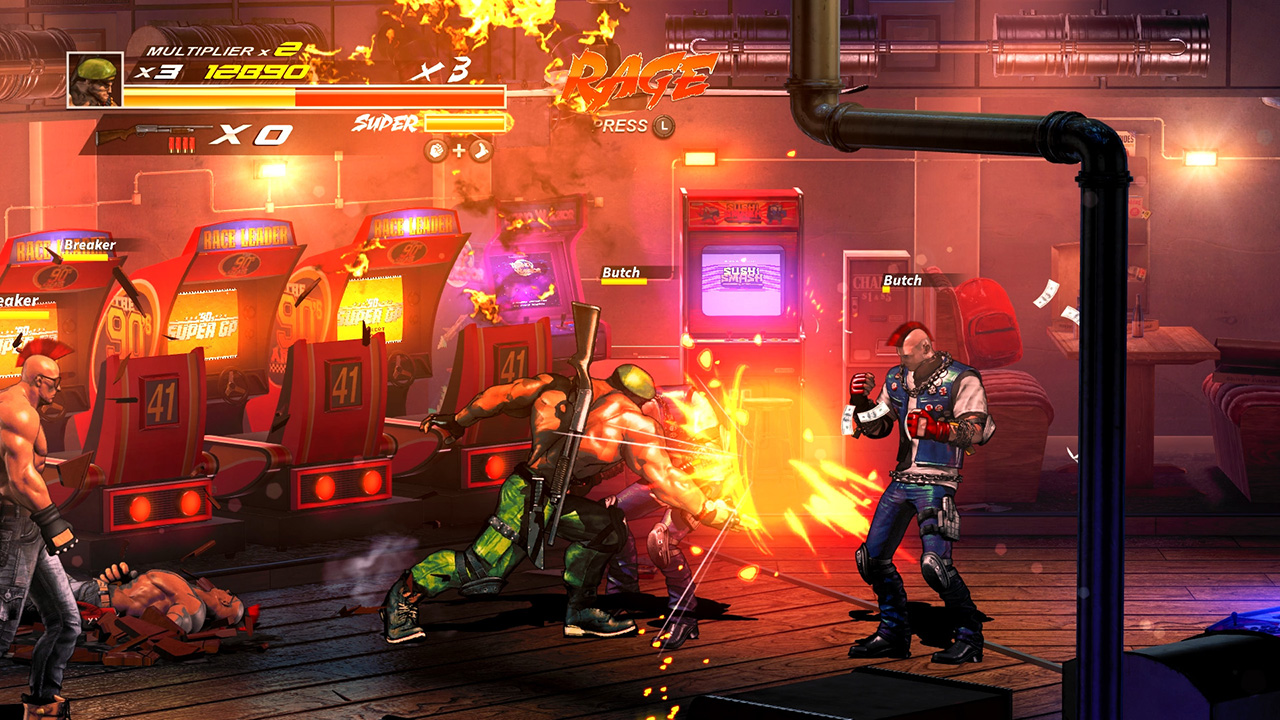 Across the seven chapters, there are a variety of good-looking environments you’ll fight your way through. Instead of going down the traditional route of emulating the look of the original games of this style, The Takedown looks sharp, striving for a look of realism. The graphics are well-suited to the backgrounds, however, the character models don’t look anywhere near as good — unfortunately they give off the sheen of a melting waxwork. What really complements the game — elevates, even — is the score, capturing the essence of the ‘90s brawler.

Despite a few minor grievances, like the lack of online play and odd-looking character models, The Takedown is a must-play for any fans of the genre. If you’re looking for something in your life to replace the recent Streets of Rage 4 then you’ve found it here. The depth of combat was surprising, but the risk taken with the two unique stages keeps the game fresh and enjoyable.

If you’re a fan of side-scrolling beat ’em ups then look no further than The Takeover.