By Michael Laverty  •  2 years ago

The VideoKid is a frantic arcade-style game which centres around the actions of jumping and throwing VHS video tapes, whilst simultaneously avoiding familiar vehicles, reminiscent pedestrians and other obstacles. The goal is to get the VideoKid to Jessica with only one life, on your quest to deliver the video tapes safely to mailboxes.

You will naturally notice patterns within the game as time goes on, but it can be overwhelming with so much going on during the initial attempts at such a fast pace, enough to perhaps put some gamers off. The game slightly adjusts its offering for each of your attempts, with a slightly varied pattern of hazards. Once you become accustomed to it however, you will begin to navigate your way to higher scores. 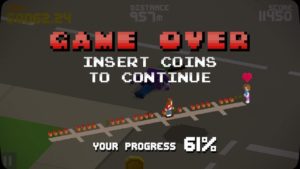 The VideoKid is a game that might be best played with a small group of friends, swapping the controller on each turn to get the high score. The high score concept is one area that the game could easily be improved upon. While you get a score for each attempt, there is no local leaderboard available or method of sharing high scores to taunt friends outside of the Switch’s native screenshot and social media sharing facility in what is a massive miss for this game.

Collecting cash does not contribute to your score and this could change your approach to the game, offering replay value, depending on whether you strive to just beat the game, get a new high score or save up to buy new tricks or earning yourself that elusive ‘Biscuit Guzzler’ character, as the shop assistant serenades you with cool dude talk. The game is littered with recognisable faces that need no introduction throughout your attempt to meet with Jessica. 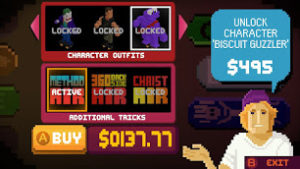 There are two big frustrations within the gameplay. Occasionally, you will experience poor depth perception, leading to an indirect misjudgement in timing, as you traverse through areas of the game such as the underground pipes, even though coins are neatly and logically led out to guide you. The other is the speed you must react to a stimulus, which at times is just unfair, giving you no time to be in a position to progress past the sudden danger. This is especially true at some crossroads which will induce anxiety as you approach them.

There are a few power-ups which do help negate these issues somewhat, providing a rapid video tape throwing ability, super high jump or speed boosts gratefully positioned next to threatening crossroads. As a result of the aforementioned issues, the game encourages defensive play, simply because it fails to provide an adequate reward for the risks you take. 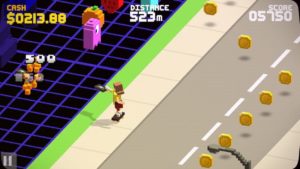 The VideoKid is a solid game based on the 1980’s. While it might be a short-lived experience played solo after a few hours, it could be the centre of a more enjoyable experience by passing the controller amongst friends, although the lack of a leaderboard to taunt them on is a huge mind-boggling miss. For avid arcade fans, it promises to be a satisfying title to add to your Switch collection, and the CRT style aesthetic is lovingly produced in possibly one of the best recreations in modern gaming. The game is best enjoyed with the use of a D-Pad, in handheld mode if possible and Indie studio Pixel Trip Studios have produced a solid game with The VideoKid. It’s a title that you simply can’t complain about too much considering the reasonable $4.99 price.

The VideoKid is a solid game based on the 1980’s. While it might be a short-lived experience played solo after a few hours, it could be the centre of a more enjoyable experience by passing the controller amongst friends, although the lack of a leaderboard to taunt them on is a huge mind-boggling miss.