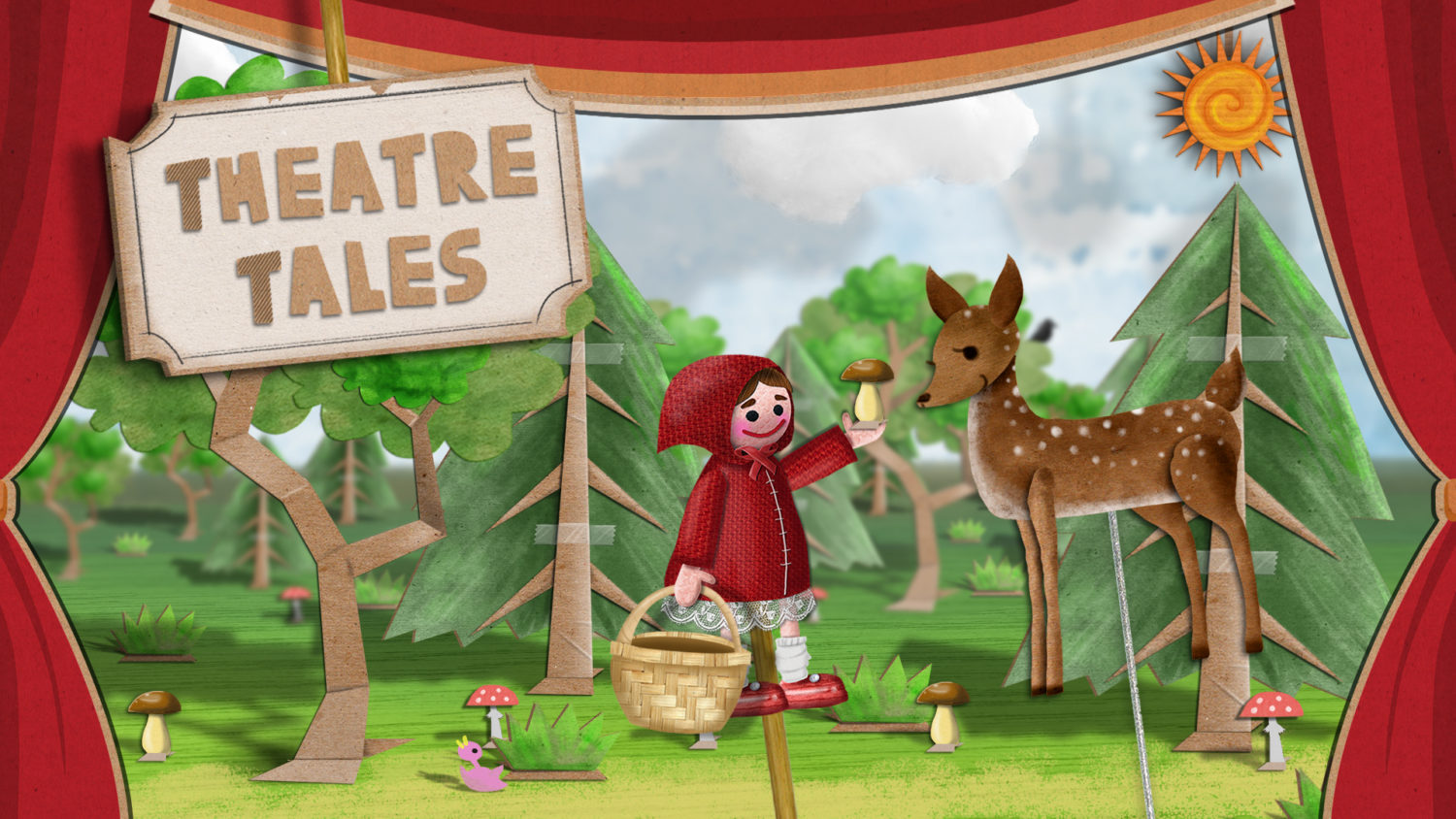 Theatre Tales is an app for children that aims to recreate the joy of puppet shows. It mostly succeeds, but only for about five minutes. Then you’re done. Show’s over. Head on home, kids.

The show itself is actually kind of cute. You start with access to Little Red Riding Hood, or at least a modern, family-friendly take on it. No people get eaten here. No animals get shot or sliced open. The moral of the story is subsequently lost, but it’s probably best we don’t lean on video games to provide life lessons to our children, anyway.

The characters in the story are moved around as if puppets on sticks, their arms and legs dangling freely and swaying as they’re moved around the screen. The backgrounds are laid out as if created with construction paper, complete with Scotch tape in areas. 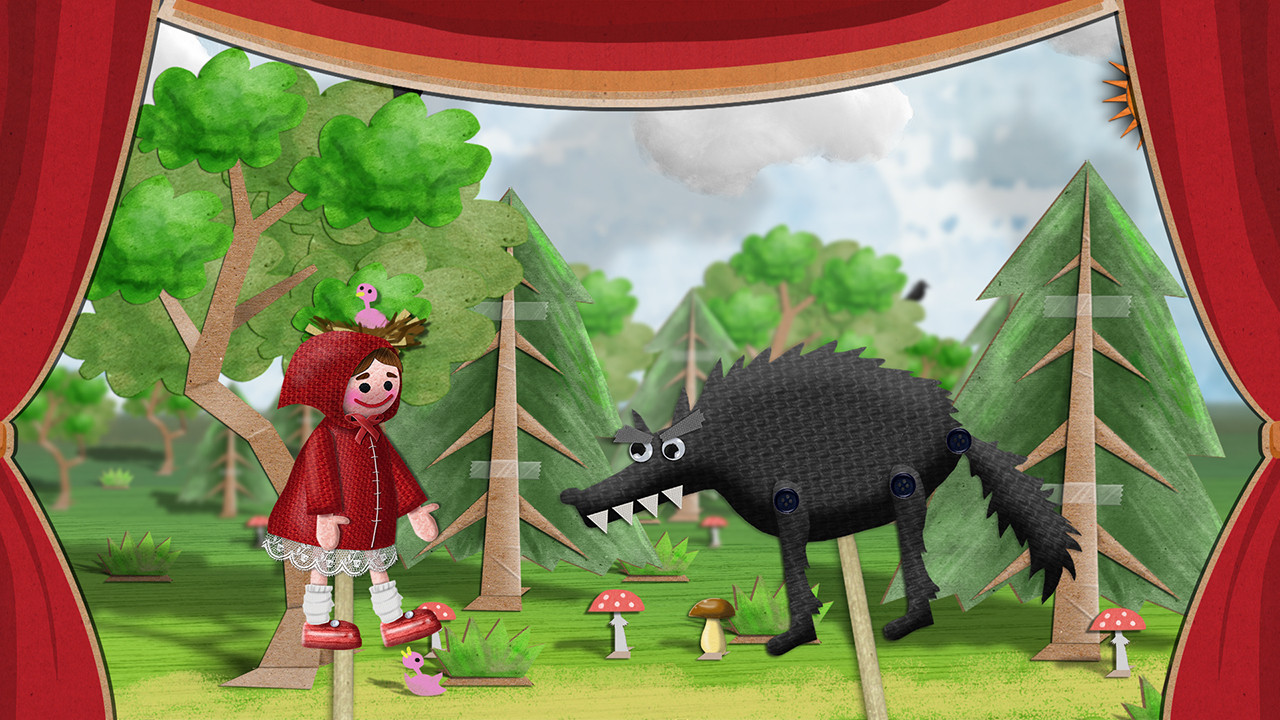 Visually, it comes together well. There’s no dialogue or text, however; just the occasional grunt or scream presented for comedic effect. Kids will likely need to know the story already in order to piece together what’s going on. My seven-year-old son knows the tale of Little Red Riding Hood and he had fun playing through it a couple of times.

Gameplay consists of simply moving a character to a specific object and pressing A to interact with it. Grab a pot, open a cupboard, pick up an apple…that kind of thing. These all serve to move the story along, although there are a few minigames included to provide something else to do. They’re all very simple, of course—baking bread, shooting a target with a pop-gun, etc.—and the game gives you all the time you need to complete them. Red isn’t going to die because you took too long to hide in her wardrobe. 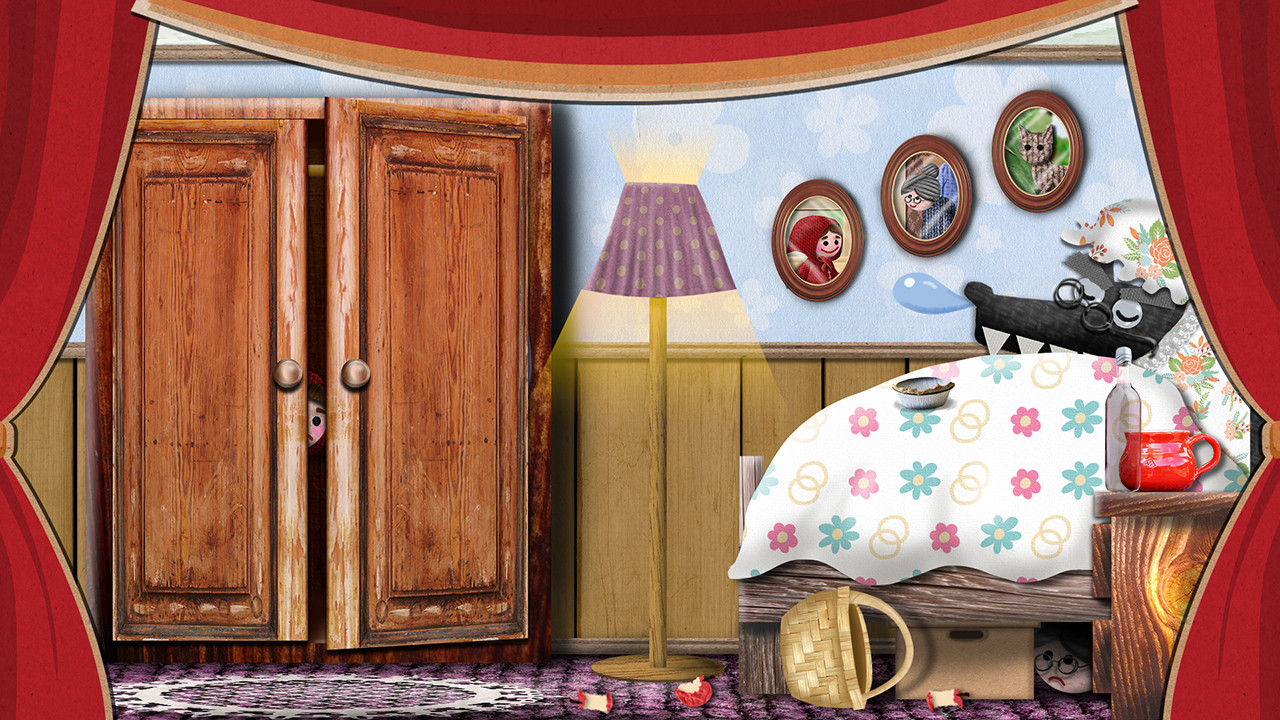 It’s all innocent enough, but there are two major problems with Theatre Tales. The first is that the controls make no sense. You move the characters with the right joystick and you execute commands with the A button which, of course, is also on the right side. This isn’t a twitch game that demands quick actions, of course, but why all the input must be controlled with the right thumb is beyond me. 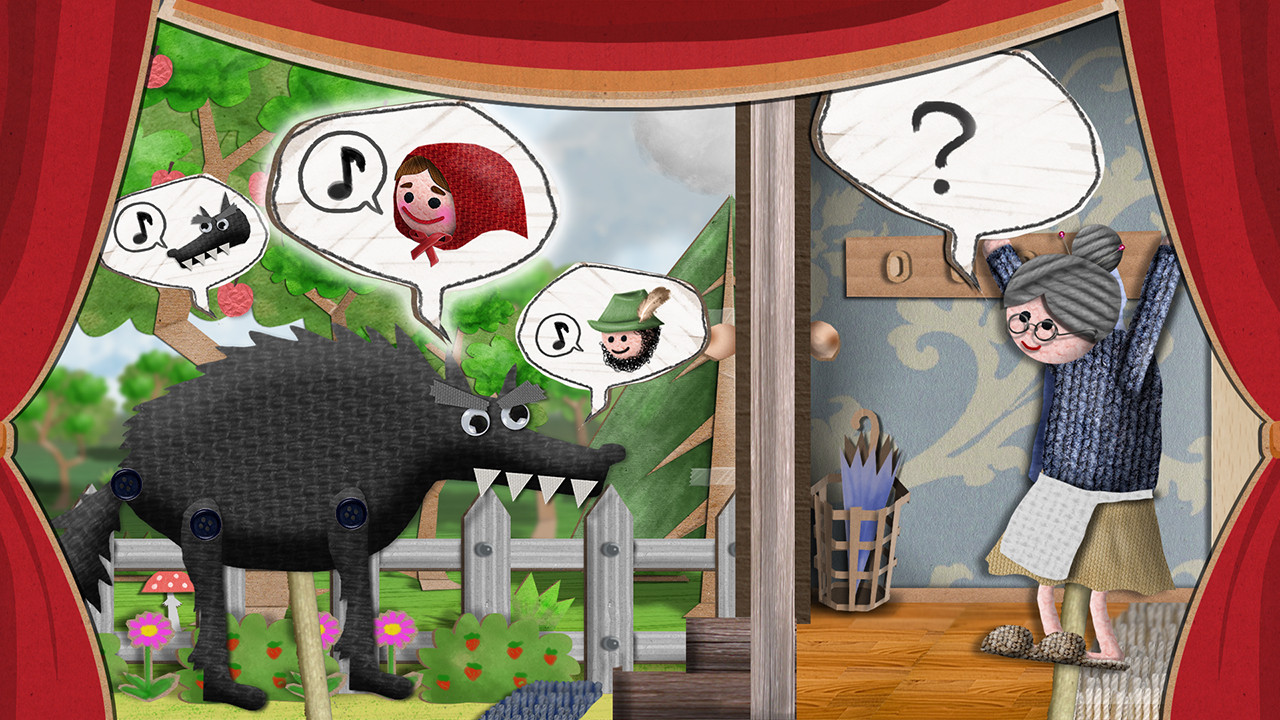 Then comes the big problem; the game begins and ends with Little Red Riding Hood, a story you can finish in less than five minutes. Other titles are teased (Cinderella, Thumbelina, Hansel and Gretel, etc.), but they’re not playable, and there’s nothing in the game to indicate why. Are they unlocked once you finish the previous story? No. Can you buy them via the ticket booth that’s displayed in the story selection screen? No. So, why are they there? Well, we confirmed the other stories will eventually be available as free DLC, but there’s no timetable for their release. In that case, why tease them now? And it’s cause for concern that Theatre Tales was released as an Apple TV exclusive in June of 2016, last updated in September of 2016, and still offers only Little Red Riding Hood. By the time any DLC is released, you’ll likely have long since deleted the game from your Switch.

It’s especially annoying because Theatre Tales is promoted with the promise of “great scenes from famous fairy tales.” That’s tales, plural, and it’s simply not true. The description at Nintendo also promises gamers can “make your own stories with free play mode!” Again, not true; there is no free play mode at the time this review was published.

It’s unfortunate that Theatre Tales was released in this unfinished state because it could be a fun, charming game for young players. In its current version, however, it’s a big disappointment…like buying a volume of classic fairy tales with the pages of all but one story glued shut. The game’s only $1.99, but you’ll still feel cheated after Red gets her happily ever after.

But hey, at least someone did.