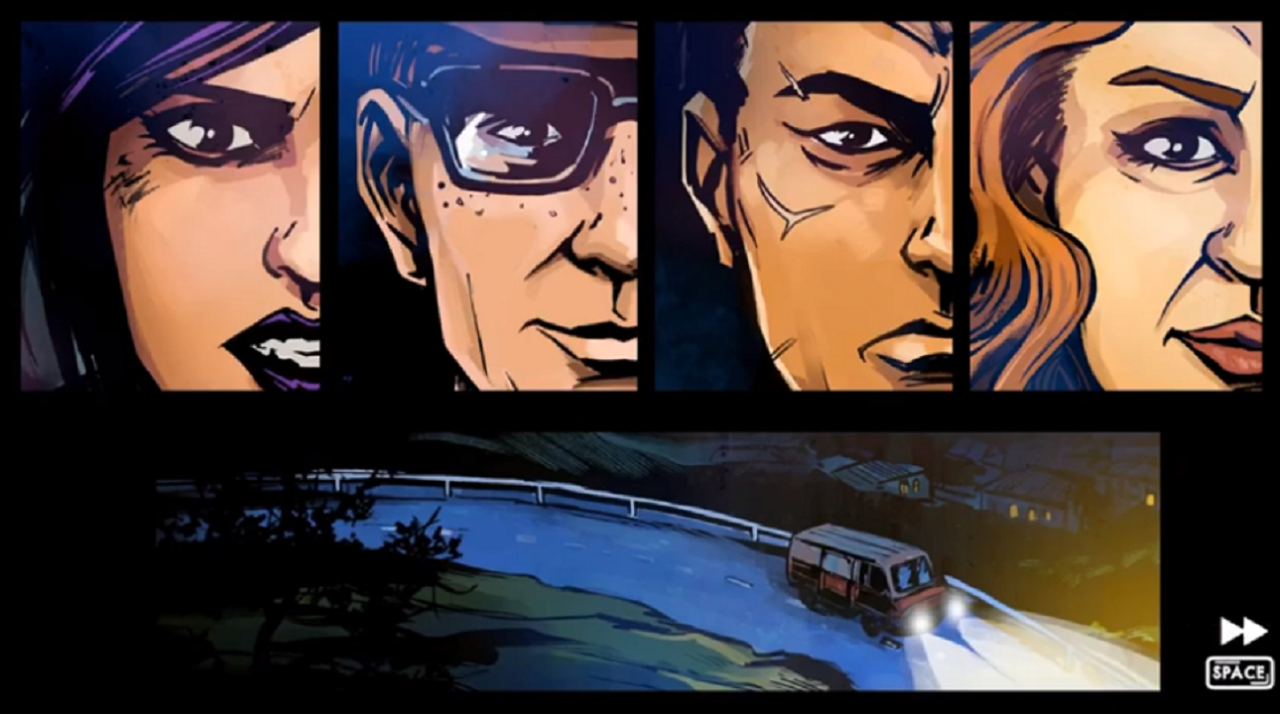 Thief of Thieves: Season One is a stealth adventure title that has you taking part in international heists as part of a team of proteges who are learning under the world’s top thief. The story was originally written by famed The Walking Dead author, Robert Kirkman, and this comic to game adaptation takes a lot of the Telltale Games formula and expounds on it a bit with the stealth mechanics and added gameplay features. Even though this is also a best-selling comic, this is definitely one of Kirkman’s B-tier franchises, and that shows through from top to bottom in this title as well. Featuring all four parts of the game’s original episodic release, you will be able to move through the story from beginning to end on the Nintendo Switch.

Playing as Celia, a stylish thief-in-training, you are picked up at the airport by a special agent who is questioning you about your recent movements. Luckily, your mentor, Redmond, is in your ear helping you along. From here, you start working through past events in a True Detective style flashback sequence to show how you got to this point. As you lie to the agent, you see what actually lead to your recent excursion to Europe, where you joined up with a group of fellow burglars to gain riches and fame. This tale is one that is filled with a lot of what you would expect from the crime thriller genre of storytelling but is an enjoyable ride, nonetheless.

As part of the storytelling, you have dialogue choices you will be making that will impact the direction of the story. With a bit more style added to it in its actual art direction, as well as more influence on what is happening immediately in front of you, the choices and writing feel superb. This is definitely one of the strong suits for this one. Unfortunately, it’s light on positives.

Once you get through the comic book style storyboards and move into the level you will be playing in is when things start to fall apart a bit. You are given various objectives, whether that be to stake out a location and gather information to actually entering a place and stealing an item. Moving through the level with stealth is the key in Thief of Thieves: Season One, as being discovered in most instances is a reset for the stage. As you move around and start to get a feel for the mechanics you will find a serious lack of polish.

The enemy AI is extremely janky. Moving past enemies from the shadows and crouching behind objects allows you to move through areas, but at the most random times, you will be spotted. I entered a location and began picking the lock of a side gate, while in disguise, and a random employee in the same uniform somehow saw me from across the map and came running towards me with two guards to end that run at the stage. Also, being discovered and then trying to lose detection is a mechanic I still don’t quite understand. One time I was seen and dodged behind a car, where a guard ran right up next to me and somehow couldn’t see me because I was plastered to the side of the car so close. I lost him, and as he walked away, he immediately turned back around to detect me and ended the stage as I was caught on the second try. This makes the stealth portion of the game, which is most of what you are doing, really hard to get the feel for.

Your movement is also impeded in unfortunate ways. You can crouch for stealth, walk around normally, and run. However, when crouching, which is the stance you will spend the majority of your time in, for some reason doesn’t really work while moving through doorways. You get caught on the small, raised portion of the doorway, and have to stand back up most of the time to gain entry. This means if you are around people and trying to be quick about getting through a door and into cover you are almost always spotted immediately and caught. This hurts the most crucial portion of the game, and when paired with the wonky AI it makes for a seriously bad stealth title.

The art style is going for a cel-shaded, noir-style feel, and even though in the storyboards this comes across nicely, when applied to the gameplay segments it is just kind of ugly. Too thick of dark lines on the character models and some pretty glaring performance issues make for something that is just not that nice to look at.

Thief of Thieves is a title that has a good story and great writing but fails to take the next step into gameplay. There’s a reason companies like Telltale used to stick to just being a movie with button prompts, and that is because they knew that gameplay wasn’t their strength. If Skybound is moving into that similar slot of story titles, they should probably do the same, or make some serious changes, as this one is a janky mess once you leave the comic book and dialogue portions.

Thief of Thieves: Season One offers a good crime thriller with superb writing, but is bogged down by janky AI and a serious lack of polish in its gameplay sections. For those fans of the comic or those looking for just the story aspects you might have something worth looking at here, but stealth fans should look elsewhere.