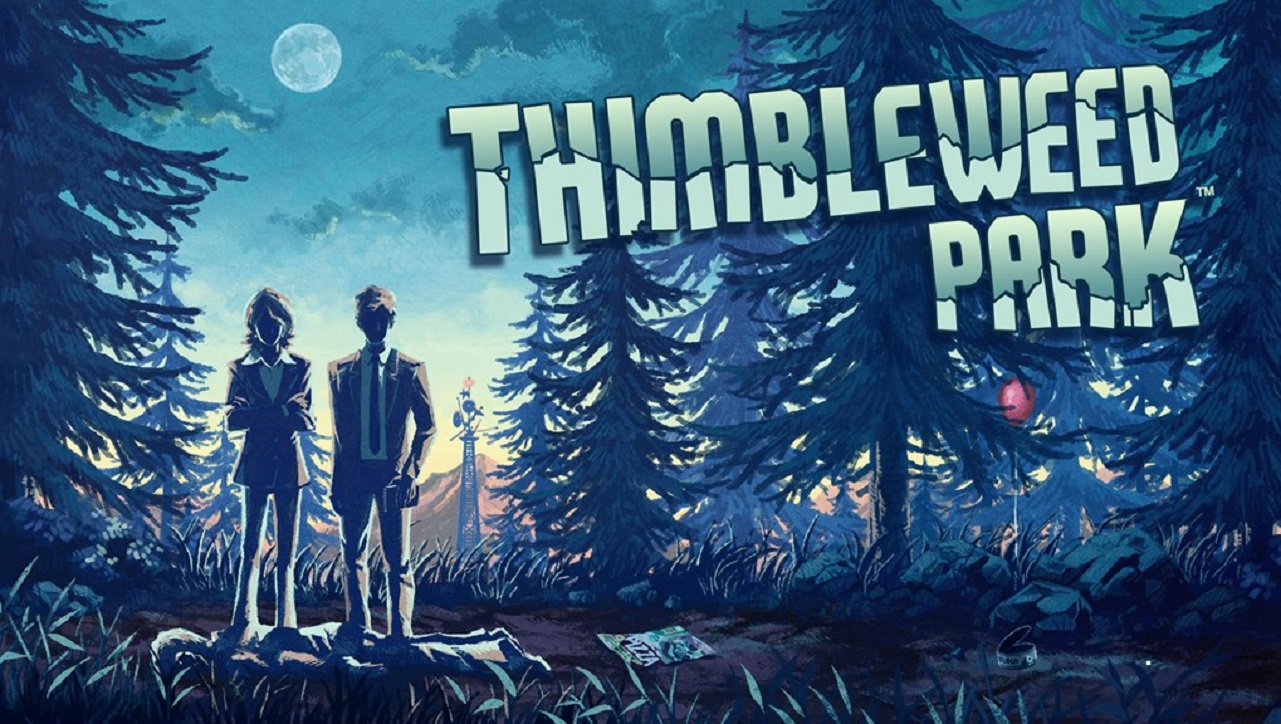 “In a town like Thimbleweed Park, a dead body is the least of your worries.”

To fans of point and click graphic adventures, the names Ron Gilbert and Gary Winnick are well-known. Maniac Mansion was one of my favorite games on the NES, and largely responsible for introducing me to the genre. However, the style was tough to pull off on consoles sans a mouse, so it’s amazing sequel, Day of the Tentacle, made its mark on the PC. I mention both of these games because Thimbleweed Park (a Kickstarter triumph) is a “spiritual successor” of sorts to them. It has a similar eccentricity, coupled with the necessity of juggling multiple characters.

The story is…kind of all over the map. It takes place primarily in 1987, although flashbacks have you hopping back through time some. It starts as a detective tale with the investigation of a murder, but quickly descends into outright oddball territory. I get the sense that in trying so hard to create a comedic tale, the developers did so at the expense of some cohesion. The controllable characters are hit-or-miss, and they way they work alongside each other even more so. I had a similar response to some of the voice acting, although it did grow on me overall – there are a few standouts. All this leaves the real star of the game the town itself.

A once thriving town, Thimbleweed Park’s population is down to double digits, with many of the shops boarded up. Exploring the moonlit locale, in all its pixel art glory, is a joy. The detail in some areas had me beaming like a kid, as I scoured the backgrounds and foregrounds.  There’s plenty to keep enthusiasts busy as well. Whether reading some short stories in the library (hundreds), dialing your way through the phone book to hear individual answering machine messages, or going on a literal pixel hunt for specks of dust, every nook of town has something. How much you’ll enjoy these depends on your affinity for Lucasfilm’s earlier classics.

Like the main characters, the bit players vary in quality, but they add a real flavor to the town. Experience with the creator’s prior games will make you appreciate some of them even more. One of my highlights is just listening to the residents shooting the breeze with each other – in a small town everyone knows everyone. Such chatting is often unnecessary, but dialogue choices like this are a real kick for those who appreciate a talkie adventure.

The puzzles are challenging, but you won’t find yourself stuck in a permanent dead end. A casual mode helps those less versed in the genre, and an optional in-game phone support system can be a convenience. My advice is to try to use the latter in moderation. The temptation to seek help the minute you get stuck lingers, but that’s part of the experience and fun. Thankfully the hints start off somewhat cryptically, to nudge you without giving full-blown spoilers. I should add that the hard mode has more content, so even if you beat the game casually, do revisit it again.

It’s not ideal playing a game like this with more traditional controls, but the Joy-cons perform admirably enough. A touch slow perhaps, but this isn’t a game where speed is needed – or, in truth, even desired. The touchscreen works as well – I used a capacitive stylus rather than risk getting fingerprints all over the screen.  Outside of the odd stutter when transitioning with the cursor at screens edge, I’ve no real control complaints.

Even with its shortcomings, genre fans will definitely find much more fun than not with Thimbleweed Park. But if you’re not already a fan, I’ll acknowledge that this probably won’t be the game to change your mind, with its muddled plot, loose end finish, and quirks inherent with the genre. You might be better off looking at one of Lucasfilm’s earlier releases. I’d love a port of Day of the Tentacle Remastered (w/Maniac Mansion) on the Switch. In any case, Thimbleweed Park is a fun game, and I’m excited to see what’s next from the developers.

Even with its shortcomings, genre fans will definitely find much more fun than not with Thimbleweed Park.